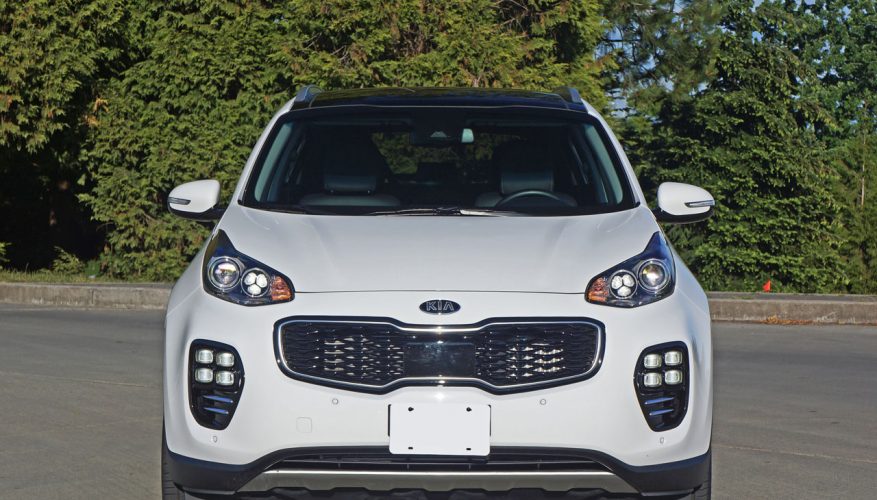 By: Trevor Hofmann
I can never figure out why some Kia models don’t lead their respective segments in sales. Obviously the brand has an image issue, something it’s been working hard to overcome with stunning new designs, impressive quality, features galore, and competitive driving dynamics, but even if these attributes weren’t shining as brightly as they do, the value offered in vehicles like this Sportage should have buyers queuing up in front of Kia showrooms just so they don’t miss getting one.

In an effort to win yet more customers to the brand, that compact SUV has been totally redesigned for 2017, and I tested a top-line Sportage SX to see how it measures up. Opting for the SX means Kia’s trademark black mesh grille gets flanked by auto on/off directionally adaptive projector HID headlamps with integrated LEDs and auto high beams, two quads of LED fog lights at each corner, an aluminum-look skid plate below, 19-inch machine-finished alloys with black painted pockets down each side, LED turn signal-enhanced power-folding heatable side mirrors featuring visible blind spot monitoring and lane departure warning tech to go along with rear cross-traffic alert and autonomous braking, “satin chrome” alloy trimmed door handles, a black glass rooftop, aluminum-tone roof rails, unique LED lightbar taillights, twin stainless exhaust pipes set within another aluminum skid plate, yet more satin chrome aluminum-look trim joining glossy black accents from front to back, and that’s only on the outside.

Are you reading the wrong review? Am I describing an Audi? BMW? Mercedes-Benz? Lexus or Infiniti? Maybe an Acura? No, if it were any of these it would have half as many features, cost thousands more and wouldn’t be backed by a five-year comprehensive warranty.

Instead, welcome lights hidden behind the door handles brighten and the mirrors unfold when approaching the new SX, while proximity access gets you inside after passing over aluminum doorsill plates, or if loading something in back a beautiful polished aluminum cargo protector plate becomes visible once the powered liftgate lets you in by just standing next to it for a few seconds with key fob in pocket or purse, while back in the driver’s seat pushbutton ignition gets things started, at which point strategically place LEDs offer subtle backlighting.

As it is the 2017 Sportage SX can be had for just $39,595 plus freight and dealer fees, my Polar White painted version featuring black hides, but if noir’s not your thing you can have the seats upholstered in particularly rich looking two-tone Canyon Beige leather (which is more of a milk chocolate brown). Then again you might not be into white, so take your pick from Sparkling Silver and Mineral Silver (medium grey) or optional Scarlet Red, Storm Blue, Black Cherry or Modern Bronze. Nothing else is optional in this top-line trim, but then again I can’t think of much that’s missing.

At the risk of sounding like I’ve merely been listing items from a brochure, my objective is to help you appreciate there’s little reason to pay more for a premium branded compact SUV. On that note the Sportage SX drives brilliantly too, the aforementioned paddles making the most of a fairly quick shifting six-speed automatic when set to Sport mode, the little powerhouse of an engine responding to throttle input like few in the class, and those are fuel-hungry V6-powered anachronisms that hardly match this Sportage SX’ 11.9 L/100km city and 10.2 highway rating, which despite the high output is only a fraction thirstier than the base 181 horsepower model’s consumption.

It would all be wasted if the Sportage SX didn’t handle well, but a tight body structure, independent MacPherson strut front and multi-link rear suspensions, performance shocks, and my tester’s 245/45R19 all-seasons made for a thoroughly enjoyable package that was as capable of carving up canyons as cruising along the highway or touring around the city. The ride, while firm in an almost Germanic way, was totally comfortable on all but the worst road surfaces, and even then it was more than bearable, while big four-wheel discs, enhanced with ABS, stability control and most other electronic driver aids, provided strong stopping power despite this top model’s substantive 1,813-kilo (3,997-lb) curb weight.

While the driver’s seat could use a little more lateral support to keep up with available performance, I found its 10-way adjustability extremely comfortable and powered lumbar soothing to the lower back, plus all seating positions but the centre rear are form fitting and quite spacious. Really, there’s a lot of leg and knee room for such a small SUV, and ditto for headroom that’s made even taller thanks to the glass roof.

One of the reasons we love our SUVs is their cargo carrying capacity, the Sportage having no shortage thanks to 798 litres (28.9 cubic feet) behind the rear seatbacks when the cargo floor is raised or 868 litres (30.7 cubic feet) when lowered, or after dropping the 60/40-split rear seats down you can access up to 1,565 litres (55.7 cubic feet) with the floor elevated or 1,703 litres (60.1 cubic feet) when it’s recessed, the former position providing a nice flat load floor all the way to the front seatbacks. What’s more, the cargo floor is nicely finished with high-grade carpeting and the previously noted protector plate is a real thing of beauty, this level of luggage compartment luxury normally only found in a few of those premium brands, while the SX also comes standard with a cargo net plus a retractable cover that’s housed in a very high quality removable aluminum cross member, Kia providing a handy spot below the cargo floor for stowing it when not in use.

That’s more interior space than the outgoing Sportage, by the way, this due to an extended wheelbase and slightly more overall length, although this new model is identically wide and exactly the same height. It is heavier, mind you, and a bit down on engine output compared to last year’s SX, or at least the claimed rating is lower. It certainly didn’t feel lacking, and I wouldn’t even consider buying the old one compared to this new one. Don’t get me wrong as last year’s Sportage was still a better choice than many of its rivals, but Kia has really stepped things up with this fourth-generation model and it appears I’m not alone in my thoughts.

So far the 2017 Sportage has earned Essen, Germany’s Red Dot Design Award and Hanover, Germany’s iF product design award, plus even more importantly an IIHS Top Safety Pick Plus rating when in top-tier SX trim, whereas all previous generation 2016 Sportage models earned five-star safety ratings from the NHTSA, so therefore the new 2017 model should follow suit.

Something else that should impress is first overall placement in J.D. Power’s latest 2016 Initial Quality Study for the Kia brand (yes, that means it beat Porsche, Lexus, Toyota, Honda and all the rest) and another number one for the Sportage in its “Small SUV” segment, something the Korean manufacture hopes to duplicate in three years when this new model gets surveyed for J.D. Power’s 2016 Vehicle Dependability Study, where the old version currently underwhelms at just below average. Kia shouldn’t worry too much, however, as it’s sitting pretty with a fourth-place ranking out of 17 mainstream volume brands on Consumer Reports’ 2016 report card on reliability, while most importantly, new SUV buyers, which in the end are the only judges that matter, have been snapping them up at a much faster rate than before, with 2016 calendar year-to-date sales up 82.5-percent when compared to the same six months last year.

Most of these new Sportage buyers aren’t paying anywhere near $40k, incidentally, with the well equipped base LX starting at just $24,895 plus freight and dealer fees. No matter the trim you get plenty of value, my Sportage SX easily capable of comparison to those luxury utilities mentioned earlier despite its humble origins. It was a week well spent in an exceptionally good SUV, and one I’d do over in a heartbeat.
©(Copyright Canadian Auto Press)
Car Shopping Tools