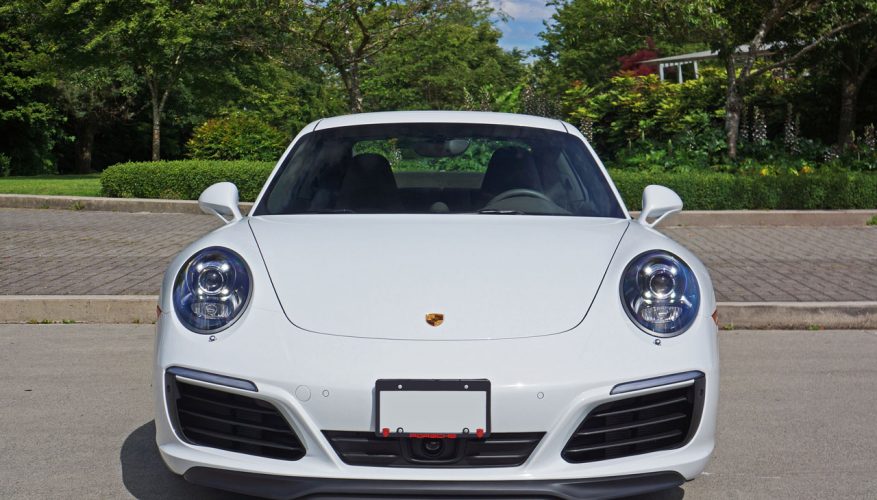 By: Trevor Hofmann
Want a great deal on a Porsche turbo? That’s easy. Buy nearly any new Porsche, as most are now turbocharged and all will soon be.

Scripted matte black “turbo” lettering on the backside of a 911 or via decals gracing the rocker panels has always been cause for pause amongst sports car enthusiasts, the car once revered as the fastest production model on the planet, but now Turbo is merely a trim line at Porsche. It’s still duly given reverential respect, especially when the big serpentine “S” adds suffixal support, but for the sake of those who simply love driving great sports cars we need to put all of this forced wastegate induction into perspective.

Like all automakers, Porsche sells into a highly regulated world experiencing ever more stringent fuel economy targets and emissions standards, and turbochargers are being widely adopted as a way to deal with both issues while maintaining and in some cases even increasing performance. The new 3.0-litre (2,981 cm³) H-6 falls into the latter camp, the base model’s 370 horsepower (or rather 365-hp when adjusting for the obsolete PS/Pferdestärke rating system Porsche still uses) and 331 lb-ft of torque a considerable 20 hp and 44 lb-ft bump over last year’s naturally aspirated 3.4-litre flat six, the new S sporting 420 horsepower (414 adjusted) and 368 lb-ft of torque for an identical 20 hp increase and even better 58 lb-ft advantage over its predecessor’s 3.8-litre six, while full twist is achieved lower down the rev range at just 1,700 rpm for more immediate response off the line. All this from a smaller powerplant that saves up to 12-percent in premium fuel, my tester getting a claimed 11.0 L/100km city and 8.5 highway. What’s not to like?

Like I said a moment ago, purists might be grumbling but performance enthusiasts are applauding Porsche’s more efficient brand-wide engineering (the former group of diehards is still bellyaching at the loss of air-cooled boxers). Even its entry-level Macan is boosted by exhaust gases, although most 911 buyers hardly care about the new VW-related four-cylinder upstart or any of the V6 or V8 mills found in the Macan, Cayenne and Panamera, these models accepted as necessary funding mechanisms for their beloved sports cars. Journalistic integrity causes the need for open mindedness, however, so therefore I’ve learned to appreciate each Porsche model for being one of, if not the best in its given category, but no matter how it ranks against competitors the 911 has long held my heart.

Time spent with the new refreshed 2017 model has reinforced this sentiment, a car that’s easily the best of its forebears let alone anything to ever wear the Württemberg and Stuttgart (stud garden) coat of arms-derived yellow, red and black horse and antler crest, and I only drove the Carrera 4S that merely delivers second-tier engine tuning of a possible six, some 160 horsepower shy of the most potent 911 Turbo S. Even so, the C4S’ straight-line performance is addictively quick, Porsche claiming 4.2 seconds from standstill to 100km/h with the upgraded twin-disc clutch enhanced seven-speed manual, 4.0 seconds with the automated PDK, and 3.8 with the latter when upgraded with my tester’s Sport Chrono package, this being the first Carrera model to ever achieve sub-4.0-second status. Porsche certainly gives buyers good reason to abandon their adherence to the DIY shifter (the lack of a clutch pedal in any of the Turbo trims or the GT3 RS being another), while the subtle turbine whine combined with a faintly muted albeit still characteristically guttural flat-six sound from behind the firewall constantly reminds that Porsche’s engineering prowess will never let tradition stand in the way of progress.

Additionally, those willing to risk all will be glad to know the base 911 is now capable of a 295 km/h (183 mph) top speed, and the Carrera S 308 km/h (191 mph) when the manual is chosen, whereas my C4S PDK is claimed to be good for 303 km/h (188 mph), although hanging onto my license matters more than knowing this firsthand so I’ll take their word for it.

That PDK is a masterful bit of electromechanical kit, featuring an intensely quick, positive shifting dual-clutch design that’s still surprisingly smooth unless the clever new 918 Spyder-inspired steering-wheel mounted drive mode dial is rotated past “O” (default) and “S” to the “S+” setting, at which point the shifts are appropriately more abrupt, albeit nothing near racecar-like. Alternatively there’s an “I” position the lets you apply individually programmed settings, or you can hit the centre Sport Response button for a 20-second adrenaline dump, this Starbucks Doubleshot-spawned “press to pass” feature engaging Sport Plus mode, dropping the PDK to its lowest available gear, maximizing boost and throwing all thoughts of fuel efficiency under the proverbial bus.

The PDK’s greener side might even be more mind-blowing, however. Along with the usual fuel sipping auto start/stop and brake regeneration systems it manages near CVT levels of virtual gearing, this latest PDK capable of engaging adjacent gears simultaneously while slightly slipping both clutches in order to achieve an effective gear ratio in between. Say what? It sounds like a recipe for burning through pricey clutch material, but apparently this isn’t so, the result of finding the optimal “gear” ratio said to improve performance as well as reduce fuel economy and emissions, the latter down to an average of 169 g/km in the base model with PDK, and 174 g/km in the S/PDK, which compares well to 202 g/km for the old S/PDK.

C4S’ all-wheel drive, which has now been upgraded to Turbo specs (the trim level, not the engine), improves traction at takeoff and through fast-paced curves, the latter moments where you’ll appreciate yet more investment to enhance steering reaction, feel and feedback. It never left me guessing about available grip, the process of adding load to the outside wheels wonderfully progressive, and eventual rear wheel slip as predictable and precise as one could hope for, while the car’s hind end squats brilliantly when burying the throttle on exit, but not to the point of making the front 234/45ZR20 Pirelli P-Zeros light and non-engaging. I should note there’s a PSM Sport feature that basically shuts down the electronic safety net for what’s effectively a 305/30 disintegrating drift mode, so if you’re brave (or stupid) enough it’ll provide as much fun as your talent allows or alternatively red-faced ego-busting tail-swapping embarrassment. Reportedly there’s a “residual PSM support” feature that’ll save your backside (and the car’s) even if “everything” is supposedly turned off, but being that I didn’t get into trouble I’ll never know how well it works.

The C4S’ handling is actually quite neutral most of the time, which is amazing considering its front/rear weight distribution has been pushed further backwards than before, all the turbo plumbing adding 35 kilos (77 pounds) over the old 3.4-litre mill. This is probably why Porsche included standard PASM (Porsche Active Suspension Management), which while automatically lowering the ride height by 10 mm (0.4 inches) at speed also adapts damping levels to road conditions instantly. I won’t likely ever be able to tell you what a 1970 Chaparral 2J feels like when its second engine-powered fan sucks all the air from under the car so it literally hoovers down the racetrack, but this C4S has got to be close. Making matters even more interesting, the Sport package upgrade now includes rear-axle steering from the Turbo and GT3 for even greater high-speed stability during lateral transitions, not to mention a half-metre smaller turning circle at low speed. Continuing on the theme of absolute control, the standard brakes are ridiculously capable, making me wonder how outrageous the optional ceramic composite rotors must feel.

It would simply be wrong to introduce so much advanced performance without updating the Carrera’s styling, so Porsche gave this 991/2 model a classic nip and tuck that includes the brand’s now signature quad of LED driving lights integrated within new headlamp clusters, a more aggressively penned front fascia with redesigned LED fogs, new elegantly simplified door handles, a cool new vertically louvered engine vent which actually forces cold air into a complicated array of three separate intakes that feed the engine’s intake plenum and twin intercoolers via massive plastic ducts and a heat exchanger (the hot air gets siphoned off through separate exhaust ports in the rear fascia), plus new sculpted 3D taillights boasting a quadrant layout comprised of longer LEDs as well as a classic light bar stretching between the two under the deck lid, and of course new wheels. To my eyes this is the most beautiful 911 since the ’90s-era 993, and possibly even more so.

The interior is mostly carryover, which is fine by me. The design is wonderfully minimal by today’s standards, quality of materials superb, and most switchgear above par, the only changes to status quo being the aforementioned steering wheel and its rotating driving mode selector as well as that latter item’s controls now missing from the slanted centre stack/lower console, although a new state-of-the-art seven-inch multi-touch colour PCM (Porsche Communication Management) infotainment system will be the more obvious addition to those familiar with previous 991s. The quicker reacting, more graphically stimulating, proximity-sensing PCM includes Apple CarPlay (but no Android Auto due to Google’s insistence of a near complete OBD2 data dump every time someone connects), online navigation with Google Earth and Google Street View, real-time traffic info that automatically adjusts your chosen route in the nav system, Wi-Fi, and more. To summarize, Porsche finally offers infotainment matching the rest of the 911’s goodness.

And yes, the renewed 911’s goodness is great, this Carrera 4S much more fulfilling than the Turbos I first tested when starting my auto scribbling career in the early aughts. As was the case then and still is now, you can almost double the 911’s $102,200 base price with extra goodies galore, my Carrera 4S already starting at a cool $126,100 plus freight and fees, so now along with those previously noted carbon ceramic brakes, Sport Chrono package, adaptive sport seats, Burmester surround sound, or for that matter colour-matched leather or carbon-fibre vent trim, planks of hardwood (retch), etcetera near infinitum, you can also add new active safety tech such as adaptive cruise with coasting capability and lane change assist to the upgraded standard list that now includes post-collision braking.

No matter how you spec it out you’re going to love the new 911.
©(Copyright Canadian Auto Press)
Car Shopping Tools