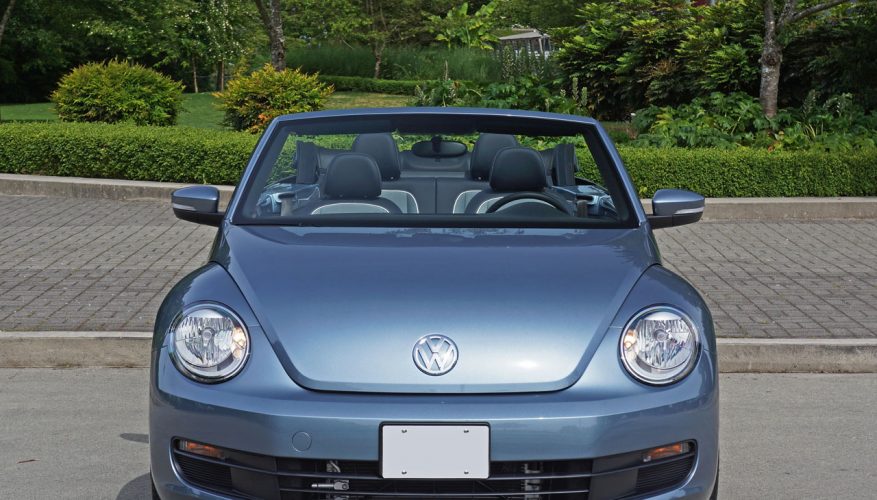 By: Trevor Hofmann
Volkswagen is known for its special editions, especially when it comes to the iconic Beetle. This year alone brings us the 2016 Beetle Dune, a crossover style soft-roader, and this new Beetle Convertible Denim, while the Classic carries over from last year.

I doubt anyone in Wolfsburg remotely remembers long since forgotten (except by yours truly) Levi’s editions of the Chevy Chevette and AMC Gremlin, but like every Beetle model the Denim pulls inspiration from yesteryear and this one gives a nod to the oddly yellow Euro-market “Jeans Bug” of the ’70s. The Beetle Classic just mentioned took my memory to new depths, reminding fondly of dad’s ’66 Beetle, my bro’s ’69, and a ’72 Super Beetle left in my care one particularly good summer by a pretty young woman who went on vacation.

This Denim edition has two tires stuck in the past and the other set rolling along in the present thanks to equal parts ’70s-era Britannia, Howick and Jordache flares (sans rainbow coloured pocket detailing) as well as any one of the 21 Men, American Eagle, Buffalo, Edwin, Guess, Jack & Jones, Hugo Boss, Mexx, Shine Original, UJ, etcetera straight legs that I pull on near every morning, not to mention my personal fave Philippines-sourced Hammerhead and Penshoppe brands. Most of us live in denim, so we might as well drive Denim too. That’s VW’s thinking, and I’m into it.

The Denim is only available one way, as a near top-line Beetle Convertible. You pass right on by base Trendline trim and forget about the leather-upholstered Comfortline before detouring around Classic White and Classic Black editions to end up at this Denim, a $29,350 model that comes in either the Classic White shade we just detoured around or as-tested Stonewashed Blue Metallic paint, both with dark blue denim-style cloth tops, not to mention the same retrospective 17-inch Heritage alloys with chrome plated hubcaps as the aforementioned Classic editions, which, as you can see from the associated photos, are not what my tester has bolted on. Rather, these 17-inch Turbine-style protective outer covers, a great look that mixes new with old, can’t be found via the brand’s online configurator, the brochure, or even the printed press material VW Canada included, although a quick glance at the U.S. retail site shows they come stock with the base S and sportier SE model down there.

While this initially seems like a decent description it actually misses the many nuances that make this Denim model special, such as the jean style change pockets sewn onto the inner side of each front bucket, plus the massive seatback “jean” pockets with crisscross red stitched detailing.

Having this much fun with a car might make a person concerned there’s nothing serious about it, but the Beetle Convertible Denim is too good for such sentiment. While I could go on about the quality of interior switchgear, all of which is top rate, or delve into that aforementioned infotainment system which is truly one of the best in the industry, from its speed and ease of use to its brilliantly crisp and colourful graphics, plus the cool proximity feature that pops digital buttons onto the screen as your fingertips get near, and the kudos continue, not to mention the slick powered top that quickly lowers or raises back up again at the touch of a button, what I like best about this most recent A5-based Beetle is how it drives.

It’s based on the previous generation Mk6 Golf, by the way, which to those in the know should immediately give it street cred. This means, as is the case with all VWs, that its suspension is fully independent, handling setup is superb albeit biased a bit more toward comfort than all out sport, and specific to this car its 170 horsepower 1.8-litre turbocharged four-cylinder’s get up and go is mighty, aided by a particularly swift shifting six-speed automatic with manual mode that makes the most of the engine’s considerable 184 lb-ft of torque. It’s truly a fun car through the corners while it’ll cruise down the highway at much higher than posted speeds if you dare, all the while mixing a comfortable ride with rock solid stability, the previously noted seats impressively supportive whereas even smaller adults relegated to the rear are provided adequate comfort. Fuel economy is rated at 9.6 L/100km city and 7.0 highway, which is quite good for such a nicely equipped sporty drop top.

As much as I like this blue jean Beetle a few of its features were a bit faded, the first issue being an audio system that was quite good with the roof up yet inadequately powered when attempting to enjoy rock and dance tracks with top down at highway speeds. I’m guessing the standard wind deflector may have reduced wind noise to the point the stereo didn’t distort, but it’s a pain to install, takes up the entire rear seating area and therefore remained in the trunk. Ditto for the clumsy tonneau that requires more finesse and/or strength than my upper body was willing to exert in order to click into place, so I left it in the trunk too.

That’s a lot of trunk space robbed by paraphernalia that wasn’t used, especially noticeable with a cargo compartment that’s already on the small side unless comparing it to other compact ragtops. I should mention you can drop the 50/50-split rear seatbacks forward for longer items like skis should you want to take this four-season convertible up to the slopes, where it should be quite capable as long as you stay on groomed runs.

I jest of course, although with all the active safety features that come standard, such as ABS-enhanced four-wheel disc brakes, traction and stability control, and the list goes on, there’s little the Beetle can’t manage. Volkswagen received a five-star safety rating from the NHTSA for the hardtop version albeit no rating for the soft top as it hasn’t been tested, but standard pop-up roll hoops are included so it should effectively overcome rollovers as well as withstand the same level of frontal and/or side impacts as its hatchback sibling.

As for reliability, J.D. Power gives Volkswagen a just above average score in its 2016 Initial Quality Study although below average marks in its longer term 2016 Vehicle Dependability Study that rates vehicles after three years of ownership, yet the brand did fairly well in the Consumer Reports’ 2016 report card on reliability by placing eighth out of 17 mainstream volume brands.

Beetle Convertible Denim buyers won’t care much about such cerebral concerns, this car developing more of an emotional attachment. I must admit to enjoying every moment behind the wheel, so possibly I’ve become too close to offer an unbiased point of view? If this is true then it’s more than worth its sub-$30k window sticker. After all, how do you put a price on affection?
©(Copyright Canadian Auto Press)
Car Shopping Tools