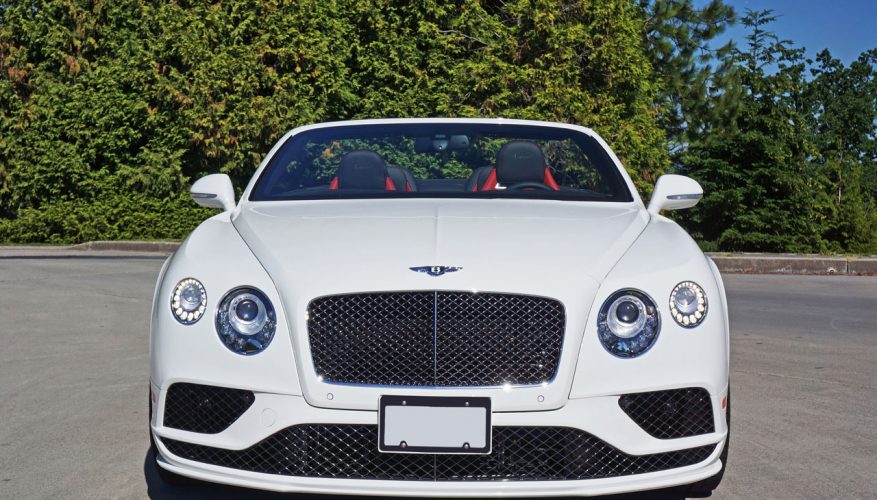 By: Trevor Hofmann
I’ve experienced some wonderful moments in Bentleys over the years, sometimes traveling to far away places to partake in previous generation Brooklands, Azure and Arnage models, the latter with legendary racer and quintessential gentleman Derek Bell at my side, plus more recent excursions in the Continental family of GTs, GTCs, and Flying Spurs, while also enjoying a few at home with family in tow. No matter where, with whom, or the Bentley model that prompted the drive, each experience was so all-encompassing and therefore so indelibly stamped into my limbic system that I’m immediately swept back into a given moment at the mere sighting of the prominent grille and Flying B emblem. So you can imagine how the senses overflow when actually getting back behind the wheel.

The three earliest names have long been replaced and the Continental-based models updated since I first got to know the good folks at Bentley Motors’ Boston headquarters (they don’t have a Canadian HQ), the large four-door Arnage having made way for the Mulsanne in 2010 and the big convertible and coupe effectively replaced in 2009 and 2011 respectively by the Continental GT and Continental GT Convertible (the latter more readily referred to as the GTC), at least until the Mulsanne-based Grand Convertible arrives next year and a two-door hardtop likely follows, while the entirely new Bentayga crossover SUV should soon be adding to Bentley’s bottom line in the same considerable way the Cayenne did for Porsche, albeit in a much more rarified luxury league.

Still, until we see the results of this new SUV venture the Continental series continues to be the Shepherd Loaf sourdough bread and D’Artagnan white truffle butter (or Echiré if you have a simpler yet still very refined palate) of the Bentley lineup, the GT coupe, GTC and Flying Spur responsible for the majority of sales (the Flying Spur no longer bears the Continental name yet it’s based on the same platform architecture and shares similar design elements), with the first two making up most available trims.

Bentley offers five GT trims and four of the GTC, the Speed just tested being at the very top of the convertible’s pecking order. A number of changes occur from the GTC’s most affordable V8 to the model tested, including outward and internal visuals plus modifications under the hood, the base model’s robust 500 horsepower eight-cylinder replaced with a particularly potent 12 that makes an already quick four-place convertible incomprehensibly fast.

To be clear I’ve driven quicker cars, but I can’t immediately think of one that combines the shockingly immediate response of the GTC Speed at takeoff plus its blistering pace and poise amid curves and overtaking maneuvers with such an oh-so sublime “Keep Calm and Carry On” British attitude. It would be downright anticlimactic if it weren’t so utterly dumbfounding, the twin-turbocharged 6.0-litre W12’s 626 horsepower and 607 lb-ft of torque managing standstill to 100km/h in a scant 4.3 seconds before a maximum speed of 328 km/h (204 mph), all manually controllable via new bigger, heftier steering column-mounted paddle shifters that extract everything the smooth operating yet instantly reactive eight-speed Quickshift automatic and rear-biased permanent all-wheel drive have to give; to be specific the AWD system defaults to a 40/60-split but will vary from 15/85 to 65/35 as conditions require.

All this makes the GTC Speed the “world’s fastest comfortable convertible”, or so says Bentley, but since the advent of the M-B S63 AMG Cabriolet-based Brabus 850 6.0 Biturbo Cabrio the “production” caveat needs to be added to the aforementioned claim. The only faster production four-seat drop-top I can think of is Porsche’s 911 Turbo S Cabriolet that sprints to 100km/h in a mere 3.0 seconds, which is amazing, but only offers a 2 km/h (1 mph) top speed advantage at 330 km/h (205 mph), and the passenger qualification should truly read two adults and two toddlers.

Porsches are wonderful, but if we’re choosing to go down the road of comparison it would make more sense to add BMW’s upgraded 600 horsepower M6 Cabriolet to the conversation and then we’re back at Mercedes and that just noted Brabus, so let’s just leave such competent albeit lower class riffraff alone and remember that those fortunate enough to purchase a Bentley aren’t so easily wooed away to a lesser brand just because some skunkworks engineering department managed to stuff more power behind their less appealing badge (if they were they’d all be driving Hellcats).

It’s as if 97 years of performance oriented luxury heritage is distilled into the very car I’m driving, my gorgeous Glacier White on stunning Hotspur and Beluga loaner being one of the most breathtakingly beautiful cars I’ve driven in a very long time, something that didn’t go unnoticed to passersby who inconspicuously lost their cool and stared openly, mouths agape, sometimes even pointing. Want to feel like a sports hero or rock star? This is your car, while a number of the 16 additional exterior hues will make it stand out even more.

Back to earth, what I love about the entire Bentley lineup is their total livability despite exotic classification. The GTC Speed is a car you can comfortably commute in daily, and then while on the way home snag some takeout at a curbside deli, pick up your laundry, grab a cool frappe via drive-thru, all before easily negotiating your penthouse parking garage, unlike most mid-engine supercars that are mere weekend play toys due to awkward ergonomics and challenging drivability.

Yes, the GTC Speed provides a level of comfort the low-slung variety can’t match, starting with one of autodom’s most supportive driver’s seats finished in some of the highest quality leathers made. Diamond-quilting and bold red and black colouring add a classic touch, while surrounding hides, piano black lacquered hardwoods, and bright metals immediately remind that Bentleys are not processed with the auto industry’s usual cost-cutting methods, but instead labouriously handcrafted to the point that every square inch is a work of art. Of course, pretty well every feature one could imagine is integrated within the cabin, some 2016 updates including a handful of new buttons, knobs and toggles, new LED illumination, additional USB ports, and revised infotainment, its electronic interfaces as good as anything available and better than most, but compared to the majority of premium cars they play more of a secondary role in the GTC.

Don’t get me wrong as its auto climate control will keep all occupants ideally comfortable, the integrated navigation will get you where you’re going accurately, and its superb audio system seems almost as powerful as its under the hood performance, but the GTC Speed’s finer details are enough to make a person weak at the knees, and that’s just when moving along slowly enough to notice.

Unless you’ve driven a Bentley it’s impossible to perceive how two and a half tonnes (5,500 lbs) can feel so light and nimble, the GTC Speed defying natural laws in its quest to provide near unflappable cornering control. Press it as hard as you dare and it quickly becomes evident there’s plenty more to spare, the big Bentley an unfathomably deep reservoir of performance. Again, even at speeds that should ideally be experienced on the track, a calm composure adds confidence, wind buffeting kept to a minimum and, with quick deploying fabric roof upright, sound levels more on par with a well insulated hardtop.

No doubt aerodynamics play a role, the 2016 GTC Speed receiving a modified grille along with a new front bumper and lower fascia incorporating larger, sportier black mesh intakes, plus front and rear fenders with more pronounced flair, the former incorporating new B-shaped chromed engine vents, a redesigned composite rear deck lid finalizing in a sharper trailing edge, a reworked rear bumper that wraps a bright metal moulding completely around its backside, and a rear diffuser that’s unique to the Speed, its integrated twin-oval pipes a perfect match to the oval-infused LED lighting elements above. My tester’s 21-inch multi-spoke alloys are specific to the Speed too, and absolutely stunning.

If you’re reading this with an intention to purchase, the GTC Speed’s $340k base price won’t be an issue. My tester was optioned out further with a heatable steering wheel, ventilated and massaging front seats, a neckwarmer integrated within the seatback, contrast stitching, Wi-Fi, and more for a total that passed right on by $350k. Compare it to other exotics and the GTC Speed actually represents very good value, while the respect it earns borders on reverence.

Beautiful, distinctive, rare and unbelievably capable, the Continental GT Convertible Speed combines the best of luxury grand tourers with near supercar levels of performance for an experience unlike anything else available.
©(Copyright Canadian Auto Press)
Car Shopping Tools