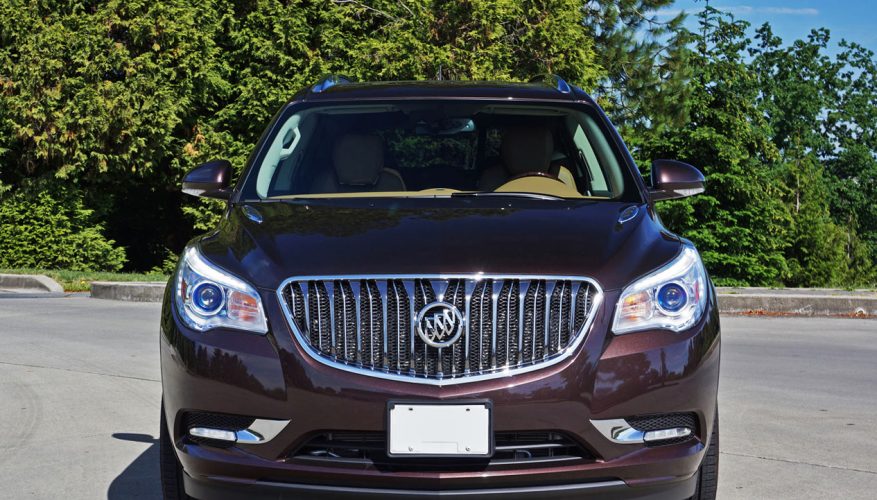 By: Trevor Hofmann
General Motors does giant business with the Enclave in the U.S., having sold 62,081 last year and a near identical 62,300 the year before, this placing it in third in overall luxury SUV sales and first as far as seven-passenger utes go, but here in Canada it’s an entirely different story. When calendar year 2015 came to an end the Enclave had only found 3,361 Canadian buyers, which is slightly more than half of its U.S. sales per capita, making it seventh most popular in the same category and fourth amongst three-row crossovers, beaten by the BMW X5, Acura MDX, and Infiniti QX60. Why such a big discrepancy between markets?

One reason is pricing. You can buy a base Enclave for under $40k south of the 49th, which is a slightly decontented version (no leather) of the same SUV that costs close to $50k here. The latter number means it’s the lowest priced seven-passenger luxury branded mid-size crossover utility in the U.S., and not quite as competitive here in Canada.

GM Canada’s 2016 Enclave in base Leather FWD trim hits the road at $48,935 before freight and dealer fees (and GM’s often sizable discounts), which incidentally is an $875 increase over last year’s starting price (not bad considering our plunging dollar). Add AWD, which is how most Canadians buy it, and the price grows to $51,935, which means that it’s $4,235 pricier than the aforementioned Infiniti that comes standard with AWD.

The BMW is, well, a BMW, plus a superb vehicle so therefore premium buyers are willing to pay tens of thousands more for the privilege to drive one, not to mention the prestige allotted by its tier one luxury status.

This brings up another challenge: Buick’s premium brand credentials are only slightly more alluring than mainstream volume makers like Toyota, Honda, Nissan, Hyundai and Kia, and yes I suppose Chevy and GMC too, not even measuring up to most peoples’ perceptions of Lincoln. In fact, in a recent Automotive News’ story about the challenges tier-two luxury brands have competing against the three German tier-one brands and Lexus, Buick isn’t even mentioned in the discussion, although to its credit a lot of brand fans voiced their opinions that it should’ve been there right beside Cadillac.

Let’s use this last point to segue the most important reality. Buick fans consider it a premium brand and the Enclave a worthy challenger that warrants its relatively high price tag. Let’s not forget, 3,361 Enclave customers thought it was the best choice in the segment, and to Buick’s credit it’s already sent 2,116 down Canadian roads over the first six months of 2016, which puts it ahead of the QX60’s 2,035 sales during the same period (albeit still fourth because 2,321 were wooed by Audi’s’ new Q7). Why did they buy it?

I can point to a number of key attributes that work for me, starting with styling that looks rich and upmarket in a traditionally luxurious way. Buick’s elegant waterfall grille immediately grabs attention, as does the strip of LED accents across the top of each HID headlamp, the LED fogs and chrome adornment below, additional chrome overtop by way of hood-mounted “VentiPorts” and standard bright roof rails, down each side on the window surrounds, door handles and mouldings, at the back around the taillights, bumper moulding and exhaust pipes, and of course Buick’s tri-shield insignia. Few attempt to argue against a design that’s been mostly praised, the only negatives to naysayers being its conservatism and duration.

The Enclave has been with us since 2007, and other than a mild albeit nice evolutionary mid-cycle refresh for the 2013 model year it’s been steady as she goes at Buick. Surprisingly it will continue unchanged for yet another model year making the first generation a decade old before it retires. The SUV continues to do well because the original Lambda platform architecture was very well designed and extremely large, the Enclave’s overall footprint greater than most of its mid-size crossover class members. Only Mercedes’ GLS has a longer wheelbase, more width and greater height, the new Volvo XC90 also wider, with no others taller, and the Enclave longest overall. This gives it superb interior roominess in all three rows, with cargo capacity galore.

First off, where its competitors only offer seating for seven you can opt for an eight-seat Enclave if requirements demand, and the rear seats can even fit my five-foot-eight frame and larger while they’re extremely easy to access thanks to impressively contorting second row buckets. The cargo compartment, which isn’t finished as richly as its premium peers due to a lack of sidewall carpeting and few shiny metal bits, measures 682 litres (24.1 cubic feet) behind its 60/40-split third row, 1,985 litres (70.1 cubic feet) aft of the two second-row buckets, which conveniently provide a large opening down the middle for stowing longer items like skis, and finally 3,286 litres (116.1 cubic feet) when both rear rows are flattened. There’s also a decent sized storage compartment below the load floor, ideal for hiding valuables.

The Enclave is a DIY seating system without power-folding seatbacks or even cargo wall-mounted handles like many of its rivals, the rear seats hardly an issue but the second row requiring a walk around to the side doors in order to lay flat. Lowering the seat automatically drops the headrests down, which tuck neatly behind the front seats.

The driver’s seat is large, spacious, fairly adjustable and therefore quite comfortable, but there’s almost no lateral support so, with one hand firmly gripping whatever it can in order to keep body in place, its performance capabilities are limited despite a reasonably agile suspension. Of course the Enclave is more about comfort than speed, its ride sublime even over rougher pavement, its cabin incredibly quiet, and therefore its highway cruising competence hard to beat. On that note it loves to stretch its legs, so to speak, effortlessly taking to high-speed straights and nice long curves. This is an ideal conveyance for the yearly summer road trip or weekend jaunts to the ski hill in winter, its fuel economy even pretty good at a claimed 14.2 L/100km city, 9.9 highway and 12.3 combined with FWD or 14.6 city, 10.2 highway and 12.6 combined with AWD, plus it only requires cheaper regular fuel.

The standard 3.6-litre V6 makes wonderful noises at full throttle and is adequately energetic with 288 horsepower and 270 lb-ft of torque, although the smooth shifting six-speed automatic it’s mated up to is two gears below average and also missing auto start/stop, regenerative braking, plus other efficiency technologies that are now commonplace in the luxury sector.

Speaking of missing features that are common in the luxury sector, on top of the items mentioned earlier the Enclave only has auto up/down powered windows for the driver and auto down for the front passenger with no auto capability anywhere else, so if you’re moving up from any run of the mill VW you’ll feel a bit vexed, plus the plastic trim around the second-row child seat anchor kept falling off no matter how many times I tried to reapply it.

On the positive a beautiful big rear glass sunroof duplicated the light emitting efforts of the one up front, a good thing as the Enclave’s interior is a true delight from a visual perspective. I suppose you’ll need to be a lover of traditional American luxury, as there’s plenty of nice dark chrome trim and what looks like an entire rainforest leveled to fit out its decorative inlays, but not to worry as it’s easily recognizable faux wood trim everywhere but the steering wheel. It’s an attractive but old school look that won’t be to everyone’s liking, nor will its dated dash digitals, especially the trip computer amid the otherwise attractive primary gauge package, but the infotainment system on the centre stack should meet most buyers’ expectations.

It’s a bit small at 6.5 inches yet the resolution is very clear, colours rich and graphics good. I found the touchscreen’s various digital buttons tiny even for my smallish hands, but everything worked well including my phone that connected quickly and stayed connected all week, which is not always the case, and the Bose audio system delivered superb sound. Additionally, the Enclave now includes OnStar 4G LTE, turning the big SUV into a Wi-Fi hotspot.

I really liked my tester’s leather-like stitched dash top, which is better executed than some others in the segment, and the soft-touch door uppers are nice albeit expected in the class, but Buick needs to do a much better job finishing the rest of its interior plastics that don’t even come close to measuring up. Really, the design team of the next generation should look over to top-line versions of the Chevy Silverado to see how to finish the lower dash and glove box lid in nice, rich pliable synthetic. At least six of the Enclave’s eight roof pillars are fabric wrapped, the same high-grade roofliner material also surrounding the sunvisors that are particularly well finished. What’s more, along with the HVAC interface mentioned a moment ago the majority of cabin switchgear is made from good quality materials, tightly fitted and nicely damped, but just when I’m beginning to feel comfortably settled in I once again notice the cheap roll-top centre bin cover, even constructed of poorer quality plastic inside, or even worse, I see the industry’s cheapest key fob dangling from an even cheaper five-and-dime key that’ll make a Chevy Spark or Sonic owner feel like he’s living large. Where’s the pushbutton ignition system Buick? Or proximity entry, adaptive cruise control, active safety features, rear seat heaters? Don’t get me started.

My Premium tester added standard AWD plus adaptive cornering headlights, power-folding side mirrors with driver-side auto-dimming and auto reverse tilt-down for both sides (what happened to auto-dimming for the passenger’s side?), memory settings for those side mirrors, the driver’s seat and the upgraded power tilt and telescopic steering column, cooled front seats, 10-speaker Bose audio, rear seat audio controls and earphone jacks, forward collision alert, lane departure warning, etcetera. A towing package that increases the Enclave’s base 907-kilo (2,000-lb) rating to 2,041 kilograms (4,500 lbs) was also included on my tester.

At a starting price of $56,435 plus freight and fees my Premium tester still needed an optional cargo cover and cargo net at $150, while other packages and standalone options including the dual-pane sunroof, navigation system with NavTraffic, all-weather floor mats, and let’s not forget pricier metallic paint, all pushing my tester into Q7 and X5 territory with a final tally of $63,715. It could have still included more, a fully equipped model with 20-inch alloys, rear seat entertainment and more passing $66k, which makes it pricier than a loaded QX60 or MDX Elite, both much better equipped and arguably delivering a more premium experience both in daily use and at the dealership level.

Then again your local GM dealer might offer a bigger discount, while even more critical Buick has an excellent reliability record with a fifth-place ranking amongst premium brands in Consumer Reports’ 2016 report card on reliability and third in J.D. Power’s 2016 Initial Quality Study as well as its 2016 Vehicle Dependability Study, the latter being third overall. I suppose there’s a price to pay for getting where you want to go without problem, and the Enclave will certainly keep you comfortable along the way. It’s very far from perfect, but the big SUV does some things very well and for that it deserves its reasonable Canadian success, but in order to continue growing its market share it’ll need to step up with something new very soon.
©(Copyright Canadian Auto Press)
Car Shopping Tools