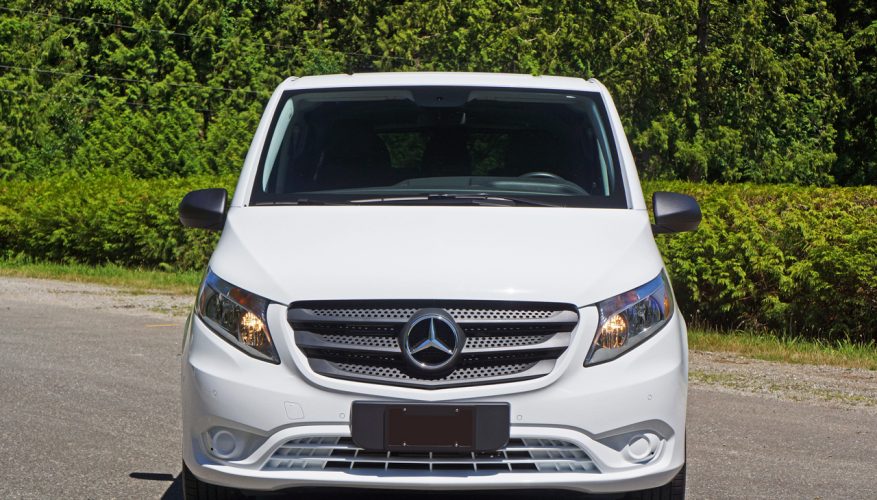 By: Trevor Hofmann
The Metris is a commercial van, so someone please tell me where I can get a job driving one every day. I think my back felt better after getting out than it did going in.

I suppose Mercedes wouldn’t turn you away if you wanted to buy one for shuttling around your large family, and I must say it would be a good choice, but I’m going to guess 630 out of the 635 sold across Canada over the first six months of 2016 were to companies ferrying passengers from hotel to airport, cargo from warehouse to retail outlet, and so on.

On that note Mercedes sells passenger and cargo variants of this uniquely intermediate-sized van, the former my transport du jour, and while we were tempted my photographic partner and I stayed the urge to round up eight of our friends for a rowdy commute to an afternoon ballgame. We would’ve all been quite comfortable, its six rear seats almost as roomy and supportive as the two up front, although after time well spent behind the wheel I’ve decided the best seat in the house gets saved for the driver.

The seating position couldn’t be better, upright with a commanding view of the road ahead, ideal visibility out the side and rear too, all controls properly placed for easy reach, the gauges nicely legible, features more than expected in this class, everything exactly the way I’d want if facing 40 hours per week of (hu)man and machine against traffic.

The cabin is a wonderfully unorthodox mix of purposefully utilitarian plastics and seemingly misplaced luxury, Mercedes’ usual soft touch synthetic surfaces noticeably missing from a vehicle that wears a three-pointed star on the steering wheel hub, but then as if designed to be Tag Heuer’s bespoke delivery vehicle (a combination Carrera Calibre 5 and Carrera Monaco Grand Prix Limited Edition seems about right), what is easily the most attractive primary gauge cluster ever assembled for a commercial vehicle stares out from under the dash hood. Its two black-faced chronograph style dials are rimmed in thick satin silver, as are the two smaller gauges within, while between this duo a high-resolution colour multi-information display provides useful info via nicely organized, well made steering wheel switchgear, the latter also edged in satin silver. To be clear none of this is standard, but it’s available and very good.

The steering wheel stalks and paddle shifters are standard, mind you, and could be right out of an M-B road car, but then the wheel itself is simple polyurethane instead of Mercedes’ usual leather, albeit thick and meaty, ornately dimpled with grippy perforated indentations and sportily shaped with curving thumb spats as if it was destined for an AMG-tuned track star. In comparison the rotating headlight switch is downright rudimentary, but a quick glance over to either door panel shows beautifully detailed satin silver for the door handles, three-way seat heater controls, power window switches and surrounding trim.

Over on the centre stack the theme is more black than silver, but between two pads of buttons and a dial for audio, phone and navigation on the left, and a telephone keypad, back button and joystick style toggle to the right, is a decent sized colour infotainment display, while a simple two-knob HVAC interface just below gets a touch of metallic glitz to visually tie it together with the rest of the cabin, my upgraded Metris a brilliantly juxtaposed yin and yang experience all rolled up in a perfectly utile passenger van that will surely keep any professional driver happy, refreshed and alert all day long.

Upon startup I noticed two things. First, if you don’t fully close any one of its doors, which include the two up front, two side sliders and two rear barn doors, not to mention the hood, you’ll immediately get a pictograph warning on the multi-info display that actually pinpoints which door (or hood) was left open. What’s more, if you start driving without closing the door it’ll remind you with a subtle chime every time you pull away from a stop. Second, the squared off shape of the Metris might appear about the size of a classic domestic van, the kind I grew up with way back in the day, but the engine powering it was certainly no big six or V8.

It’s actually a small 2.0-litre four-cylinder pulled from Mercedes’ plentiful parts bin. The turbocharged and direct injected engine makes 208 horsepower and 258 lb-ft of torque, the latter from a mere 1,250 rpm, which when combined with its smooth shifting seven-speed automatic and steering wheel-mounted paddles results in surprising performance for a vehicle that weighs 2,200 kilos (4,850 lbs).

The Metris drives like a Mercedes-Benz, which might sound funny being that it is a Mercedes Benz, but it’s a commercial vehicle as well. It starts off with a traditional column stalk shifter, although it’s the new electronic type that gets pulled down for drive and up for reverse, plus a button on its end is pushed inward for park. The paddles work the usual way, and while some might want to use them to extract more get up and go I found myself short shifting to improve fuel economy more often than not, the Passenger Van rated at a superb 10.9 L/100km combined city/highway. The Panel Van does slightly better at 10.5, while an optional auto start/stop system helps to save even more in the city while doing its best to minimize smog.

Where the Metris mostly feels Mercedes-like is in the ride, which is downright sublime thanks in part to a fully independent suspension. Unlike the powertrain its chassis architecture is a completely unique design only recently developed, and starting from scratch has certainly paid off. It’s not only wonderfully comfortable over any type of road surface, the Metris proved solid and planted at higher speeds and even quite agile through quick corners. This will hardly be news to those who’ve driven the larger Sprinter, but believe me the Metris takes commercial van handling to new levels, which of course is more about accident avoidance than carving up a favourite canyon road.

That in mind the Metris comes standard with the usual assortment of active and passive safety features as well as hill-start assist, tire pressure monitoring, and Crosswind Assist, that latter helping to maintain a straight and steady course amid heavy sidelong gusts of wind, while active parking assist, forward collision warning, lane-keeping assist, and blind spot monitoring are optional.

I mentioned its intermediate size at the beginning of this review, but maybe the term mid-size will help categorize it in your mind’s eye. In the commercial market the Metris fits neatly between compact vans such as the Ford Transit Connect, Ram ProMaster City, plus the Nissan NV200 (a.k.a. Chevy City Express), and full-size vans like Chevy’s Express, Ford’s Transit, Ram’s ProMaster, Nissan’s NV, plus Mercedes’ own Sprinter, giving it a unique niche.

Mid-size in mind its one-size-fits-all dimensions (there are no long-wheelbase or extended roof variants) are more similar to a modern-day minivan like the Dodge Grand Caravan, Honda Odyssey or Toyota Sienna, although at 1,928 mm (75.9 inches) wide it’s somewhat narrower and its 1,910-mm (75.2-inch) height is about 180 mm (7.0 inches) taller than the more car-like family van average, but it can still sneak under most garage doors. Measurements closer to the minivans include the Metris’ 5,141-mm (202.4-inch) length and 3,200-mm (126.0-inch) wheelbase, although its rear-wheel drive layout makes the Mercedes a great deal more maneuverable in tight spaces, its turning radius a short 11.8 metres (38.7 feet).

Those rear barn doors mentioned earlier first open to 270 degrees and can be pushed farther to 180 if pulling up to a loading bay, or alternatively you can opt for a minivan-style liftgate that’ll keep passengers and cargo dry if accessing luggage in the rain, while the cargo area behind the third row is sizable at 1,060 litres (38.0 cubic feet). If you were to remove all the seats you could technically accommodate up to 5,270 litres (186.0 cubic feet), which is the maximum load space in the Cargo Van. Keep in mind you can load up to 850 kilos (1,874 lbs) of payload into the Passenger Van, the Cargo Van good for 1,135 kg (2,502 lbs), while both can tow a maximum trailer weight of 2,250 kg (1,960 lbs).

My tester allowed up to eight occupants including the driver, although an alternative layout reduces that total count to seven. Access to the middle row is as easy as opening one of the side sliders and taking a seat, the tall roof mentioned earlier allowing much easier movement when inside than any minivan. Getting to the rearmost row requires access through the passenger’s side after tilting the outboard seat up and sliding it forward on its metal runners, a process that provides plenty of ingress and egress room. The side doors can be powered like a minivan’s, incidentally, allowing your driver to stay seated while picking up or dropping off passengers, increasing efficiency and safety if loading curbside. Once seated there’s a lot more space from front to back than a traditional minivan and the backrests are very comfortable, although the third-row armrests are hard plastic, not padded. Close those sliding doors or any of the others and they thunk shut with Mercedes’ usual solidity, however, the Metris built to a very high standard.

Believe it or not Mercedes could have gone further to enhance my Metris loaner’s luxury appeal by added the Driving Assistance package that includes heated power adjustable side mirrors, rain-sensing wipers, a leather-wrapped steering wheel, and the aforementioned active safety features, while a Comfort Seat package adds upgraded front seats with lumbar support and seatback storage nets.

You might not realize it by looking at some of Mercedes’ competitors, but styling matters in the commercial vehicle sector. After all, your vehicle represents your company’s image, which can be a big mobile billboard in the case of a panel van. To that end the Metris is one of the more attractive in its class with clean, elegant frontal styling, a long, lean profile, and neatly squared-off edges that present a modern sense of style, while who wouldn’t rather be picked up in a Mercedes-Benz than some volume-branded product, an especially important consideration for those in the hotel business or any other venture that deals in luxury.

As you can probably tell I’m impressed with Mercedes’ new Metris Passenger Van, my only complaint being a hood prop that doesn’t include a rubberized or plastic grip and therefore burned my fingers when lifting it into place as part of our photo shoot. If it were mine I’d wrap it in electrician’s tape and be done with it, a minor annoyance that’s hardly worth griping about. The rest of the van is simply too good to find fault with, from its overall design, attractive interior, efficient powertrain, fabulous ride, overall roominess, parking friendly dimensions, and the list goes on. This should be a very good year for Mercedes’ commercial division.
©(Copyright Canadian Auto Press)
Car Shopping Tools