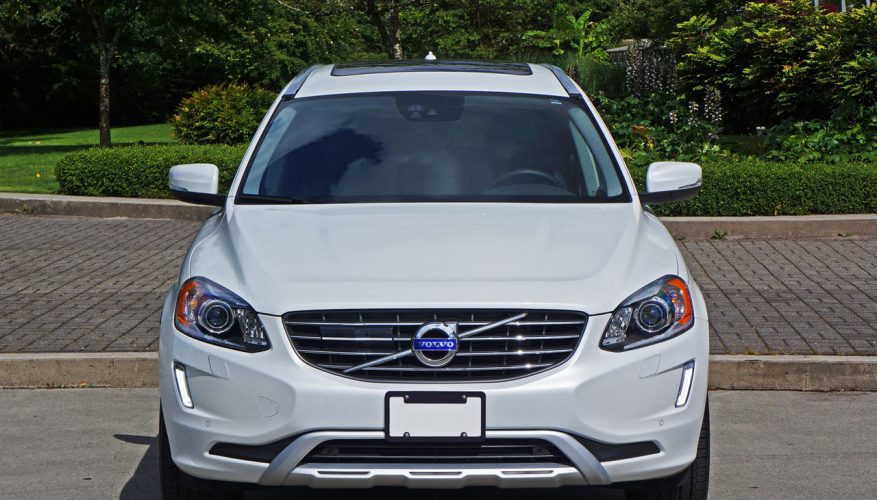 By: Trevor Hofmann
Only a year after the XC60 was introduced in 2009 it replaced the XC90 as Volvo Canada’s bestselling model, and while this will change for 2016 thanks to the brilliant new XC90, the smaller compact utility remains a strong seller for the Swedish luxury brand.

Having been editor more often than writer when Volvo introduced the XC60 I had the pleasure of proofreading five XC60 reviews before getting my first weeklong tester, a pre-facelift 2012 T6 AWD R-Design, which after a couple of additional edits was followed up by a refreshed 2015 T6 AWD, both of which I heaped praises upon, so time recently spent with a 2016 T5 AWD in SE Premier trim was like being reacquainted with a favourite traveling companion.

A quick glance showed it was still stylish, although next to its totally redesigned bigger brother the XC60’s gracefully sporty lines certainly look a generation behind. Granted my loaner was at the lower end of the “Editions” quad, the other three being the R-Design, Ocean Race and Inscription, but value represents its own kind of beauty and the XC60 has plenty of that in both form and function.

First off you can get into an XC60 for only $42,000 plus freight and dealer fees, and it’s just as well built and refined as the Special Edition I just drove. Highlights shared with the two trims and every other XC60 include a completely soft-touch synthetic dash top that wraps all the way down the instrument panel, the same pliable material used for the door uppers, which actually flow all the way around into the lower portion of the doors as well, covering everything but the map pocket insert, while stitched padded leather fills the door inserts before melding into each armrest. Elegant satin silver trim circles around the switchgear to arrive at the door handles, while that same metal trim highlights the steering wheel, gauge surround, side vents, floating centre stack surround, CD changer slot and various switchgear, plus the otherwise leather-clad gearshift knob, while all the roof pillars are finished in fabric. It’s a rich looking cabin that exudes quality, and yes this should be expected in the premium sector, but the XC60’s interior is another notch above many in this class.

On top of all this is a long list of standard safety gear including the usual four-wheel discs with ABS, electronic brake-force distribution, and brake assist, plus Optimized Hydraulic Brakes, Ready Alert Brakes, Fading Brake Support, City Safety autonomous emergency braking, stability control with a sport mode and torque vectoring corner traction control, roll stability control, active front headrests, safe approach and home safe lighting, a security system and immobilizer, plus the usual count of airbags, all of which combine to earn the highest possible IIHS Top Safety Pick Plus rating and five stars from the NHTSA for every XC60 trim.

As far as upgrades go they’re wide and varied with five available engines, two transmissions, front or all-wheel drive, numerous trims, plus options aplenty, the $56,450 T5 AWD SE Premier just one nicely packaged example of many possibilities. As you might expect it receives a lot for the $14,450 price increase, the most noticeable change being its direct-injected and turbocharged 2.5-litre inline five-cylinder engine that adds 10 horsepower and 8 lb-ft of torque over the base 2.0-litre Drive-E powerplant for a total of 250 horsepower and 266 lb-ft of torque, but the big difference is the way the engine performs. It provides a more substantive feel, closer to a six, while power delivery is particularly smooth and linear, a nice match for Volvo’s six-speed Geartronic automatic with truly Advanced Quick Shift manual mode and upgraded all-wheel drivetrain, not to mention a good choice to take advantage of the XC60’s impressively deft handling and particularly compliant ride. The only negative is a hit on fuel economy with the T5 AWD getting a 12.6 L/100km city, 9.1 highway and 11.0 combined rating compared to 9.8 city, 7.6 and 8.8 combined for the T5 Drive-E FWD.

The stylish configurable TFT gauges just noted incorporate a main dial at centre filled with a speedometer spinning around the perimeter and a small albeit crystal clear, highly graphical colour multi-information system in the middle, flanked by two vertically curved ancillary gauges, the left for temperature and the right for the tachometer and other functions. The MID provides most everything expected within including navigation details, although pulling up guidance prompts was a slow process.

I have long been a big fan of Volvo’s floating centre stack and TV remote style control interface, the latter made up of numerous quick access buttons for modulating anything and everything you could want, ringing around a telephone keypad up top and Volvo’s intuitive human body-shaped HVAC fan direction controller below, all of which is surrounded by metallic surfacing and four beautifully finished metal trimmed knobs at each corner featuring buttons for audio, infotainment, and the HVAC system on top. It’s an eye-catching design that initially might seem intimidating to minimalists, but is easy to figure out and works flawlessly, especially the audio system that provided wonderfully rich, deep bass tones that were ideal for enjoying Macklemore’s One Love and Fifth Harmony’s (with Ty Dolla $ign) Work From Home.

The front seating area is very roomy for a compact, the XC60 quite wide for its class, allowing excellent shoulder and hip space and about four inches above my head, and that’s despite the lower roofline due to the aforementioned panoramic sunroof. Of course I’m not a large person, measuring five-foot-eight, but taller folk should still fit in with ease. When the driver’s seat was positioned for my size I also had about six inches ahead of my knees and plenty of room for my feet when in back, plus another five or so inches over my head. The second row seats are superbly comfortable too, with excellent lower back support, while a wide leather armrest folds down from centre, complete with flip-out dual cupholders and a shallow lidded tray. As noted, Volvo provides excellent rear air circulation via B-pillar mounted vents that include their own flow modulator, while the seat heaters feature three temperature settings with the highest quite toasty.

Power up the liftgate and a nicely finished cargo area glitters with metal tie-down hooks and the metal threshold plate mentioned earlier, while both sidewalls and the seatbacks are carpeted. Volvo even includes a nicely finished compartment under the cargo floor, plus a pop-up cargo divider. Overtop everything is a cargo cover that retracts into a strong steel crossbar, which is easily removable when loading in larger items via the folded seatbacks, and as noted the rear seats’ 40/20/40 configuration really makes the most of the maximum 1,907 litres (67.3 cubic feet) available (there’s 873 litres or 30.8 cubic feet when all seats are in use), plus both rear passengers will be happy on their way back from the ski hill thanks to gear down the middle and outboard cushions ablaze.

We all know a new XC60 will arrive within a year or so, and no doubt it’ll be just as sharp looking as the current XC90 that’s winning awards and gobbling up sales, but until then Volvo’s compact SUV remains a very competitive choice with a better than average interior and untouchable safety that can be had for an extremely good price.
©(Copyright Canadian Auto Press)
Car Shopping Tools