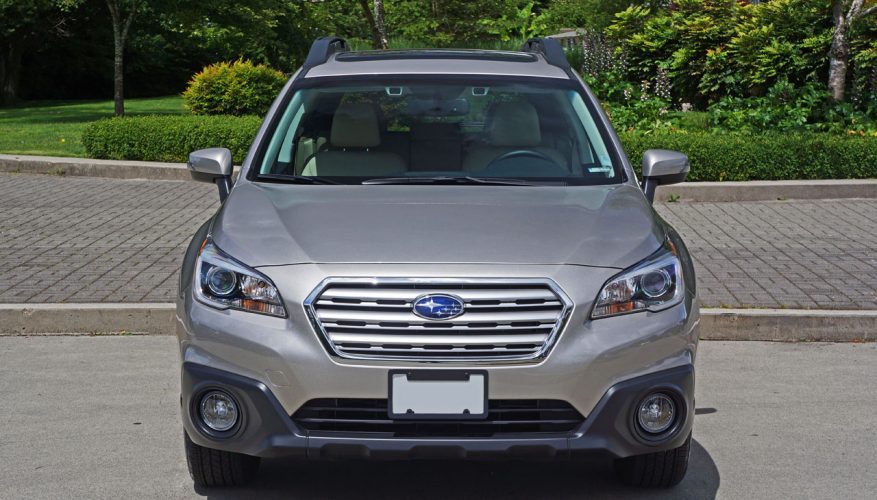 By: Trevor Hofmann
The Outback remains an anomaly, and that’s probably just the way Subaru and its owners like it. It’s the Seiko 5 of crossover SUVs. An honest car-based utility that’s considerably more competent than its obviously wagon-derived outward appearances let on. It was initially created long before the term CUV (Crossover Utility Vehicle) was even coined, provides all the capability of most modern-day SUVs yet isn’t trying to visually emulate a truck-based sport ute in the slightest, while it generally keeps on ticking accurately well past its prime.

I see older Outbacks everywhere. A gold first-generation drove past on the highway yesterday afternoon and I parked in front of a two-tone green third-gen example at the dollar store on the way back home that night (yes, Subaru owners are practical). The Outback has been with us since 1994, the first model described having made way for the second generation in 1998, so you can appreciate they have a habit of lasting for decades, like that Seiko wristwatch just noted.

This said the latest 2016 Outback Limited with its as-tested Technology Package is more like a Grand Seiko, which is probably today’s best value in high-quality luxury timepieces with prices ranging from $2,000 to more than $20,000. You’ll need to come up with at least $27,995 plus freight and dealer fees to get into the least expensive Outback, mind you, while my aforementioned tester was priced at $37,195 and could still be optioned out with Subaru’s wonderfully smooth and powerful 3.6-litre H-6, but at the end of the day you’ll own an extremely useful five-passenger go-nearly-anywhere transporter to help take care of life’s errands and jet your family away on weekend road trips, not merely (with all due respect to Seiko) something fashionable to wear on your wrist; end of analogy.

The rest of the car is mostly carryover, which will be just fine for its legions of fans that have become so faithful they wouldn’t be seen driving anything else. Call it mutual respect or a standalone subculture, but there’s a unique fraternity of Outback drivers that nod to one another when passing by, as if they’re all in on some grand illuminati scheme that’s secretly preparing for an SUV-triggered global catastrophe yet still need to be prepared to escape a collapsing society when roads become impassable. OK, I read too many sci-fi books and have watched Battlestar Galactica too many times, or maybe I’m just describing the proposed effects of rising waters in warmer future years, but I’m not making up the part about mutual respect. It’s not quite to the level of EV owners coalescing at charging stations, gods forbid if Subaru makes a plug-in Outback, but that knowing nod is real.

What they know that you don’t (unless you’re already in the Outback clique) is just how good this beefed up wagon is. First of all they’re fully aware that you don’t need to pay silly money for a premium brand to get the latest luxury, convenience, emissions and safety features, nor top-tier quality, while unlike many of those supposed luxury brands that merely dress up variants of mainstream volume models with top-tier equipment the Outback includes an entirely original, wholly capable and highly reliable engine and drivetrain combination (nod to Seiko’s superb in-house movements here).

As you may already be aware, Subaru marches to the offbeat rim shot of a very different albeit perfectly syncopated drummer when it comes to powertrains, both its four- and six-cylinder engines being horizontally opposed rather than the usual inline-four and V6 configurations. Few manufacturers have dabbled with “boxers”, but the names of those that have are revered to say the least. Subaru joins the highest priced Porsches as well as some of Ferrari’s most coveted models, and even the absurdly priced and ridiculously fast W Motors’ Lykan HyperSport (albeit that last model is powered by a super-tuned Porsche H-6). The flat “contra engine” was first conceptualized by Karl Benz of Mercedes fame way back in 1896, so to say it has a rich history is an understatement. One of its merits includes a shorter than average height and therefore the ability to be laid lower in a car’s chassis, resulting in a reduced centre of gravity and better handling.

I don’t know if the 2.5i four-cylinder’s compact dimensions help the Outback iron out corners as much as it enhances the BRZ sports car’s capabilities, but this largish mid-size CUV sure feels confidence inspiring through sharp, quick curves. While taller than the average car and therefore delivering great visibility all-round, the Outback is one of those rare vehicles that feels smaller and lighter than it actually is, an attribute that helps out on the open road as much as amid inner-city congestion or when negotiating confined alleyways (that are oftentimes as treacherous to deal with as less traveled wilderness trails).

Along with its agility comes a level of comfort that’s hard to beat, the car’s fully independent MacPherson strut front, double wishbone rear suspension and multi-adjustable seats combining for an overall relaxing experience, although don’t mistake relaxed for slow, the 2.5i tested providing 175 horsepower and 174 lb-ft of torque which is more than enough for quick takeoff and brisk highway passing performance, but it’s probably best described as smooth and linear rather than outright fast. If you require or want more the 3.6-litre H-6 mentioned earlier produces a formidable 256 horsepower and 247 lb-ft of torque.

Mated to the powertrain is a six-speed manual gearbox in base trim or optional CVT with sequential manual mode and paddle shifters for a very normal feel and extremely efficient operation, the model tested being five-cycle EnerGuide rated at 9.3 L/100km city and 7.1 highway while the manual is good for 11.0 and 8.2 respectively; the H-6 achieves a comparably thrifty 12.0 city and 8.6 highway, plus the Outback is Partial Zero Emission Vehicle (PZEV) rated.

All Outbacks come standard with Subaru’s acclaimed symmetrical full-time AWD as well as an X-Mode setting that lowers the gear ratios, deactivates the transmission’s lock-up clutch, speeds up the traction control system’s response time and engages hill decent control, all in the name of providing increased surefootedness on steep, slippery terrain, features that when combined with the model’s 220-mm (8.6-inch) ground clearance result in better off-road capability than most of its more SUV-looking competitors, the Outback’s off-road prowess also enhanced by standard traction control, stability control, and active torque vectoring, while braking comes via strong four-wheel discs backed up by ABS, electronic brake-force distribution and brake assist.

Of course all of these active safety technologies make for better on-road stability too, my Limited model’s machine-finished 18-inch alloys with black painted pockets on 225/60R18 all-seasons doing likewise while improving on the standard 225/65R17s, whereas its towing capability is a bit better than average at 1,224 kg (2,698 lbs).

It all comes inside a cabin that leaves little to separate itself from a premium-branded crossover, with the Outback Limited including fabric wrapped A-pillars, an upscale soft touch synthetic dash top that wraps right down to the lower part of the instrument panel, around the centre stack, and even to the left side of the primary gauges. Subaru also covers the door uppers in the same high-quality pliable material, both above and below the woodgrain inlays, while that wood is especially authentic-looking with a nice matte finish, trimmed just below with a metallic appliqué. The door inserts are padded and covered in a perforated leatherette, while the armrests just below are even more plush and covered with a solid leatherette that’s also French-stitched, this continuing over to the centre armrest as well. The seats are the real leather deal, with perforated inserts and excellent support, especially in the lower back where power lumbar adjustment enhances their already inherently good design.

Other niceties include analog gauges with cool purple blue glowing around their edges, plus a large multi-infotainment display at centre. The steering wheel is leather-wrapped, its spokes filled with high quality switchgear for the audio system, scrolling through infotainment system on the centre stack, answering the phone, and setting the adaptive cruise control, while just below and behind the left side spoke is a set of three pull buttons for accessing the multi-information display.

The infotainment system is a real thing of beauty, completely integrated into the centre stack with a glossy black panel boasting touch-sensitive buttons to each side and a fully-featured Starlink interface within that incorporates navigation and mapping, audio, media, phone controls, apps, an info section with sports, weather, stocks, a vehicle monitor, Eco monitor, maintenance, and another one displaying your own music.

There’s ample room for large bodies up front and the rear seating area might even be more accommodating. I had about eight inches ahead of my knees when the front seat was positioned for my five-foot-eight medium build frame, plus plenty of room for hips and shoulders and another four to five inches above my head. A flip-down armrest provides a comfortable place for both rear passengers’ arms, plus two cupholders, while outboard passengers also get the benefit of two-way seat heaters. The rear seatbacks are split 60/40, so you won’t be able to have both outboard passengers enjoying those heaters with skis down the middle after a day on the slopes, which could cause some arguments as to which unfortunate soul gets the centre position, but on the positive the one-touch flat-folding functionality mentioned earlier speaks of inner door handle style releases to each side of the cargo wall that lower the 60/40-split rear seatbacks without having to walk around to the side doors, expanding its already commodious 1,005-litre (35.5 cubic-foot) cargo capacity to a sizeable 2,075 litres (73.3 cubic feet). My tester was fitted with an accessory cargo mat and even rubberized plastic backings to protect the seatbacks. Gaining access comes by a powered rear liftgate, while extra gear can be stowed atop two of the most over-engineered ultra-robust roof rack side rails in the industry when equipped with available cross members, all good reasons why Outback buyers continue to be so incredibly loyal.

Of course it doesn’t hurt that the car delivers legendary dependability, Subaru placing second overall and first amongst mainstream volume brands in Consumer Reports’ highly regarded 2016 report card on reliability, while that IIHS rating mentioned earlier gets joined by a five-star NHTSA crash test rating for all Outback trims.

The way I described Outback ownership earlier might make you think it’s a small, niche group, but in reality it does quite well in its mid-size crossover SUV class, coming close to matching Canadian sales of all three mid-size General Motors SUVs combined as well as the Toyota Highlander and Nissan Murano in calendar year 2015, while outselling the Nissan Pathfinder, Honda Pilot (and few remaining Crosstours), Toyota Venza and 4Runner, Dodge Durango, Ford Flex, and Mazda CX-9. In the U.S. it did even better last year, placing fourth out of 19 competitors, which means it singlehandedly beat all Honda and Nissan branded models as well as the Ford Edge and Flex, Chevrolet Traverse, Hyundai Santa Fe, Kia Sorento, Dodge Journey, and GMC Acadia, as well as the 4Runner, Durango, Venza and CX-9. It appears the smart choice is also a very popular choice.

I certainly can understand why. It’s not only a legend in its own time, but a totally useful, wonderfully comfortable, absolutely efficient, enjoyable to drive, electronically proficient, luxuriously equipped, impressively reliable and enviably safe crossover utility that looks pretty cool to boot. The only thing that could make it better would be affixing a Seiko Sportura Kinetic GMT to the centre stack, or better yet, fitting a classic Nooka to the same spot. Any takers?
©(Copyright Canadian Auto Press)
Car Shopping Tools