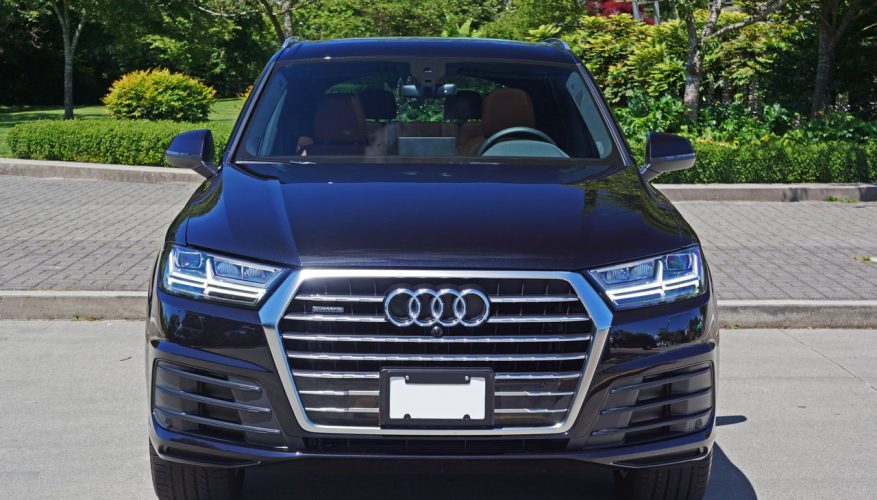 By: Trevor Hofmann
With almost every mid-size SUV from volume makers offering luxuries such as fabric-wrapped pillars, multiple soft touch points, genuine woods and metals, state-of-the-art electronics and the list goes on, some even sporting driving dynamics that rival premium brands, accepted luxury marques have been forced to up their game. Some have been left behind to fight head-on with near-premium competitors while others have answered the call and delivered an entirely new level of luxury never before seen in the price class. With the advent of the 2017 Q7, Audi is now at the top of the latter list.

It was hard to improve on the Q7’s styling, the new model adding more drama to the frontal design with a bigger, broader version of Audi’s singleframe horseshoe grille, expected revisions to its LED lighting elements front and rear, and sharper creases to all body panels, but the outgoing model’s interior mixed some extremely well made components with others that were substandard, most noticeably hard plastics across the lower dash and glove box lid, less than ideal electronic interfaces and some hollow feeling switchgear that suffered further from poorly damped, wiggly action, all of which will be immediately forgotten when slipping inside the latest Q7.

Where the old model caused me to question its worthiness against a number of better equipped albeit much lower priced volume-branded “competitors”, the new 2017 version, with pricing starting at $65,200 plus freight and dealer fees, has raised the bar within the entire luxury SUV sector. I doubt Range Rover will feel any pressure to improve its largest offering and BMW’s X5 has long been up to snuff, but the recently tested top-line $73,500 Q7 3.0 TFSI Quattro Technik was one of the most impressive crossover SUVs I’ve ever spent time in.

I won’t go into much detail about where Audi has applied high-grade soft touch synthetic materials because, beautifully finished leathers aside you’ll be sorely tested to find any hard plastic. What’s more, my tester even featured padded psuede for the door inserts, while genuine aluminum spanned the instrument panel, the lower console and each door panel, this only upstaged by absolutely gorgeous open pore hardwood laid alongside.

Then again you may be more stimulated by electronic interfaces, another area the Q7 improves on the old model and just about everything else in the industry. Ahead of the driver is a fully driver-configurable high-resolution colour 12.3-inch TFT display that immediately modernizes the look of the primary controls. The graphics are crisp, clear and colourful, while a steering wheel-mounted “VIEW” button decreases the diameter of both tachometer and speedometer while instantly enlarging the multi-information display at centre, the latter replete with useful features and functions. Elegantly thin steering wheel spokes are filled with all the necessary switchgear to scroll through the MID and access other features, much of which is duplicated in more detail on the power retractable tablet-style 8.3-inch infotainment display overtop the centre dash.

Audi incorporated its MultiMedia Interface (MMI) display within the Q7’s instrument panel previously, so separating the infotainment screen frees space for a cleaner design that’s now more horizontal than vertical, dispensing of the traditional “centre stack”, at least visually. Additionally, the MMI’s lower console-mounted rotating dial controller has switched places with its completely redesigned and much more advanced gear selector, the latter now acting like a palm rest for the former, a smart idea being that most manual shifting duties are taken care of via steering wheel paddles and the new layout is just better from an ergonomics standpoint. The rotating dial is now joined by a couple of touch-sensitive toggles for navigation, telephone, radio, and media, various quick access buttons that recognize hand movements before actually being pressed, and a large touchpad with pinch, swipe and finger gesture capability, Audi even including a handy row of eight programmable preset keys for personalized control. The MMI operating system speed is much improved and its processes easier to navigate through, while both Apple CarPlay and Android Auto are included, which means voice recognition works better and GPS navigation is more accurate.

The quad-zone auto climate control interface (there’s another dual-zone HVAC panel in back) is also mostly touch-sensitive and includes buttons for the three-way heated and cooled seats at both sides, while just above is a nicely organized row of buttons for Audi’s Drive Select, turning off the auto stop/start system, powering the MMI screen into the dash, etcetera.

As mentioned the features described to you in this review are for top-line Technik trim, with other items not yet noted including full LED headlights, proximity access with pushbutton ignition, an electromechanical parking brake, ambient interior lighting, a power tilt and telescopic steering column, auto-dimming rearview and side mirrors, perforated leather upholstery, 12-way powered front seats with four-way powered lumbar, HD and satellite radio, a powered tailgate, loads of active and passive safety features and much, much more. It also included an array of optional packages and standalone features.

The Drive Select settings noted a moment ago include Comfort, Dynamic, Individual and Off Road, and while I never tested the latter I spent plenty of time in sport mode, or rather Dynamic mode in Audi-speak. This heightens all of the vehicle’s senses to perform with more flair, the new Q7 already one of the best handling SUVs in its class. Its ride gets a bit firmer albeit never harsh, while responses to steering input, throttle actuation and paddle-prompted shifts were immediate and thoroughly satisfying. Somehow Audi has managed to make a very large seven-passenger sport ute feel like a compact, yet it still delivers that solid, planted, substantive feel premium buyers like, my tester’s 285/45R20 Goodyear Eagle Sport run-flat rubber no doubt helping in this respect. I became so utterly connected with this machine, the Q7 so completely fused to the road, it was downright Borg-like.

The combination of 333-horsepower supercharged direct-injected 3.0-litre TFSI V6 with 325 lb-ft of torque, eight-speed automatic and Quattro AWD is once again fully up to the task of pushing all of this Q7’s mass, zero to 100km/h achieved in just 5.7 seconds, but its 2,240 kilos (4,938 lbs) of unladen weight has been dramatically reduced by 115 kilograms (253 lbs) in its Canadian-spec redesign thanks to much more high-strength steel and other weight-saving components. To be clear, if you’ve previously read other accounts of its reported 320-kg (705-lb) weight reduction, our version gets more standard equipment than the lighter base Euro variant, such as three rows of seats, a panoramic sunroof and more, but like I intimated a moment ago it feels a lot lighter than even our fattened up version should, taking to corners with newfound agility yet always respectful of overly pampered behinds.

Comfort mode is best to enjoy all the refined smoothness Audi has built into the new Q7, plus it’s also where the brand’s eco features come into play more readily, including the auto on/off idle-stop system that shuts the engine down smoothly and brings it back to life with hardly any notice while aiding the big Audi in its impressive 12.6 L/100km city, 9.4 highway and 11.1 combined fuel economy rating. On that note the Q7 is ultimately quiet whether the engine is temporarily stifled or running, increased sound deadening materials and attention paid to isolation from outside influences producing incredible results.

As you might expect the front two rows are roomy and Audi’s seats wonderfully supportive front to back, plus I actually made the effort to crawl into the third row to experience it first hand. Granted my five-foot-eight frame is hardly gargantuan, but I fit in with room to spare so critics saying they’re only good for kids should remain silent. In order to fit medium-build adults into all three rows there’s a process to be followed, mind you, first requiring the front row to be pulled almost all the way forward and then the second row entirely forward, which incidentally left reasonable space ahead of my legs, and then after climbing in back via a centre row that easily flips out of the way, allowed for about two inches in front of my knees, three inches above my head, ample hip and shoulder room, and overall comfort from the two seats provided. I never felt claustrophobic either, much thanks to large rear quarter windows plus a massive panoramic sunroof that comes close to reaching the rearmost quarters, but I probably wouldn’t want to spend an entire day back here.

As for cargo, Audi provides about 420 litres (14.8 cubic feet) behind the rear seats according to the U.S. EPA, which makes it similarly sized to the A4’s ultra-large trunk, but of course you can lay the Q7’s two rear rows flat for 2,027 litres (71.6 cubic feet) of life-hauling space so the world’s your oyster, garage sale Sundays have met their match. Lowering the third row can be accomplished via power switches located on a panel just behind the second row seats or the cargo side walls, and if you slide the second row seats all the way back before manually laying them flat it all folds together like a perfectly symmetrical jigsaw puzzle (if there is such a thing) topped off by an ideally flat cargo floor. When added to the wide opening rear aperture and relatively square-shaped roofline it results in a very accommodating load area. It’s made even better by the flexibility of a second row that splits into thirds, the folded centre position providing lots of pass-through space for ski gear or anything else long, this allowing second-row passengers to enjoy the benefits of the outboard seats, which in my tester’s case included three-way seat heaters.

Along with the supportive rear seats, dual-zone rear rear climate controls and air vented through the backside of the front centre console as well as the B pillars, it would be difficult to get more comfortable in the second row of any SUV this side of a Bentley Bentayga, so I wouldn’t be calling shotgun too quickly if I were you.

The only attribute more important to seven-passenger SUV buyers than versatile comfort is safety, and in this respect all Q7 trims earn a best-possible Top Safety Pick Plus rating from the IIHS, while Audi also achieved first place in Consumer Reports latest Report Card on Reliability and scores above average in J.D. Power’s most recent Vehicle Dependability Study, so long-term durability shouldn’t be a problem.

Even considering how good the new Q7 is it still faces a tough battle in the mid-size luxury SUV segment, but I can’t see anyone being disappointed if they choose Audi’s flagship utility over one of its competitors. The new Q7 is stylish, beautifully made, brilliant to drive, filled with top-tier features, ultimately safe and expectedly dependable.
©(Copyright Canadian Auto Press)
Car Shopping Tools