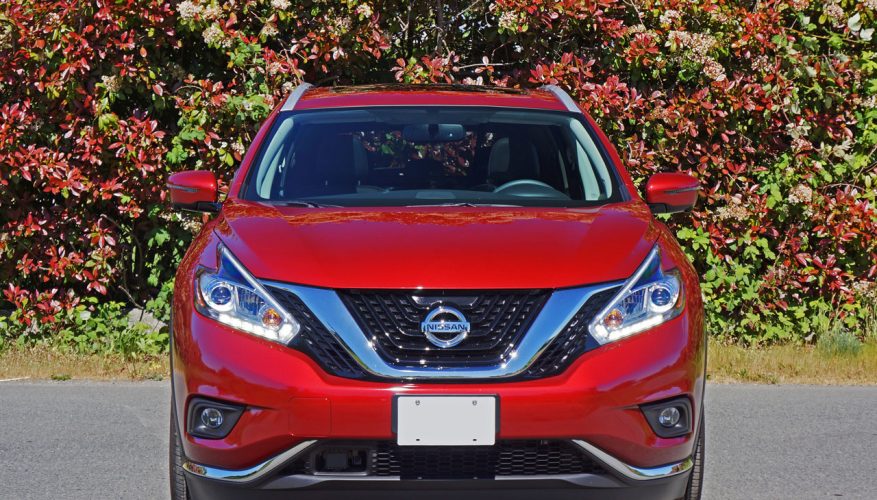 By: Trevor Hofmann
The Murano is mostly unchanged for 2016, having gone through a complete redesign last year. This is no bad thing, because it’s still one of the more exciting mid-size five-passenger SUVs on the market. It delivers a complexity of curves, angles, and an overall wow factor that none of its volume-branded crossover SUV rivals come close to offering, the Murano showing premium grade style and fortunately following that up with a premium level of substance.

This is most evident inside where it rivals luxury utes in design and execution. OK, it doesn’t offer as many soft touch surfaces as its competitors, leaving a premium dash top off its list of mollycoddling indulgences like its larger Pathfinder sibling, although it gets a contrast-stitched and padded leatherette hood overtop the primary gauge package while the instrument panel boasts a supple synthetic treatment all the way down to where it disappears below the knees, as do the front and rear door uppers, the door panels also benefiting from padded leatherette inserts and armrests with yet more light grey stitching, this theme repeated atop the centre console as well, whereas most other surfaces are finished in a nice quality matte finish harder grained plastic that looks as if it will wear well over time.

My Platinum trimmed tester received a silver-tone mother of pearl style inlay across the instrument panel, the doors, the lower console, between the driver and passenger armrests on the console bin lid, and the shifter knob, the upscale design detail only marred by gaping gaps where the dash meets each door panel, although nice satin silver trim does its best to draw more attention to the dash vents, centre stack, and shifter surround while de rigueur piano black lacquered plastic surrounds all of the centre stack controls. It’s a rich looking interior that’s even topped off with padded fabric-wrapped A-pillars, unusual but welcome for the class, mine infused with a set of Bose tweeters for the upgraded audio system.

Ahead of the driver is an attractively organized primary gauge cluster incorporating analog tachometer and speedometer dials left and right and conventional temperature and fuel meters integrated within each respectively, while a very large 7.0-inch full-colour TFT multi-information display sits at centre. The big high-resolution feature-filled MID can be modulated via illuminated steering wheel controls that also answer the phone, apply voice activation, set the cruise control, and adjust the audio system.

Over on the centre stack is Nissan’s best infotainment system yet, complete with crisp, clear, attractive graphics, easy to operate touchscreen controls and a good size at 8.0 inches. The Platinum gets map and navigation functions along with the usual audio, phone, info and vehicle settings, plus a menu button for sorting through it all. While it worked well I found the display a bit shiny, its surface reflecting too much surrounding light. This didn’t allow for as much depth of contrast either, the blacks unfortunately not as black as they could be. Still it’s an impressive system that should satisfy most users, especially when it comes to operating system speed, its input reaction time rapid, especially when responding to GPS navigation coordinates. The impressive sound quality of the Bose audio system is also worthy of mention, while the backup camera includes dynamic guidelines to ease you into narrow parking stalls.

A dual-zone automatic HVAC system with microfiltration features a nice clear digital readout, while just below are variable temperature controls for dialing in either heat and or ventilation for the front two seats. All this luxury is accessible via proximity-sensing access while the Murano’s powerful standard 3.5-litre V6 can be brought to life by the push of a button, both features previously only available on the SL and Platinum but standard across the line for 2016.

That engine won’t wow with performance unless compared to some of its peers’ base four-cylinder powerplants, but its 260 horsepower and 240 lb-ft of torque come from a particularly smooth DOHC, 24-valve six-cylinder with continuously variable valve timing that gets mated to an even silkier smooth continuously variable transmission. The only letdown would be to those expecting the Murano’s racy styling to somehow translate into super-SUV performance, Nissan endowing the Murano with more than adequate straight-line acceleration plus an evenly balanced chassis with a nimble feel, albeit leaving serious performance-oriented duties to its Infiniti brand and therefore focusing most of its namesake models on pampering comfort. For this reason the CVT in question doesn’t include paddle shifters, which I have found less than stimulating when applied to other Nissan products anyway, 370Z and GT-R excluded, but the Murano is nevertheless perfectly suited to its key purpose, shuttling active lifestyle couples and average sized families around in absolute style and comfort.

Let’s face it, we’re moving towards a driverless society anyway, so we might as well settle in and enjoy the ride. To that end the Murano is one of my favourites, from its ultimately comfortable NASA-inspired “zero gravity” seats, swathed in perforated leather in the Platinum’s case, to its sublime ride and more than capable handling enhanced by my tester’s gorgeous 20-inch machine-finished alloys on 235/55R20 all-seasons, it’s a performer for those who live in the real world of bumper-to-bumper traffic and vehicle impounding speed limitations, which it should be said this SUV has no problem exceeding.

As roomy and relaxing as it is up front, much thanks to its powered tilt and telescopic steering column and eight-way powered driver’s seat with memory settings for both as well as the side mirrors, the second row is wonderfully comforting in its own right with plenty of leg and head room plus no lack of space side-to-side, a flip-down armrest with integrated cupholders at centre plus a panel on the backside of the front console featuring a powered USB plug and two-way seat heater controls for the rear outboard positions.

Everyone onboard should feel safe too, from the driver benefiting from enhanced LED headlight visibility and fatigue defying adaptive cruise control to all occupants protected via predictive forward collision warning and forward emergency braking, so equipped Muranos earning a Top Safety Pick Plus rating from the IIHS while all Murano trims achieve a slightly substandard four-star safety rating from the NHTSA.

On an even more positive note, Nissan enjoys top-10 placement in J.D. Power’s most recent 2016 Initial Quality Study, with its real ranking amongst competitive volume brands being fifth best, an impressive feat, whereas the Murano achieved third place in its Midsize SUV category. Nissan doesn’t fare so well when it comes to J.D. Power’s Vehicle Dependability Study, however, placing 27th out of the 32 brands surveyed, or 16th out of 20 non-luxury mainstream brands. But wait, it’s not all doom and gloom because amid the dark clouds was a beacon of bright light, the Murano that managed to pull off a best in Midsize SUV class ranking, the only other Nissans to shine being the Versa sedan (which we don’t get here in Canada) and the Maxima which both finished second in their categories. The first study surveys customers after 90 days of ownership, incidentally, and the second after three years, so the trend is moving in Nissan’s favour overall, but only time will tell if the happy owners in this year’s IQS will still be singing their cars’ praises three years later when the VDS questions them again.

A good reason to praise the Murano is cargo carrying capacity, the rear seatbacks hampered by a conventional 60/40 folding configuration instead of incorporating an optimal centre pass-through, but overall luggage volume increasing from 1,121 litres (39.6 cubic feet) with the rear seatbacks upright to 1,979 litres (69.9 cubic feet) when folded flat via handy cargo area levers or even better, a power release button located next to the driver’s left knee that lowers the 60-percent portion automatically, and when lowered the nicely carpeted floor is almost completely flat making it much more utile than average, while the sidewalls are carpeted too, following the Murano’s more luxe for less moola value-driven theme.

I was even impressed by the Murano’s fuel economy, my weeklong personal average coming very close to its claimed five-cycle rating of 11.2 L/100km city and 8.3 highway with AWD, the FWD version achieving a slightly better or 11.0 and 8.2 rating, neither of which is bad considering the drivetrain doesn’t include a lot of advanced features like direct-injection, cylinder deactivation, auto idle start/stop, brake regeneration, etcetera.

It would be easy to say the Murano is all about value, especially considering a fully loaded version like my tester would cost you more than $57,000 CAD at today’s Brexit-inflamed exchange rate if purchased in the U.S. (this review was written the day after Britain voted to leave the EU), but it’s way too stylish and competent to be relegated into needs-driven cost saving status. Like I said in the beginning, the Murano comes as close to premium-level luxury as the mid-size volume-branded segment gets, only lacking a few soft touch points and driving dynamic details to push it over the top. Those looking for a well-equipped, comfortable utility endowed with ample speed and good road manners should consider it.
©(Copyright Canadian Auto Press)
Car Shopping Tools