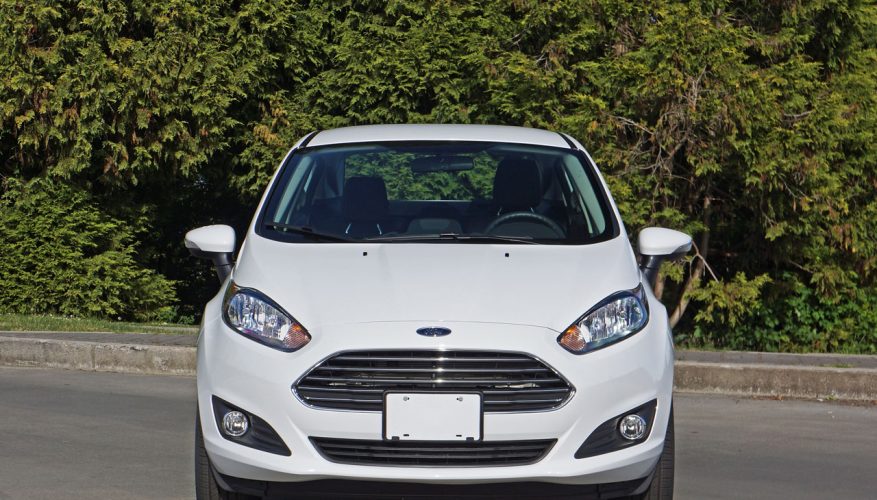 By: Trevor Hofmann
If you want to judge the core values of any brand, spend some time with its least expensive product. With Ford that entry-level model would be the Fiesta, a car that will surely surprise the uninitiated if given the chance.

The Fiesta is a handsome little sedan, especially in mid-grade SE trim with a few upgrades added, not to mention Oxford White paint. The stylish grille pulls cues from Mustang, albeit with chrome detailing befitting of a little luxe four-door, while the lower fascia incorporates some edgy aerodynamic detailing and sporty fog lamps. Large headlamps take up most of its front corners, while turn signals integrated into each body-colour mirror cap add a bit of upscale class. From the rear, an attractive set of red and clear-lensed taillights bookend a discrete deck lid spoiler, while the back bumper cap gets a diffuser style matte black plastic finisher for a sporty look.

Inside it’s a celebratory combination of organic shapes, glitzy piano black plastics, metallic trims and bright, colourful electronic displays, the primary gauges set up in twin-binnacle motorcycle style with aqua-blue-green needles and highlights plus the same Ice Blue colour used for the LED trip computer at centre, while the artfully sculpted dash top and instrument panel, which incidentally is constructed from a pliable rubberized synthetic that’s ideal for absorbing sound and improving tactile quality, gets a brilliantly graphical infotainment display protruding upward out of the centre, this being Ford’s class-leading high-speed Sync 3 interface boasting gorgeous graphics, enhanced voice activation, plus loads of standard and downloadable apps via Wi-Fi. Just below is a tightly packaged audio control panel while a really intelligently designed single-zone auto HVAC interface is positioned underneath.

While Ford makes no mention of “Special Edition” status the appropriately named SE’s seats are certainly special, although their impressive bolstering, unique use of three types of black fabric, one simply woven, another made from a thicker weave and the final choice being a particularly eye-catching hexagon patterned cloth straddling both sides of the inserts and bolsters, all stitched together with contrasting silver thread, makes me wonder if SE now stands for “Sport Edition” instead. Fortunately they’re also comfortable to sit in while providing excellent lateral support, a good thing as the Fiesta performs well for a subcompact four-door.

Pull your shades from the sunglasses holder in the overhead console, grab hold of the comfortably padded leather-wrapped steering wheel, scroll through the audio controls on its left spoke to find a favourite radio station and turn up the volume, pull the gear selector all the way back to its sportiest “S” mode, and hit right foot on throttle. Its zippy 1.6-litre four-cylinder spins past 6,000 rpm to maximize its 120 horsepower and makes its peak torque of 112 lb-ft even sooner at 5,000 rpm, the base engine’s output plenty for a vehicle weighing in at just 1,169 kilos (2,577 lbs) with the five-speed manual or 1,192 kg (2,628 lbs) as-tested with the six-speed PowerShift autobox. The PowerShift name means it gets a thumb toggle on the shift knob for rowing through the gears, a handy alternative to shifting the entire shift lever that still provides more control through corners and the ability to short shift for saving fuel.

And yes it’s efficient, with a combined city/highway rating of 7.6 L/100km no matter which transmission you choose, plus it handles, not like a Fiesta ST, that car a little dynamo, but still the SE will run rings around most of its rivals while still providing a surprisingly compliant ride, partly due to standard Torque Vectoring Control that automatically applies braking to the front inside wheel so that more power goes to the more adherent outside wheel, as well as upgraded 16-inch alloys on 195/50R16 all-seasons. The gearbox shifts quickly and smoothly, the engine also refined for its size, the entire car striking an excellent balance between performance and comfort. Even braking is strong, the Fiesta only getting rear drums to go with its front discs, albeit standard ABS with electronic brake-force distribution, while its agile suspension is just independent up front with the rear setup a twist beam design. Again, it doesn’t seem to matter, at least when it comes to driving dynamics.

When it comes to interior roominess and cargo capacity a less complicated torsion bar suspension takes up less space and therefore benefits both, the Fiesta providing plenty of hip, shoulder, leg and head room up front and about three inches in front of my knees when the driver’s seat was positioned ideally for my five-foot-eight frame, plus approximately two to three inches above my head. The rear headrests are very comfortable due to being quite tall, while lower back support is superb. I also like the way Ford has finished the backsides of the front seats in the same nice woven cloth as the sides and bolsters. There are seatback pockets for magazines or what-have-you, but no centre armrest or anything fancy like rear seat heaters. Even the heatable cushions up front are a simple on/off design, but they got plenty warm when set to their single temperature.

The rear seatbacks fold flat in the usual 60/40-configuration, expanding on the reasonably large 362-litre (12.8 cubic-foot) trunk, but need to be lowered from the side doors via buttons on the seatbacks rather than cargo area releases. On the positive Ford includes fold-down rear headrests so you don’t have to remove them in order to fit them behind the front seats when laid flat, while if left this way when no one is occupying the rear seats they make rearward visibility a lot better too.

My tester included the $1,250 automatic transmission, an $1,150 upgrade package that adds the chrome bezels around the fog lamps, eight-spoke 16-inch rims, rear spoiler, sporty upholstery, adjustable lumbar support, leather-wrapped shift knob with chrome insert, Sync 3 infotainment system, satellite radio and more, the $550 Comfort package which includes the heatable front seats, heatable side mirrors and auto HVAC system, plus a $100 engine block heater, that pushed the price up from $17,049 to $20,099 plus freight and dealer fees, which might be considerably more than the base model’s $16,049 starting price, but it was a lot more car.

You can still add plenty of features too, such as a more powerful and efficient direct-injected and turbocharged 1.0-litre Ecoboost three-cylinder engine, remote start, navigation, a Kicker subwoofer, a powered moonroof, etcetera, and that’s just in SE trim, whereas the Titanium is a little luxury car with proximity access, pushbutton start, leather upholstery, an auto-dimming rearview mirror, a backup camera with guidelines, Sony audio, reverse parking sensors, and more. On that note I’m not going to delve into the 197-horsepower Fiesta ST, only to say it just might be the most fun you’ve ever had on four wheels.

Bringing you back to earth, the Fiesta Sedan SE is not only a lot of car for the money, it’s a lot of car period. Sure it might be small, but it’ll make a big impact on your life if you just give it a try.
©(Copyright Canadian Auto Press)
Car Shopping Tools