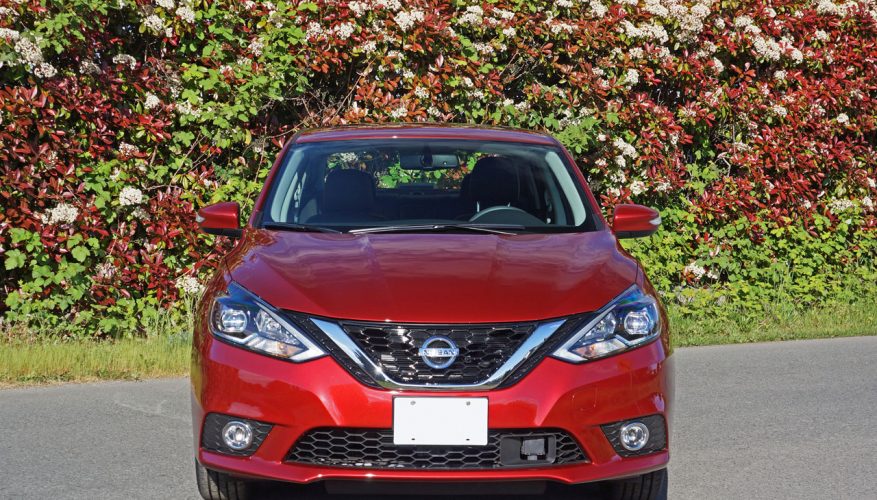 By: Trevor Hofmann
Nissan has given the compact Sentra sedan a significant refresh for 2016, continuing a tradition of modeling its smallest four-door after its mid-size Altima. The result is much more appealing styling up front where the brand’s more distinctive V-shaped grille now dominates the frontal design along with unique scalloped headlamps that are once again bordered by LED DRLs in top-line SL trim. It gets a more aggressively shaped lower fascia and reworked hood too, plus new wheels all-round, while changes to the rear are much more subtle including slightly reworked taillight lenses and a mildly remolded rear bumper. Inside, a new primary gauge cluster sits ahead of an updated steering wheel, while the centre stack gets some trim detail changes depending on the model.

So how have the changes affected the market? That depends on which market we’re talking about. In the U.S., response to the new Sentra has been quite good with 15.3 percent gains so far this year, but its first five months of the year in Canada haven’t proved positive with a 0.9-percent drop in sales compared to the same period last year. That’s certainly not how a brand wants a redesigned model to be received, but some of the segments’ top sellers have really sharpened their game this year and the Sentra’s mid-cycle update isn’t enough to keep it from seeming old and dated.

I suppose there’s another way to look at it. The Sentra comes across as being more about tradition than anything edgy or tech-oriented, as if it was designed specifically for those who want to keep things the way they’ve always been, and to that end it does an amiable job. I don’t mean that as a slight, because not everybody wants something that looks more like a spaceship than a car, and the Sentra is a conventional compact sedan from the outside in.

The dash layout is just as straightforward as the exterior design. The new primary gauges just mentioned still come with analog tachometer and speedometer dials plus fuel and temp meters, they’ve merely positioned the latter two in the bottom section of the larger dials to make room for a bigger multi-info display in the centre. It was big, blue and high resolution in my tester, but it’s not driver configurable like others in the segment, merely showing real-time and average fuel economy via a nice bar graph, plus distance to empty, a gear selector readout, a clock, exterior temperature display and various active safety indicators up top that are a bit on the small side. It’s all controllable via new switchgear just below the left steering wheel spoke where the old phone buttons were, these now switched over to the same position on the right side of the redesigned and sportier looking wheel.

The electronic interfaces and near vertically mounted shifter on my tester’s centre stack are now surrounded in piano black lacquered plastic instead of wood tone trim, which is certainly less traditional but not a personal favourite as it scratches easily and is a magnet for dust. My SL featured what appears to be the same 5.8-inch infotainment touchscreen up top, which is smaller than some others in the class and being that it’s not seamlessly integrated within the dash design still looks like a dual-DIN aftermarket upgrade, while its two top dials and vertically stacked buttons to each side aren’t touch sensitive, but they give direct access to the majority of system functions such as audio source, media, track/station scrolling, navigation input and mapping, rearview camera setup, phone setup, screen dimming, and app selection, the latter including SiriusXM Traffic, Siri voice commands, Nissan Connected services, vehicle settings, and a separate My Apps button that accesses Facebook, Google Search and more if set up to do so. A large LCD display-enhanced dual-zone automatic HVAC interface sits below the infotainment system.

All of this comes in a fairly well finished cabin boasting a full soft touch dash top that wraps all the way down to the instrument panel’s midpoint ahead of the front passenger, while additional soft surfaces include fully padded leatherette door inserts that butt up against contrast stitched leatherette armrests, the centre armrest following the same theme. Other than the seats, which are nicely upholstered in perforated leather, that’s it for pliable surfaces. Yes, this is the top-line Sentra and the front door uppers aren’t covered in soft synthetic like many of its peers, nor are the A-pillars finished in fabric, but these items aside much of the interior is impressively upscale including attractive silver accents in key areas including the steering wheel that’s also leather-wrapped in SL trim and comfortably shaped, plus all of the switchgear on that wheel and throughout the cabin is high in quality if not particularly rich looking.

Yes, I realize I’m critiquing a compact car because it doesn’t look rich, which wouldn’t make a lot of sense unless others hadn’t just completely rewritten the rules in this category by delivering styling, quality and features that make most premium-branded compacts look like they’re lacking, which might seem unfair to Nissan and a number of others in this class, but such is life in the auto industry fast lane. Some win in a big way and others are regularly outsold more than four to one, which is the case between this segment’s top seller and the Sentra. To be fair to Nissan, the Sentra, which is only available as a sedan yet goes up against models that also come in two-door coupe and hatchback body styles, regularly outsells others in the compact segment, some even by two to one, so it’s hardly without a loyal following.

This is for good reason, as it’s one of the best riding cars in its class whether cruising the city or touring the highway, while it’s also nice and stable at high speeds. It handles corners respectably until rough patches of pavement unsettle its torsion beam rear suspension, although the SL’s Active Understeer Control helps minimize front wheel push when attempting to corner faster than the 205/50VR17 all-season low rolling resistance tires can grip, and braking is strong thanks to rear discs that get added to the SL, and yes, that means rear drums are standard which is unusual in the compact class. As you may have already guessed the Sentra is not even remotely sporty. Its suspension is too comforting, engine one of the weakest in the class at 130 horsepower and 128 lb-ft of torque, and continuously variable transmission fabulously smooth but completely non-engaging, although it moved off the line with reasonable quickness. Nissan smartly doesn’t include paddle shifters or even manual mode, the Sentra all about relaxed, comfortable driving and better than average fuel economy that’s rated at 8.0 L/100km city and 6.1 highway.

While the ride is comfortable the seats weren’t to my liking despite the SL’s powered lumbar support and rudimentary power-adjustment including fore and aft, up and down, plus recline, because you don’t seem to sit in them but rather on top of them. What’s more, there’s also almost zero lateral support from the near non-existent side bolsters, which caused the need to use one arm for bracing while testing it through the corners. Again, it’s not built for speed, but it’s plenty spacious all-round. Ditto for the rear where I found five to six inches ahead of my knees when the driver’s seat was positioned for my medium-build five-foot-eight frame, while there was also ample shoulder room, probably about four inches to the door, although there were only two to three inches above my head because the rear seats sit quite high. They’re also very firm like those in the front and likewise you sit on top of them rather than in them, but lower back support is good and there’s a handy flip-down centre armrest that includes twin cupholders.

Additional areas where the Sentra comes up short include a roofliner that’s fabric although appears as if it’s molded out of cardboard, plus a sunglasses holder with a nosepiece that’s too big and square to properly hold sunglasses.

While the 2016 Sentra starts at a very approachable $15,898 plus freight and dealer fees, when loaded up with SL features it starts and ends at $25,998 unless you want to add on accessories, there are no factory-installed options. SL upgrades not yet mentioned include LED projector headlights with LED accents, LED mirror housing turn signals, proximity access with pushbutton ignition, LED overhead lights, mood lighting, tilt and telescopic steering, variable intermittent wipers, an auto-dimming rearview mirror, Bluetooth hands-free phone plus text and email messaging, great sounding Bose audio with eight speakers including two subs, USB and aux ports, satellite radio, Bluetooth wireless streaming, leather upholstery, heated front seats, a six-way powered driver’s seat with two-way powered lumbar, a powered moonroof, 60/40-split rear seatbacks that expand the use of an already large 428-litre (15.1 cubic-foot) trunk, and some pretty impressive premium features such as adaptive cruise control, blindspot warning with rear cross-traffic alert, forward collision warning and forward emergency braking, which when equipped earns the Sentra a coveted IIHS Top Safety Pick Plus rating, although the NHTSA only gave the car four out of five stars after crash tests.

Additionally, Consumer Reports gave Nissan fairly poor marks for dependability in its 2016 report card on reliability, placing it behind all of its main competitors except for Dodge and Mitsubishi as far as carmakers who compete in this class go, while only Dodge and Ford are rated lower in J.D. Power’s most recent Vehicle Dependability Study, but that study surveys owners of three-year old models whereas the third-party analytical firm’s most recent Initial Quality Study still rates Nissan below average but higher up the pecking order, plus the Sentra managed to earn best in class status.

If you already own a Sentra or are looking to purchase one, I don’t want my review to turn you off. The fact is it’s a very competent car in the areas that matter most while delivering a lot more luxury than many will expect from a small sedan. It’s just a traditional peg trying to fit into a high-tech hole, and due to this it’s not as popular as a number of others that it competes against. If it suits your style I certainly can recommend it.
©(Copyright Canadian Auto Press)
Car Shopping Tools