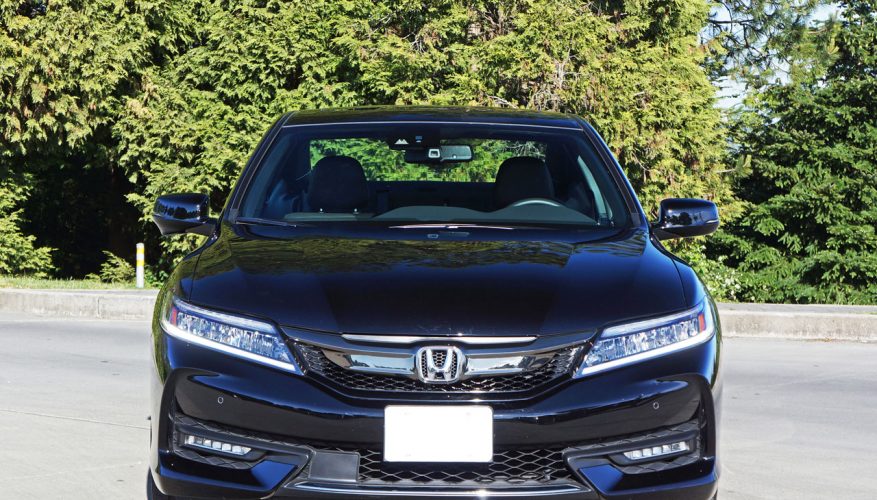 By: Trevor Hofmann
If I told you I got more looks from passersby while driving an Accord than the majority of other cars I’ve driven this year, many of which have been brightly coloured near exotics, would you be surprised or knowingly nod in complete understanding that the car driven was the new ultra-stylish 2016 Accord Coupe? Not that the Accord Sedan isn’t a looker as well, it’s just so common that we’ve all grown accustomed to its handsome face.

Yes, the four-door Accord doesn’t get the respect it deserves from enthusiasts, unfair being that it’s one of if not the best mid-size sedan in the industry. It does everything asked of it and then some, but at least it gets suitably rewarded with strong sales and a high level of owner loyalty. Over the first five months of 2016 its Canadian sales have passed Ford’s Fusion for second-place in the mid-size segment behind the Toyota Camry, although to be fair neither of these two competitors boost their sedan sales with a sporty two-door offering.

Being that Honda doesn’t provide separate sales numbers for the Accord Coupe, I’m going to guess it isn’t a big seller compared to the Accord Sedan, the two combining for 14,465 sales last year and another 5,858 so far this year. Deliveries were up considerably over the first three months of the year but have softened since, with the overall gain just 2.8 percent. Still, it’s better than the Fusion’s 22.9 percent slide the other way. As for Accord Coupe competitors, since Nissan’s Altima Coupe departed a couple of years ago there simply aren’t any.

Some time ago personal luxury coupes were a North American staple, with models like the Chevy Monte Carlo, Chrysler Sebring Coupe, Ford Thunderbird, Pontiac G6 Coupe and Toyota Solara reasonably strong sellers, but so much has changed since then. Still, the attention my Accord Coupe Touring received during my weeklong test makes it clear we haven’t completely lost our passion for two-door hardtop performance luxury just yet.

Inside, it looks just as modern albeit doused in plenty of near-premium luxury. It doesn’t quite go to the level that Acura might if it were still building its lovely Legend Coupe or CL, the latter last tested in its final 2003 model year, Honda not choosing to wrap the Accord Coupe’s roof pillars in fabric or the finish lower dash and door panels in soft touch materials, although the dramatically shaped dash top is made from a very high-quality pliable synthetic that travels right across the door uppers. Each door insert is nicely trimmed out too, with padded and stitched leatherette folding into the armrest, the same application benefiting the centre armrest. The rest of the Accord Coupe’s cabin is covered in matte finished durable looking harder plastics.

Spiffing things up are pseudo engine-turned metallic inlays across the instrument panel and doors as well as a slightly lighter metal-look trim under the latter curving downward to dress up the door pulls, and while this is all tastefully applied Honda went a bit overboard with black lacquered plastic. It looks just fine on the steering wheel spokes, the centre vents, and around the infotainment plus dual-zone auto HVAC interfaces, but it’s too much of a dust, dirt, grime and scratch magnet when applied to the bottom portion of the centre stack and across the entire lower console. My tester was seriously scratched up on these surfaces, not to mention the chromed plastic around the cupholders, and while we’re on the subject of shiny black surfaces scratching easily, my loaner’s otherwise gorgeous Crystal Black Pearl exterior paint was a mess after only 7,192 kilometres. Such a shame, and reason enough never to purchase a black car.

Fortunately, Honda offers the Accord Coupe Touring in a slightly easier to live with medium-grey dubbed Modern Steel Metallic, plus sporty San Marino Red, eye-catching electric blue Still Night Pearl, and White Orchid Pearl, which will probably look best after three to five years of use. Depending on the exterior colour you get the choice of Black leather upholstery like my tester, or Ivory.

That brings us back inside where the primary gauges are mostly analog, which made the Monday morning when I picked it up feel like throwback Thursday, especially after spending time in the literally brilliant new Civic Coupe Touring. That Civic is a segment leader in this respect, although the entire industry is on the verge of going purely digital. The Accord’s gauges look good, mind you, with a centre-mounted speedometer that sticks out at least an inch from the other gauges before getting carved out inside to show small mph digits around a monochromatic readout at centre, this carryover display incorporating the odometer, temperature, range to empty and other functions.

Over on the centre stack, just to the right of a bright red engine start/stop button, Honda has taken the double infotainment display route like Acura, which allows simultaneous use of features such as monitoring audio info up top and navigation mapping on the lower touchscreen. The top display is managed by steering wheel controls, first a menu button and then by one with a pages graphic that lets you scroll through various functions such as navigation, vehicle settings, etcetera, after which you can use the four-way dial controller to dig deeper. It’s more of a large multi-info display with the lower screen for full use of navigation, phone, audio, HondaLink and auto settings systems, all enhanced with Apple CarPlay and Android Auto for more seamless integration with your smartphone.

Of note, the remaining steering wheel switchgear includes audio, phone, and voice commands to the left and cruise controls to the right, which happen to be adaptive. Not missing a beat, Honda also includes a wireless device charger at the base of the centre stack just ahead of the shift lever, while a simpler although still appreciated padded sunglasses holder sits within the overhead console that also houses lighting, a toggle for the powered moonroof and a universal garage door opener.

I’ve mentioned some of this top-line Touring V6 model’s features already but should touch on a few others before moving on, with additional items exclusive to this trim including Honda’s Variable Cylinder Management for the engine when hooked up to the automatic, plus active engine mounts to enhance refinement, amplitude reactive dampers to improve the ride and handling, while automatic models also get remote start along with Honda Sensing features such as adaptive cruise control, forward collision warning with collision mitigation braking, and lane departure warning with mitigation via lane keeping assist, all helping to earn the car a coveted IIHS Top Safety Pick Plus rating, whereas all Accord Coupe trims get a full five stars across all NHTSA crash test categories.

The leather-clad powered seats live up to Honda’s usual high standard for overall comfort with an emphasis on good lower back support, although there’s not a lot of lateral bolstering to keep driver from sliding around when slinging it hard through tight fast-paced corners, requisite arm-bracing not the best when both hands should ideally be in a relaxed state on the wheel. On the positive the Accord Coupe Touring likes to go fast, this model’s 3.5-litre V6 an absolute jewel of an engine providing 278 horsepower and 252 lb-ft of torque while its $1,000 optional six-speed automatic benefits from paddle shifters that increase the car’s fun factor effectively, the gearbox providing fairly quick shifts when its lever is pulled all the way back into “S” mode.

The car stays flat through sharp quick corners too, reacting better than expected despite delivering a ride that comes close to pampering on less than ideal city streets, the Touring upgrades mentioned earlier improving on the Accord Coupe’s inherently well balanced MacPherson strut front and multi-link rear suspension setup that even benefits from a front strut tower brace under the hood.

Driving aggressively won’t get you close to the Accord Coupe Touring V6’s claimed five-cycle EnerGuide fuel economy rating of 11.4 L/100km city, 7.3 highway and 9.5 combined, slotting the gearbox into “D”, pressing the big green dash-mounted “ECON” button and going lighter on the throttle of more use. This said these numbers aren’t that much higher than the manually shifted 181 horsepower base four-cylinder car’s 10.3 city, 7.2 highway and 8.9 combined rating, although it starts to pale when comparing it to entry engine’s optional CVT that does somewhat better with an estimated 9.1 city, 6.8 highway and 8.0 combined. The V6 manual, incidentally, is thirstiest with a rating of 12.9 city, 8.3 highway and 10.9 combined. Still, for all that power and driving enjoyment I’d be willing to put up with a little more cost at the pump.

All this performance and luxury in a car that offers loads of room up front and fits fairly large adults in the rear, my five-foot-eight medium-build frame leaving about three to four inches in front of my knees, plenty of room for my feet, approximately the same three to four inches above my head, and no shortage of space on either side. Honda doesn’t provide a centre armrest in back, but armrests are fixed to the side panels, albeit hard plastic ones, while the rest of the rear panels are hard plastic as well, so it’s not exactly a luxurious experience for those in back, but there are handy dual bins within those side armrests for cell phones, kids toys, or what have you. Additionally, the rear seatback folds forward for more cargo than the 379-litre (13.4 cubic-foot) trunk provides if needed, but it’s not split so you can’t put a child in back and all your ski gear to one side.

Still, the Accord Coupe Touring V6 provides a wonderfully rare combination of performance and luxury in a fabulous looking package for a $35,990 starting price that can’t be found amongst its only viable competition, premium-branded two-door models that cost tens of thousands more when equipped with similar features. For that we salute you Honda. The Japanese brand still has enough soul to stick with a segment that no other mainstream volume brand has, and they’ve done a fine job of it too. If you want something truly different I recommend an Accord, Coupe that is. You’ll certainly stand out from the crowd.
©(Copyright Canadian Auto Press)
Car Shopping Tools