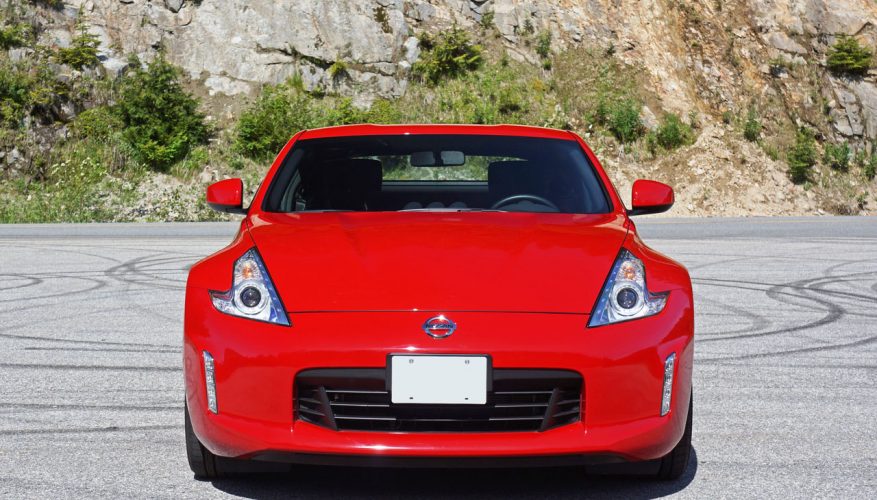 By: Trevor Hofmann
Say what? A Porsche 911 costs how much? $96,200? And you can get into the similarly powerful, equally dynamic, almost as premium, techier, nearly as legendary and arguably as good-looking 2016 370Z for less than $30k? Something’s wrong with this picture.

You’d think with such a logical choice available that performance car fans would be bowling over Nissan salesmen at the door in order to be first in line, but during 2014 the German luxury brand sold nearly twice as many 911s than the Japanese giant hawked Z cars, although the 370Z wasn’t priced so kindly in last year’s $43,998 base Touring trim. In April the much more aggressively priced 2016 model hit the road running and showroom traffic drove up commensurately with YTD January through July sales reaching 407 Z cars sold, last month accounting for 98 deliveries alone, so total 2015 numbers should easily outpace 2014’s second-worst Canadian tally of 411 units. Truth be told, the 911 sales figure I just quoted was for its best year ever, its usual sales in the high-500 to mid-600 range, so it’s entirely possible the 370Z will outsell the 911 this year, or at least after its first full year of new $29,998 pricing.

Now that we’re being totally honest, the venerable Porsche is mighty quick off the line with a zero to 100km/h sprint of just 4.8 seconds compared to the 370Z’s 5.6-second charge, although the new 350 horsepower Nismo model cuts that time down to about 5.0 seconds flat. So, if taking on 911s is still part of your agenda, you’ll need to spend $47,998, plus $1,700 for freight and pre-delivery prep on either model. Still, that’s about half the price of Stuttgart’s super coupe. I just spent a week with a new $180k 911 GTS that was spectacular, of course, and just as eagerly hope to get time behind the wheel of the new Nismo, but as it stands Nissan first wanted to shed light on this much more affordable base Z car for reasons I completely understand.

In comparison the new base 370Z is mechanically identical to last year’s model, meaning that its front mid-mounted 3.7-litre V6 puts out 332 horsepower and 270 lb-ft of torque, that latter number the biggest reason the 911 gives it such an ass whipping off the line. Just the same the Z feels plenty fast from the seat of the pants, whereas the carbon-fibre composite driveshaft that connects its transmission to rear diff can’t be found on any stock 911. More importantly, compared to most cars that the Z actually competes against, such as Scion’s FR-S and Subaru’s near identical BRZ, it’s a helluvalot quicker; the Toyobarus are in the mid-seven-second range. Then again Hyundai’s Genesis Coupe performs very similarly to the Nissan’s sport coupe with a mid-five-second sprint to 100km/h, although all of these rivals just mentioned are larger 2+2 coupes, whereas the 370Z is exclusively for two.

Depending on your point of view this will either be a boon or bane, but I recommend taking a look into the Z car’s storied past to see how well early two-seat models hold their value against those with rear seatlets, and it’ll all start to make sense. The same holds true for classic sports cars in general, but this brings up an important point. I mentioned the 370Z’s “nearly as legendary” status in this review’s opening statement due to a lineage of Zs tracing back to 1969 with countless motorsport events strewn in between, but try to do likewise with the Hyundai, Subaru or Toyota models and you won’t need to look back very far. Certainly each brand has had moments of brilliance with sports cars of yore and some with significant racing achievement, but the specific models that compete for today’s sport coupe customers can only look back into their respective brands’ pasts to add credibility, not the cars themselves. This won’t matter one iota to some performance car fans but it means a lot to Z car enthusiasts, in much the same way that purity and pedigree is everything to diehard 911 aficionados.

One such Z zealot approached us while photographing our Solid Red test car up one of our local mountains, and unlike the majority of wannabe lookie loos that drool over our cooler press cars while going on and on telling stories that only remotely relate to something similar with four wheels while we’re just trying to get our work done, this guy pulled up beside us on one wheel after impressing with myriad sport bike acrobatics. A professional motorcycle stunt rider (name withheld so as not to incriminate him for playing in a public park), he not only admitted to being a longtime Fairlady fanatic, but knew more about this latest 2016 model than I did at the time, even claiming to be planning to buy one thanks to its new more affordable pricing. I don’t know if he’s now amongst the previous sales statistics, but if not he’s likely working towards it one frogger, tank stoppie, and special K burnout at a time. As it turns out we had something in common (and I’m not talking about wheelie-induced road rash scar tissue), his desire to be photographed doing stunts with the Z in the background and our wanting to get his stunts into our photo gallery, the result which can be seen in the latter.

Getting up to that photo location was even more fun than shooting the stunts, the entry-level 370Z only available in six-speed manual trim and therefore as enjoyable to drive as Z cars come, Nismo aside. Just the same the base Z is so capable through the corners that it’s almost anticlimactic, the 225/50WR18 Yokohama Advan Sport high-performance front tires laying stubborn claim to their lane despite the speed attained and the 245/45WR18s in the rear never straying their course no matter how hard I pushed it around tight fast-paced bends. It didn’t take long to realize that the 370Z’s breaking point was way beyond my comfort level, not in taking it to its limit but rather in getting caught by the law doing so. Of course, if you purposely drive it beyond its limits (and every car has limits) its rear rubber will break loose and let you drift away ’til you free your soul, but for those of us living life in the gray who’d rather cut the perfect apex at the highest speed possible, the Z is an ideal scalpel.

Making all this possible is a two-link double-wishbone aluminum front suspension with an aluminum subframe plus a four-link aluminum rear setup, front and rear stabilizer bars included, whereas the car’s aluminum hood, doors and hatch help reduce its curb weight to a slight 1,497 kilos (3,301 lbs) so that its sport-tuned ripple-control dampers aren’t stressed to the max when forced to iron out road wrinkles. Open the hood and a three-point front strut tower brace hovers over a nice looking composite engine shroud, while a rear underbody V-brace remains on the sights unseen list.

Even though much of this kit is the same as on previous 370Zs, the 2016 feels even more stable at speed than others I’ve driven on road and track, a then new 2010 model having become disconcertingly twitchy under hard braking while approaching the corkscrew at Laguna Seca, but this said I’m going to guess that regular tweaks to the suspension setup since then, and possibly this slightly lighter car’s decontented features menu aiding in this respect, have turned it into a more balanced braker with binding power that remains resolute, albeit with a much more forgiving attitude while applying prodigious pressure to scrub speed off quickly.

I must admit to finding it a bit challenging to get smooth with the shifter in the city at first, but after a bit of tooling around town I managed to master the clutch take-up and therefore was able to move away from standstill more cleanly without any abruptness at takeoff. This brings up an important 911 comparison point, by the way. Porsche might trump Nissan by incorporating a seven-speed stick compared to the Z’s six-speed mixer, but the 911 has spat on everything sporting by removing the 911’s manual handbrake lever and replacing it with an electronic parking brake. Try taking off from a steep hill with the manual 911 and its hill-holder system sticks so tenaciously that it bogs down the engine and stalls the car. After you do this a few times in a row and people in adjacent cars start laughing at the idiot who can’t drive his six-figure supercar to save his life, you’ll be begging to trade it in on a Nissan Micra to escape embarrassment (a mighty fun Nissan to drive too, by the way), but you won’t experience such trouble in a 370Z thanks to its classic handbrake lever.

Most of its rivals have a similar list of standard gear, as does the pricy 911, but one thing that none of the above offer is a steering wheel with tilt and telescopic capability that also moves the entire electroluminescent gauge pod for ultimate instrument visibility no matter your height, while shocking but true, there’s no way to get proximity-sensing keyless access with pushbutton ignition with the 911 or any Porsche for that matter, the Stuttgart company shunning this ultra-convenient technology for some reason and Nissan making it standard with the 370Z.

All of this equipment comes in a cabin that’s so much nicer since this newest Z34 generation succeeded the Z33/350Z in 2009, with wonderful detailing including the model’s classic trademark three-bay gauge cluster atop the centre stack, a really high-end soft-touch dash top that reaches right down to the mid-portion of the instrument panel and across the door panels, although not just covering the upper window sills but right down near the bottom of each door too. Even nicer, that centre stack I just mentioned is covered in a padded leatherette that looks and feels just like leather, stitched down the middle with contrasting light grey thread. The rich looking surface treatment wrapped right around the shifter as well, not to mention on the very welcome kneepads that protected as well as looked good. The doors also get attractive woven cloth inserts to match the bolsters on the fabric-covered seats, and the latter buckets don’t only look good but support in all the right places to keep you fastened in place during aggressive maneuvers. As expected the rear cargo area is small, but there’s extra space behind the seats if you’re not too tall.

The 370Z is also extremely quiet, delivering Infiniti levels of noise reduction despite its Nissan badge. I suppose this makes sense being that it shares underpinnings and its drivetrain with the luxury brand’s Q60, but as impressed as I was with its refinement I’m concerned its engineering team went a bit overboard in their quest to shoot upmarket. Dare I say the Z is too quiet? I hate to admit it, but the wonderful award-winning VQ engine makes no satisfying noises at all. How I miss the old 3.5 and its sonorous exhaust note, as this mill makes a diesel sound exciting. Can’t they pump in an artificial engine and exhaust soundtrack through the stereo system like the 911’s Sound Symposer? Don’t come down too hard on Porsche for this faux audio track because BMW does the same thing with its new M3 and M4, while Ford just started faking its Mustang engine note. Yes, I know this seems like sacrilege to a Z fan, but millions of F1 fans can’t be wrong, the song of the engine is an important part of the spectacle we pay big bucks for and this sexy looking ultra hot sports coupe sounds sadly anemic.

Fortunately the base 370Z’s stock stereo might look remedial but sounds pretty good so I amped up The Smiths How Soon Is Now, slotted the short-throw shifter into first, added revs, eased in the clutch and then let it loose, an immediate reminder that there might not be much bark to this beast but there’s plenty of bite for the buck.
©(Copyright Canadian Auto Press)
Car Shopping Tools