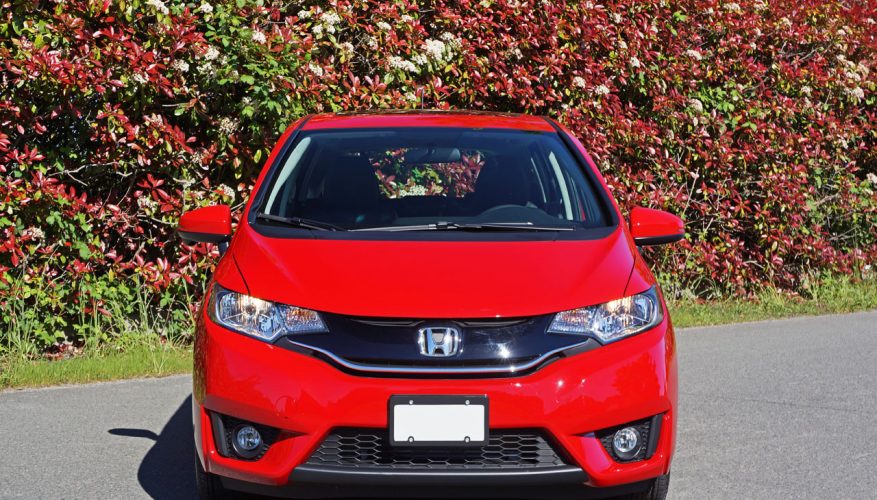 By: Trevor Hofmann
If you’re looking to buy your first new car or thinking of downgrading into something more affordable there’s plenty available in Canada’s subcompact market segment. A total of 14 (soon to be 15) models are vying for your attention, with the segment split up into three segments. The most popular are regular subcompacts positioned just below compact models, the Honda Fit being reviewed here fitting into this category, while below that are smaller city cars that offer anywhere from two to five seats albeit abbreviated versions in back and narrower overall, while there is also a new breed of full and partial electrics either available as dedicated models or trim lines of gasoline powered versions. I’m not going to run through the entire list and make comparisons in this review, but I will recommend you check out this Fit in your quest for the ideal ride.

First off, there is no electrified version of the Fit in our market, the Fit EV only available in six U.S. states and other world markets. Oddly Honda, the brand that created the first modern-day hybrid, only offers a single hybrid model in our market, the incredibly slow selling two-seat CR-Z sports car (last year Honda sold a grand total of 55 CR-Zs despite it being an impressive little car), this compared to 9,088 examples of the Honda Fit.

When 2015 came to a close the Fit stood fifth out of 15 subcompact competitors, but since then it’s been gaining sales traction with a fourth-place ranking over the first five months of 2016. Considering the third-place car is actually two models (a hatchback and a sedan) with the same first name, the second-place model is one of those tiny city cars that starts below $10k, and running first is a Korean-made subcompact (also available in sedan and hatch) that’s priced lower than the Fit as well, Honda is doing very well with its smallest North American offering, which incidentally is only available as a hatch and starts at $14,790 plus freight and dealer fees.

Separating the Fit from mere mortal subcompacts is the revolutionary “Magic Seat” system in back that not only folds flat for hauling gear in the usual 60/40 configuration, albeit with a total of 1,492 litres (52.7 cubic feet) available a much roomier one than any competitor, but you can also flip the lower cushions upward to convert the rear seating area into a cavernous cargo hold. This is especially useful for loading in taller items such as bicycles or large plants you don’t want to get crushed. With the seats like this you still get 470 litres (16.6 cubic feet) of luggage space behind the seatbacks, which of course remains the same if you’re filling up the rear seats with friends, kids, parents, grandparents, dogs, or whoever else you want to strap in.

While the Fit was redesigned for the 2015 model year the Magic Seat system isn’t new, although a slightly larger car has allowed for a bit more room inside, the numbers being 139 litres (4.9 cubic feet) of additional interior volume including 122 mm (4.8 inches) more rear legroom. Of note, if you’d like even more space and prefer an SUV’s ride height and styling Honda offers this same seating system in its new HR-V, but we’ve already covered that model multiple times so we’ll leave it for now.

If this was all the Fit did well and the rest of the car was merely average I’d still recommend it, but such is far from the case. Sitting in the wonderfully comfortable driver’s seat there’s nothing but black lifeless screens ahead, that is until you press the bright red start button and all those digital panels come alive in sharp contrast, full colour and high resolution. The primary gauges include a speedometer at centre, tachometer to the left and a fuel gauge along with other readouts and a trip computer to the right, the latter controllable via steering wheel switchgear that also redundantly operates audio, phone, voice-activation, multi-information display, and cruise functions, while over on the centre stack is a large infotainment display up top, mine upgraded with navigation plus a multi-angle backup camera with active guidelines, the usual audio, phone and vehicle settings plus loads of included and downloadable apps, and below that a purely touch-sensitive dual-zone auto HVAC system that’s so far above anything else available in the mainstream volume-branded subcompact class it’s shocking.

As you may have guessed the car I was driving wasn’t base, that DX model price quoted previously considerably more down to earth. The version tested here is in $21,590 top-line EX-L Navi trim upgraded to $22,890 thanks to an optional automatic CVT, a car vying for premium status other than a near complete lack of soft touch surfaces or other traditional luxury trappings such as cloth pillars, genuine wood or metal accents, etcetera. We can leave such niceties to much more expensive Mini 5 doors, the Fit, as noted, more to do with practicalities, albeit this one a pretty high-tech pragmatist. Instead, the EX-L Navi gets a lot of nice satin-silver faux metal to brighten up the cabin, plus some exclusive features like leather upholstery, a leather-wrapped shift knob to go along with the leather-clad steering wheel pulled up from the lesser EX, the automatic climate control system, voice recognition and navigation-infused infotainment system plus the pushbutton ignition system noted earlier, the latter combined with proximity sensing access, the infotainment system also including satellite and HD radio, and the car’s mirror housings upgraded with a set of LED turn signals.

All Fit trims also come standard with Honda’s direct-injection, 16-valve, DOHC, i-VTEC-enhanced 1.5-litre four-cylinder engine and a six-speed manual gearbox, although as noted earlier mine was upgraded to include its optional continuously variable transmission with, get this, paddle shifters. Normally paddles get me somewhat excited when an automatic is the only option, and to be fair they came in handy when downshifting during a couple of sporty test runs, but they don’t do more than offer a placebo effect when upshifting, the CVT best left to its own very smooth and capable devices when trying to gain speed. The engine accelerates well with a considerable 130 horsepower and more than reasonable 114 lb-ft of torque, the Fit fairly lightweight at just 1,201 kilos (2,648 lbs) as tested or 1,177 kg (2,595 lbs) with the manual and therefore hardly much of a drag on the powertrain.

When pushed hard its MacPherson front and torsion beam rear suspension setup is quite sporting, helped somewhat by my tester’s larger wheels and tires, although its tall yet stubby profile and narrow stance means that body roll makes itself uncomfortably known as soon as the first turn begins to bend. While a bit unnerving to those uninitiated the Fit holds its line admirably, causing slightly more speed through the next corner and so on, its road-holding surprisingly capable. Still, I doubt most buyers will ever find out, the majority I see trundling by being kept on a short leash, so to speak, their owners more likely concerned with fuel economy than duplicating McLaren-Honda driver Fernando Alonso’s recent fifth-place finish at the 2016 Monaco Grand Prix.

As for styling the updated Fit is a lot more appealing than its predecessor, with sharper edges that include an F1-inspired front wing-like lower fascia and cool black mesh faux vents front and back, while my tester even included some glitzy chrome at each end. I often see Fits new and old fixed up by their owners, meaning it has a certain sporting cachet that most others in the class don’t, which, along with Honda’s good name, helps to keep its resale values higher than average.

On that note the Fit might not be the best seller in its class but it’s the subcompact model I recommend to friends most often. It does everything a small car needs to very well while providing best-in-class electronics and by far the most versatile rear seating/cargo system anywhere this side of a minivan. Expect to be impressed.
©(Copyright Canadian Auto Press)
Car Shopping Tools