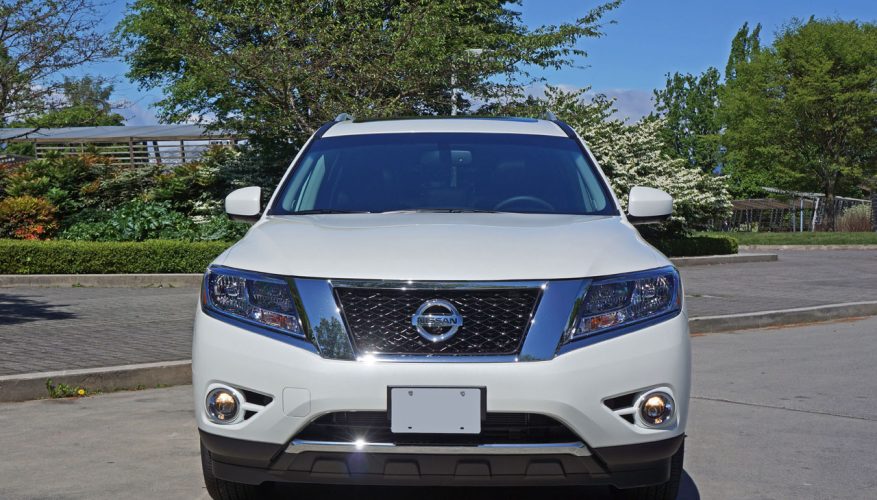 By: Trevor Hofmann
It’s really tough to get noticed in today’s ever burgeoning family vehicle segment, but Nissan has done very well with its lineup of crossover SUVs. Its compact Rogue was a very strong fourth out of 13 competitors last year while sales are up 7.5 percent so far this year, whereas its Murano and the Pathfinder being reviewed here combined for fifth place on the massive 20-model mid-size sales chart, while sales of the two Nissans are up 77.7 and 11.2 percent respectively over the first five months of 2016. What’s more, the Pathfinder was third most popular amongst standard seven-passenger SUVs. From all of this one thing should be clear, Canadians like the Pathfinder a lot.

It makes sense of course. We’re practical people, still enamoured with our minivans, so a vehicle that does most things a minivan can while looking a great deal more SUV-like should fare well. To that end the Pathfinder provides best-in-class passenger volume‎ and the segment’s most accessible third row thanks to EZ Flex seating that tips the lower cushion of each second-row outboard seat upwards as the entire mechanism slides forward, this opening a gap that’s wide enough for average sized adults to easily pass through on their way to a set of rear seats that said adults won’t have any problem using. You’ll need to slide the second-row forward to improve third-row legroom, but this allows adult seating in all seven positions, which makes the Pathfinder a far cry more accommodating than most competitors. Another bonus is the ability to access the rearmost seats without removing a forward facing child seat from the second row, although you’ll want to remove the child.

The big SUV strikes a minivan pose when it comes to cargo capacity too, although I must say it’s easier for hauling large items than most vans that require removal of the second-row seats. Just tumble the 50/50-split third row into the floor to expand the Pathfinder’s 453-litre (16.0 cubic-foot) minimum capacity to a much roomier 1,201 litres (42.4 cubic feet), while the 60/40-split second row flips forward just as easily for a maximum of 2,260 litres (79.8 cubic feet). Sure that’s not as much overall space as any modern van with all seats removed, but it’s a heck of a lot easier to make happen. I chose it for picking up a sizable load of furniture consisting of two wide and three narrow Ikea Pax wardrobes with shelves, the latter trio complete with heavy mirrored doors no less, and it not only swallowed them up without need to push the driver’s seat uncomfortably forward but it also remained extremely stable at highway speeds. Surely there’s little this SUV can’t do, it’s tow rating even measuring a considerable 2,267 kilos (5,000 lbs).

Nissan reconfigured the Pathfinder’s continuously variable transmission last year for a more engaging driving experience and it really feels more like a regular automatic thanks to positive shift increments when getting on the power, although it remains one of the smoothest operators in the segment and one of the more efficient amongst six-cylinder powered offerings. Engine output hasn’t changed since this fourth generation Pathfinder arrived in 2012, still making 260 horsepower and 240 lb-ft of torque, which is more than ample to get it moving quickly from standstill and keep it ahead of traffic on the highway, while passing performance is excellent. Just the same the Pathfinder is more about comfort than speed, which seems to be how most people like their crossover SUVs, the ride as smooth as the powertrain with good compliance over rougher pavement, while the big ute is still quite capable through the corners as long as you don’t ask too much of it, which is par for the course in the large seven-passenger crossover SUV segment.

My Pathfinder tester was priced at $47,398 plus freight and dealer fees due to its top-line Platinum trim, which meant its wheels were 20-inch alloys and rubber 235/55 all-seasons, no doubt helping it navigate corners more effectively. Navigation in mind a useful GPS system was integrated into its single-inch larger centre dash-mounted eight-inch touchscreen along with nav traffic, a helpful 360-degree Around View monitor, great sounding 13-speaker Bose stereo with streaming Bluetooth audio, while additional Platinum upgrades include a powered tilt and telescoping steering column with memory, cooled front seats, and rear DVD entertainment with dual seven-inch displays, two wireless headphones and rear audio/video input jacks.

As far as refinement goes the Pathfinder Platinum mixes straightforward utilitarianism with a decent dose of luxury, although Nissan doesn’t dress up the dash and instrument panel with soft touch synthetics like most of its competitors, preferring instead to relegate pliable plastics to the door uppers, whereas the door inserts and armrests are nicely padded and covered with the same comfortable leather as the seats.

A Pathfinder strength is switchgear that’s mostly premium quality with nice tight spacing, good damping and an overall substantive feel, while the general layout of the centre stack is quite attractive albeit a bit dated due to a button-intensive infotainment interface positioned just below the touchscreen noted earlier, the former featuring a handy rotating dial controller at centre albeit no simple home or menu button to get you back any sort of starting point. For this reason it’s not the simplest to operate, while it doesn’t yet feature Apple CarPlay or Android Auto and its screen resolution isn’t the sharpest in the class. Also a bit behind the times, the audio and HVAC controls are purely analog, only showing adjustments on the touchscreen briefly when being used, while unlike some competitors there are zero touch-sensitive controls.

The three-way heatable and cooled front seats were plenty nice though, as was the woodgrain surrounding the centre stack and lower console, while the driver’s seat was extremely comfortable even after long stints behind the wheel. A powered glass sunroof sits over the front passengers and a larger panoramic glass roof hovers over both rear rows, making the entire cabin feel open and airy.

Another way the Pathfinder shines is in fuel economy as noted previously, the big SUV managing to eke out 11.9 L/100km in the city and 8.6 on the highway in FWD or 12.1 city and 8.9 highway for lower trims equipped with AWD, whereas my fully loaded and therefore heavier Platinum was still good for 12.7 city and 9.0 highway.

According to both Consumer Reports and J.D. Power it’s not the most reliable, however, with a rating of minus-126 from the former and a below average score in the latter third-party analytical firm’s latest Vehicle Dependability Study. On a more positive note the NHTSA gave the Pathfinder five stars overall for crash worthiness whereas it earned best possible “Good” scores from IIHS in all categories, but a lack of active sensing safety technologies such as forward-collision warning or automatic emergency braking means that it didn’t earn Top Safety Pick status.

If you’re in the market for a seven-passenger SUV and you adhere to the belief that the “audience” is rarely wrong then the Pathfinder’s overall popularity should make it a priority test drive. After a week with one at my disposal I certainly can appreciate what all the fuss is about, given its comfortable, roomy and accommodating cabin. It’s one of the easiest mid-size SUVs to live with, which is why we tend buy into this class in the first place, and therefore I can’t help but recommend it.
©(Copyright Canadian Auto Press)
Car Shopping Tools