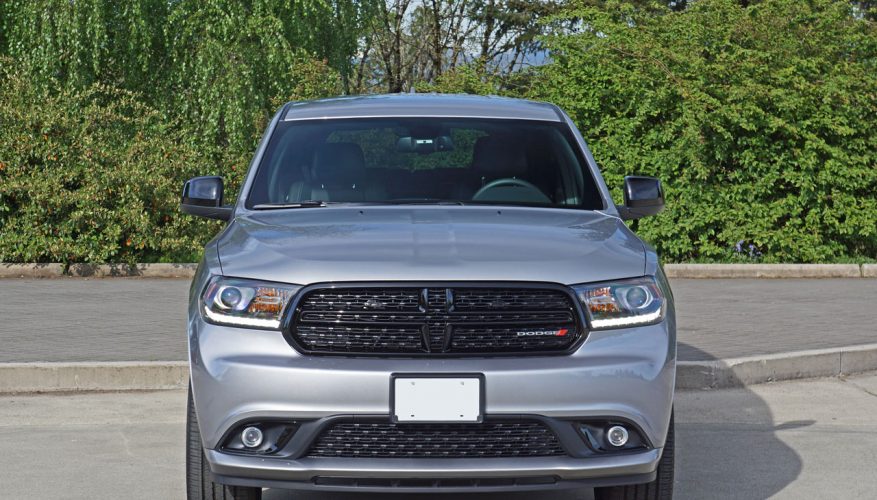 By: Trevor Hofmann
Since the Durango debuted in 1997 it’s been one tough looking contender, the original a compelling design that remains a head-turner after all these years and the current third generation still fresh and stylish despite its half decade of availability. No doubt the mid-cycle update it received three years ago gave it new legs, although it’s taken until now for sales to really take off with the first five months of 2016 nearly matching all of last year’s results, the numbers reading 3,036 units as of May compared to 3,659 for all of calendar year 2015. What’s going on Dodge? Or maybe I should put that question to Canada’s SUV buyers. After all, one glance at this SXT Blacktop and I’m left wondering what’s taken them so long to catch on. This thing is pure testosterone on wheels.

Its grey Billet Metallic paint and surrounding body-colour detailing along with its blacked out grille, headlight and fog lamp bezels, mirror caps, wheels and badging made it as intimidating as a highway patrol ghost car, although the constabulary doesn’t normally spend the money required for 20-inch rims on 265/50 rubber. Still, this Durango’s only a couple of blue and red strobes away from striking fear into the hearts of surrounding motorists.

Believe it or not, this is a base Durango SXT with $195 in paint plus $1,595 for the Blacktop package, which also adds cool LED DRLs up front and dual exhaust at the back while subtracting the roof rails from up top, the latter, together with a complete lack of chrome as well as a rich leather and pseudo psuede lined and digitally infused cabin endowing it with a decidedly upscale urbanite attitude. My tester also included the $1,250 Popular Equipment Group encompassing heatable front seats and steering wheel, a back-up camera and rear parking assist.

All of this comes in a cabin that will make you completely forget any previous Durango interior thanks to soft touch surfacing across the dash top and halfway down the instrument panel, even stretching down to the lower extremities of the centre stack and running across each door upper and insert combination front to back. Stylish satin-silver inlays highlight the dash in door panels while thick padded leatherette armrests boast contrasting grey thread on the doors and centre console, that stitching showing up on the seats as well. The leather-wrapped steering wheel is padded and nicely stitched for extra grip, while the switchgear on its spokes and elsewhere around the cabin is well damped, has a high quality feel and a good tight fit.

A premium-level seven-inch colour TFT primary gauge cluster immediately catches the eye, replete with myriad features and bright, clear legibility no matter the light outside, but this advanced bit of electronic kit makes this entry-level Durango’s most glaring weakness all the more apparent, a centre stack that comes across as more rudimentary than the majority of competitors due to an infotainment touchscreen that measures a mere five inches across. Just the same the aforementioned rearview camera incorporates active guidelines, while the audio system includes Bluetooth streaming and easy phone connectivity, albeit a simple digital compass points the way instead of navigation. Unusual is a digital button that will automatically drop the third-row headrests for better rearward visibility. Of note I’ve tested the Durango with its upgraded 8.4-inch touchscreen and it’s a wholly different experience that I recommend if funds allow, although you’ll need to move up in trims to get it.

Most should find the Durango spacious, this SUV bordering on full-size albeit not quite as big as a Tahoe or Expedition, at least when it comes to width, but second-row passengers get plenty of legroom. That middle position folds out of the way for easy access to a third row that’s nicely finished and amply sized for average sized adults. Alternatively it can be left folded into the floor for more cargo room, the reasonably sized 487-litre (17.2 cubic-foot) hold (about the size of a large sedan’s trunk) expanding to 1,351 litres (47.7 cubic feet) behind the second row. With both rear rows folded the Durango is one of the more accommodating in its class with a massive 2,393 litres (84.5 cubic feet) of stowage space to its credit.

While this Durango SXT doesn’t quite meet premium-level expectations inside, the hefty thunk its doors make when closing, overall quietness at speed, and impressive way it takes to the road will make you wonder why Dodge doesn’t go all the way with luxury refinements. It’s a unibody design, in case you weren’t aware, no longer riding atop a pickup truck frame like it used to and some of its aforementioned full-size colleagues still do, which is why its structural rigidity is so sound, overall feel so substantive and handling so agile, similar to pricier SUV players from upmarket brands.

A fully independent suspension provides a wonderfully compliant ride yet confidence inspiring road holding, while an advanced eight-speed automatic that wows with space-saving rotating-dial gear selection plus fully engaging paddle shifters makes the most of the 3.6-litre Pentastar V6’s 295 horsepower and 260 lb-ft of torque. The numbers aren’t class-leading but takeoff feels more than strong enough while surprisingly the big brute achieves the best fuel economy in its AWD class at 12.8 L/100km city and 9.5 highway, this due in part to auto stop/start that comes into play when the engine would otherwise be idling. That engine runs smoothly too, although it makes a wonderfully gritty growl at full throttle, while the autobox is equally smooth with quick crisp shifts when pushed hard. Available Sport mode is actually quite aggressive, requiring the use of those paddles so as not to rev the engine too high and needlessly waste fuel.

At the end of my test week I only have one complaint that has also affected a number of other FCA vehicles equipped with proximity-sensing access, a regular need to press the door handle-mounted button multiple times to gain entry. I found that shifting my body position sometimes helped, no doubt relative to which pocket held the key, but being that I haven’t needed to do likewise with the passive entry systems used by other automakers it may be something FCA should look into.

This small irritant aside, the Durango is an impressive SUV that still measures up to more recently updated competitors in most respects. The larger infotainment display and rearview camera should be standard, especially considering a base price of $43,395 plus freight and dealer fees, but instead Dodge invested its money into one of the best drivetrains in the industry.

You’ll be hard pressed to find a tougher more masculine looking SUV, which, from a brand that brings us the wicked looking Charger and awesome Challenger, seems fitting. It gets an enthusiastic thumbs’ up from me, although you may want to move up to a higher trim to access better infotainment and more features.
©(Copyright Canadian Auto Press)
Car Shopping Tools