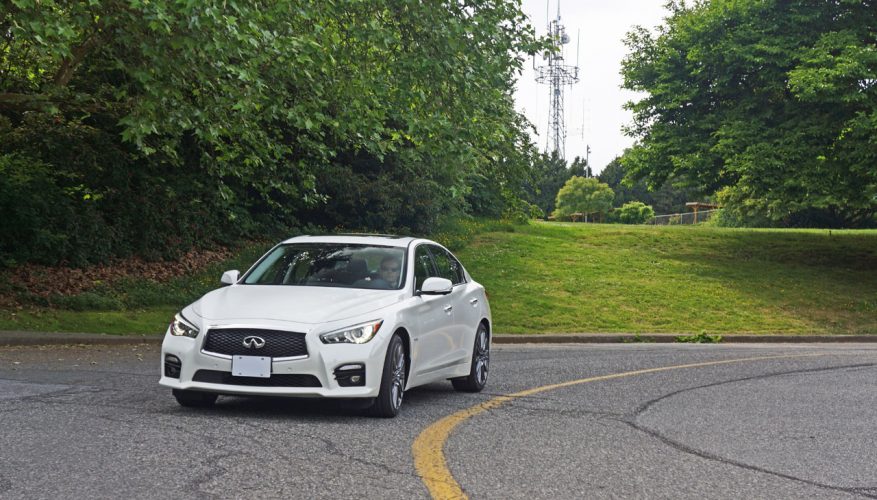 By: Trevor Hofmann
I’ve got good news and bad news. First the bad news: Infiniti has discontinued its multiple award-winning 328 horsepower naturally aspirated 3.7-litre V6 from its Q50 lineup and replaced it with a 208 horsepower 2.0-litre turbocharged four. Ouch!

But wait. Remember there’s good news too. That four packs 258 lb-ft of peak torque from just 1,500 rpm and achieves 10.6 L/100km city and 8.4 highway compared to the old 3.7’s 12.5 and 8.7 rating, while better yet a completely new 3.0-litre twin-turbo V6 strikes back in two states of trim, the first using less fuel than the outgoing model at 12.3 city and 8.5 highway while making a competitive 300 horsepower and 295 lb-ft of torque and the second only increasing highway mileage to 9.1 while dishing out 400 horsepower and 350 lb-ft of torque, which when hooked up to my most recent Q50 tester was enough to get my heart racing faster than anything this side of an M, AMG, RS, F or V branded super sedan, Infiniti not yet playing in the ultra-performance sandbox albeit making a good argument for stepping up with its long anticipated Eau Rouge.

Could this be the son of Eau Rouge? Whether or not that sizzling hot concept gets built is now mostly water under the bridge (Spa-Francorchamps fans need only comment) thanks to this Red Sport 400, a subtler yet still alluring road car that even gets the blood flowing before climbing inside. It starts off with a Q50 that’s already sensational in base trim yet much more menacing with its new frowning front fascia replete with glossy black bezels around its DRLs and LED fogs, gorgeous multi-spoke dark grey alloys at each corner, tasteful body-colour spoiler atop the rear deck lid, and sweet set of stainless pipes poking through the rear valance. It’s hardly a departure from lesser Q50s, but it’s no styling ruse either.

Have you ever experienced 400 horsepower before, let alone all that performance in a D-segment compact? OK, at 1,839 kilos (4,054 lbs) the Q50 Red Sport 400 isn’t exactly the trimmest in its premium class, but its twin-turbo V6 makes light duty of any excess baggage literally and metaphorically; you’ll forget all your cares within 4.8 seconds to 100km/h. That’s bloody quick, by the way, but it wouldn’t go anywhere without Infiniti’s ultra-engaging solid-magnesium paddle-shift actuated seven-speed autobox with navigation synchronized adaptive shift control and downshift rev matching snapping swiftly through the gears, the Drive Mode selector suitably toggled to Sport (there’s an Eco mode too… yah, whatever), all four wheels and 245/40RF19s locked onto tarmac at takeoff, Infiniti’s sport-tweaked Dynamic Digital Suspension with electronically controlled dampers taking care of squat before brilliantly responsive quick-ratio Direct Adaptive Steering joins in to slice through S-curves, active trace control modulating the brakes and engine torque to enhance feel, and DDS minimizing dive when the big four-piston binders on 14.0-inch front and 13.8-inch rear rotors come into play. This just might be the ultimate premium sleeper.

Those aforementioned M, AMG, RS, F and V super sedans might as well honk and give the royal salute to constabulary as they blast past, the powers that control the roads suspicious even if maintaining the posted limit. An Aspen Pearl white Red Sport 400, mind you, flies under the radar, at least if said gun isn’t pointed your way. Other than the rush to the head and need for its body-hugging seat bolsters, Red Sport passengers won’t be overwhelmed with over-the-top go-fast interior styling either, this hyper four-door delivering the same rich opulence as regular Q50s. Sure there are aluminum pedals underfoot, but the inlays aren’t racy carbon-fibre, just the usual beautiful glossy hardwood as in other Q50 models, while Infiniti doesn’t even blacken the fabric-wrapped pillars and roofliner, so en vogue with performance models. The leather upholstery isn’t enhanced with pseudo psuede either, they’re merely perforated hides to allow for a little extra grip and better ventilation. They’re fabulously supportive, however, with powered thigh extenders no less.

It all comes in an interior that’s a cut above most rivals, at least in some respects. Infiniti’s switchgear has always been second to none and the Q50 doesn’t disappoint, while soft touch synthetics even go so far to cover the glove box, albeit not the lower doors like some others in this class. Other than a sunglasses holder that doesn’t properly hold sunglasses, I suppose my only disappointment would be the somewhat shapeless steering wheel that wasn’t sporty enough for such a blisteringly quick car, especially strange when considering Infiniti’s mainstream volume brand, Nissan, fastens a thick flat-bottomed wheel with thumb spats to its Maxima SR that would look right at home in a 370Z Nismo.

Like the steering wheel, the rest of the Q50 Red Sport 400’s cabin gets filled with features found in lesser trims including its bright and clear purple-tinted electroluminescent primary gauges, large and useful colour multi-information display at centre, much larger dual display infotainment setup on the centre stack, the eight-inch top monitor for the 360-degree camera, navigation system’s map display and other functions controllable via a rotating knob on the lower console, and bottom seven-inch touchscreen for adding nav info, adjusting the radio and HVAC settings, setting up your phone, and more. The display quality is high in resolution, graphics good, colour rich and contrast deep, while it performed functions quickly and well.

As with all Q50s, roominess is good front to back, the rear seats in this Red Sport particularly nice thanks to excellent lower back support, while trunk space is about average for the class at 382 litres (13.5 cubic feet), the rear seatbacks fitted with a centre pass-through or alternatively folding 60/40 if longer items need loading. It’s good to know your super sport sedan is still practical, right?

Truly, the new Q50 Red Sport 400 loses nothing on the way from mere luxury to peak performance, but it’s an ultra-quick four-door designed for a more mature adrenaline junkie, the type of well-established luxury buyer that doesn’t want to attract too much attention when testing the limit of (hu)man and machine. That it starts at only $54,600 plus freight and dealer fees, which is about $20k less than any of those previously noted competitors you might want to compare it to, is most impressive.