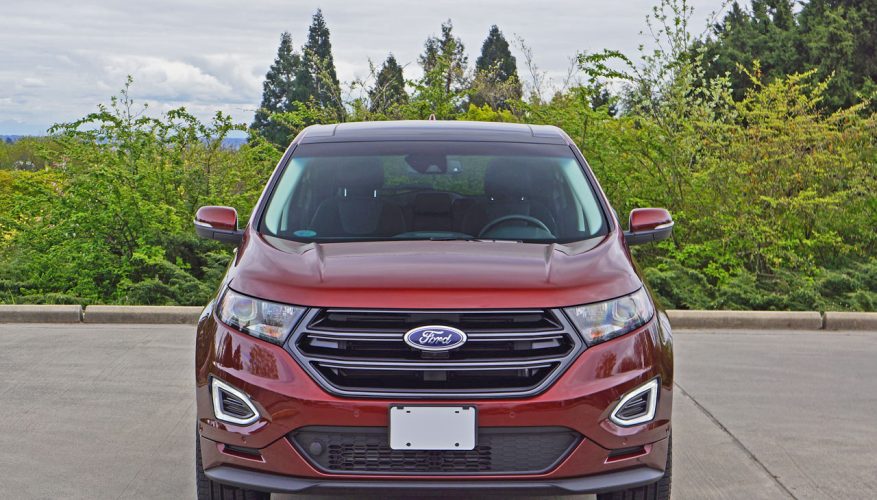 By: Trevor Hofmann
Here are some stats you probably don’t know. Ford brand sales are so far ahead of the competition in Canada that even if each and every Smart, Scion, Mini, Mitsubishi and Chrysler sold last year were added to second-place Toyota’s lofty 2015 calendar year tally the pseudo-conglomerate wouldn’t measure up. Likewise, if you combined Toyota’s total sales with Subaru, Kia, Volkswagen, Mazda, Jeep, GMC, or even all of Dodge brand sales Ford would still come out on top.

How does Ford do it? Their F-Series is consistently Canada’s bestselling pickup truck and their lineup of crossover sport utilities is most popular too. The Escape dominates our compact category whereas the Edge and Explorer are both strong sellers in the five- and seven-passenger SUV segments respectively, while the wonderfully oddball Flex is actually the niche model that pushes Ford past its closest competitor for top spot amongst midsize SUVs.

So far this year I’ve reviewed that unorthodox Flex and the more mainstream Explorer, both continuing to impress, so it was only a matter of time before settling into the recently updated Edge. Oddly, however, the Edge was introduced in 2014 as a 2015 model yet the powers that be in Oakville chose not to add one to my local press fleet until now, well into the 2016 model year. I was beginning to wonder if there was something wrong with it, but I couldn’t have been more wrong.

I’ve been positive on this model since it debuted way back in 2006, having driven the original ’07 on its San Francisco launch and also tested an ’09 Sport, an ’11 Sport and a ’13 Sport. If you look at my track record you’d think Sport was the only model made, but the Ontario-built SUV is also available in SE, SEL and Titanium trims. I just got lucky each time my loaner came around and the top-line Sport found its way into my garage. Ditto for this 2016 model, an SUV that reminded me why Lincoln sales suffer.

Don’t get me wrong as the latest MKX is an excellent alternative to more popular premium badges, but let’s face it, buyers aren’t exactly flocking from Lexus, Mercedes and BMW dealerships to the Lincoln side of blue-oval showrooms in order to get their mitts on the new MKX. The majority of Lincoln sales come from those stepping up from their trusty Ford, and the Edge is simply too good for most to give up, especially this new second-generation model.

As far as styling goes it’s a six of one, half a dozen of the other situation. I personally like them both, with the Lincoln’s elegant winged grille and headlight assembly certainly more unique and Ford’s broad, chromed, or in this case blackened hexagon more masculine. The rest of the Edge Sport’s detailing hardly hurt styling matters either, from its deeply sculpted hood to its heavily vented, LED’d and aero-aided lower front fascia, past its optional dark-grey painted split Y-spoked 21-inch rims shod in gripping 265/40 Pirelli Scorpion rubber, on to side bodywork that ripples with muscular creases, folds and yet more go-fast aero bits, right to the very back where a large rooftop spoiler hangs over a cool set of mostly white-lensed LED tail lamps complete with a subtle new centre extension that bridges the gap under the rear glass, and last but hardly least a matte-black diffuser-style bumper cap at bottom that’s filled with eye-catching rectangular chromed exhaust tips. It’s 100 percent badass!

Until you get inside. First off, I wouldn’t recommend bringing your friends along for a ride. They’ll be sure you’re just as rough and rugged as you’ve always been when you drive by, but once in the passenger’s seat they’ll know you’ve gone soft. The new Edge is downright luxe. Almost the entire dash top is finished in a rubberized soft-touch synthetic that continues down the sides of the centre stack and then all the way along the top ridges of the lower console. You don’t even find that level of luxury in the majority of premium-branded mid-size SUVs, while the uppers are finished in the same pliable synthetic and the door inserts get an even nicer padded leather complete with diagonal contrast stitching. The armrests are detailed out identically, albeit the latter French-stitched. Satin-silver and chrome accents brighten up key areas around the cabin while a carbon-like inlay dresses up the instrument panel ahead of the front passenger.

The steering wheel rim is appropriately leather-clad, although it feels a bit thin for a sport model, yet all of the switchgear on its spokes is first-rate quality with a nice tight fit and high-end damping. Ditto for the rest of the buttons, knobs and toggles throughout the interior, the assortment on my tester’s centre stack even including optional three-way front seat coolers to go along with its standard three-way heaters.

The Edge’s electronic interfaces are as good as this segment gets, with the brand’s trademark dual multi-information displays flanking an analog speedometer, and what is now arguably the best-in-class infotainment system atop the centre stack. The Edge Sport incorporates Ford’s new Sync 3 system that hooks your smartphone up with either Apple CarPlay or Android Auto, and is now as easy to use as such systems get. Its powder blue/white colouring scheme and ultra-minimal graphics make it one of the more attractive too, while some tablet-like upgrades include pinch and swipe capability, voice recognition that actually works more often than not, and easier setup processes. The usual infotainment functions are improved upon by a high-resolution rearview camera featuring active guidelines, superb phone and audio connectivity via wireless streaming, and loads of available apps, my tester’s equipped with optional navigation, plus more.

The Sport’s standard Sony audio system is also excellent, made even more enjoyable thanks to one of my favourite dance tracks from popular ’80s artist George Michael. A bit ironic in this particular vehicle, the song Freedom depicts a breakup on the album Listen Without Prejudice Volume 1 which became part of a breakup of its own, or rather a legal dispute named (Georgios) Panayiotou and others v Sony. I’m not sure how George would feel about being reunited with Sony here in this Edge, but both sounded fabulous.

Also wonderful, the aforementioned cooling seats helped alleviate a 27-degree mid-April heat wave. I’m sure the heaters would work just as well in this Edge as they have in previous Fords tested, as would the optional heatable steering wheel, although there was no need for either that week.

Those seats are superb, incidentally, with good inherent design and 10-way adjustability for personal fine-tuning. Their perforated psuede inserts and solid leather bolsters looked rich too, once again as stylish as anything from the premium segment. The rear seats get the same design and were quite comfortable with good lower back support. The Edge is spacious front to back, the latter boasting excellent legroom and a fairly full seat squab that should benefit taller passengers, plus there’s ample headroom and shoulder room, whereas my tester even including two-way heatable cushions in the outboard positions. The folding centre armrest features the usual dual cupholders, while the doors are finished in a similar high-end treatment to those up front. All-round, the Edge Sport’s rear quarters are comfortable while open and airy feeling, no doubt enhanced by the massive panoramic sunroof overhead.

That rear seat splits 60/40 for reclining comfort or for lowering when extra stowage room is needed, plus in Sport trim each side power-folds via buttons on the cargo wall. You’ll first need to open the cargo door, this done by waving a foot underneath the rear bumper. Once laid flat, the Edge expands its sizable 1,111-litre (39.2 cubic-foot) cargo hold to 2,078 litres (73.4 cubic feet), plus it’s a nicely finished storage area with a carpeted floor and seatbacks.

Back in the driver’s seat, I’m quickly reminded this is my second stint with Ford’s impressive new turbocharged and direct-injected 2.7-litre Ecoboost V6, my first with the MKX, and it feels nearly as powerful in blue-oval tune. This engine really deserves some sort of award (Ford should stuff one into its best-selling Mustang for a bit more attention while simultaneously making its mid-trim Mustangs even more irresistible), as it combines thrill-a-minute performance along with a level of smooth sophistication many of its competitors can’t rival. The engine produces 315 horsepower and 350 lb-ft of torque, which makes it 20 horsepower and 30 lb-ft shy of the same mill used in the MKX, but still enough to put a silly grin on my face at full throttle.

As is normally the case with Ecoboost engines, quick acceleration isn’t the only benefactor with the 2.7-infused Edge achieving a competitive 13.6 L/100km city and 9.8 highway, which is considerably better than Lincoln’s 14.4 city and 10.3 highway rating. Both utilize a refined and proven six-speed SelectShift automatic transmission, not the most advanced for the premium class but par for the course in the Edge’s mainstream volume-branded market sector. Paddle shifters make the most of its capability, while standard AWD keeps all four wheels engaged with the ground below.

The 2.7 puts out a purposeful guttural sound at takeoff, the exhaust making a waffling noise that sounds much deeper and more resonant than expected for its smallish size, and then its pull from standstill feels downright V8-like, the turbo creating a uniquely fun slingshot effect with resultant zero to 100 km/h times reportedly down to a mere 6.2 seconds. This is where its agile fully independent suspension comes into play, keeping the Edge fully planted at high speeds no matter if headed down the straight and narrow or transgressing a ribboning coil of curves and undulations. Really, the way this SUV handles you’d think a blue and white roundel was fixed to the hood and liftgate. I’m willing to bet it would be best-in-class if put up against its real challengers on the track, and expect it would also put up a good fight against premium contenders.

At $44,649 plus freight and dealer fees the well-equipped Edge Sport slots in right about where some of the more affordable luxury-branded SUVs start off, although my particular example was hardly without options. That gorgeous Bronze Fire paint added $450 to the final tally and those stunning 21-inch grey-painted alloys another $950, while a $4,500 upgrade package added HID headlamps with auto high beams, adaptive steering, a powered steering column, an auto-dimming driver’s side mirror, rain-sensing wipers, a 180-degree front camera, enhanced active park assist, a heatable steering wheel, cooled front seats and heatable rear seats, a household-style 110-volt power outlet, blindspot monitoring with cross-traffic alert, lane departure warning and lane keeping assist, plus more, whereas the $2,000 Canadian Touring Package adds both navigation and the panoramic sunroof (a good deal being that the sunroof is $1,850 on its own). Altogether the options totaled $7,900, which pushed the Edge Sport’s price up to $52,549 plus freight, which is about where the first lot of lower-priced premium-branded SUVs start. To put it all into context, Ford offers the same well-made Edge with less power and fewer features for just $31,349, and the majority of luxury SUVs with options similar to my tester reach up into the mid-$60k to $80k region.

That rich lot wouldn’t include the MKX, mind you, the well endowed model I previously tested only $3,751 more expensive than this Edge Sport, so I recommend testing both to make sure you’re getting the SUV that suits your personal style best. Believe me, there are many good reasons for choosing the Lincoln over the Ford and vice versa, but more importantly there are even more reasons to choose either Canadian-made product over competitors. From the Edge Sport’s beefy styling to its stunning interior, its full supply of luxury features to its superb performance, it’s a sales leader in the mid-size class for good reason.
©(Copyright Canadian Auto Press)
Car Shopping Tools