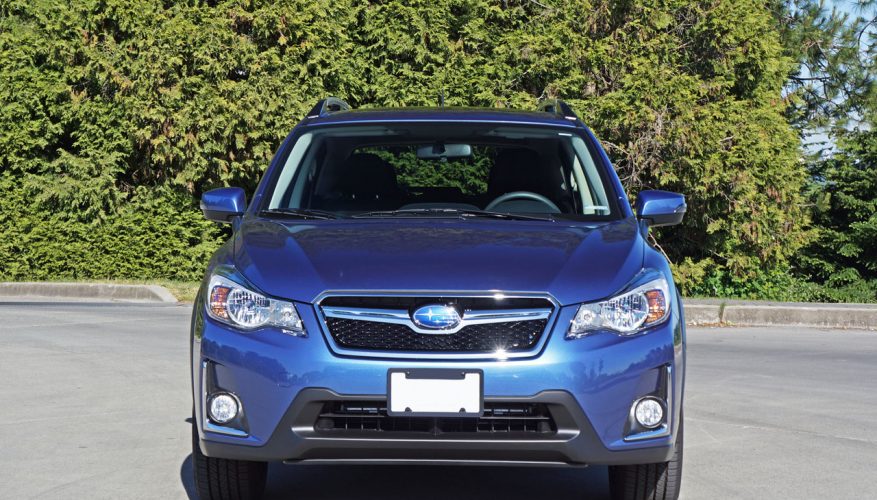 By: Trevor Hofmann
Frankly, after Toyota bought an 8.7-percent stake in Subaru way back in 2005 that’s since expanded to just under 16.5-percent, I expected a hybrid much sooner than this 2016 model year. Now, a decade later, the Japanese brand’s storied boxer is electrically assisted, and while this move might not seem necessary when considering the Crosstrek already achieves good fuel economy for an all-wheel drive crossover and Subaru has long offered some of the cleanest PZEV vehicles available, it at least goes a step further to enhance the brand’s image.

Let’s face it. Unless we’re talking about Toyota’s Prius, that’s found initial and repeat sales numbers no challenger has come anywhere near duplicating, hybrids aren’t exactly burning up the sales charts. They were having enough challenges attracting would-be buyers before last year’s plunging oil prices, but now that a litre of regular unleaded costs less than we’ve seen in years, electrification isn’t quite as popular as it used to be.

What’s more, Subaru’s current mild hybrid system isn’t exactly state of the art. There’s no plug to charge a motive battery capable of getting you back and forth to work with nominal cost to wallet or environment. Heck, it’s not even the usual full-hybrid design capable of running purely on electric power for short distances at low-speed. Rather, it’s a mild hybrid similar to those used for more than a decade by Honda as well as some powering GM’s less intensive hybrids. Basically, the Crosstrek Hybrid’s power unit sandwiches a low-hp electric motor between the engine and continuously variable transmission (CVT) to assist the engine with increased torque when needed, while otherwise wasted energy produced from braking friction as well as overrun power gets recaptured to charge a small lithium-ion battery. Last but not least, the Crosstrek features a consumption- and emissions-reducing auto stop/start system that turns off the engine when it would otherwise be idling, which I must admit was a bit abrupt when restarting. Let’s call it a first step in electrification, one that at the very least puts Subaru on the hybrid map while offering some pretty decent savings at the pump when used for city driving.

Transport Canada estimates 7.9 L/100km in the city for the Crosstrek Hybrid compared to 9.1 for the conventionally powered Crosstrek with its optional CVT, which is a fairly decent advantage that could make owning one worthwhile for those who mostly drive in town. It doesn’t disadvantage on the freeway either, of course, but its claimed 6.9 L/100km highway mileage is only fractionally better than the regular Crosstrek’s 7.0 flat. As for environmental concerns, where the regular Crosstrek meets Partial Zero Emission Vehicle (PZEV) standards the Hybrid goes one step better by achieving Advanced Technology PZEV (AT-PZEV) status, which is certainly a feather in its cap.

As is often the case with electrified models, Subaru ups the Crosstrek Hybrid’s standard content so that some of its hybrid component expense gets absorbed by extras that normally provide profit, this keeping the price more affordable. Knowing that its take-rate will be lower in volume at first, Subaru Canada has also made its Crosstrek Hybrid a one-size-fits-all model, with its exterior detailing appearing more like the conventional model’s Limited trim and the interior more akin the well-equipped Sport model. This means that LED turn signals are integrated into its body-colour side mirror caps and chrome graces the door handles, while its silver roof rails are totally unique to the Hybrid, as is the black rooftop spoiler in back. Lastly, Subaru finished off the Hybrid’s look with a special set of aerodynamically designed lightweight five-spoke 17-inch alloys, while my tester’s classy Quartz Blue Pearl paint is also a Crosstrek Hybrid exclusive.

I should also mention that all of these upgrades get added to a mildly restyled 2016 Crosstrek, featuring a new more assertive grille, updated headlamps, a reshaped front bumper and lower fascia, the latter with chromed L-shaped trim angling around new fog lamps, plus reworked taillight lenses with integrated LEDs, and a new rear fascia, while Subaru also dropped the XV portion of its name so that it’s simply known as Crosstrek (now you know I wasn’t just being lazy earlier).

As noted a moment ago, the Hybrid leans more toward Sport trim than Limited inside, in that its touchscreen infotainment system is 6.2 inches in diameter instead of 7.0 while capacitive touch sensitivity, SMS text messaging, navigation and SiriusXM Traffic aren’t included. Neither is dual-zone automatic climate control, high-gloss black trim or leather upholstery, with the Crosstrek Hybrid alternatively fitted with the Sport model’s two-tone black and grey-weave cloth upholstery with sporty orange accents, plus silver trim in key areas. What’s more, the HVAC system may not be dual-zone but it’s nevertheless automatic and therefore set-it-and-leave-it simple just the way I like it, while the 6.2-inch Starlink-infused touchscreen is still plenty useful with a rearview camera, news, food, weather, music, podcasts, audiobooks, and other multimedia content via its own apps or Aha and Pandora, plus there’s a “Settings” section for personalizing the infotainment system as well as the car’s various functions, and of course an interface for phone setup and use. My phone connected easily and worked flawlessly throughout my test, while the stereo played music and podcasts from my smartphone via Bluetooth audio streaming. It actually has a built-in automated graphic equalizer that lets you quickly switch from bass- and treble-centric settings to a flat sound that’s better for talk radio, or instead you can create customized presets for different music genres. It’s a slick system that sounds superb when optimized for the style of music you’re listening to.

I must admit to not expecting the set of aluminum foot pedals down below, this sharp looking upgrade not available on the conventional Sport model but standard with the Limited, and I was also pleasantly surprised by the Hybrid’s unique primary gauge cluster featuring a brighter blue luminescent sport theme with red needles and white backlighting. While a small monochromatic trip computer sits within those primary gauges, all Crosstreks get a large colour 4.3-inch multi-information display atop the centre dash, although the Hybrid’s MID is upgraded with special fuel saving and hybrid energy flow info to help make the most of its advanced electro-mechanicals.

Fortunately all trims achieve a five-star NHTSA crash test rating as it is, so the solidly built little compact five-door is plenty safe, while other standard Crosstrek features that get grandfathered up to Hybrid trim include auto on/off HID headlights, fog lamps, proximity access with pushbutton ignition (including a particularly nice substantive feeling key fob featuring a big Subaru logo on front and sides that looked as if they were made from billet aluminum), cruise control, tilt and telescopic steering, heatable powered side mirrors, heatable front seats, a powered moonroof and more, plus the usual assortment of safety gear including an extra airbag for the driver’s knees.

Additionally, all of this upscale content comes in one of the nicest premium-level interiors in the mainstream volume-branded business, boasting a soft-touch dash top and instrument panel, the latter wrapping right down to the midway point of the centre stack, plus soft pliable door uppers. A similar padded black weave to the seat upholstery gets added to the door inserts, while padded black leatherette armrests boast more cool orange stitching, that theme showing up elsewhere around the cabin too, such as the centre armrest, leather shifter knob and boot, and of course the leather-wrapped steering wheel.

It’s plenty practical too, with almost as much cargo space as the regular Crosstrek, the Hybrid measuring 609 litres (21.5 cubic feet) behind the rear seats compared to 632 (22.3 cubic feet) for the conventionally powered model, or 1,422 litres (50.2 cubic feet) compared to 1,470 (51.9 cubic feet) when those 60/40 seatbacks are laid flat. We can thank the smaller battery of its mild hybrid drivetrain for all that utility, while the less complicated system also allowed Subaru to keep its coveted symmetrical full-time AWD.

Rumour has it that a quest for better fuel economy may cause Subaru to adopt a similar front internal combustion- and rear electric-powered all-wheel drive system to Toyota’s RAV4 Hybrid for future hybrid models, which will do the job albeit not to the same level of light- to medium-duty off-road duty as the Crosstrek Hybrid. This well proven yet still advanced AWD system joins an impressive 220 mm (8.7 inches) of ground clearance, 75 mm (3.0 inches) more than the regular Subaru Impreza 5-Door the model is based on, to help matters off pavement, and while I can appreciate you may never take yours on a rock-strewn, semi-washed out logging road, across a babbling brook, through a muddy bog or onto a sandy beach (make sure the sand is wet and firm as there’s no low gearing range included with this model), you probably will take advantage of its capability in snow where symmetrical AWD makes easy work of even the deep powdery stuff.

The AWD system aids handling in regular wet and dry conditions too, the Crosstrek Hybrid quite capable through fast-paced corners where it remains relatively flat even during side-to-side transitional shifts. Its ride is smooth and comfortable as well, even over choppy, worn blacktop where its fully independent suspension couldn’t be shaken off-line. I took opportunity to get it up to highway speeds where it performed well too, the 148 horsepower 2.0-litre four-cylinder and 13.4 horsepower electric motor combining impressively during passing maneuvers. The CVT provides effortlessly smooth operation, while Subaru also includes a set of paddle shifters that are actually quite engaging for downshifts, although I found leaving it to its own devices when accelerating worked best.

All in all I enjoyed time spent with the Crosstrek Hybrid, but mostly because I’m a fan of the regular Crosstrek. That’s really the best news about the Hybrid. It feels much the same as the conventionally powered model while giving up little in utility, yet noticeably improves fuel economy in the city. As for pricing, the aforementioned mix of mid-grade and top-line equipment makes its $30,495 plus freight and dealer fees easier to digest, that figure sitting just above the $26,995 Sport and $29,395 Limited. As noted there are no options except paint, the beautiful blue hue noted earlier joined by four standard shades including Crystal Black Silica, Crystal White Pearl, Dark Grey Metallic and Ice Silver Metallic, but oddly no green. Fortunately the Crosstrek Hybrid is green to the core thanks to assembly within a zero-landfill plant, where 100 percent of waste is recycled or turned into electricity.