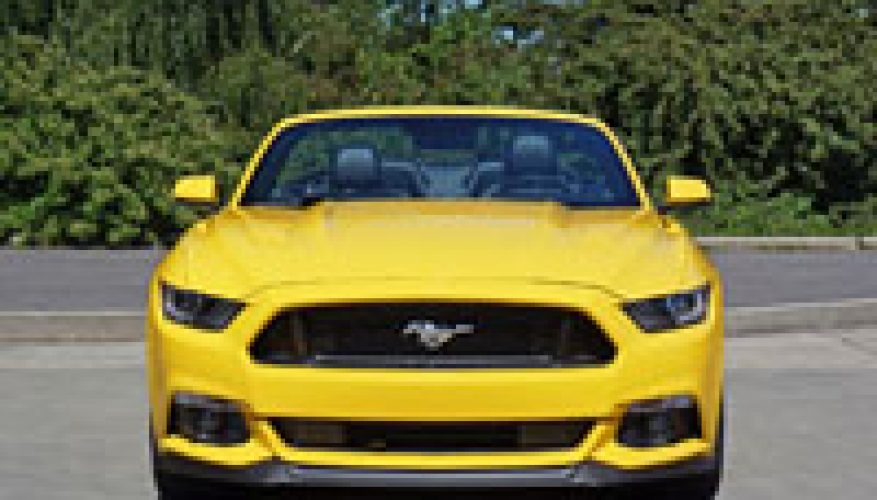 By: Trevor Hofmann
There’s no bad day for a Mustang GT Convertible, although the hot spring weather we’ve recently been enjoying on the west coast is ideal for dropping the top and ripping up the asphalt. The GT’s big 5.0-litre V8 produces noise that piques the ears and turn heads quickly, that is if my tester’s bright yellow paint hadn’t already seared their eyes. This car attracts attention in my city as easily as any mid-engine exotic, not to mention most Porsche 911s and BMWs. No wonder Mustangs sell so well.

Two-door sport models are at the very best niche players within most brands’ product portfolios, but Mustang remains a critical component to overall blue-oval success. Last year Ford’s pony car outsold the subcompact Fiesta hatch and sedan combined, as well as the Taurus and two of the brand’s SUVs, with a total of 6,933 sales in Canada alone, although its U.S. numbers for the 2015 calendar year were staggering at 122,349 signed, sealed and delivered.

Of course, that wasn’t even close to the half-million-plus per year Ford sold in the mid-’60s, but it nudges up against early-’70s and -’80s Mustang numbers and it dumps all over early-’90s sales, while downright crushing the post-Fox-bodied fifth-gen cars once they’d been out for a few years. If anyone’s still wondering how the sharp-edged styling and independent rear suspension of this new sixth-generation model is being accepted by the usual Mustang masses as well as converts, I think it’s safe to say it’s a smashing success.

As for direct competitors, it’s as if the others forgot to submit totals for the second half of last year, with 2015’s Chevy Camaro numbers a paltry 2,668 in Canada and still disappointing 77,502 in the U.S., and that’s after its complete sixth-gen redesign that arrived in May. While new Mustang popularity was surging by an impressive 23-percent here in Canada and an outrageous 48-percent in the U.S., the redesigned Camaro was slip slidin’ away in the other direction. It didn’t lose all that much here with 2015 sales going south by just 7.3 percent compared to 2014, but the bowtie brand’s muscle car nosedived by 10.2 percent in the States where it actually led Mustang sales the year prior. Talk about snatching defeat from the jaws of victory. Making matters worse, FCA Canada’s Dodge Challenger outsold the languishing Camaro by a single model during the same 12 months, although it came up 11,137 units short in the U.S. market despite having its best year ever. They’re hardly crying the blues in Auburn Hills, mind you, or at least they’re not gettin’ down to John Lee Hooker’s It Serves Me Right to Suffer with the same self-loathing shuffle as the Atwater, Renaissance and Beaubien headquartered Motown brand, but then again over in Dearborn its Shake it Baby, Boogie Chillen time.

I’ve long said Ford should upgrade the Mustang’s interior to near-premium levels so it could attract those offended by bargain basement cheapness, and the powers that be responded by producing a GT cabin, at least, that’s up to snuff with the luxe crowd. It’s not exactly 4 Series but most of its switchgear is better than a 911, while it’s finished with more pliable plastic surfaces than previous pony cars, particularly over the two protruding dash top segments and some of the instrument panel, not to mention the tops of each door. The padded door inserts are covered in contrast-stitched perforated leatherette to match the sport seats, albeit the latter are real leather and their perforations aid in breathability as well as three-way forced ventilation. They’re three-way heatable too, but with the sun beaming down it wasn’t like adding warmth was high on my priority list.

Ford added some additional wow factor to my tester with optional engine-turn dark aluminum dash inlays, the centre portion filled with some fabulous looking chrome-rimmed ancillary meters, while yet more chrome circles around the larger dials in the primary cluster and trims the shifter, cupholders and door detailing while accenting much of the switchgear. Satin-silver is even more prevalent from the steering wheel spokes to the shifter knob and centre stack controls in between, the lower portion filled with a fabulous looking row of retro toggles, the right two for selectable-effort steering and selectable drive modes, Sport preferred, these just next to an even more enticing red on white “ENGINE / START-STOP” button.

That button is really what the Mustang GT is all about, or at least it ignites the passion from within both car and driver. The 5.0-litre V8’s loping gurgle makes the GT’s presence immediately known, just like a big Harley roaring to life on a quiet Sunday morning, and while its guttural tone might be more death metal than uptown funk it’s strapped into a car that crosses otherwise impassable genre boundaries as if it were the Chilis covering Stevie Wonder’s Higher Ground (which sounds brilliant on the Shaker system, BTW). Stab the rightmost aluminum pedal and all thoughts of misters Kiedis and Morris will be out of mind, as all 435 horsepower and 400 lb-ft of torque immediately catapult the GT drop-top’s 1,756-kilo (3,863-lb) mass forward, causing fast reactions on the six-speed manual to find second, third, and so fourth.

It shifts ideally, with a nice purposeful heft that’s complemented by a similarly weighty clutch pedal. It’s not as if you’ll need to put in extra time at the gym, as overall operation is easy enough, but there’s a substantive feel to swapping cogs in a Mustang that most imports couldn’t emulate even if they were trying. Just the same its mechanical prowess equals and in some cases surpasses those imports, the Getrag-sourced MT-82 six-speed, that’s been around since 2011, improved for feel and reliability since then, while the sixth-gen Mustang’s move to an independent rear suspension caused Ford to strengthen its 8.8 rear differential to levels of a 9.75, which is why they now call it a “Super 8.8”.

The result is instant joy, a car that locks up its big 19-inch Pirelli P-Zeros and hurls itself forward with a mind-numbing rush of thrust, noise and blurred peripheral visuals, while the new integral link IRS keeps the GT flat during fast corners and minimizes the effects of bumps and potholes, this not only eliminating untimely bunny hops from the car’s rear end but improving overall ride comfort. Additionally, aluminum knuckles and H-arms were fitted at back to lower unsprung mass, while FoMoCo engineers claim twice as much anti-squat capability and nearly 10 times the amount of anti-lift for improved pitch control when getting hard on the throttle or deep into the Brembo-supplied brakes.

I could go on at length about how it drives or jabber on more about the GT’s unique features, its under-hood strut-tower brace a personal favourite, but anything non-performance related will be about as important to its target market as its claimed 15.8 L/100km city, 9.3 highway and 12.8 combined fuel economy. Suffice to say it’s missing nothing most premium-branded sport coupes offer in their top-line trims, except maybe a few electronic nannies to force you back into your lane if you start wandering while tranced out to BPM, although you can opt for blindspot warning with rear cross-traffic alert, or alternatively if you tend to drift off and forget to stop while chilling to Moonbootica, Ford offers forward collision warning to bring you back from bliss.

A $2,000 upgrade adds blindspot warning, seat and mirror memory plus the Shaker stereo, while the $3,700 GT Performance package is responsible for those stunning gloss-black mesh rims plus the 255/40R19 front and 275/40R19 rear summer-performance rubber, as well as the Brembos, strut-tower brace, engine-turned aluminum appliques, oil pressure and vacuum gauges, not to mention a number of items that go unseen such as a larger radiator, a 3.73 TORSEN limited-slip rear axle, some special suspension tuning including heavy-duty front springs, upsized front and rear sway bars and K-braces in back, additional tweaks to the power steering and ABS, reworked stability control, and deletion of the rear spoiler, a minimalist fix I happen to like.

As you may have guessed, forward collision warning was also part of my test car’s upgrades, but it’s the rain-sensing wipers and adaptive cruise control that makes this $1,600 package worthwhile for me, while $800 for navigation is only money well spent because the new Sync 3 system works so well. Considerably more could’ve been added, but as it was my loaner’s $8,650 worth of options, which included $550 for Triple Yellow paint, increased the GT Convertible’s base price of $49,448 to $58,098 before tacking on freight, dealer fees and taxes.

A lot for a Mustang? Hardly. Factor in you’ll need to pay about $15k more for a BMW capable of keeping up, and that car doesn’t include many of the features just mentioned and arguably won’t garner as many enthusiastic thumbs up from passersby. The M4 is an excellent car that I happen to really like, but it doesn’t represent 50-plus years of rolling legend. Still, if you’ve got your mind dead set on spending upwards of $80k there’s always the new 529-horsepower Shelby GT350R. Now that’s some forward thrust I’d like to experience, although the 2.3-litre Ecoboost Fastback I drove earlier this year was an altogether different kind of performance revelation. Ford has all of its Mustang bases covered, which means there’s a pony car ideally suited to your personal priorities and budget.

Is this the best Mustang ever? Yes, but more so it’s probably the best pony car ever. I know I’m likely to get hate mail from Camaro and Challenger fans, not to mention those who revere classic metal more than anything from today’s more sterile world, but I’ve driven countless classics including early Mustangs, this list even including an awe-struck stint behind the wheel of a pristine ’68 Shelby GT500KR, and believe me, this latest Mustang is in a league of its own.
©(Copyright Canadian Auto Press)
Car Shopping Tools