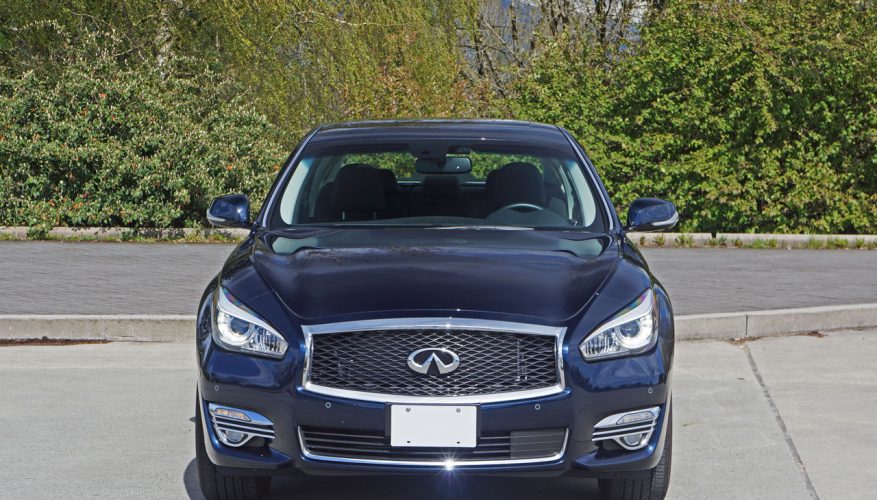 By: Trevor Hofmann
Selling cars has become a tough business, with some manufacturers paring back their compact and mid-size four-door offerings in order to provide yet more crossover SUVs to a seemingly unquenchable utility market, but there’s no such confusion at Infiniti. Certainly it does very well in the premium SUV sector, its QX60 accounting for more than a third of the brand’s Canadian business so far this year, but it’s Q50 sedan is second most popular in Canada and Infiniti’s number one seller south of the border, so it’s not about to abandon the car market.

In fact, an all-new Q60 sports coupe will soon be upon us, while a convertible version of the same model will no doubt show up at a major auto show this fall. The Q70 is not only bigger than the Q50 and Q60, but Infiniti’s largest car and therefore its flagship sedan, although to be clear it doesn’t compete directly with full-size models from its main competitors. Like a number of other premium brands, Infiniti no longer offers an S-Class, 7 Series, A8 fighter, and while many enthusiasts would love to see the brand return with a modern-day Q-ship (the full-size Q45 was the Japanese luxury brand’s first vehicle and the originator of its recently changed “Q” model naming strategy), the E-Class, 5 Series, A6 competitive Q70 will have to do.

In order to offer full-size F-segment customers something with an Infiniti badge, the Q70 was lengthened last year, resulting in the V8-powered Q70L 5.6 AWD. That model continues for 2016 along with this new V6-powered Q70L 3.7 AWD, a trim that will likely be more popular due to a lower initial price point and reduced running costs. As it is the Q70L 3.7 AWD starts at $64,300 plus freight and dealer fees, whereas the Q70L 5.6 AWD adds $4,500 more for a suggested price of $68,800. Either model represents a significant upgrade over the $57,300 base Q70 3.7 AWD, in price and features.

It starts with that 150-mm (5.9-inch) wheelbase extension, adding considerably more rear legroom for a much more luxurious experience in back. The Q70L is actually longer overall than some of the aforementioned F-segment Germans, but due to E-segment underpinnings it’s narrower and therefore doesn’t offer quite as much interior volume. Still, for the majority of luxury buyers seeking extra rear legroom rather than XXL mass, the Q70L’s more easily maneuverable XL size could be the perfect fit.

Also standard, the Q70L’s 3.7-litre V6 puts out a stout 330 horsepower and 270 lb-ft of torque, which isn’t as energetic off the line or during passing maneuvers as the 5.6-litre V8 tested last year, that engine capable of 416 horsepower and 414 lb-ft of torque, but even the six-cylinder’s output was more than I could legally use anywhere I drove it, and certainly powerful enough to put a smile on my face anytime I planted right foot to floor.

At least as enjoyable is Infiniti’s superb seven-speed automatic transmission that comes complete with adaptive shift control that actually learns your personal driving styles and adapts accordingly, whereas its gearshift applied manual mode allows for downshift rev-matching to make you look and sound like Kevin Magnussen rowing through the gears of his Renault Racing F1 car (Infiniti sponsors the Renault entry, the French automaker having been in a strategic partnership with Infiniti-parent Nissan since 1999).

An advanced Attesa ET-S all-wheel drive system is also standard Q70L kit, not to mention a Drive Mode Selector that lets you choose between Standard, Sport, Snow or Eco modes and then controls throttle response plus shift points to make the most of available traction, while substantive 245/40R20 Bridgestone Potenzas offer a good compromise between dry weather performance and year-round grip.

Truly, the Q70L is a deft handler for such a long, comfortable luxury-focused vehicle. While ultimately comfortable and smooth on all but the worst road surfaces I encountered, it was brilliantly sporty when called upon. Of course the regular-wheelbase Q70 feels a bit more tossable through the corners, but this long-wheelbase version remains plenty planted through tight, twisting two-laners while that added length improves high-speed stability, which is ideal in this car. I don’t know whether to refer to it as a performance-oriented luxury car or a luxuriously appointed sport sedan as it fulfills both priorities wonderfully, but together with its impressive powertrain response and smooth yet quick-shifting autobox it’s one of the more entertaining cars in its class.

Like me you might be a bit disappointed that paddle shifters aren’t included (I kept hunting for them all week), these reserved for regular-length Q70 Sport buyers only, which is a strange choice being that it’s such a sporty car even without the Sport-model’s performance upgrades, plus paddles are expected at the Q70L’s mid-‘$60k to $70-something price range, not to mention Infiniti could use a few extras to lure in would-be buyers, but such is the case. I adapted and the Q70L 3.7 AWD was plenty rewarding just the same.

I particularly like the way the Drive Mode Selector sits within easy reach of the right hand while resting my elbow on the armrest, this allowing me to quickly switch between Standard and Sport modes, or over to the left for Eco (Snow wasn’t needed). On this last point I must say that I’m still not a fan of the Q70’s Eco setting, which is unusual because I normally leave any given vehicle in its thriftiest, most environmentally friendly-mode most of the time. This one is so intrusive, however, adding disconcerting backpressure to the throttle when pressed down “too far” for its liking, while dulling all of its senses so much that it’s no longer even remotely enjoyable, so I only turned it on in order to find out if any improvements were made. My thoughts: it’s time Infiniti rethought its Eco-system and while they’re at it, add fuel-saving features that are already mostly well received such as engine auto start-stop to reduce consumption and emissions at idle and possibly regenerative braking. Infiniti already incorporates these systems into its Q70 Hybrid (not offered in our market) so it wouldn’t be like reinventing the wheel to introduce them to the conventionally powered model, as most competitors in the mid-size luxury class are doing. As it is the Q70L 3.7 AWD’s claimed fuel economy is 13.2 L/100km city and 10.2 highway, which is certainly an improvement when compared to the 14.9 L/100km city rating of the Q70L 5.6 AWD, albeit their highway mileage is identical.

On a usability note, the Drive Mode Selector itself appears to be a simple rotating dial, but I kept switching to Eco mode when I was going for Sport because of the way it’s designed. I’m sure I’d get used to it over time, but with just one week to adapt I never got past the tendency to turn it the wrong way. The problem? The lettering for “SNOW”, “ECO”, “.” and “SPORT” (the dot referring to default Standard mode) is etched onto the outer dial that rotates around a marked centre point, so if you quickly turn it to the right, where the hand/eye/mind initially wants to, for Sport mode, you’ll actually get the opposite result. This was initially annoying, but by the end of my weeklong test it was laughably disturbing (my ability to adapt is obviously not quick).

Now that I’m on a rant I should mention a couple of other issues that might turn off first-time Infiniti buyers (never a good thing as salespeople probably have about five minutes max to either impress or lose a potential customer on the test drive). If it’s a winter drive you may want to warm up the heatable steering wheel, although the switch is located out of sight down by your left knee where you could just as easily turn off the stability control (not a good idea in cold conditions), disengage some of the active safety features (ditto), power up the rear sunshade, or open the trunk (which would be a ruddy pain in the arse as you’d have to get out and walk around back to close it). Somewhere on the steering wheel seems more convenient, doesn’t it Infiniti? Additionally, I wasn’t able to listen to my usual financial/investment podcasts via Bluetooth streaming audio (they’re on my smartphone), which is the first time this has happened with a streaming audio-equipped model. No doubt there’s some internal setting that needed adjustment, but I couldn’t find it. Lastly, and this is the case with every Infiniti or Nissan vehicle equipped with a sunglasses holder, my Ray-Bans (nor any other sunglasses I own) wouldn’t fit. It seems the brainiac that designed the one-size-fits-all sunglasses holder made a “bridge” extension that’s way too big and therefore glasses need to be slotted backwards and upside down. Please Infiniti, I normally comment positively whenever sunglasses storage is included, so check out how most other manufacturers do it and make the necessary changes.

I suppose the only other criticism would be slightly dated electronic interfaces, the electroluminescent primary gauges gorgeous in their deep purple backlit radiance, although not comprised of driver-configurable TFT displays as is the norm in today’s luxury market, whereas the multi-information display at centre is even more of a monochromatic letdown. The large eight-inch infotainment display noted earlier isn’t the highest in resolution or richest in contrast either, while it has yet to be updated with Apple CarPlay or Android Auto. Infiniti was first with a 360-degree parking camera, but even this superb feature gets marred by poor image quality, especially when compared to the crystal clear systems on offer from most rivals. Of note, the Q50 does a much better job of infotainment all-round, so expect Q70 models to improve when updates arrive.

Where the Q70L excels most is in interior design and execution, its look certainly more traditional than some others in the class, with stunning glossy woods, chrome and brushed metal accents and sumptuous leathers, not to mention one of the classiest analog clocks in the auto biz, with the overall effect opulent to say the least. For starters, the big Infiniti includes more soft-touch surfaces than the majority of its E-segment peers, including the entire dash top (the primary meter hood even padded with a French-stitched pleather) and instrument panel facing, the high-quality pliable synthetic reaching all the way down both sides of the centre stack and even along the lower console, not to mention across the glove box lid and underneath the dash where the front passenger’s knees reside, although strangely not under the driver’s knees (this would be unusually good for the class, but why not when they’ve gone so far already).

The front seats are wonderfully comfortable and commendably supportive with large side bolsters, while the rear seating area delivers first class legroom, wonderful comfort from the outboard positions, with superb lower back support, plus includes a nice flip-down leather covered armrest with dual integrated cupholders. Those aforementioned rear seat heaters are nice too, and ideal for warming up after a day on the slopes with skis sticking through the pass-through at centre. A nice set of overhead reading lights makes relaxing in back even more enjoyable, although the Q70L isn’t about to make a Mercedes-Maybach S-Class or Executive Lounge Tier 2 equipped 750Li owner forget their ride. Rather the Q70L was designed to be driven, not necessarily driven in, while providing ample rear seating room for family and friends. To that end it does its job well, and for quite a bit less hard earned cash than any long-wheelbase luxury competitor. It could use some improvements, but overall is an excellent luxury car, er, sport sedan… you get the gist. It’s good, and well worth the asking price.
©(Copyright Canadian Auto Press)
Car Shopping Tools