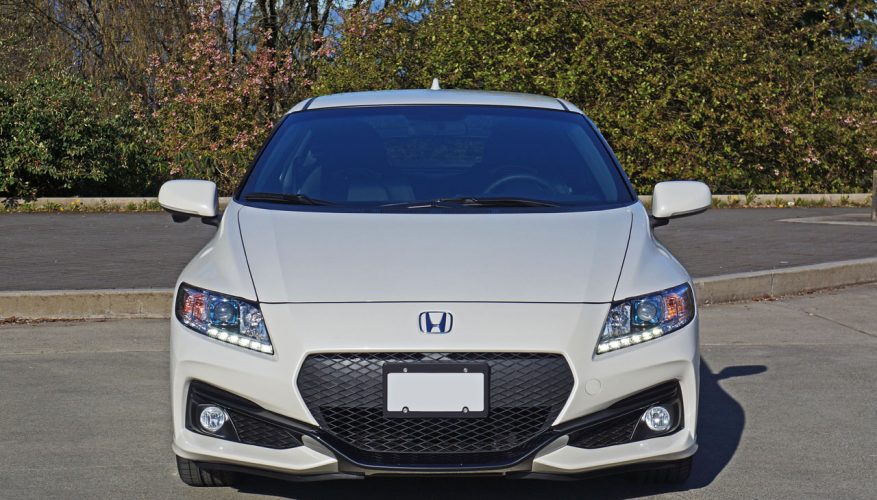 By: Trevor Hofmann
Fuel prices have come down so much over the past year that it’s hardly time to consider a hybrid, right? This may be true for some parts of Canada, but where I live pump prices aren’t much lower than before last year’s oil crash. We were hovering between $1.25 and $1.30 per litre ahead of January 2015 and today’s average was $1.18, so maybe now’s not the time to buck up for a big SUV or performance-oriented sports coupe. Then again, if your new ride combines great fuel economy with loads of fun, why not?

That’s always been the premise behind Honda’s CR-Z, but to be honest I never found it offered enough on the fun meter to be taken seriously by enthusiasts. That was before testing this revised 2016 version, mind you, a car that gets some sweet styling enhancements and mild suspension upgrades to go along with the shot of adrenaline you probably didn’t realize it received three years ago.

The visual changes are subtle but effective, including a completely reworked lower front fascia with a black lacquered centre lip spoiler that curves up in a V-shape as it tapers off at each corner, just above similar circular fogs to the outgoing model albeit set within totally unique surrounding faux vents. New front fender bodywork wraps down below the fogs, its edgy design setting an angular theme that continues rearward into carryover extended rocker panels and a new rear bumper cap that’s sharply shaped like the front end with a blackened centre diffuser. More glossy paint hides the front roof pillars and centre portion of the rear deck lid, making both look as if the tinted glass wraps all the way around. A stylish set of machine finished 17-inch alloys with black painted pockets round out the upgrades, while the CR-Z’s black mesh grille, LED-enhanced headlamps and red/clear lensed taillights were part of the model’s extensive 2013 model year update and therefore still look plenty fresh. All of these black trim bits contrast nicely against my tester’s Ivory Pearl paint, which is a good thing being that the CR-Z is once again only available in this single exterior colour; black, blue, red and yellow were discontinued after the 2014 model year.

Just one colour might seem extreme, but it makes sense once you realize the CR-Z is not only the slowest selling model in Honda’s expansive product portfolio, but also the fourth slowest selling model in Canada overall last year. The 2015 calendar year was especially unkind to the CR-Z, with sales down 45 percent to just 55 units compared to 100 the year prior, and 517 during its first full year of sales in 2011. The reasons for its steep decline were mentioned in the opening paragraph. The car looks like a reincarnated CRX, but performance didn’t meet expectations and making matters worse, fuel economy wasn’t good enough to woo original Insight hybrid buyers that might’ve anted up to fill the void created by uninterested performance fans.

Don’t get me wrong, at 7.9 L/100km city, 6.5 highway and 7.3 combined with the as-tested six-speed manual or 7.0 city, 6.4 highway and 6.8 combined with the CVT it’s plenty efficient when compared to just about anything remotely fun to drive, that is until you compare it to the larger five-seat 2016 Civic Coupe LX that’s plenty sporty with 28 more horsepower yet doesn’t require complex hybrid technology to achieve fairly similar fuel economy at 8.9 L/100km city, 6.1 highway and 7.7 combined with its manual and 7.8 city, 5.8 highway 6.9 combined with its CVT. Better yet, the Civic Coupe EX-T and Touring models are even more powerful while achieving even better mileage at 7.5 city, 5.6 highway and 6.7 combined, albeit only with a CVT.

To leave the argument here wouldn’t do the CR-Z justice, however, as this new version deserves a lot more attention than it’s been getting. First off, it’s a comparatively light two-seater weighing in at 1,232 kilos (2,716 lbs) as tested compared to 1,317 kg (2,903 lbs) for the similarly equipped Civic Coupe Touring, while when the CR-Z’s 1.5-litre four-cylinder with Integrated Motor Assist (IMA) consisting of a DC brushless electric motor and 15-kW lithium-ion motive battery gets mated to its standard six-speed gearbox it actually makes 2 lb-ft more torque than the base Civic Coupe at 140 (it puts out 127 lb-ft with the CVT), and it comes on very quickly thanks to near immediate electric twist, maximum output available from 1,000 to 3,000 rpm. Also notable, that 2013 model year update mentioned earlier increased output from 122 net horsepower and 128 lb-ft of max torque (122 with the CVT), so initial reports of lackluster performance were addressed a few years ago. Granted, this day and age even its more recent 130 horsepower rating doesn’t sound like a lot, but it feels much more alive than its specs suggest, sounds fabulous with a nice raspy note as the revs climb, and the manual shifter is a dream.

Unfortunately I can count the number of manual shifters I’ve tested within the last year on one hand, or maybe two. Either way there haven’t been a lot, and being especially fond of most DIY gearboxes I pay homage to brands that still feel strongly enough about driving dynamics to include a real stick shift and associated clutch pedal in their sportier offerings, and Honda, bless its “soul”, includes a manual in six out of six of its car models (soon to be seven with the upcoming Civic Hatchback) and even one of its SUVs. Honda is a serious motorsport contender after all, even building engines for legendary Formula 1 team McLaren (which is improving in the standings this year) and involved in other motorsport series, not to mention seemingly countless powersport series including Superbike, Motocross, Enduro and even MotoGP, in which it was champion from 2011-2014, so it’s imperative its sporting image remains intact even while it pursues greener pastures. Honda’s road cars are often cited by industry professionals for having the best manual transmissions anywhere, and I have to agree, the six-speed in this CR-Z not quite as sublime as a Civic Si’s shifter but still superb, besting anything from Germany.

The CR-Z’s handling, however, won’t leave a 911 haplessly pitching stones in the gravel trap, as it’s a tad soft through transitional maneuvers, rolling a bit too much for my liking despite the mild suspension upgrades mentioned earlier. These include a front stabilizer bar that’s grown from 19 to 20 millimeters in diameter and rear track that’s increased by 10 mm (0.4 inches), while both front and rear brake rotors have been enlarged to 282 mm (11.1 inches) from 262 mm (10.3 inches) up front and 259 mm (10.2 inches) at the rear. The more softly sprung setup could likely be remedied if Honda chose not to build a one-size-fits-all model and instead offered a sport suspension upgrade, our market’s single trim doing a wonderful job of ironing out pavement imperfections and therefore providing an enjoyable everyday ride for two, but not the canyon carver its styling teases at. Still, leaning chassis and all, I enjoyed every minute behind the wheel. The 205/45R17 Michelin Pilot Sport 3 summer performance tires were plenty sticky and therefore the CR-Z held its line through some of my favourite circuitous two-laners despite feeling slightly sloppy doing so, while that wonderful powertrain rewarded with 100-percent enthusiasm mile after enjoyable mile.

I had so much fun with the CR-Z I probably wouldn’t have minded if its interior were cheap and tacky, but nothing remotely nasty plagued this well built little two-seater. Really, it’s premium all the way, with pliable synthetics across the main portion of the instrument panel and door uppers, nice perforated padded leatherette for the door inserts, and even softer stitched leatherette over the armrests, side and centre. The steering wheel gets the stitched leather treatment too, but it could’ve been a lot sportier as it was missing indented thumb spats in the usual 9 and 3 o’clock positions. Its spokes get filled with the necessary audio and cruise buttons, mind you, plus phone, voice activation and an S+ controller for actuating an instant boost-like Sport mode most noticeable when not already in Sport mode. Incidentally, full Sport mode adds a red sheen to the primary gauge, the big tachometer at centre stage, which is normally left bright electric blue just like the various digital readouts on the rest of the main cluster, either mode displaying a celebratory array of backlit colour.

Over on the abbreviated centre stack is one of the smallest automatic HVAC panels I’ve ever seen, its single-zone setup merely one rotating temperature dial with an “AUTO” button at centre, A/C, mode, fan speed and power buttons surrounding, plus glossy black defog, defrost and recirculation toggles to the right, although the infotainment screen positioned just next door is large and filled with features such as a multi-angle rearview camera with active guidelines, Honda’s fabulous LaneWatch blindspot display that shows a rearward passenger-side view when flicking the right-side turn signal, SMS- and email-to-speech, Siri Eyes Free, Link Connect, navigation, and a great sounding 360-watt AM/FM/CD/MP3/WMA/HD stereo with seven speakers including a sub, speed-sensitive volume and Bluetooth streaming audio, although disappointingly the RDS feature failed to show which songs were playing on the radio. A row of infotainment connectors sits farther down on the lower console, including the usual 12-volt power outlet as well as two USB ports and an HDMI plug, while a carpeted bin provided a place for my phone.

Two-way seat heaters offer toasty warmth in their highest position, while the two seats they warm are upholstered in leather and stitched with sporty light grey contrasting thread. They’re plenty supportive, incidentally, something I probably should’ve commented on in the driving portion of my review, their side bolsters particularly good at keeping backside in place during hard cornering, while a neat set of package bins sit in behind where rear passengers normally reside. You can flip the plastic backing down flat to increase the cargo bay’s size to a surprisingly large and useful 711 litres (25.1 cubic feet), which is more than twice the size of the Civic Coupe’s trunk.

The only serious negative to all this happy talk is a rather poor side-impact crash test from the NHTSA resulting in three stars out of five, although frontal crash tests resulted in a four-star rating and rollover tests were a perfect five out of five. The IIHS offers a more favourable view, with top “Good” marks in all of its four tests including the challenging moderate front overlap, side, roof strength plus head restraints and seats.

A better part of the CR-Z story is its impressively low $26,290 entry price, the optional CVT adding just $1,300 including its steering wheel-mounted paddles. This is a lot of advanced hybrid sports coupe for such a small price, not to mention one that’s endowed with a level of exclusivity to rival a Rolls-Royce Wraith. You might not get the envious leers that the British ultra-luxe model attracts, but the CR-Z still got its fair share of positive attention from passersby.

It’s a standout car filled with high tech, luxury kit and plenty of fun-loving performance that should pull many more buyers than it does, making me wonder what Honda has to do to get more Canadians sitting up and taking notice. Possibly a spec racing series like Nissan’s Micra Cup? A little suspension tuning and a less restrictive exhaust would be all that’s needed to make the CR-Z a track star, while regular involvement at larger motorsport weekends would certainly bring awareness to the sharp looking model and simultaneously show Honda’s hybrid activity in a very positive light. What do you say, Honda?
©(Copyright Canadian Auto Press)
Car Shopping Tools