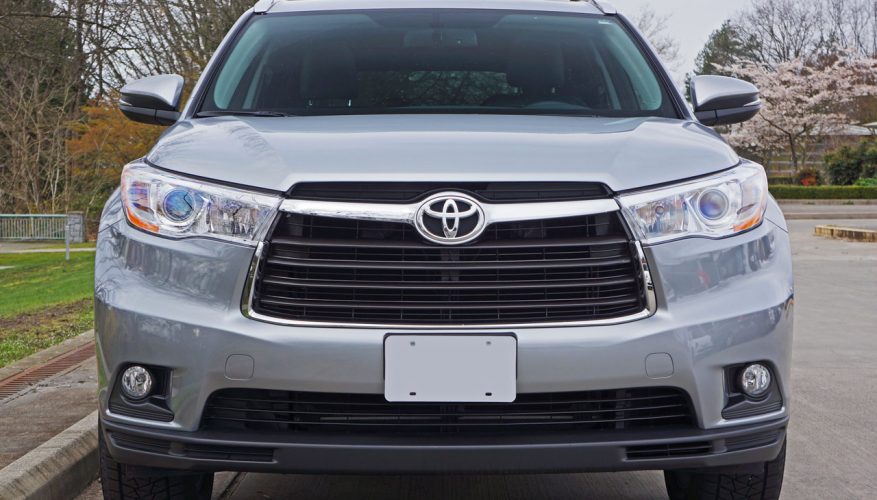 By: Trevor Hofmann
Still my favourite midsize crossover from a styling perspective, the Highlander will soon get upgraded for the 2017 model year with a bolder, deeper and edgier version of the current grille, plus modified headlights, taillights and body panels, and a new direct-and-port-injected 3.5-litre V6 with as yet undisclosed output figures, not to mention a more efficient eight-speed automatic transmission. It’ll be a significant mid-cycle makeover, but probably not so much that you’ll be sorry if you purchase the current version.

Then again, as just noted I happen to really like the current Highlander’s blunt truck-like grille and brawny yet sleek, athletic stance. This XLE trimmed variant gets classic circular fog lamps at each corner, an attractive set of multi-spoke machine-finished 19-inch alloys with grey painted pockets to fill out its profile, and silver painted roof rails with crossbars up top, so if you like what you see you’d better act now.

As for the interior, the Highlander raised the game amongst mid-size crossover SUVs when it debuted two years ago, prompting others to improve or get left behind. Details such as fabric-wrapped A-pillars, a leather-like stitched soft touch dash top, pliable premium door uppers front and rear, a nice padded leatherette tray that flows along the underside of the dash, and superb instrument panel interfaces set it apart, along with Toyota’s usual high quality materials, excellent fit and finish, unique trim colour choices (key areas in my tester were finished in a rich chocolate brown), and generous helping of standard and optional features.

Sit back and take in this XLE and you’ll wonder what need there is for a Limited version above, this model filled with all the more obvious opulent trappings of mobile luxury such as a leather-wrapped multifunction steering wheel, a leather-clad shift knob, leather and SofTex upholstery, an eight-way power-adjustable driver’s seat with powered lumbar and even a variable-length lower cushion for superb comfort and support, plus variable temperature heated front seats, a 4.2-inch colour TFT multi-information display set within bright and clear backlit primary gauges, an auto-dimming rearview mirror, tri-zone auto HVAC with separate rear controls, a large eight-inch infotainment touchscreen with a rearview camera, navigation, advanced voice recognition, text- and email-to-speech technology, Bluetooth phone connectivity with audio streaming, and satellite radio, while up above there’s a universal garage door opener and powered glass sunroof, in back are rear door sunshades, an anti-theft system protects the SUV and valuables within, while pushbutton start with proximity-sensing access gets you inside in the first place. The powered liftgate will open with a touch on its backside too, or alternatively you can lift up the glass hatch to drop something smaller inside, but don’t forget to scroll back the retractable cargo cover first, all of this standard kit with the XLE.

While everything just noted should seem amply upscale for a mid-size volume-branded SUV, a quick scan of Limited features shows there’s reason to move upmarket if living the lavish life is your thing. For instance, the Limited model’s upholstery is perforated leather, the front seats are ventilated, the driver’s with memory and the passenger’s four-way powered, the second row is comprised of heatable captain’s chairs, reducing capacity from eight to seven albeit adding comfort, silver interior inlays are “upgraded” to faux wood, while everything is lit up via ambient lighting, even the steering wheel that’s now heatable and includes HVAC controls, and the audio system is enhanced with 12 JBL speakers, dynamic guidelines get added to the backup camera, front and rear parking sonar make sure the exterior paint remains scratch free, the doorsills come protected with aluminum plates, the sunroof grows to panoramic dimensions, blindspot monitoring with rear cross-traffic alert gets added to the safety kit, and more. While this is all very nice, I think more Highlander buyers will be happy with the level of luxe the XLE delivers along with the $5,190 it saves thanks to a window sticker of just $41,990 plus freight and dealer fees.

The base Highlander LE starts at $33,555 while Active Torque AWD and a few additional features push the price of the LE AWD up to $36,055, the gap between this more basic version and my XLE tester being $5,935. It’s a reasonable price to pay for all of those just noted features yet still remains within most families’ budgets, although one of its best assets is standard across the line.

That would be space, the front row as accommodating as most could hope for, the second row ultra-large with loads of legroom, and the third row comfortable enough for my five-foot-eight medium-built body with about three inches above my head, ample elbowroom and enough of a gap under the second-row seats that my big clunky shoes fit without issue. Those second-row seatbacks tilt forward as the entire structure rolls forward allowing good access to the rearmost seats, while there’s a decent amount of cargo space left in back when all seats are in use. For comparison purposes that number is 391 litres (13.8 cubic feet) as-tested, whereas flipping down the rear headrests and tugging on a strap atop each third-row seat will quickly expand that volume to 1,198 litres (42.3 cubic feet). Flattening the second row isn’t quite as easy, the process first requiring you to lift the lever at the base of the seat that normally gives access to the third row, although before it slides forward you’ll need to tug on another lever at the front of the lower seat cushion at which point it lays flat. It’s a bit awkward but it works, creating a maximum of 2,356 litres (83.2 cubic feet) in XLE trim.

While I’ve already teased you about next year’s drivetrain, rest assured the 2016 Highlander’s standard 3.5-litre V6 is still plenty capable and wonderfully smooth. It’s already a direct-injected engine featuring Toyota’s advanced variable valve timing with intelligence (VVT-i) resulting in an energetic 270 horsepower and 248 lb-ft of torque, while the six-speed automatic is certainly smooth and also a well proven component, so therefore reliability should be a non-issue. The Highlander moves along quickly enough and cruises wonderfully at highway speeds, while its MacPherson front and double-wishbone rear suspension provides a wonderfully compliant ride along with impressive agility through fast-paced corners. Don’t expect it to handle like a premium German SUV, but when push comes to shove it’ll hold its lane unless you provoke the unreasonable, and even then its ABS-enhanced four-wheel discs and electronic stability control should bring it back to safety in short order.

The Highlander earns the highest possible Top Safety Pick Plus rating from the IIHS in the U.S., but not here in Canada where Limited Platinum trim isn’t available and therefore neither is lane departure alert or the pre-collision system with dynamic cruise control, or for that matter automatic high beams that also come with this U.S.-only upgrade, but every 2016 trim in both markets achieve an overall 5-star NHTSA crash test rating, albeit only side crash tests earned 5 stars, with frontal crash and rollover tests earning 4 stars apiece. As for dependability, Toyota came in third out of 17 mainstream volume brands in Consumer Reports’ 2016 report card on reliability, whereas J.D. Power and Associates places Toyota number one within its 2016 Vehicle Dependability Study. The Highlander, mind you, was beaten by the Nissan Murano and Toyota’s Venza and 4Runner siblings in the Midsize SUV category it competes in.

I doubt these third party studies specifically test navigation system reliability, and for the most part Toyota’s have been pretty good each time I’ve needed directions (or as in this case tested them despite knowing exactly where I was going), but this time the Highlander’s nav took me an extra block out of the way and then back across an intersection onto the same street I was driving down before arriving at my destination, which wouldn’t have been a big deal if that extra block hadn’t put me right in the middle of one of my city’s busiest streets during heavy congestion. I know the area well and therefore understood that it wasn’t trying to send me around blocked roads or any other traffic situation, something I proved when I drove back the way I would have normally driven in order to make sure the roads were clear. I’ve had much worse navigation experiences with other brands, but this trip with the Highlander will cause me to pay very close attention when using Toyota navigation in the future.

While it’s difficult to say if improvements to the 2017 model will include upgrades to navigation, I’ll make a guess the aforementioned missing front crash prevention features offered south of the 49th will find their way to our market later this year. Then again these haven’t been offered in XLE trim on other side of the border anyway, so it shouldn’t be an issue if you’re considering a mid-range Highlander. If you’re planning to buck up for a Limited, mind you, feel free to petition your local dealer.

The extra two forward gears that we already know are coming in next year’s Highlander will likely help fuel economy, the current model rated at a reasonable albeit hardly class-leading 12.5 L/100km city, 9.3 highway and 11.1 combined with FWD and 13 city, 9.8 highway and 11.6 combined with AWD. For class leading fuel economy you’ll need to opt for the Highlander Hybrid that gets a claimed 8.6 L/100km city, 8.5 highway and 8.5 combined, but that’s another SUV for a future review.

As for the current conventionally powered 2016 Highlander, it remains the one to beat amongst seven- to eight-passenger mid-size SUVs and the model I’d likely choose if my own money were on the line.
©(Copyright Canadian Auto Press)
Car Shopping Tools