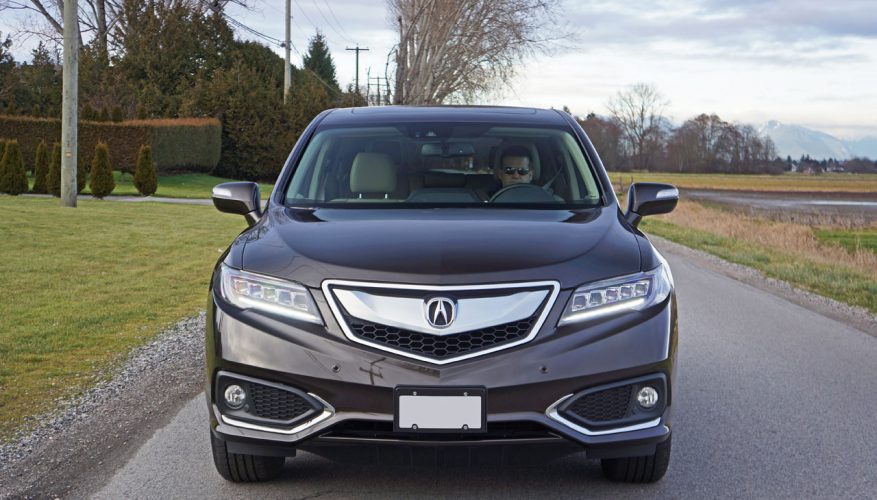 By: Trevor Hofmann
The RDX has evolved into quite the head-turner. I certainly take notice when one of the latest 2016 models drives by, and that wasn’t always the case. After more than a decade of production including two generations and another two mid-cycle makeovers, the most recent for this 2016 model year, it’s matured from an awkwardly shaped teen to a nicely proportioned adult, dropping its trendy hard-edged wardrobe for a more conventional albeit classier look.

I like that Acura has now refined its previous in-your-face “shield” grille into a smaller and more sculpted shape that adds distinctive character without pulling attention away from the rest of the design, thus leaving visual space for the brand’s gorgeous trademark LED headlamps, also new for this year, as well as some really nice chiseled detailing around the fog lamps on the lower fascia. Its profile remains long and sleek with sporty fastback-style rear pillars and glass up top plus a stunning set of machine-finished multi-spoke 18-inch alloys with grey-painted pockets now rolling below, while new red- and clear-lensed LED taillights nearly pull eyeballs as easily as the elements up front. Finally, the refresh is made complete by a restyled rear bumper cap, mimicking the chrome trimmed front fascia mentioned a moment ago. From nose to tail the latest RDX is a crowd pleaser, complete with just the right amount of metal brightwork to dazzle passersby without appearing as if it’s trying too hard.

That last line really sums up the RDX, it’s cool without trying to be. This is even more apparent inside where it combines high-tech features with high quality traditional luxury, although to be clear it’s not the most indulgent in the segment. For starters it’s a bit short on some de rigueur premium features such as fabric-wrapped roof pillars, their omission a luxury faux pas, whereas others in the segment also indulge more when it comes to soft touch surfaces. The RDX dash top is mostly soft pliable synthetic, except for the front portion under the windshield and the small hood overtop the infotainment screen, while Acura continues the malleable treatment down each side of the redesigned centre stack to the top point of the HVAC interface, after which it’s a matte-finish durable harder plastic including the glove box lid; the latter of which feels and sounds cheap when closing (with an after-rattle no less). The door panels include a black portion made from the same high quality ductile material as the dash top, whereas the rear section is finished with a very upscale, heavily padded French-stitched insert. It’s genuine feeling leatherette, lending a rich look and feel, with the same application used for the side and centre armrests. In juxtaposition a large portion of the mid door panels as well as the lower panels are hard plastic, as is the entire centre console accepting that armrest, but the console is nevertheless an efficient use of space thanks to a large covered bin ahead of the shifter for a phone and power cord, the latter notable as there are USB and aux ports plus a 12-volt power outlet hidden within. There are also two cupholders plus three-way buttons for heating and cooling the front seats, or at least this was the case with my top-line Elite trimmed tester.

Those seats were very supportive and comfortable with perforated inserts for the cooling system and ample adjustment for my backside’s needs, although the two-way fore and aft powered lumbar support might not fit everyone’s lower back as ideally as it did mine. Surprisingly, no heated steering wheel was included in Elite trim, and it’s a manually adjustable steering column as well, but paddles at the 9 and 3 o’clock positions made the RDX a lot more fun to drive than many in this class.

Performance is an RDX hallmark, its standard six-cylinder engine also upgraded by six horsepower and one lb-ft of torque for 2016, with output now at 279 horsepower and 252 lb-ft of torque, and while it only gets six forward gears it was smooth with positive shifts, especially in Sport mode. To access its most entertaining setting just pull the shift lever to its rearmost “S” position and enjoy, with quicker shift increments and higher revs before gear changes, steering that’s also direct and precise, and overall handling that’s certainly better than class average. The RDX balances out its great handling with a very compliant ride that made the entire process all the more enjoyable, this complemented by an interior that was quieter than expected.

To help achieve all of the above Acura combines amplitude reactive dampers with the RDX’ MacPherson strut front and multi-link rear suspension, while traction is aided via AWD that only comes into play when needed in order to achieve the most efficiency possible, redirecting up to 40 percent of torque to the rear wheels during moderate acceleration in dry conditions or maintaining an even 50/50 torque-split in inclement weather, while stability and traction control assist further when required. Just the same, Acura could use a smaller displacement turbocharged four-cylinder to compete more directly at the pump while adopting the nine-speed automatic from the MDX as well as that model’s auto start/stop system, the RDX’ fuel economy hardly class leading at 12.4 L/100km city, 8.7 highway and 10.7 combined. On the positive, you get all that V6 power standard.

Acura visually highlights the RDX’ performance by adding a bold red engine start/stop button to the dash, plus my tester’s cabin was trimmed out with aluminum instead of traditional wood. Along with those hard shell roof pillars that should’ve been cloth-wrapped, this top-line RDX was also missing a panoramic sunroof, just a small powered glass moonroof above the driver and front passenger, although the overhead console featured a padded sunglasses holder, always appreciated, and an especially nice array of switchgear for the sunroof and AcuraLink telematics services, plus overhead lights and map lights, of course.

I mentioned earlier that the centre stack was redesigned, with both Tech and Elite trims now featuring two infotainment screens. The top display is dedicated to navigation duties most of the time, although along with related trip computer and traffic incident info it also includes access to phone messages, voice activation settings, a calendar, the clock, etc, all accessible after pressing the “MENU” button and rotating the large circular controller below the second screen. That lower display is a touchscreen for the audio and GPS-linked solar-sensing dual-zone auto HVAC systems, both ultra-easy to use while the former offers excellent sound quality.

Of note, Elite trim is new for 2016, the previous model only upgradable to a Technology package that included GPS-linked solar-sensing capability to the already standard dual-zone climate control system, a larger eight-inch infotainment display with navigation replacing a smaller and simpler five-inch monitor in the base model, a richer sounding 410-watt 10-speaker stereo improving on the 360-watt seven-speaker system, and a powered liftgate, but now that last item comes standard across the entire line while these other features remain standard on newly positioned mid-grade Tech trim, a model that also includes remote start, power-folding side mirrors, rain-sensing wipers, an “On-Demand” colour multi-info display, AcuraLink connectivity, blindspot monitoring with cross-traffic alert, leather upholstery, and heatable rear outboard seats, whereas Elite trim includes these items as well as the 18-inch alloys mentioned before, fog lamps, auto-dimming side mirrors, front and rear parking sensors, and the previously noted ventilated front seats.

Also standard is impressive interior space, the RDX surprisingly roomy for a compact, especially in back. Acura finishes the RDX cargo compartment better than most rivals as well, with high quality carpets and chrome metal tie-down rings, but it’s the process required to lower the 60/40-split rear seatbacks that won me over. Just tug on each sidewall-mounted lever to instantly add load capacity, Acura even including flaps that automatically fall into place to cover the gap that otherwise might swallow up small items like rolling groceries. The only detractor is a load floor that’s not entirely flat, a steep rise forming at centre that makes stacking boxes or other large items difficult. It’s a compromised setup, but I think most will appreciate the convenience of auto-folding rear seats over potential cargo space lost, and it’s still very accommodating with 2,178 litres (76.9 cubic feet) of total cargo volume or alternatively 739 litres (26.1 cubic feet) behind the rear seats, the latter slightly more than twice that of the ILX compact sedan’s trunk.

The only other questionable negative about this interior is its light Parchment colour, which makes dirt easily visible on the carpets, lower door panels and plastic portion of the thresholds, not to mention the seats that were already discoloured blue from the jeans of previous testers. This was especially noticeable on the driver’s seat that was darker than the others. If your wardrobe consists mostly of khaki coloured Banana Republic cargo shorts and Gap chinos or other types of non-dye bleeding clothing, by all means keep it beige, but if you wear jeans more often than not I recommend purchasing your RDX with its standard black interior.

To be fair, no vehicle can possible meet everyone’s wants and needs, especially one priced as well as the RDX and so fully featured in standard trim. That window sticker starts at $41,990 plus freight and dealer fees, with the Tech costing $44,990 and as-tested Elite available from $46,590, while there are no additional options other than paint choices, the base model available in five shades/colours and the top two trims in seven, my tester finished in Kona Coffee Metallic, which incidentally is the only colour solely matched to Parchment upholstery.

Interesting is how the market has responded to all of the 2016 upgrades. The RDX was already very popular, but within the past four months it’s replaced Audi’s Q5 for first place in combined U.S./Canadian sales with 18,309 collective deliveries compared to just 15,242 for the four-ringed German. In a nutshell it appears we collectively love the new RDX, and after a busy week behind the wheel I fully understand why it’s doing as well as it is. It looks great, drives very well, offers up a luxurious cabin filled with all the most useful features, is as safe as this class gets and should deliver better than average reliability; it’s a Honda under the skin after all. Together with its strong selling MDX, Acura seems to have the SUV market fully figured out.