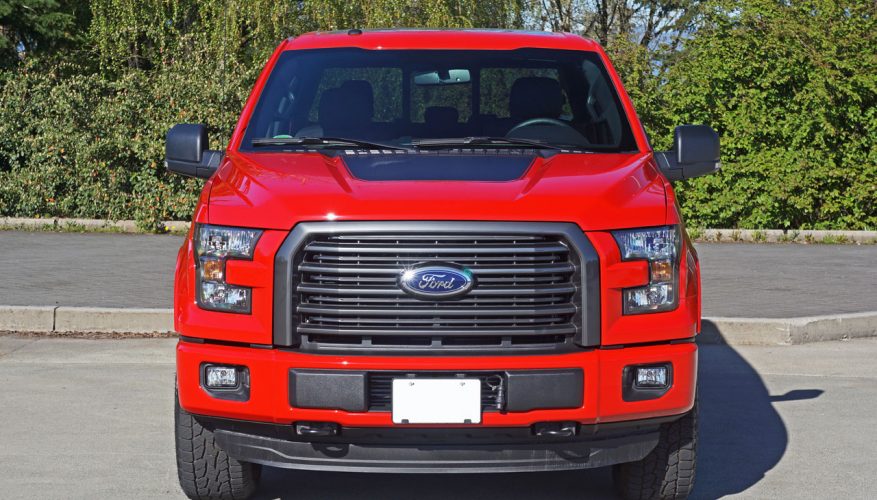 By: Trevor Hofmann
Be honest. When was the last time you saw a pickup truck that looked so sweet? Styling is critical in the truck segment, and while many will gravitate to the refined lines of GM’s trucks and others to the big rig overtones of the Ram, some even drawn to the relative upstarts from Japan, the F-150 pulls in more buyers than any of the above and has done so for as long as most anyone alive can remember.

Ford sold almost 900,000 F-Series trucks in its two northernmost North American markets last year, 118,837 of them in Canada, while its closest rival, Chevy’s Silverado, couldn’t get past 650,000 in the U.S. and Canada combined, with just 46,407 sold north of the 49th. Of course, we also need to factor GMC into the General Motors equation, its Sierra finding close to 280,000 buyers in the U.S. and Canada, which bumps GM’s total half-ton pickup deliveries to about 930,000, while Ram’s full-size Pickup managed almost 550,000 units on both sides of the world’s longest undefended border (that last stat might be old news if Donald Trump is elected president) and 91,195 specifically in Canada. The Japanese entrants noted earlier include the Toyota Tundra at almost 130,000 sold in both countries and the Nissan Titan with just over 15,000 (the new model should improve this lackluster number).

Just in case any GM fans noticed that Detroit’s fraternal twins actually outpaced Ford’s F-Series sales last year, don’t get too excited as it had more to do with blue-oval production issues than any shortage of customer demand, Q1 of 2016 making this very clear with 218,325 F-Series already down U.S. and Canadian roads, 32,204 of which were sold in the land of the almost free, and only 202,017 full-size pickups delivered by the General in northern North America, 21,921 sold in Canada (the Silverado doesn’t even keep up with Sierra sales here). Ram sold 135,700 Pickups in both countries with 22,333 delivered in Canada, whereas Toyota found 38,376 Tundra customers in North American with 2,582 residing in Canada, and Nissan 3,900 Titan buyers in both markets and just 629 here (these last numbers might get a chuckle from traditional truck buyers, but as we’ve learned in other auto sectors, never underestimate the longsuffering patience of the Japanese). In summary, Ford’s F-Series is back on top.

Of course its styling is only part of the attraction, albeit this particular truck looks especially nice due to its XLT Special Edition attire and Sport package upgrade, a respective $2,400 and $500 combination that first adds a tarnished dark grille with a black mesh insert, halogen headlights with dark housings, sporty black hood, door, side panel and tailgate decals, black running boards, a cool chromed single square-tipped exhaust pipe, and 20-inch tarnished dark-painted alloys on 275/55R20 BSW all-terrain rubber (in 4×4 guise), while the second package includes body-colour front and rear bumpers, door handles, and wheel lip mouldings, plus a box-side “SPORT 4X4” decal, and all of that is just what you see on the outside. Certainly my tester’s Race Red paint didn’t hurt its exterior image either, especially considering the Special Edition carries this theme into the cabin where bright red striped and stitched upholstery is the most noticeable upgrade, followed by a special console top, a leather-wrapped steering wheel, and unique carbon-fibre like inlays on the doors, while the Sport package gives it the 40/20/40-split front bucket sport seats, flow-through console and centre-mounted shifter.

The leather-wrapped steering wheel and leather shifter/boot combo are stitched with red thread to match the seats, not to mention the large leather-covered centre armrest-cum-console bin lid, while the rest of the interior lives up to the F-150’s good utility-focused quality and renowned functionality. By “utility” I mean a complete lack of soft-touch synthetics in a half-ton pickup truck market that’s been swinging more towards the luxury set lately, especially for trucks loaded up to my tester’s $60k-plus price point. This will be bad news if you’re partial to pampering, albeit hardly an issue if you use your truck as intended and would rather not mar up such opulent refinements with work grit and weekend mud. The argument as to which type of surface holds up better over time is unresolved, with some saying soft-touch can be damaged easier and others pointing to the scuffs and scrapes indelibly stamped into harder surfaces as a sign that it’s not as serviceable, but experience has me leaning towards dense rubberized surfaces that tend to bounce an offending object away before damage can be done. I’m guessing Ford has done its market research and you’re getting exactly what you want, those aforementioned sales numbers proof positive.

Where the F-150 literally shines is in electronic interfaces, its primary gauge package a colourful array of form and function, this one even highlighted with a bold red “SPORT” insignia over the tachometer, while at centre is a full-colour multi-information display that provides useful data at a glance. Additionally, the centre stack is now filled with optional as-tested Sync 3 infotainment, which is arguably the best of its kind in the entire auto industry. Why such praise? It appears graphically inspired by Apple’s iPhone and other well thought out smartphone and tablet operating system interfaces, albeit more with respect to simplicity and legibility, its clean, clear, uncluttered design enhanced with cool pale blue and white colouring, while it also connects easily to iPhone or Android devices via Apple CarPlay or Android Auto. It doesn’t feature proximity sensing capability like some competitive systems, but it’s ultra easy to sort out, even for those who are not digitally inclined, offers pinch and swipe capability, includes voice recognition that actually understands what you’re saying more often than not, and features easier setup processes, while additional functions include the usual rearview camera with active guidelines, superb phone and streaming audio connectivity, loads of available apps, mine including $800 worth of optional navigation that took me where I wanted to go without going out of its way to get there, and more.

Something I always appreciate in any vehicle tested is sunglasses storage, the F-150’s located in an overhead console that also houses the usual dome and map lighting plus controls for the massive dual-pane panoramic glass sunroof, an unexpected bonus that upped the bottom line by $1,750. Other features specific to this truck included blind spot monitoring for $650, wheel well liners at $180, a spray-in bed liner at $550, stowable loading ramps at $650 (how I wish I owned an ATV to make use of these), and Ford’s exclusive and always welcome $400 bed access step system that pulls out from within the tailgate along with a “railing” style hand grip, the total price of my test truck running $60,029 before adding freight, dealer fees and taxes.

Inclusion of the Special Edition package made an upgrade to either the XLT’s $3,200 301A or $6,300 302A Equipment Group necessary, mine with the latter that included the previously noted leather-wrapped steering wheel, 4.2-inch multi-info display within the gauge cluster, Sync 3 infotainment and reverse camera, while the features list continues with remote start, heatable powered side mirrors with integrated turn signals and driver’s side auto-dimming, an auto-dimming interior mirror, reverse parking sensors, power adjustable pedals, a 10-way powered driver’s seat with powered lumbar and manual lumbar for the front passenger, rear underseat storage, a powered rear window, the BoxLink cargo system, dynamic hitch assist for the rearview camera, a 110-volt/400-watt household-style three-prong power outlet, LED box lighting, and a trailer tow package.

Despite the rugged dampers, leaf-sprung solid rear axle and impressive payload/towing capacities, which measured a max of 1,311 kilos (2,890 lbs) of the former and 5,171 kg (11,400 lbs) for the latter, my test truck delivered wonderful ride quality and surprisingly good handling, no doubt this Special Edition and Sport package equipped model’s improvements making for greater agility than base, although the F-150’s inherently lightweight aluminum construction can really be felt through the corners, and at takeoff.

An important part of the stunning performance experienced and heavy load weights just mentioned was due to its direct injected and turbocharged 3.5-litre Ecoboost V6. This engine makes a considerable 365 horsepower at 5,000 rpm and 420 lb-ft of torque from just 2,500 rpm for seriously enthusiastic get up and go whether loaded down with gear or completely empty as I most recently experienced it, while estimated fuel economy is still commendable at 14.7 L/100km city, 10.7 highway and 12.9 combined.

On this note the Ecoboost V6 isn’t quite as thrifty as similarly powerful turbo diesels, and from what I’ve heard there’s no oil burner planned for Ford’s half-ton, while the blue-oval design team might want to consider something similar to GM’s bumper-mounted corner steps for accessing the bed, the tailgate embedded system Ford offers not usable when that tailgate is locked into its upright position; there are never too many options for climbing into a pickup truck’s bed, especially for those of us over 50.

Cargo in mind, large items you want to keep dry or away from temptation can be stowed in the rear passenger area of this SuperCrew model. All you need to do is lift the rear seat cushions out of the way against the back wall where they click into place, while there’s no shortage of space for rear occupants either, the SuperCrew’s legroom outrageously generous and other measurements more than enough for even the tallest of passengers.

This in mind, if you like the looks and features of this truck yet don’t need all of its interior space you can opt for the smaller SuperCab passenger compartment, the shorter cabin also benefiting from a longer six-foot-two box (the eight-foot box can’t be had with the Special Edition), while you can also do without four-wheel drive to save fuel and improve payload and towing capacities, or if you want to save even more fuel you can choose Ford’s new 2.7-litre Ecoboost V6, that just happens to be good for 325 horsepower and 375 lb-ft of torque, or alternatively the brand’s classic 5.0-litre V8 that bridges the Ecoboost gap with 385 horsepower and 387 lb-ft of torque, Ford’s well-proven six-speed automatic taking care of shifting duties across the line.

Yes, there’s no shortage of engine, body style or bed length possibilities with the F-150, or exterior colour options with 11 more available, its extreme personalization yet another reason it sells so well. No doubt this F-150 XLT Special Edition will be popular.
©(Copyright Canadian Auto Press)
Car Shopping Tools