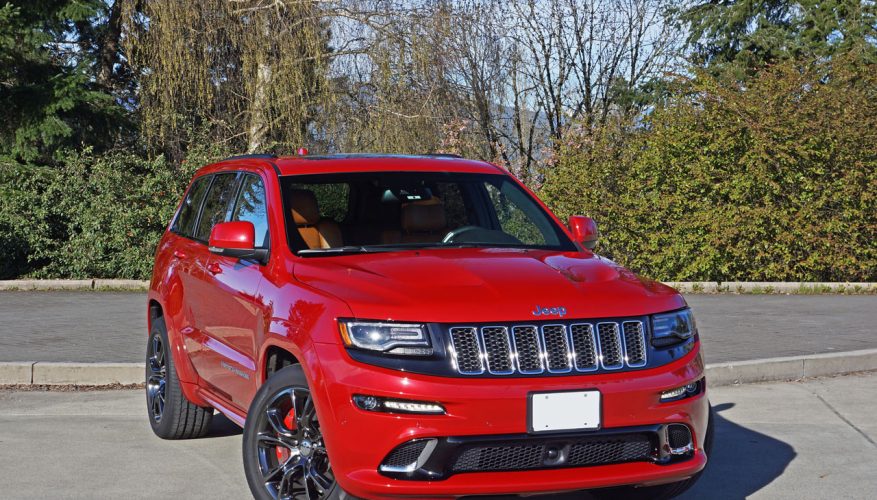 By: Trevor Hofmann
Since when did 475 horsepower and 470 lb-ft of torque merely become adequate in a performance SUV?

All of this is crazy fun, but I remember piloting that first-gen Grand Cherokee SRT8 around Southern California’s Willow Springs Raceway back in the day, rubbing up against 210 km/h (130 mph-plus) through the uncomfortably kinked final corner before entering the short, quick straight, finding even more speed and enjoying every hair-raising millisecond of it, just like I loved every moment behind the wheel of the latest 2016 version. After all, while these super-powerful premium branded ultra-SUVs have a little more oomph to offer well-heeled buyers, the still very capable Grand Cherokee SRT is a regular old Jeep for average, everyday middle-class buyers.

OK, maybe not. After all, while its price won’t ever escalate into six figures it was $81,175 as tested, the base model starting at $71,695. That’s a bit out of reach for the majority of Jeep fans, but then again the GC SRT isn’t targeting them. In fact, Jeep should create a new “Track Rated” badge in place of its usual “Trail Rated” insignia specifically for the SRT and its tarmac-only crowd, even if it was just for a little tongue in cheek laugh (go ahead and use that idea for the Trackhawk, Jeep… no charge).

Whether ripping up a drag strip where the hyper-fast GC SRT will hit 60 mph in about 4.5 seconds (which puts it at about 4.7 from standstill to 100km/h) and the quarter mile in just over 13 seconds (the Trackhawk will reportedly hit 60 in 2.7 or about 3 seconds to 100km/h, and the quarter mile in the 12-second range), or a circuitous racetrack like Willow Springs or Laguna Seca where it’s low-slung, road-hugging stance delivers sports car-like poise even around tight high-speed corners, Jeep’s super-SUV is on an entirely different mission than its trailblazing compatriots.

All of this makes for a pretty intimidating Grand Cherokee, especially in racy Redline Pearl paint. Jeep adds glossy black trim around the grille and headlight surrounds, the LED fog lamp bezels and lower grille area, the latter made even more eye-catching with aluminum brake vent trim, while the window surrounds and roof rails continue the inky treatment, as do the taillight housings and aggressive diffuser in the rear, that last item infused with a meaty duo of black chrome tailpipes. Most of the bodywork gets modified as well, with a completely unique front fascia, a ferocious looking dual-nostril hood, subtly bulging fender flares visually tied together with extended rocker panels, the doors appearing sculpted out of each side thanks to an aggressive coke bottle shape, while a large rooftop spoiler and reworked rear bumper finish off the track-ready transformation.

I had no track available this time around, a shame as it was hard to keep a lid on my enthusiasm. The Launch Control dial is right there on the lower console after all, menacingly taunting my weak adrenaline addicted mind. There’s no constabulary in sight, the shifter is already slammed to the left for manual mode and Track mode set, the big V8 humming away in the background with the deep gutturally relaxed purr of a lion as if nothing at all out of the ordinary is about to happen, albeit lions are always ready to pounce. And pounce it does, the big ute shockingly quick from standstill, the road ahead flashing forward at a surprising rate, trees blurring past each side window, and the cars behind mere dots in the rearview mirror. This Jeep is fast, although no more so than many performance cars I’ve recently tested, but they’re not big five-passenger SUVs amassing anywhere near 2,315 kilos (5,104 lbs).

No matter, the aforementioned steering, suspension and brake upgrades combine with the Grand Cherokee’s inherently stiff body structure and already nicely sorted aluminum-intensive fully independent front and rear multi-link suspension with lightweight hollow stabilizer bars for surreal at-the-limit handling, the SRT seeming to defy all natural laws as it snakes its way through tight, twisting two-laners, my temporary racetrack a near desolate riverside haunt in backward farm country one moment and then scaling a circuitous 900-metre (3,000-foot) three- and four-lane slope up to a favourite ski area the next, those Brembos tirelessly capable on the way back down.

Yes, this might be the best snow bound weekend warrior in existence, being that both Snow and Tow modes come as part of the GC SRT’s standard package, my tester upgraded with a $795 tow package that increases its trailering capacity to 3,266 kilos (7,200 lbs), although I’m sure the aforementioned super-utes make similar claims. I haven’t spent time in them all, although I’ve driven some in their current states of tune and done a few stints behind the wheels of recent predecessors, each offering a unique take on high-speed family hauling. Of course, I’ve witnessed their various representatives scoff at the mere mention of this high-powered Jeep’s name, the commoner’s brand not worthy of note next to Her Majesty the Queen’s chosen ride (which originally started out as a farmer’s tractor, I might add) or one of Zuffenhausen’s (or should I say Bratislava, Slovakia’s) ultimately tuned VeeDubs. That’s the kind of snobbery Jeep is up against despite having more real 4×4 heritage than any of its competitors, but it’s not for any lack of luxury.

The original Grand Cherokee’s weakness was its interior, its then German ownership wanting to create a great divide between anything volume-oriented and its prestigious three-pointed star marque, or maybe it was that they’d bled Chrysler’s coffers so dry remaking Mercedes-Benz there was nothing left for the Auburn Hills’ brands, either way the ’05 through ’10 third-generation Grand Cherokee had an interior seemingly pulled from a Cracker Jack box, or should I say from a Kinder Surprise capsule, it was in Daimler’s hands after all (and don’t go informing me that despite using the German word for “children” in its name the Kinder egg is made by Italian confectionery Ferrero because I already know, but it doesn’t work quite as well with the story, especially considering Jeep’s current parent is headquartered in Turin). Its cabin wasn’t much better than the Compass and Patriot that came later, these about as plasticky as the Dodge Caliber they were based on, so therefore the fourth-generation Grand Cherokee’s much more premium-like cabin was a welcome breath of micro-filtered air.

It’s only been improved upon since its 2014 model year update with yet more luxuriant soft-touch synthetic surfaces, improved switchgear and higher grade electronic interfaces, whereas the SRT is enhanced even further with a dash top and instrument panel finished in stitched leather, roof pillars wrapped in black suede just like the roofliner, genuine carbon-fibre inlays across the instrument panel and down each door, stylish satin-silver aluminum in other key areas, an almost too thick flat-bottom leather-wrapped heatable sport steering wheel, bright metal pedals, heatable and ventilated Nappa leather sport seats with perforated suede inserts, heatable rear outboard seats, active noise cancellation, plus a unique driver configurable TFT primary gauge cluster as well as SRT Performance Pages added to the infotainment system’s plethora of regular premium functions (select these via the “SRT” and “CUSTOM” buttons to the right side of the rotating Selec-Terrain controller; Launch Control is to the left).

Jeep upped the luxury quotient yet further by sheathing the seats in beautiful optional full Laguna leather, also with perforated suede inserts albeit tanned in Sepia, a caramel colour, that added a rich elegance more along the lines of Solihull’s 4x4s albeit priced more like a Jeep upgrade at just $1,500, while overhead a $1,695 panoramic glass sunroof delighted rear passengers almost as much as the two front seatback-mounted flip-up monitors fed by the $2,150 DVD rear entertainment system (there’s even a set of RCA plugs and an HDMI port on the side of the front passenger seat). I was more taken by the $1,995 SRT High Performance Audio package, a Harman/Kardon system that comes complete with 19 ridiculously good speakers, Logic7 multi-channel surround-sound, and a 900-watt, 12-channel DSP amp.

The SRT also pulls other luxury and convenience features up from lesser Grand Cherokee trims such as bi-xenon HID headlamps, proximity-sensing access with pushbutton ignition, heatable powered side mirrors with integrated turn signals, rain-sensing wipers, a dual-zone automatic HVAC system, adaptive cruise control with auto-stop, front and rear parking sensors, a sunglasses holder (I know that’s a minor convenience to some, but for me it’s a Ray-Ban must-have… and yes, Jeep buyers don’t wear Prada), a navigation system and rearview camera with dynamic guidelines for the infotainment display, blindspot monitoring with rear cross-traffic detection, forward collision warning with active braking, a powered liftgate, and more.

I’m starting to think anyone buying one of the premium branded super-SUVs is wasting their hard-earned cash, although there’s no talking sense to an inflated ego. Reality is, luxury goods don’t make much if any logical sense, but nevertheless they fly off of shelves and dealer lots alike while the companies that make them reap profits galore. I like Jeep’s take on premium performance, because the Grand Cherokee SRT delivers loads of top-tier style, an interior to get weak in the knees for, and go-fast goodness to make those already trembling joints quake and quiver even more, while all of the GC’s practical capability remains, its cargo area only finished to a higher fully carpeted and metal-ribbed standard while its fuel economy is claimed to be 13-percent better than the older less powerful version at a five-cycle EnerGuide rated 18.5 L/100km city and 12.6 highway, partially due to auto start-stop at idle and the same class-exclusive cylinder deactivation technology, whereas the new generation can travel some 800 km (500 miles) on a single tank of premium fuel compared to just 720 km (450 miles), this also due to a larger gas tank.

The Grand Cherokee SRT is an ultra-performance SUV that still makes a modicum of sense, whereas that Trackhawk version might just cause me to lose what’s left of my sordid mind. Onward and upward Jeep, you’re playing in the premium crowd now.
©(Copyright Canadian Auto Press)
Car Shopping Tools