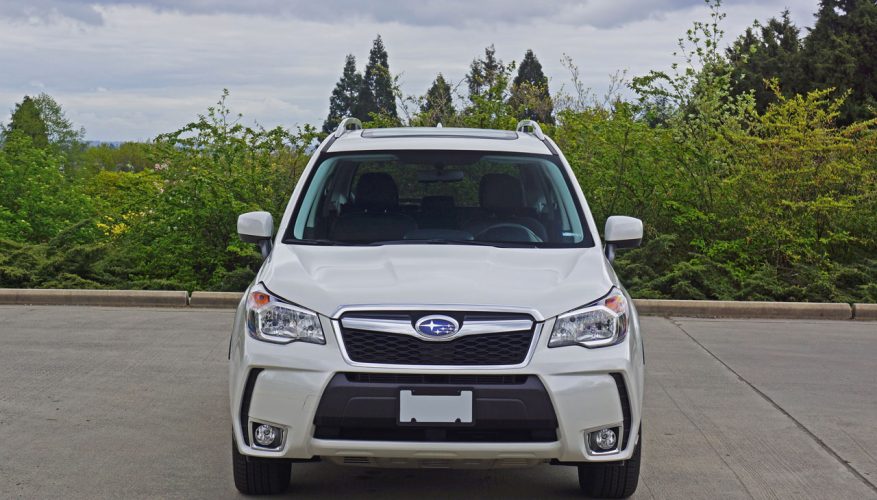 By: Trevor Hofmann
Are you bored with your car? I could recommend the legendary Subaru WRX that has the ability to turn any mundane commute into a memory you’ll never forget, but that may not suit your family’s requirements. This is why Subaru builds the Forester 2.0XT, a WRX for regular folks.

The Forester has been a compact SUV staple since it arrived here in 1998, and along with the entire crossover sector has experienced increased Canadian sales almost year over year with its annual numbers more than tripling over the past decade alone. Ditto for the Subaru brand that’s grown at almost the same rate. Look over at some of its key rivals and you’ll see a different picture however, the majority showing a much more gradual upward bell curve and others with a trajectory pointing in the opposite direction.

Why is Subaru doing so well? First and foremost the Japanese brand enjoys some of the best customer loyalty in the industry, so they don’t experience the same level of attrition as most rivals. There are many reasons for this, from a near total dedication to the performance and safety benefits of all-wheel drive to reliability that’s way above average, its adherence to horizontally opposed “boxer” four- and six-cylinder engines only rivaled by ultra-premium brand Porsche that also experiences top-tier dependability, albeit not as good as Subaru’s best overall score amongst mainstream volume brands in Consumer Reports’ 2016 report card on reliability. AWD isn’t its only safety attribute either, the Forester being reviewed here notable for its 5-star NHTSA crash test rating and those equipped with optional front crash protection features, dubbed the EyeSight Safety System, earning a coveted IIHS Top Safety Pick + rating.

The Forester looks rugged enough to withstand anything thrown at it, its body bulking up to appear more SUV-like since the previous generation. I like the new design and so, it appears, do the masses of new buyers who have stepped up since this fourth-gen model arrived, those aforementioned sales numbers rocketing 57-percent upward from calendar year 2012 to 2013 when this all-new Forester first arrived as a 2014 model.

That means it’s in the third year of the current design with each season bringing subtle improvements such as a standard colour multi-info display atop the dash plus a standard rearview camera for 2015, as well as a sizable 6.2-inch touchscreen infotainment display with sharp, crisp, clear graphics and attractive colour combinations plus Subaru’s Starlink interface as standard equipment for 2016; a larger and more feature-filled 7.0-inch display gets added to top-level trims.

Both infotainment systems allow seamless smartphone integration that let you pipe music or podcasts from your personal library over the audio system or alternatively downloadable content from app services like Aha and Pandora via integrated LTE Wi-Fi capability and SiriusXM Connected Vehicle Services, while Starlink also has the ability to update you with calendar entries, news and weather info, plus its telematics capabilities will automatically notify authorities if you’re in a crash, help with stolen vehicle recovery, deliver remote vehicle services, and send monthly diagnostic reports, or the buttons on the overhead console can be used for contacting a Starlink representative similar to GM’s OnStar. There’s no navigation in Touring trim, this feature exclusive to the Limited model’s larger display that also includes multi-gesture touch controls and the ability to show and read your text messages, but aforementioned SiriusXM allows for satellite radio with its hundreds of audio options. Additional 2016 enhancements include more satin-silver metallic accents on the instrument panel, turn signals that now flash three times after a single flick of the column stalk, and optional adaptive cornering fog lamps.

My tester benefited from all of the base model’s improvements, but was upgraded to mid-range 2.0XT Touring trim. This meant that it received a completely redesigned front fascia incorporating a blacked out centre bumper cap that makes its lower grille look larger and more aggressive, this bookended by a more complex set of projector headlamps positioned above unique vertically slashed brake duct-style vents surrounding circular fogs at each corner, while stylish machine-finished 18-inch alloys with black painted pockets round out its side profile, silver roof rails get added up top, and dual stainless steel exhaust tips look better from behind. From up front the XT looks so different from 2.5i trims that you might mistake it for a newer model, which is reason enough to spend the $3,500 extra required to purchase one over the 2.5i Touring that starts at $29,995, the 2.0XT Touring available from $33,495 plus freight and dealer fees, whereas the base Forester 2.5i can be had from just $25,995.

Of course there’s much more to the 2.0XT Touring than styling, with additional features including a large rooftop spoiler overtop a powered liftgate with programmable maximum height, so you won’t scratch it on the ceiling or a low hanging pipe in your parking garage, plus a cabin that’s upgraded with dual-zone automatic climate control. I should probably mention that along with the items already noted the Touring benefits from features found on lesser Forester models, such as auto on/off headlamps, a windshield wiper de-icer, a tilt and telescopic leather-wrapped multifunction steering wheel, a leather-wrapped shift knob, a sunglasses holder, a comfortable 10-way powered driver’s seat, heatable front seats, great sounding six-speaker audio with HD radio, USB and aux inputs, voice activation, a massive panoramic-like glass sunroof, a folding centre armrest with cupholders for the reclining rear seats, a retractable cargo cover and tray, PZEV emissions equipment, and X-Mode with hill descent control along with steering wheel-mounted paddle shifters. Believe me, you won’t feel shortchanged with any of the Forester’s trim levels, whereas the top-line Limited will make it seem as if you’ve graduated to premium status.

The feeling of quality extends to the cargo compartment where the scrolling soft tonneau cover even includes a narrow extender section on the opposite side to fill the gap between the rear seats, while my tester came with a nice heavy-duty cargo tray to keep the carpeting clean and dry. This covered a deep storage compartment hidden below the cargo floor, the sturdily crafted floor-lid overtop fitting snuggly in place. Even the way the 60/40-split rear seatbacks fold down to create a flat loading floor exudes quality, cargo capacity expanding from an already accommodating 892 litres (31.5 cubic feet), which is about twice the volume of a mid-size car’s trunk (the Legacy’s trunk holds 425 litres or 15.0 cubic feet), to 1,940 litres (68.5 cubic feet) as tested; base models get slightly more cargo space.

Still, the Forester doesn’t pamper to quite the same level as the smaller Crosstrek or larger Outback, its dash top and instrument panel finished with nice soft touch surfacing, even stretching halfway down the centre stack, yet its door uppers made from a harder composite, this probably due to its more family-oriented nature and need for long-term durability over luxury. Just the same its padded leatherette inserts and armrests, the former perforated and the latter highlighted with attractive contrast stitching, are plenty comfortable, while that light grey contrasting thread gets added to the sporty leather seat bolsters, their cloth inserts featuring a stylish black and blue weave. The Forester’s switchgear is well made with tight gaps and nice premium-level damping, the steering wheel buttons and toggles especially nice while incorporating two of my favourite XT upgrades, “S/I” and “S#/I” controls for its SI-Drive modes; the S for “Sport” and I for “Intelligent”.

Sorry it took me so long to get back to that WRX reference made at the beginning of this review, but I’m the type of guy who likes to save the best for the last. All 2.0XT models get an upgraded twin-scroll turbocharged 2.0-litre four-cylinder that puts out a surprising 250 horsepower and 258 lb-ft of torque. While not quite up to the levels of the rally championship winning four-door sedan, this five-door CUV nevertheless provides more engine output than any four-cylinder competitor plus the handling chops to control the power, the Forester riding on the same MacPherson strut front suspension and double wishbone rear setup as the WRX, not to mention an identical Symmetrical all-wheel drive system when paired to Subaru’s Lineartronic CVT, which is standard on the 2.0XT.

The automatic makes power delivery smooth and effortless, this a far better continuously variable transmission than any rival, and not just because of its paddle shifters. It comes down to positively engaging shift increments that make it feel more like a conventional automatic yet still provide the efficiency benefits CVTs are renowned for, while those SI-Drive modes sharpen the experience with quicker throttle response and heightened shift points, the latter letting the little four-cylinder maximize performance in comparison to default mode that focuses on fuel economy gains.

Driven at more relaxed speeds the 2.0XT is five-cycle EnerGuide rated at 10.2 L/100km city and 8.5 highway, which means that it isn’t much thirstier than the 170 horsepower base engine and ultimately thrifty when compared to V6-powered competitors.

While I know many owners will hardly ever look under the hood, I can’t help but comment on how much effort Subaru has put into visually celebrating this little 2.0-litre turbo engine. Really, even the WRX engine bay doesn’t look this good, but you certainly can see the similarities. There’s no longer a scoop atop the hood despite some Forester fans repeated requests, but a rubber surround gathers air from the grille before forcing it into the silver grated intercooler positioned within the wonderfully louvered, chromed and Subaru-badged engine cover. This truly is one of the nicest engine compartments in the auto segment, at least below the rarified supercar league.

Such is just one of many surprises that set the Forester apart from its more mainstream volume branded competitors. From its standout styling to its top-tier performance, loads of new comfort and convenience features to Subaru’s highest rated reliability and the Forester’s impressive safety record, it’s a hard combination to beat and reason enough to make sure the Forester becomes a shortlist priority when choosing your next compact SUV.
©(Copyright Canadian Auto Press)
Car Shopping Tools