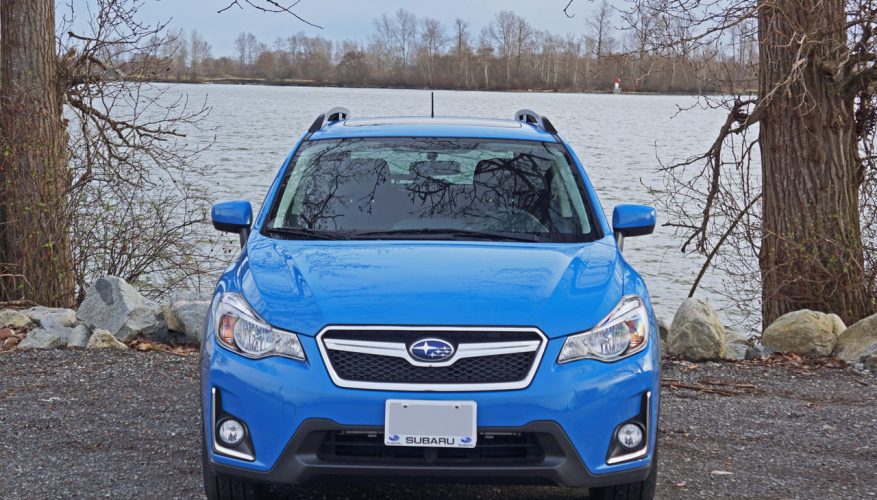 By: Trevor Hofmann
Every now and again a crossover comes along that’s really quite brilliant. In this case we should expect as much from Subaru, one of if not the original crossover utility creator.

Certainly there were car/SUV combinations before Subaru disrupted the status quo, the short-lived Willys-Overland Jeepster from the last mid-century coming immediately to mind, plus of course AMC’s Eagle that arrived in the late ’70s and sold throughout most of the ’80s. Subaru’s GL AWD Wagon, which also hit the market in 1979, is even more notable because it was the springboard of a corporate identity that would soon lead to the wonderfully wacky Brat, probably the only compact car-based pickup to ever find success, and eventually the ’94 Outback that’s now legend for launching the modern-day crossover era.

Crossovers have shown up in all shapes and sizes since then, all of which, like the Outback, are based on unibody car platform architectures, albeit most doing their best to imitate 4×4-capable SUVs. The compact Forester falls into this latter camp, which is probably why it’s Subaru’s most popular North American model, whereas the Crosstrek being covered here is more of a niche model that just happens to also be a very strong seller.

Subaru doesn’t really have a weakling in its lineup, it’s biggest problem being an inability to get enough cars to satisfy demand. The brand’s Canadian numbers are 12,706 Foresters last year, 11,426 Imprezas, 9,992 Outbacks, and 8,422 Crosstreks, with only the mid-size Legacy family sedan, Impreza-based WRX/STI performance sedans, and BRZ sports car selling in lower numbers.

It’s easy to understand why the Crosstrek has become so popular, as it looks great and it services a unique subset within the compact crossover SUV segment that wants more of a car-like experience than the usual tall, upright CUV. I’ve been a fan since it debuted, especially when catching sight of it in one of its more eye-catching colours like Jasmine Green Metallic, Desert Khaki or my tester’s Hyper Blue; unfortunately Tangerine Orange has been discontinued. Also discontinued, the car’s XV prefix will no longer be part of the Crosstrek model name here in North America.

As you may have noticed, it’s basically a raised Impreza 5-Door with a redesigned front fascia, some cool body cladding added around the lower edges, yet more go-anywhere trim incorporated elsewhere, plus beefier wheels and tires, the Crosstrek filling the shoes of the old Impreza Outback Sport, albeit to better effect.

Subaru offers the Crosstrek in base Touring trim, with a Sport package, and with the same Sport package plus a Technology package add-on, which is how I tested it, while you can keep upgrading to the Limited package or alternatively the Limited with the Technology package, while there’s also a range-topping Crosstrek Hybrid. I’ll leave that last one for a future review and instead focus on the one driven while touching on the other conventionally powered trim levels, and for simplicity’s sake refer to them as Touring, Sport, Sport Tech, Limited and Limited Tech.

The Sport doesn’t offer a lot of kit above the base Touring, although its HID headlights and larger rooftop spoiler add visual impact whereas its leather-wrapped steering wheel and shift knob, plus the powered moonroof overhead make for a nicer interior, while at just $2,000 above the base model’s $24,995 plus freight and dealer fees it represents good value. The Tech package added $2,500 for an as-tested price of $29,495 and comes with steering responsive fog lamps, proximity access with pushbutton ignition, a windshield wiper de-icer, and Subaru’s EyeSight Driving Assist system that includes adaptive cruise control, lead vehicle start alert, lane departure warning, lane sway warning, pre-collision brake assist, and pre-collision throttle management. When so equipped the Crosstrek qualifies for an IIHS Top Safety Pick + rating, whereas all trims achieve a five-star NHTSA crash test rating.

If you’re wondering about all of its other safety gear, not to worry as it includes the usual assortment of airbags plus one for the driver’s knees as standard equipment, as well as traction and stability control, ABS-enhanced four-wheel disc brakes with electronic brake-force distribution, brake assist, and a rearview camera, while the base model also gets a touchscreen display audio system with six speakers to go with that camera, plus satellite radio, Bluetooth, a 4.3-inch multi-information display housed within the primary gauges, single-zone auto HVAC, heatable front seats, cruise control, tilt and telescopic steering, heatable powered side mirrors, regular fog lamps, auto on/off headlights, roof rails, 17-inch alloys, and more.

In case you want to take your Crosstrek further up the food chain, Limited trim adds LED turn signals onto the side mirrors, chrome exterior door handles, a larger touchscreen with navigation, dual-zone auto HVAC, leather upholstery, and more.

No matter the trim, the Crosstrek is finished nicer than the majority of compact cars and SUVs, which is a big change for Subaru that didn’t always measure up when it came to soft touch refinements. The Crosstrek’s dash top is completely soft and pliable, however, wrapping right down to the midway point of the centre stack, while the door uppers are also finished with a soft synthetic treatment featuring comfortable padding underneath, this finer attention to detail truly making for premium-like experience both up front and in the back where Subaru duplicates the luxurious pampering. Additionally, nice satin-silver trim adorns the instrument panel and door panels, while the door inserts are made from a plush woven fabric that matches the seat inserts. The padded leatherette armrests on the doors and at centre feature cool orange stitching that pulls cues from those sport seats as well as the leather-wrapped steering wheel and leather-clad shifter, while there are even designer clothes-style orange tags sewn onto the seats embroidered with the Crosstrek nameplate.

Other interior highlights include attractive chronograph-style primary gauges with grey-blue faces and metallic rims, the aforementioned multi-info display at centre as clear and crisp in resolution as anything in the class and controlled via high-quality steering wheel switchgear, although it’s not quite as fully packed with functionality as some. A real-time analog fuel economy meter sits at the bottom of the speedometer dial, and while serving as a useful reminder to drive more efficiently it’s not really an accurate indication of how much gas you’re consuming. No worries, because atop the centre dash is a dual-display showing average fuel economy, exterior temperature, the time (via digital clock that was set up analog-style) to the right and detailed HVAC info to the left, while if you toggle a switch that sits between the two centre vents just below the hazard light button at centre you’ll access yet more features such as a different real-time graph-style fuel economy indicator that’s much easier and much more accurate, or you can switch to another screen that displays the four-wheel drive system in real-time, etc.

This leaves the infotainment system just below for audio control, plus apps including Subaru’s Starlink that provides news, food, weather, music, podcasts, audiobooks, and other multimedia content via its own apps, Aha or Pandora, while there’s also a settings section for personalizing the infotainment system as well as the car’s various functions, and of course an interface for phone setup and use. My phone connected easily and worked flawlessly throughout my test week, while the audio system played music and podcasts from my smartphone via Bluetooth audio streaming. It actually has a built-in automated graphic equalizer that lets you quickly switch from bass- and treble-centric settings to a flat sound that’s better for talk radio, or instead you can create customized presets for different styles of music. It’s a pretty slick system that sounds superb when optimized for the genre of music you’re listening to.

At the opposite end of the spectrum, the previously noted HVAC system is a ultra-simple and easy to use thanks to automatic function, although it took a little longer than average to heat up the cabin. The two-way heatable front seats didn’t take any time at all to warm, however, and stayed nice and toasty at their hottest temperature setting.

The Crosstrek is roomy for a compact, as the roofline is high and there’s ample space from side to side, while the rear seating area offers comfortable outboard seats with decent legroom. A large wide hatch is ideal for loading large items into the cargo area, and when necessary the 60/40-split seatbacks fold mostly flat, other than a two-inch ridge where the rear floor meets up with the base of the seats. There aren’t any levers on the cargo sidewalls to lower them, but I didn’t have any trouble reaching the organ stop-like pull-tabs on top of the seatbacks and I’m just five-foot-eight; alternatively you can lower them from the side doors. Altogether the Crosstrek provides 1,470 litres (51.9 cubic feet) of total cargo space when both rear seatbacks are lowered, or 632 litres (22.3 cubic feet) with all the seats in use.

Back up front, the Crosstrek provides excellent sightlines front, side and rearwards, while large side mirrors allow for good rearward visibility. As noted, Subaru includes a reverse camera that certainly helps when backing up, but it’s a rudimentary one that doesn’t include active guidelines.

As for the drive, the Crosstrek’s fully independent front strut and double wishbone rear suspension setup balances ride and handling duties ideally, with very little intrusion from road imperfections such as broken pavement, bridge expansion joints, and the like, while it takes to corners well when the need for speed arises. I wouldn’t go so far to say that it’s designed for performance first and foremost, but I flung it through some local backroads and thoroughly enjoyed myself, never feeling concerned about its ability to stay upright amid sharp turns, while the compliant suspension just noted made sure all tires kept full contact with the road surface. Likewise, on the highway the Crosstrek maintained its lane easily at high speeds while keeping wind and road noise to a minimum.

I never took it off pavement, although I’m willing to guess with 220 mm (8.6 inches) of minimum ground clearance and Subaru’s acclaimed Symmetrical AWD underfoot it would prove much more capable than the average cute ute, this no doubt translating into excellent grip in mid-winter snow too, all of which would make the Crosstrek an ideal companion for regular trips up the ski hill.

The standard 2.0-litre horizontally opposed four-cylinder would guaranty steep grades didn’t slow down your progress, as its 148 horsepower and 145 lb-ft of torque provides good acceleration off the line and more than adequate passing performance, while the optional continuously variable transmission responds very well whether left to its own devices, where it’s ultimately smooth, or when being rowed through the gears via the shift lever or its steering wheel-mounted paddles. Those familiar with my writings will appreciate that I’m not normally a big CVT fan, but Subaru does this type of gearless box better than most others. Downshifts are very quick and feel a lot like a regular automatic whereas upshifts, while certainly less direct than a sport-tuned version of a conventional autobox or an automated double-clutch unit, result in positive pseudo gear changes that are actually quite satisfying.

Quite satisfying are two words that work well to summarize a week spent with the Crosstrek, and while I would’ve also enjoyed a stint behind the wheel of a five-speed manual equipped version, my CVT tester delivered sporty yet comfortable and accommodating transportation in a stylish, well made, nicely equipped five-door, and looked great doing so. That it also manages a claimed 9.1 L/100km city and 7.0 highway while meeting Partial Zero Emission Vehicle (PZEV) standards is more than just a bonus, not to mention that it comes from a carmaker rated highest amongst mainstream volume brands in Consumer Report’s latest 2016 report card on reliability.

The Crosstrek is just one more example of why Subaru owners are so incredibly loyal. I couldn’t recommend it any higher.