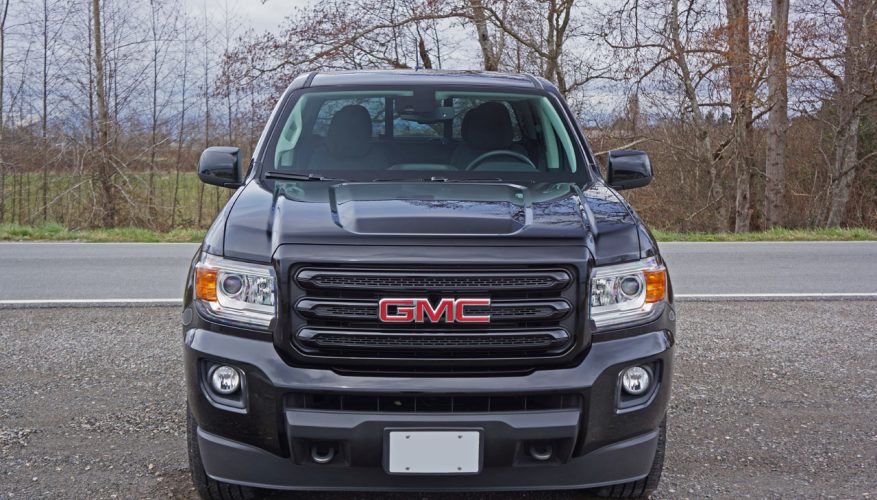 By: Trevor Hofmann
Do you think kids still debate over which two GM pickup trucks look better? Chevy or GMC? I was a city kid too, but I spent many a weekend and much of each summer enjoying the great outdoors, and when discussing with my friends at school or brother at home I always chose GMC over the bowtie brand, not that there was much else different about the two models. The same applies today, with my personal preference and GMC, although now there are two pickup truck nameplates within each brand.

Back in the ’70s only Chevy offered a compact pickup dubbed Luv, which was cute but nothing a real truck fan could get excited about. The Chevy S-10 and GMC Sonoma that arrived in 1982 were quite a bit stronger and tougher looking albeit still compacts, whereas the larger and much more attractive first-generation Colorado and Canyon pickups didn’t come along until 2004. After an extremely long initial lifecycle, briefly interrupted by a two-year hiatus between 2012 and 2014, the Colorado and Canyon were reborn after most thought they were gone for good, both larger and improved in every possible way, and thanks to attention paid to the right areas they’re now competing fiercely within the mid-size pickup truck segment.

The close of 2015 saw the Colorado and Canyon collectively closing in on the bestselling Toyota Tacoma, but despite the two models’ best sales since 2007 they weren’t able to outpace the redesigned Toyota that saw its own sales climb considerably. In the end the two GM trucks fell 2,042 units short of matching the Tacoma’s Canadian sales, with 9,730 deliveries compared to 11,772. The Chevy won over the majority of buyers with 5,095 driving one home, whereas the GMC fared pretty well overall with 4,635 new owners. Things look similar for the start of 2016, with Q1 sales resulting in 1,131 Colorados, 1,038 Canyons (totaling 2,169 for GM) and 2,902 Tacomas. What about the Nissan Frontier and Honda Ridgeline? The Frontier found a total of 3,622 buyers throughout 2015, although a significant 970 over the first three months of 2016 (possibly spurred on by increased showroom traffic due to greater interest in the all-new Titan), whereas the all-new Ridgeline isn’t even out yet so we’ll have to wait to see if it’s able to rejuvenate Honda’s light truck sales.

The Ridgeline brings up an important point. Where many auto scribes lauded it when initially introduced for its unibody design and seemingly innovative trunk under the cargo bed, it never really worked for me. I suppose that growing up with pickup trucks in my early years made me appreciate their rugged simplicity, not to mention how a blown tire in a fully loaded Dodge Dakota helped me realize that the same thing occurring in a Ridgeline would mean I would’ve had to shovel a load of bark mulch onto the ground before accessing the spare. It’s this type of oddball thinking that proves the outgoing Ridgeline’s designers and product planners didn’t really know trucks, whereas the Canyon is a pickup made by real truck people. That’s why it’s selling well, and the Ridgeline’s comparatively poor sales reflect its radical nature.

The Ridgeline was butt ugly too, or at least that was my not so humble opinion, while the Canyon looks fabulous. I actually saw the exact same truck as my tester pulling up beside me on the way home today, a black on black SLE Crew Cab 4WD that looked every bit is good as the one in these photos. I couldn’t help but nod at the driver as he drove up alongside, a salute to his good taste. Little could he know that this guy in a Nissan Micra was on his way home to finish off a review of the clone to his Canyon, but such is the wonderfully strange way life is.

It really is a superb looking ride, all of my test truck’s gorgeous black goodness due to its Nightfall Edition upgrade. You can purchase any Canyon trim with Onyx Black paint, one of seven colour choices available, but it’s a must-have if you want to get all the other Nightfall improvements, while you’ll also need to move up to mid-grade SLE Crew Cab trim to do so. The extras include a body-colour grille, a blacked out front bumper, machine-finished twinned five-spoke 18-inch alloys with dark polished argent painted pockets, dual-walled, an angle-cut polished exhaust tip, a remote starter, sliding rear window, spray-in bedliner, and thick 127 mm (5-inch) assist steps. The $5,615 upgrade might be a difficult pill to swallow for some, but the result looks so sweet that it’ll be hard to say no.

A truck that looks this awesome couldn’t be powered by a four-cylinder, so don’t worry because the V6 is prerequisite. Don’t get me wrong, as there’s nothing wrong with a 2.5-litre direct-injection four-cylinder capable of 200 horsepower and 191 lb-ft of torque, but let’s face it, if you’re going to cruise in something this badass it’s got to come with power to back up the attitude. Fortunately the SLE Crew Cab 4×4 is standard with a direct-injection 3.6-litre V6 featuring continuous variable valve timing that makes 305 horsepower and 269 lb-ft of torque, which was more than ample to get this 2,040-kilo (4,500-lb) pickup moving at a rapid rate, also thanks to a smooth shifting and well-proven six-speed automatic transmission.

I should point out that you cannot get the SLE Nightfall Edition with GM’s new 2.8-litre four-cylinder diesel, a $4,390 option that might not save you that much at the pump over a three- or four-year term but nevertheless delivers a stump-pulling 369 lb-ft of torque from a deep rooted 2,000 rpm. It ups the Canyon’s max tow rating from an already considerable 3,175 kg (7,000 lbs) to 3,492 kg (7,700 lbs), and no doubt would improve my as-tested truck’s five-cycle fuel economy rating from 13.5 L/100km city and 9.8 highway, but the diesel’s EnerGuide rating has yet to be announced.

Along with plenty of power my tester had a sublime ride, better actually than most crossover SUVs and many cars. Truly, the days of slamming a car by saying it rides like a truck are well over and done with, because today’s trucks tend to ride a lot smoother than all but softly sprung luxury sedans. The Canyon is also a decent handler, although let’s be clear that its agility remains well within the truck range. Still, it holds its own around corners if not pushed too hard, although it’s more at home on the open highway where it cruises effortlessly and comfortably thanks to a well sorted suspension and nicely contoured, supportive seats.

I found one thing strange, however, that at an as-tested price of $45,145 plus freight and fees there aren’t any seat heaters up front. For that price I’d expect them in back too! At least they’re covered in a comfortable, good looking fabric that stays mostly warm in winter and relatively cool in summer, that is when compared to leather that comes standard, along with three-way heatable front seats, in top-line SLT trim. GMC finishes the SLE’s seats with attractive patterned inserts and contrast grey stitching around the bolsters, the latter a nice match for the contrast stitched and padded leatherette dash top and instrument panel facing, making the Canyon a classier than expected addition to this mid-size pickup truck class.

On that note the Canyon SLE comes with a stylish primary gauge cluster comprised of classic white numbering and red needles spinning around a black background encircled by red for the tachometer and speedometer, the space between filled with a high-resolution full-colour multi-information display, while fuel and temperature meters are positioned up above in a separate section. Atop the centre stack was a large eight-inch full-colour infotainment touchscreen featuring extremely crisp resolution and very nice graphics. Like the multi-info display it’s also filled with useful features including the expected audio controls along with satellite radio and Bluetooth streaming, plus Apple CarPlay, phone connectivity with integrated text messaging, which includes a separate screen showing all of your most recent calls and texts that’s easy to see, read, or have read to you via the voice activation system, while a rearview camera, optional navigation and when included an excellent seven-speaker Bose audio system were also featured. You can access many of these functions by steering wheel controls on both the front and the back of each spoke.

The leather-wrapped steering wheel is stitched in the same light grey thread as the seat bolsters, plus it’s formed more like a sports car’s wheel with carved thumb spats and a nice thick meaty feel. The armrests at side and centre get the padded leatherette treatment much like that on the dash, this particular Canyon done out very nicely. It doesn’t feature all of the soft touch synthetic detailing as others in the class, particularly the door uppers that are made from the hard stuff, but some will see this as a positive being that harder plastics are normally more durable over the long haul, and this is a truck after all.

Of note, the upgraded HVAC system is automatic, which is good, albeit just single-zone. Being in the driver’s seat nine times out of ten this doesn’t bother me all that much, although my partner tends to like a warmer setting than I do and therefore it would pose a problem on road trips. GM may want to step up to a dual-zone system for the Canyon’s mid-cycle update, as its main competition already offers the more advanced HVAC system.

On the positive, only extremely large people will find the Canyon’s interior cramped, and then only from side to side. I’m a medium-build five-foot-eight male, which I realize swings me just over to the smaller side of average, so I could see some of my really beefy friends having a bit of trouble in the driver’s seat, but that’s why GMC makes its well proportioned Sierra after all. Just the same the majority of body types should find this mid-size truck ideal, especially those in back that will enjoy first-class legroom.

As for cargo space the rear seat cushions fold up and out of the way for stowing taller items you need to keep secure and dry, whereas anything else can get tossed in the bed where there’s room galore. That point in mind, the number one reason I’d choose a GM truck over any competitor is purely practical, those rear bumper corner steps noted earlier. They make accessing the bed as easy as can be, and I’ve been one of the unfortunate ones who’ve slipped off of wet slippery bumpers while trying to clamber up to a truck’s bed while the tailgate is lowered, the space left for a toehold usually quite small even for my pint-sized feet. GM solved this problem once and for all with simple, grippy plasticized steps integrated into both corners of the rear bumper, a brilliant idea that should be copied by every pickup truck manufacturer on the planet.

Of course, even without those intelligent corner steps the Canyon SLE Nightfall Edition had me at howdy (“hello” just seemed too urban). It looks so damn good, followed up with excellent road manners and a really nice interior filled with just the right amount of features. Compared to a full-size Sierra with similar goodies it’s priced quite reasonably too, making the Canyon a good choice for those needing less room and capability. It’s a mid-size pickup made for real truck people, and one you can feel proud to be seen in.
©(Copyright Canadian Auto Press)
Car Shopping Tools