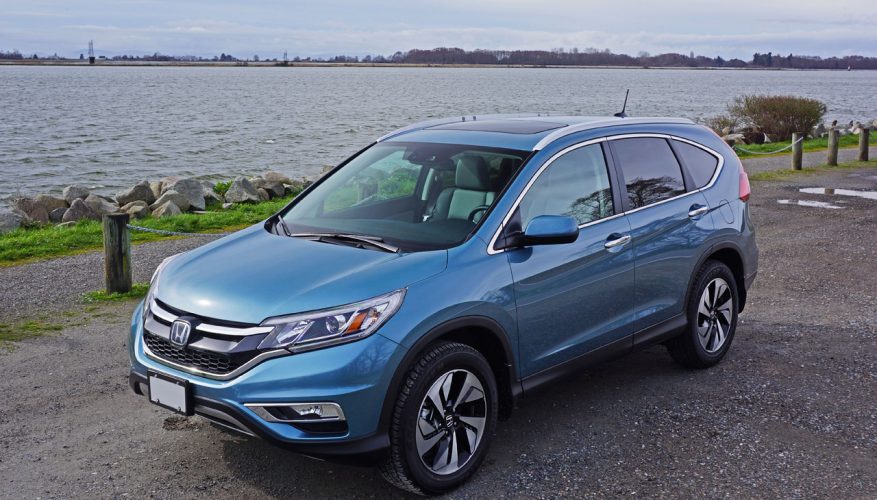 By: Trevor Hofmann
There’s a CR-V around almost every corner. Whether one of the latest fourth-generation models that are starting to become most plentiful, or the near omnipresent third-gen version, the still stalwart second-generation model, or the first of its kind that I see everyday parked in my neighbours driveway, the CR-V has been one of Honda’s greatest success stories since 1995. As if it was a family pet, some owners would never even consider giving their trustworthy motorized companion up, like that neighbour who’s had his since new and drives it nearly every day, while others want to be first to move up to the next generation or most recent mid-cycle update.

I’m sure Honda loves both types of customers, because the first type help to tell great stories about the CR-V’s enviable quality and all-round dependability, while the second type regularly fill the coffers, keeping everyone happy from those at the dealer level to the hundreds who build them at Honda’s Alliston, Ontario assembly plant, not to mention everyone at the automaker’s Markham, Ontario headquarters. Buying a CR-V is also a win-win for the manufacturing sector of our economy, a positive for the environment as it’s one of the less polluting family vehicles available, and beneficial to our health care system as you’ll be less likely to end up in emergency if ever in a crash than some others in this class, as the 2016 model earned an IIHS Top Safety Pick + when equipped with all of its front crash prevention gear and a 5-star achiever from the NHTSA in all other trims. So a good argument can be made that the biggest winner is each CR-V owner that gets all of these advantages plus a very nice little SUV.

To my eyes last year’s refresh resulted in the CR-V’s best styling yet, especially up front where a more rugged looking front fascia incorporates a bolder more attractive grille and headlight assembly than previously, the latter enhanced with stylish LEDs. Its general profile can’t be mistaken for anything other than a CR-V, with its sloping front undertray and similarly curved albeit diametrically opposed rear hatch providing a familiar silhouette. The taillights continue in their tall vertical design, albeit now mixed with the LEDs, while Honda has dressed up top-tier Touring trim with plenty of chrome front to back. Honda fans will love it, and I’m guessing it’ll be more likely to attract others than ever before.

Those who finally decide to find out what all the fuss is about and venture away from their current brand will no doubt like the CR-V’s interior as much as its exterior design, if not more. First off, the new model is much more refined than previous iterations, Honda now finishing the instrument panel with soft-touch stitched and padded synthetic from the left side of the driver to the right side of the front passenger, plus very nicely detailed door panels featuring comfortably padded perforated leatherette inserts and stitched leatherette armrests, the latter two copied for the centre armrest. That’s about it for soft-touch surfaces, other than the seats of course, which are wonderfully comfortable from front to back and feature perforated inserts to help cool them off mid-summer, albeit I was much more appreciative of the two-way front seat heaters that get seriously warm when set to their highest temperature. Some nice Touring upgrades include fairly real looking glossy faux hardwood across the instrument panel, some metallic satin-silver trim, chrome accents, an upscale two-tone motif overall, and superb digital displays.

Anyone who mistakenly thinks the CR-V is a white bread type of commuter’s appliance need only sit behind the primary gauge package to see how unique and creative Honda can get with the details. It utilizes an unorthodox multi-level design featuring a small black and white multi-information display at centre, surrounded by a large speedometer that gets edged with gear selector readouts to the left and warning/info lights to the right, while a left-side tachometer and right-side fuel and temp gauges sidle up next to these. The multi-information display gets controlled via a set of buttons on the steering wheel, as do the usual audio, phone and cruise functions, my tester getting an adaptive system for the latter, while the rim itself is nice, thick and leather-wrapped.

Honda includes a bright green Eco button to the left of the steering column, just above two rows of ancillary buttons for the powered liftgate, windshield wiper de-icer, and various active safety features, while to the right of that column a similarly shaped bright red button takes care of starting and stopping the engine. It’s part of the Touring’s proximity-sensing system that also opens the doors and rear liftgate, whereas the centre stack just to the right of the starter button is laid out with dual screens, the top one including the date and time, compass and other information, and the much larger bottom one filled with state-of-the-art full-colour high-resolution infotainment kit such as a backup camera, navigation, phone connectivity, audio system access, info and settings interfaces, Honda’s Link Connect, and more.

The audio system proved good for most duties, such as talk radio, light rock, most dance and other genres of music, but when I cranked it up for an unexpected but nevertheless welcome dose of Soundgarden’s Black Hole Sun it left something to be desired when it came to depth and response of bass tones. I played around with its rudimentary equalization controls, which only feature bass and treble faders, and managed to make it sound slightly better, but audio quality is clearly not the CR-V’s forte. The Zombie’s Time of the Season (What’s your name? Who’s your daddy?) and Justin Bieber’s Love Yourself sounded good, and Pink Floyd’s Another Brick in the Wall ok, but Radiohead’s Paranoid Android was just awful, the system not able to handle the intricacies of a song like that.

I suppose this makes sense as the CR-V is hardly about extremes. Rather, it’s a vehicle that has succeeded by meeting most everybody’s needs and many of their wants, this point most noticeable when out on the road. It delivers the tall ride height and excellent outward visibility most want from the compact SUV class, while its overall seating position and ergonomics can’t be faulted. All controls fall easily to hands and feet, the steering is light and responsive, the ride is good enough albeit better without my tester’s 18-inch alloys, and handling actually a bit better than I remember. Pick-up off the line is more than adequate, but it’s probably not the type of vehicle you drive quickly anyway, at least I didn’t other than for testing purposes. Don’t get me wrong, as it has no problem sprinting away from standstill thanks to its direct-injection 2.4-litre four’s 185 horsepower and 181 lb-ft of torque, or powering through a set of serpentine corners, it’s just a more relaxed type of CUV, some of that nature likely brought about by its smooth yet hardly sport-oriented continuously variable transmission and generally comfort-biased demeanor.

Of course, this meant I was more or less pampered all week, the CR-V the perfect choice for morning commutes, mid-day errand hopping, weekend jaunts around town, and even an unexpected find on Craigslist that had me and my partner driving most of the way across the city to pick up a special piece of furniture we’d been looking for, and the CR-V a ready and willing participant. This is where I want to invite every other manufacturer of compact SUVs to purchase a competitive CR-V and tear its rear seat lowering mechanism apart in order to find out how it works, as it’s clearly the best in the industry. All you need to do is open the rear liftgate, this one powered as noted earlier, and pull on either of the cargo wall-mounted levers to flatten that seatback. It drops down immediately in one smooth and near silent movement, while a hard shell extender automatically falls into place to cover the gap between the seatbacks and cargo floor so rolling groceries and other small cargo can’t disappear beneath. If this isn’t reason enough for the CR-V’s strong sales, I don’t know what is. Notably the rear seatbacks don’t fold completely flat like some others in the segment, instead rising slightly as they extend forward, but this is a small issue that is far outweighed by the system’s convenience. Altogether there’s a sizable 1,054 litres (37.2 cubic feet) behind the rear seatbacks and 2,007 litres (70.8 cubic feet) when they’re laid flat, which should be more than enough cargo room for most peoples’ needs.

The cargo wall-mounted levers come standard across the entire CR-V line, which includes the base LX, in both FWD and AWD for $26,290 and $28,590 respectively, the $30,290 SE, $32,290 EX, $34,290 EX-L and this top-line $37,090 Touring, all of which include AWD as standard. That most basic car also includes such niceties as auto-off halogen headlights, heatable powered side mirrors, the multi-info display mentioned earlier, a multi-angle rearview camera with guidelines, a 160-watt AM/FM/CD/MP3/WMA audio system with speed-sensitive volume control, illuminated steering wheel-mounted controls, Bluetooth streaming media and wireless phone connectivity, heatable front seats, rear privacy glass, hill start assist, tire pressure monitoring, four-wheel discs with ABS, and all the usual active and passive safety features.

As with most popular vehicles, the CR-V has earned its loyalty by being well equipped for the money asked, as well as well made, incredibly reliable and very fuel efficient with a five-cycle rating of 8.8 L/100km city and 6.9 highway with FWD or 9.5 city and 7.5 highway as-tested with AWD. That it’s now more attractive than ever, with a nicer cabin and better driving dynamics should help keep it within the compact SUV segment’s top three sales leaders for the foreseeable future.
©(Copyright Canadian Auto Press)
Car Shopping Tools