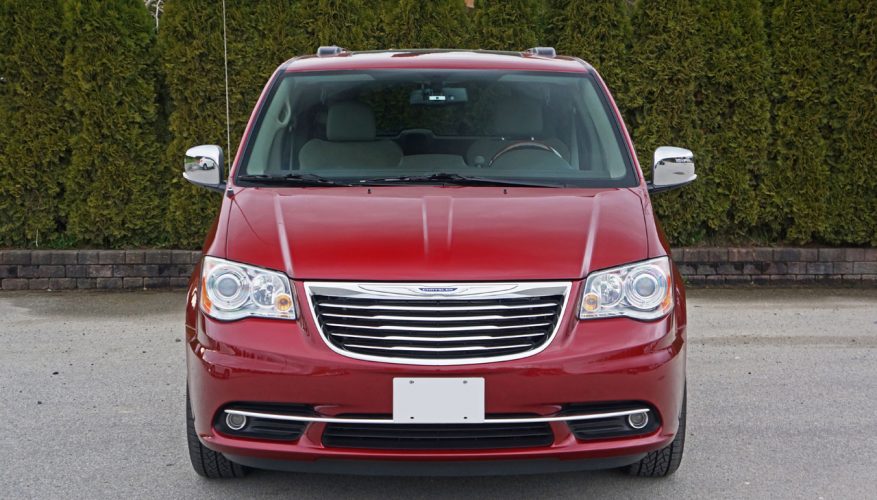 By: Trevor Hofmann
I feel like I’m writing a eulogy to an old friend rather than a car review, the 2016 Town & Country in its final season of availability after 27 years of playing second fiddle to the Dodge Grand Caravan in sales, yet concertmaster when it comes to upscale class and luxury. Still, while the name will disappear a Chrysler minivan replacement is already touring auto shows to rave reviews, the new Pacifica pulling its name from the Pentastar brand’s luxury crossover past in order to bridge the gap between ever-popular mid-size sport utilities and the diehard family hauler with sliding side doors.

While I’m tempted to wax strong on the new Pacifica, because I really like what I see and was impressed when poking around inside at Chrysler’s auto show stand, the outgoing Town & Country deserves my full attention out of respect alone. After all, few nameplates can lay claim to nearly 30 years of constant production, although it should be noted the previous Town & Country station wagon was produced for 43 years, from 1945 to 1988. Still, in today’s world car models come and go as quickly as the latest styles and trends (sometimes even faster), so the T&C’s market resilience is unusually impressive.

In fact the T&C hasn’t only enjoyed strong staying power, its Canadian sales have actually grown year over year during the past decade with 2005 only good for 602 units and last year’s tally resulting in 9,001. That final number, incidentally, is almost three times higher than Buick’s total Enclave sales, more than twice as much as Chevy’s Traverse deliveries, and thousands more than GMC’s Acadia. It’s notable that all of these mid-size crossover SUVs were the models General Motors substituted its Buick Terraza, Chevrolet Uplander and other minivans for (ironically, as recently as 2009 the old Chevy minivan enjoyed sales that were more than three times greater than their Traverse CUV replacement experiences now; so much for crossovers outselling minivans). The T&C also outsells the similarly sized seven-passenger Mazda CX-9 by about eight to one, the seven-occupant Ford Flex by more than five to one (as recently as 2006 the old Ford Freestar minivan outpaced current Flex sales by 6.5 to 1), and the seven-passenger Hyundai Santa Fe XL by thousands, while it almost matches Nissan Pathfinder sales. And if you think that’s good, the T&C’s platform sharing Dodge Grand Caravan outperforms every mid-size crossover SUV in Canada on the sales charts, with last year’s total numbering 46,927 (and that was a relatively slow 12 months being that 2014 sales were 51,759, and that wasn’t even close to its best year). Of course, the GC outsells every competitive minivan too.

While still a moneymaker for Chrysler, the Town & Country remains an excellent option in the minivan space, space being the most fitting word. It not only offers up a nice classy design, with my top-line Limited Platinum tester boasting Chrysler’s upscale chromed grille and chrome-trimmed lower engine vent with fogs below, chrome detailing down each side including the mirror caps, door handles, body-side mouldings and roof rails, plus a chromed tailgate garnish in back and bumper protector plate just below, all matching twinned five-spoke 17-inch alloys on comfort-oriented 225/65R17 Yokohama rubber at each corner, the metal brightwork made all the nicer thanks to rich looking Deep Cherry Red Crystal Pearl Coat paint. Yes there’s nothing wrong with the way the T&C looks, it’s just not the newest kid on the block.

Most importantly you get second- and third-row Stow ‘n Go seats, with tailgate seating no less. The latter hardly matters to me because it’s more of a gimmick that I’d probably never use, but a set of second-row seats that effortlessly fold flat below the load floor is the number one reason to choose a Chrysler or Dodge minivan over any rival. After all, isn’t convenience key for choosing a minivan in the first place? And as far as removing rear seats to access all available load space, nothing is more convenient than Stow ‘n Go. All you need to do is power the front seats all the way forward, slide the second-row seats rearward, remove the fitted floor mats from ahead of those seats, open the hatch exposing two large bins that can otherwise be used for storage, flip the seats into the waiting compartment, and recover the folded seats with the aforementioned hatch. On top of that, literally, I always place the floor mats back on the hatch lids so they don’t get scratched with whatever I’m loading in. Chrysler also included $650 worth of powered third-row seats with my tester, an added convenience that I appreciated, although from experience the third row is plenty easy to stow away or pop back into place.

Stow ‘n Go allows the ability to drop the kids off at school, head straight to the building supply store and pick up four-by-eight sheets of building material before heading home, without having to first go home to drop off the middle row of seats, which, if you’ve never tried, is a cumbersome if not backbreaking experience with all competitors. If Home Depot isn’t your thing, it could be the convenience of nabbing the awesome sofa you’ve always wanted that’s finally on sale, or the ability to take advantage of something large from a garage sale or Craigslist ad. You get the point, without Stow ‘n Go seats your minivan isn’t even as instantly functional as a crossover SUV, other than the convenience of side sliders and the extra room for rear passengers.

If you’ve ever owned a minivan and somehow lost your way by purchasing something less useful, like I did after years of Caravan ownership, roominess is something you never take for granted again. No crossover and none of the large SUVs offer the passenger comfort available in a Town & Country, while Chrysler went further with my loaner by including $2,000 worth of DVD/Blu-ray rear entertainment that houses two nine-inch screens at the second- and third-row positions of the full-length overhead console, plus full audio/video plugs, an HDMI jack, a remote control and wireless headphones. All that and there was still room for a $1,395 powered sunroof overtop front occupants, while the only other options included $475 for superb TomTom navigation, $700 for a Trailer Tow group that adds a Class II hitch receiver, load-leveling and height control, plus a wiring harness, making the T&C good for a 1,588-kilo (3,500-lb trailer), and $225 for the previously noted paint. Altogether my T&C retailed for $55,640 plus freight and dealer fees, which once again is much lower than most equivalently upgraded SUVs.

Some yet unmentioned interior details that set the Town & Country apart include attractive gloss hardwood trim across the instrument panel, all the door panels, and atop the steering wheel rim. Additionally the door uppers get the soft-touch treatment while each armrest is covered in stitched and padded leatherette, but really that’s about it as far as pliable plastics go, par for the course with the majority of minivans (although Pacifica improves on such touchy-feely quality). At least Chrysler finished the seats in upscale Nappa leather with Ultrasuede inserts, these boasting a rich crinkled look, while the brand’s classy analog clock rests at dash central.

As noted the TomTom navigation system is one of the best in the biz, not telling me I was in the depths of a suburban river 20 kilometers away while parking a Porsche Cayenne in my downtown underground, as previously experienced, or taking me way out off course and therefore delaying my trip twice, as the most current Honda Odyssey’s hopelessly hapless navigation did. I can therefore put up with its somewhat slow response, but on the other hand it’s filled with intuitive prompts for much easier use than most others available. I could go on and on talking about T&C Limited Platinum features, but I should probably allot more attention to how this minivan drives.

First off, Chrysler’s 3.6-litre Pentastar V6 is an absolutely wonderful engine. It’s so quiet and smooth, yet when pushed it makes sonorous noises that’ll put a grin on a performance fan’s face, while its well-proven six-speed automatic with manual mode is totally up to the task of matching the power unit. Certainly I’ll be interested to see how the Pacifica’s new nine-speed autobox performs, controlled by a rotating dial gear selector that’s similar to the one used in the Ram 1500 pickup, but for now this six-speed unit is plenty smooth and quite reliable. The engine makes 283 horsepower and 260 lb-ft of torque, which is more than any rival, while the T&C delivers superb ride quality too. Is it the best handling van in its segment? Probably not, but let’s get real for a moment, who buys a minivan for canyon carving? It more than holds its own through corners, actually surprising me with its agility when pushed hard, and it’s ultimately stable on the freeway, the T&C certainly fulfilling my performance needs and more, at least when it comes to family transport. Truly, it would be difficult to find a more comfortable vehicle than Town & Country.

As for fuel economy, none of today’s minivans are particularly mini and therefore their substantive weight (the base T&C weighs in at 2,115 kg/4,652 lbs) and standard V6 engines suck back petroleum with a near SUV-like thirst, the T&C good for a five-cycle EnerGuide rating of 14.1 L/100km city and 9.5 highway. If you think that sounds high it’s only a fraction worse than its competitors, an expense I’d be willing to pay to get the Town & Country’s many more convenience and luxury features, although it makes sense that Chrysler will be endowing the yet more efficient Pacifica with a plug-in hybrid option, hopefully not at the expense of Stow ‘n Go.

If I sound like a broken record after repeating Stow ‘n Go so many times, I make no apology. After all, people who read minivan reviews are either seriously considering purchasing one or emotionally supporting a recent purchase, and for those who bought a Town & Country or Dodge Grand Caravan I can honestly say you made the right choice for an active lifestyle. If you’re not the type to ever fully load up your van with whatever comes your way, or in other words if you could never see a reason to remove the second-row seats, then by all means check out every competitive van on the market, but if you, like me, regularly use your van as it was intended, there’s only one way to go, Stow ‘n Go. For those who want more luxury with their ultimate convenience, the Town & Country is an ideal choice that can likely be had with a bigger discount than the future Pacifica will allow, and even though I’ve already been up close and comfortable with the Pacifica I can still recommend a T&C as it’s an extremely well-proven entity with considerable financial advantages. Either way, I doubt you’ll be sorry about your purchase after spending time with the many benefits of any Chrysler van.
©(Copyright Canadian Auto Press)
Car Shopping Tools