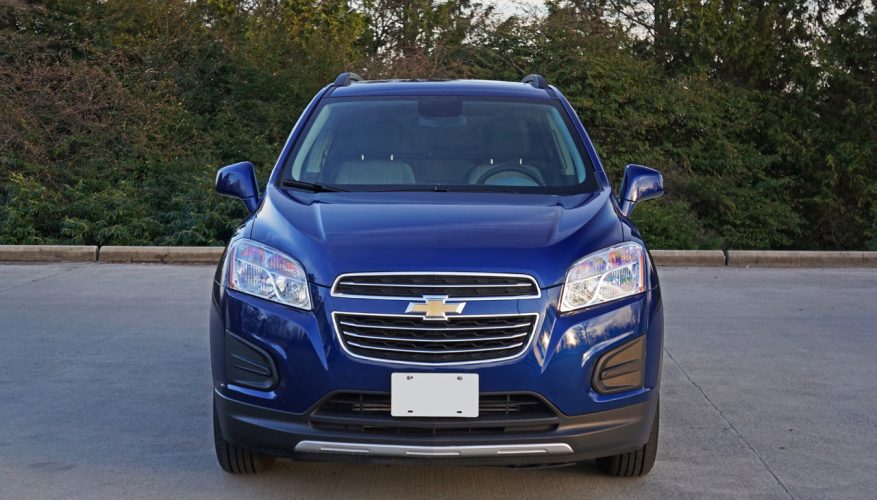 By: Trevor Hofmann
Most Canadians won’t know this, but we were first to get the Chevy Trax. It arrived here in December of 2012 as a 2013 model, and immediately became the bestselling subcompact SUV in Canada with 7,013 units sold throughout the 2013 calendar year. Our friends to the south couldn’t access it until December of 2014, two years later, after which it immediately jumped up to second place with 63,030 sales throughout calendar year 2015, only beaten by the bestselling Buick Encore.

Yes, it’s impressive to think that General Motors, an automaker once associated with large as a barge American iron, isn’t just outselling the imports and domestics alike in the fast-growing subcompact SUV segment, but downright slaughtering all competitors with last year’s Trax and Encore sales combining for 130,579 units in the U.S. compared to just 60,946 for the next bestselling Jeep Renegade (even if you include seven months of new Fiat 500X sales, which shares the Renegades platform, the total only climbs to 70,409 units), while here in Canada the Trax was just dislodged from its number one spot by the new Honda HR-V, and only slightly, with the upstart Japanese crossover finding 8,959 buyers to the Trax’ 8,156, whereas if you combine both domestic models’ sales the number rises to 13,071 units, making the GM duo the clear favourite amongst subcompact SUV buyers.

I always say that if you want to find one of the best in the biz, just “ask the audience”, a phrase coined by the popular late ’90s game show, “Who Wants to Be a Millionaire?” It’s not always the surefire way to find the best in a given vehicle’s class, but if the numbers stay strong, as has been the case for the Trax throughout its three-year Canadian tenure, it’s a very good indication as to the merits of the vehicle in question.

I tested the Trax when it first arrived and have reviewed it each year since, the 2014 model being a base LS and last year’s being a full-load 1.4 Turbo AWD LTZ, so as you might imagine I was delighted to get back behind the wheel for the 2016 model year, this time in LT AWD trim, a model that bridges the gap between almost basic and near luxury. It forgoes the 18-inch alloys, fog lamps, fancy sill plates, auto-dimming rearview mirror, Bose audio upgrade, leather-like upholstery, six-way powered driver’s seat, heatable front seats, and rear parking assist found on the LTZ, but as you’ll be able to see by perusing some of the photos of my tester, a number of those features can be added back to the LT via various packages and standalone options.

My $29,460 Blue Topaz metallic LT AWD tester included an $840 LT Plus package that added back the six-way powered driver’s seat and rear parking assist while also featuring unique deluxe cloth upholstery with leatherette bolsters, while an $1,100 Sun and Sound package included a powered glass sunroof overhead and returned the superb sounding Bose audio system to the Trax mix, whereas GM also threw in a set of custom-fitted all-weather floor mats for $185.

As you can imagine I didn’t feel like I was missing much from the previous LTZ, especially considering the LT comes standard with 16-inch alloy wheels on 205/70R16 all-seasons, cool looking silver skid plates front and rear, silver side rails up top, a six-speed automatic transmission, a remote starter, heatable side mirrors, a leather-wrapped multi-function steering wheel, A/C, Chevy’s MyLink infotainment system housed within a seven-inch colour touchscreen, a rearview camera, USB and aux inputs, satellite radio, a 110-volt household-style power outlet located on rear of the centre console, deep-tint rear glass, a storage drawer under the front passenger’s seat, and more.

And all this is within a car that comes standard with a 1.4-litre turbocharged engine, remote keyless entry, power-adjustable side mirrors, illuminated vanity mirrors, a 3.5-inch monochrome multi-information display with cool ice blue backlighting, steering-wheel mounted audio and phone controls, cruise control, OnStar telematics with 4G LTE and a built-in Wi-Fi hotspot, a flat-folding front passenger seatback for stowing extra long cargo, a rigid albeit removable cargo cover in back, a storage compartment under the cargo floor, four-wheel disc brakes (with AWD and rear drums with FWD), tire pressure monitoring, all the usual active and passive safety features, plus an astounding 10 standard airbags.

If the Trax has a weakness it’s in the touchy feely department, its cabin plastics of the harder sort that no doubt hold up well over the long haul yet don’t feel all that upscale during the process. In this subcompact class I’m ok with that, especially with such a family-oriented vehicle that needs to withstand the torture kids often dish out, but note there are others in the segment that’ll make you feel more pampered. Then again I was surprised to find fabric-wrapped A-pillars at each side of the windshield, likely a trickledown luxe item from the aforementioned Buick, but welcomed just the same. Additionally, the seven-inch touchscreen just noted is one of the best from a connectivity standpoint, MyLink allowing superb smartphone integration. It’s a nice layout too, with eye-catching graphics and plenty of fun colours that give the Trax a rolling nightclub atmosphere when the sun goes down. Ditto for the primary gauges ahead of the steering wheel, the aforementioned cool ice blue backlighting really looking sharp night or day, while the design of the chrome-trimmed gauge package is also modern and alluring with a large blue-ringed circular tachometer at the left and even larger rectangular display to the right, the latter incorporating a big digital readout for the speedometer and plenty of other gauges.

Chevy impresses with switchgear too, especially the steering wheel buttons and toggles that feel more premium than entry-level, whereas the three-dial HVAC interface is attractive with yet more chrome detailing and a nicely laid out design featuring large rotating knobs for ease of use while wearing winter gloves.

While all of this is appreciated, Chevy truly surprises the uninitiated with the Trax’ overall roominess, whether seated up front or enjoying the sizable rear passenger compartment. The rear seats are comfortable too, with good lower back support, while they fold flat via the usual 60/40-split configuration, albeit in a rather unusual process. Trax wasn’t first to utilize a dual-stage folding mechanism to maximize cargo capacity, and it’s not the only one on the market that does, but once you fit something in back that you previously wouldn’t have thought was possible you’ll be glad GM engineered it this way. First you’ll need to walk around to each side door to pop the lower seat cushion upward and flip it forward, after which the seatback lowers down and tucks in behind, making a perfectly flat load floor. The result is 1,370 litres (48.4 cubic feet) of maximum cargo space, while 529 litres (18.7 cubic feet) behind those seatbacks when upright is a pretty decent total for the subcompact SUV class as well.

All would be moot if the Trax didn’t drive well, but it really is a great little SUV to pilot around town or take out on the open road. It offers the tall ride height crossover buyers like, which improves visibility front, side and back, while its ride quality is amongst the best in the class and handling certainly up to par. As for the little 1.4-litre turbocharged four-cylinder, it’s a jewel of an engine that delivers strong performance with 138 ready and willing horsepower and 148 lb-ft of capable torque, while its as-tested six-speed automatic is a smooth shifting gearbox that even features a “+/-” manual mode actuated via a thumb toggle on the shifter knob. It’s clearly not the fastest or sportiest in the class, but I’ve learned such models rarely sell the best because most of us aren’t looking to break land speed records on our daily commute, we just want to get to where we’re going comfortably, safely and in a modicum of style, while saving a little at the pump is always welcome too.

To that end the Trax is a clear winner with a five-cycle EnerGuide fuel economy rating of 9.2 L/100km city and 7.0 highway with FWD or 9.7 city and 7.6 highway as tested with AWD, whereas the base six-speed manual with FWD is good for an even thriftier 9.1 city and 6.9 highway.

As for arriving safely, the Trax gets a five-star crash test rating from the NHTSA, which is a lot better than many larger SUVs.

The impishly tough looking little Chevy is a great all-rounder that I’m happy to recommend, because it really deserves its popularity. It’s stylish, well endowed with ample features, drives well, is incredibly roomy and versatile, is priced reasonably, and as just noted is fuel-efficient and safe. Make sure you test the Trax if you’re in the market for a subcompact SUV.