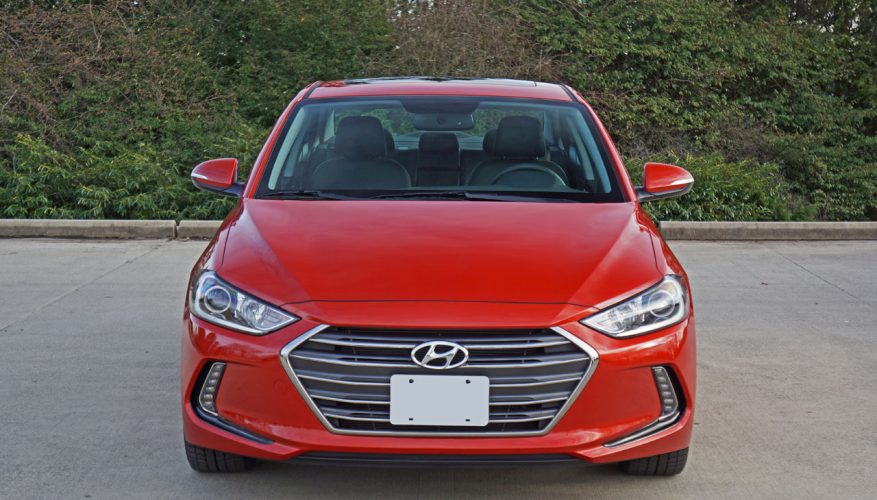 By: Trevor Hofmann
If Honda’s latest Civic is a bit too radical and the Corolla a smidge on the conservative side, this all-new 2017 Elantra should fit you to a tee. Hyundai has completely redesigned it from the ground up, with styling that immediately makes it more appealing and simultaneously more upscale.

You’d think that this was the upcoming BMW 3 Series D-segment competing Genesis G70 model, but it’s still a lowly Elantra fighting it out with the two aforementioned models as well as the Mazda3s and Chevy Cruzes of the world. Up front there’s a stylishly large horizontally ribbed hexagonal grille that’s nicely trimmed in chrome thanks to my tester’s upmarket Limited trim. The $26,249 Limited also gets chrome trim across its side window ledges, chromed door handles and attractively styled LED tail lamps at back, while its eye-catching vertically stacked chrome trimmed LED driving lights and LED-enhanced side mirror caps get pulled up from lesser GL trim.

My tester’s beautifully detailed projection headlamp clusters are standard with the base L model and even feature an escort function that stays on to brighten your path after arriving at your destination, although their auto on/off function also gets grandfathered up from GL trim, whereas the machine-finished 17-inch alloys with grey painted pockets at each corner can first be purchased in GLS trim just below the Limited model. Hyundai finishes off the rear end design of all Elantra trims with a sporty matte-black diffuser style bumper cap that matches the matte black spoiler integrated into the lower front fascia. It’s a confident looking compact sedan, not trying too hard to wow passersby like the aforementioned Civic or lulling onlookers to sleep like some others in the class. They hit the nail on the head with this design, and it’s going to sell well because of it.

If February’s sales are anything to go by, the Elantra is well in the lead with 3,793 down the road compared to 2,868 for Civic and 2,543 for Corolla, but that was an unusually slow month for the compact Honda and a bit of a downer for Toyota’s four-door too, while it was the first month of availability for this entirely new sixth-generation Elantra so no doubt pent up demand fueled its strong results. Still, while the Elantra did well for any given February, that monthly total wasn’t as impressive as the old version’s sales through parts of last year, especially September when it passed 5,000 units. That outgoing model achieved 47,722 total calendar year sales after December 2015 closed, whereas the second bestselling Corolla just squeaked past with 47,918, a mere 196 units between them (look for a possible changing of the second guard by the end of 2016), whereas the Civic found 64,950 buyers and therefore will likely remain in first unless its normally conservative loyalists don’t warm up to Honda’s new spaceship on wheels approach.

On that note, styling isn’t the only reason this new Elantra will sell well, as its interior is also very good. My example was top-line of course, so it doesn’t represent what most buyers will live with day in and day out, but the hard (and soft) points will be much the same. The differentiators compared to the GLS model below include leather upholstery, an eight-way powered driver’s seat with lumbar support and memory, a larger 4.2-inch colour TFT in-cluster multi-information display (lesser models get a 3.5-inch MID), a larger eight-inch touchscreen infotainment system with Android Auto and navigation, and an impressive sounding eight-speaker Infinity audio system powered by a 315-watt external amp.

As mentioned there’s an Ultimate trim level above Limited that adds HID headlights with adaptive cornering control, adaptive cruise control, autonomous emergency braking with pedestrian detection and lane departure warning with lane keep assistance. So equipped the Elantra Ultimate should qualify for an IIHS Top Safety Pick + rating, although we’ll have to see how it scores when the U.S. government agency’s 2017 model crash test information gets released, but the 2016 Elantra achieved a top 5-star rating from the NHTSA’s crash tests so the rest of the ’17 Elantra line should at least earn that organization’s highest crash test rating.

The new Elantra certainly has the right stuff to compete and win in the compact sector from a safety, features and styling point of view, but there are other elements that are critical to its success. Fortunately the interior looks good and quality is impressive. Like the exterior the Elantra’s interior design is less extroverted than the Civic, but that doesn’t make it any less appealing. I find it stylish, with a more traditional instrument panel layout that includes a classic dual-dial primary gauge package featuring a tachometer on the left and speedometer to the right with the aforementioned multi-information display at centre. The steering wheel is thickly wrapped in high-quality leather and nicely formed with sporty thumb spats for a comfortable feel and confident grip. Metallic accents add bling to the spokes and well-designed redundant switchgear includes four buttons to each side and two handy toggles for adjusting audio volume and mode to the left and scrolling through MID features plus setting the cruise control to the right.

A large full-colour high-resolution touchscreen infotainment system sits atop the centre stack, with a narrow row of audio, navigation, phone, and set up go-to buttons just below, the Infinity audio system a nice sounding complement to the fully featured and easy to operate display. A sizable dual-zone auto HVAC interface gets fitted below that, with buttons that are big enough to use while wearing winter gloves, while down on the centre console a metallic finished U-shaped interface surrounds the gear shifter, complete with three-way seat heaters, a button for the heatable steering wheel, plus a Drive Mode selector for choosing Eco, Sport or default settings.

Hyundai provides excellent ventilation across the upper portion of the instrument panel, as well as the expected soft touch surfaces throughout the cabin, the dash top and instrument panel nicely finished in a high-quality pliable synthetic, as are the door inserts and armrests to each side and at centre, and while each door upper is made from harder plastic, Hyundai coats them with matte finish that at least matches up well with the other soft surfaces. Of note, some others in the class finish the front door uppers in soft-touch synthetic along with a soft dash top in their topmost trims, although some don’t offer the pliable dash at all.

The sport style seats are trimmed in leather with perforated inserts, and those seat heaters just mentioned get extremely warm at their highest setting. Even the back seats are comfortable and supportive, while the outboard positions get two-way heatable elements in a market that only sees single on/off rear seat heaters when offered at all, even by premium brands (looking forward to experiencing how the Genesis G70 ups the ante). The Elantra delivers on rear passenger space aplenty, with zero chance of claustrophobia unless those in back are unusually tall, while the front portion of the headliner is pleasantly bisected by an overhead console incorporating a handy sunglasses holder plus a powered glass sunroof just behind. I should also mention my tester came with an auto- dimming rearview mirror with integrated Homelink garage door opener, a digital compass, and more, all items always appreciated in any class let alone the mainstream compact car segment.

There was absolutely nothing wrong with the outgoing Elantra from a driving perspective. Ok, it might not have been the most reactively agile in its class, but the Limited model’s direct-injection engine, advanced six-speed manual and automatic transmissions, compliant and comfortable ride, and decent enough handling that benefited from performance-oriented features like driver selectable modes helped make it the top-three seller that it is. The new model improves on most of the above with an even nicer ride and more responsive handling, no doubt enhanced by my tester’s 17-inch alloys and 225/45R17 Michelins. Normally Hyundais come stock with Korean tires, Hankook often getting the nod, but these were Michelin X-Ice winters due to a chilly mid-winter test week, and while winters are generally not as grippy as all-seasons or summer performance rubber, these are highly recommended winter tires that don’t give up much when it comes to performance while delivering excellent traction in slippery conditions. They certainly aided the Elantra through the curves, the car feeling totally capable even when pushed harder than most owners will likely attempt, whereas it was thoroughly comfortable even over rougher patches of pavement. Around town the Elantra is equally enjoyable, a fine companion for point and shoot inner-city traffic maneuvers or merely whiling away the commute home (that Infinity audio upgrade is worth it for moments like these).

I hardly even noticed its downgraded power, the previous generation’s 2.0-litre four making 173 horsepower and 154 lb-ft of torque compared to this year’s very different Atkinson-cycle 2.0-litre only putting out 147 horsepower and 132 lb-ft, direct-injection having given way to regular old multi-point fuel injection in an odd performance reversal yet welcome improvement in fuel economy. Of note, the base Elantra’s 1.8-litre four-cylinder has been scrapped for this same 2.0-litre power unit now standard across the line, with output up 2 hp and 2 lb-ft of torque.

Compared to last year’s Limited that was rated at 9.7 L/100km city, 6.7 highway and 8.3 combined with its six-speed automatic, the new 2017 model, with what appears to be the same six-speed auto, is good for 8.3 city, 6.4 highway and 7.4 combined. That’s a considerable difference that goes far to justify the performance losses, and like I said earlier, I certainly didn’t notice the downgrade, no doubt Hyundai’s engineers tweaking the transmission’s initial gearing for quicker takeoff and therefore making it feel responsive enough in most driving situations. Being that most Elantra owners live in urban settings where stop-and-go traffic is the norm, the engine swap won’t likely be an issue.

If your commute includes bringing the office home, or if stopping off at the gym (rink or driving range) is more to your liking than sitting in traffic, the Elantra’s trunk is amply large at 407 litres (14.4 cubic feet) and benefits from 60/40 split rear seat backs when the need to load in longer items arises. Helpful, Hyundai includes seatback pull releases accessible from the trunk, allowing you to drop both seatbacks without having to go around to each side door.

The new 2017 Elantra is a well thought out four-door sedan that should help grow its market share while maintaining its loyal base. It looks great, includes an attractive high-quality interior that goes above and beyond to pamper and delight with more features than most rivals, delivers both comfort and performance when behind the wheel and is plenty practical while doing it. That it’s priced well and comes with two extra years of bumper-to-bumper warranty coverage than most challengers are just more bonuses to make the Elantra stand out in this evermore-competitive compact crowd.
©(Copyright Canadian Auto Press)
Car Shopping Tools