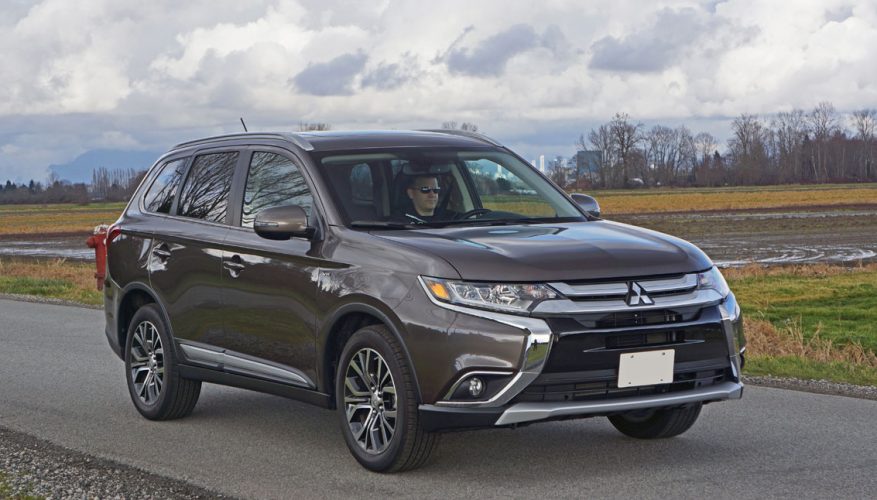 By: Trevor Hofmann
I don’t know about you, but to my eyes the Outlander looks much nicer in this taupe-mocha metallic than it did in black. Quartz Brown, as Mitsubishi calls it, softens the SUV’s harder elements and highlights its subtler charms, seeming to smooth out its long, upright profile, giving it an all-round classier appearance.

The Labrador Black model just noted was a four-cylinder ES AWC Touring trimmed version I tested just prior to this one, whereas the model before you today is a top-line V6-powered GT S-AWC variation on the Japanese brand’s compact crossover theme. I lauded the less equipped version for its improved styling, luxurious interior filled with more standard and optional features for the money than most competitors, excellent performance and thrifty fuel economy, so you’d be right in guessing that this more upscale, performance-oriented Outlander would also get an enthusiastic thumbs up.

For starters, the differences between the two are nominal at first glance, being that the base SE gets finished to such a high standard already, with a premium-grade soft-touch dash top wrapping all the way around the left side of the primary gauge package as well as the other way around the centre stack, plus the same treatment for the front door uppers and extremely nice leather-like French-stitched door inserts and armrests below these, while hovering above is a set of fabric-wrapped A-pillars, highly unusual for the class yet welcome just the same. My tester also included a Premium package that added fog lamps, silver-painted roof rails, 18-inch alloys, power-folding side mirrors with integrated turn signals, proximity-sensing access and pushbutton ignition, a high-contrast speedometer and tachometer, an auto-dimming rearview mirror with a Homelink universal garage door opener, an infotainment system with satellite radio and a rearview camera, leather upholstery, a powered driver’s seat, and a powered glass sunroof. Not bad for a gussied up base model, no?

I should also mention the ES includes yet more features grandfathered up to this top-line GT, such as a leather-wrapped steering wheel and shift knob, high gloss black plastic surfacing on the steering wheel spokes, centre stack surround, and shifter housing, while this upgraded model also boasted the same stylish grey bamboo-like inlays on the instrument panel ahead of the front passenger and across the door panels. The enhanced primary gauge package featured eye-catching blue, red and white on black dials with a high-resolution colour multi-information display at centre, whereas the digital graph-style gauges for engine temp and fuel were done out in a cool aqua green-blue.

The switchgear in the two models was also very good, with tightly fitted, well-damped buttons, knobs and toggles throughout, although I had issue with the rotating knobs on both trims’ infotainment systems, as they were tiny and therefore a bit difficult to twist. Fortunately the volume control on the left steering wheel spoke worked perfectly so I used it more often than I do with other vehicles, probably a good thing as it kept my eyes more focused on the road ahead. On that note the stereo sounded much better in the upgraded model thanks to way more power and a big thumping sub, this one producing awesome bass response ideal for dance and rock, while it also performed well when listening to other genres such as jazz and classical, not to mention talk radio.

Before I delve into the differences between the well-equipped base model and this GT, it’s worth noting there’s an SE trim in between that comes standard with the same 3.0-litre V6 as the GT as well as AWC, which is Mitsubishi-speak for all-wheel drive, plus it also gets a six-speed Sportronic automatic transmission with idle neutral logic and paddle shifters, a more conventional approach to the four-cylinder’s CVT. It gets standard 16-inch alloys too, which are smaller than the upgraded ones that the lesser model offered with its optional package, although this trim has a package with larger wheels and more as well, while other SE upgrades include front fogs with chrome detailing, LED turn signals integrated within the side mirror housings, silver painted roof rails, proximity-sensing access with pushbutton start, dual-zone auto HVAC, and a third row for seven-occupant capacity.

That third row is also standard with the GT, and it was surprisingly accommodating and comfortable (yes I climbed back there to make sure). I remember the flimsy third row Mitsubishi offered two generations ago and this is a solid move up, literally, its overall usefulness not only good for kids but also smaller adults (I’m a medium-build five-foot-eight and fit in easily).

I know, I could be rattling off the available options of a premium branded compact SUV, although if I were, depending on the brand, some of these items would be left off the menu. As it was, my tester featured the only option available to this top-tier Outlander GT, a $2,000 Navigation package that added the Mitsubishi Multi-Communication System (MMCS) with SD-card sourced navigation featuring real-time traffic information, 3D mapping, voice command, display guidance and a CD player, all integrated into a seven-inch LCD touchscreen. This meant the GT S-AWC’s base price of $36,498 plus freight and dealer fees grew to $38,498, which is still less than most fully-featured compact SUVs in the mainstream volume class that don’t offer anywhere near as many goodies and aren’t anywhere near as nicely finished inside.

Most don’t drive as well either. Suitably settled into the extremely comfortable, well-bolstered powered leather driver’s seat, I made sure to set the two-way seat heater to its topmost temperature for toasty warmth, much appreciated on a cold winter’s day. While I previously noted the four-cylinder’s CVT was better than most, I was glad the paddles at my fingertips connected through to a regular six-speed automatic, which together with S-AWC, launched the little SUV forward with gusto. The 3.0-litre MIVEC (Mitsubishi Innovative Valve-timing Electronic Control) V6 isn’t the most powerful in its class (although there aren’t many left that offer six-cylinder performance so it’s a step ahead of most), but it nevertheless adds 58 horsepower and 53 lb-ft of torque to an SUV that weighs only slightly more, the complete numbers being 224 units of thrust at 6,250 rpm and 215 lb-ft of twist at only 3,750 rpm, a differentiator that not only adds to your daily dose of performance but also increases the Outlander’s towing capacity from 680 kilos (1,500 lbs) to 1,587 kilograms (3,500 lbs), and max trailer tongue load from 68 kg (150 lbs) to 159 kg (350 lbs).

Another positive is a rather shallow ongoing dent in your wallet, the V6 only increasing fuel consumption from 9.7 L/100km in the city, 8.1 on the highway and 9.0 combined with the four-cylinder and AWD to 11.9 city, 8.5 highway and 10.4 combined, while premium unleaded is now recommended for maximum performance yet not required.

The engine pulls nicely and transmission snaps through gear changes quickly, prodded via nice big rally-style magnesium paddles for even more driver engagement, so it’s not too difficult to quickly get past posted speeds and into costly territory. A good thing its four-wheel discs are good at scrubbing off speed quickly, and at least as importantly that the Outlander’s fully independent suspension can handle the forward weight shift when doing so. It handles lateral forces just as well and much better than most challengers, the spirit of Evo trickling down (or rather now haunting, RIP) through most of Mitsu’s offerings. Its MacPherson strut front and multi-link rear setup isn’t anything new for the compact SUV segment, but the way Mitsubishi goes about tuning it is masterful, the Outlander’s ability to effortlessly snake through serpentine two-laners even when the pavement underneath is far less than ideal a real delight. Of course, such agility can help avoid potential accidents too, the S-AWC all-wheel drive system going far to aid the suspension’s ability, especially in inclement weather. You’d think that such handling chops would result in a punishing ride, but the exact opposite is true with the Outlander delivering nothing but comfort over those same rough roads and an even more sublime ride on smoother suburban streets.

Incidentally, AWC was first offered in the 2001 Lancer Evolution VII, although for the Outlander its capability is not quite as all encompassing. Basically it combines Mitsu’s electronically controlled four-wheel drive system with active skid and traction control, allowing a torque vectoring effect that can really be felt. There’s a large circular button on the lower console that reads “S-AWC” yet doesn’t actually switch on the automatic system as one might think. Rather, it swaps between drive modes, the GT’s including Four-Wheel Lock mode to get you out of deeper snow, sand, or any other obstacle that could otherwise get you stuck, Snow mode, AWC Eco, and Normal mode. That said there is no Sport mode, which I found odd considering all the money spent on paddle shifters. Then again the GT felt like it was in Sport mode when left to its own devices in default mode anyway, so I can’t complain.

Along with its smile inducing performance the Outlander is a fabulous family mover and impressive load hauler. As noted the third row was more spacious than expected, while you won’t get complaints from front or second-row passengers either. What’s more, you certainly won’t feel like anything is missing when time comes to load it up with cargo, although the standard 60/40 split-folding rear seatbacks aren’t the most convenient to stow away. First you need to walk around to each side door and flip the lower cushions upward and forward before dropping the seatbacks down, but believe me the result is worth your time and effort. Those seats fold completely flat which makes for a huge cargo compartment, the net result being 1,792 litres (63.3 cubic feet) of maximum gear-toting space. With the second row sitting upright the Outlander is still quite accommodating at 968 litres (34.2 cubic feet), and then when the third row is in use you’re still left with 292 litres (10.3 cubic feet) of capacity, which is mighty impressive for a compact crossover SUV.

Some more positives I’d like to leave you with include the highest possible Top Safety Pick + rating from the IIHS when its optional active safety equipment is included, these items specific to this GT S-AWC model, although lower trims still manage four stars out of five in NHTSA crash tests. Additionally, Mitsubishi gets an above average reliability rating from J.D. Power and Associate’s 2015 Vehicle Dependability Study.

This is the perfect segue to Mitsubishi’s industry-leading warranty at 10 years or 150,000 km for the powertrain and five years or 100,000 km for comprehensive “bumper-to-bumper” coverage. Feel free to price out optional warranty coverage when at a competing brand to see how much coverage you’d otherwise be getting at no extra charge with Mitsubishi.

Brand detractors will quickly point out that Mitsubishi needs to give away more to attract buyers as it’s hurting in sales, and to that I say, “And your point is?” Yes, it’s a bit dumbfounding to think the Outlander is dead last in popularity when considering all that’s on offer and just how good it is, but such is the challenge of getting noticed in a world dominated by Ford Escapes, Toyota RAV4s and Honda CR-Vs. These are all excellent compact crossovers, by the way, but none is particularly better than this Outlander GT S-AWC. Drive these three and then the Outlander, after which I think you’ll appreciate my point of view. It’s a superb little CUV that deserves a great deal more respect than it gets.
©(Copyright Canadian Auto Press)
Car Shopping Tools