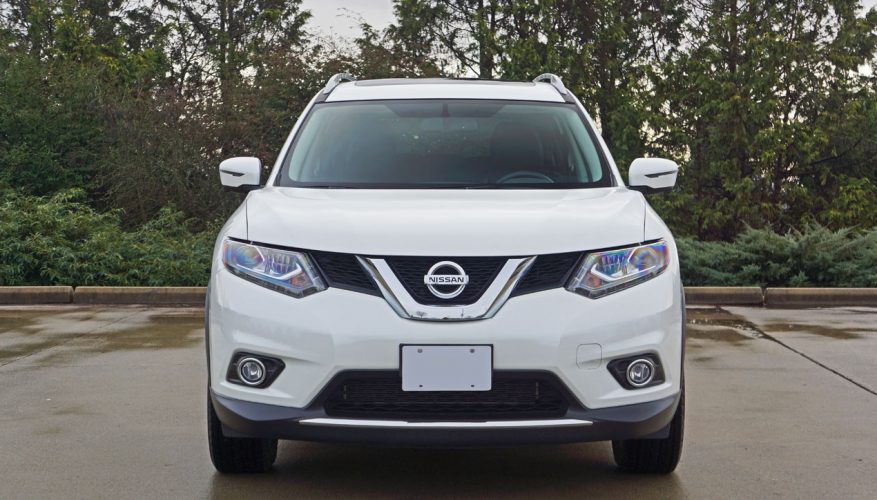 By: Trevor Hofmann
Hard to believe but the attractive Rogue is now the conservative one in the Nissan family, although it’s easy to see why this compact SUV has become so popular. Ubiquity may have made it too common to turn heads, the Rogue’s 35,841 Canadian unit sales during 2015 placing it fourth out of 13 compact SUVs on offer, and extremely close to stealing third from Honda’s CR-V, but it’s still especially sharp in my tester’s optional Pearl White paint scheme, lighter hues making the sporty black body cladding stand out all the more.

My loaner came equipped in SL Premium AWD trim, which means that LED auto on/off headlights join the standard LED daytime running lights with fog lamps underneath pulled up from mid-grade trims, the otherwise white roof getting a shiny black patch across its mid-section that not so subtly hints at the panoramic glass sunroof appreciated from below, additional SL Premium exterior features including a few more chrome and aluminum-finish bits brightening key points and upgraded multi-spoke grey metallic 18-inch alloys adding a sporty touch. The mirror caps are body-colour and infused with LED turn signals plus approach lights that shine on the road below, but like the LED DRLs these powered and heatable side mirrors are standard, as are roof rails up top and splash guards down below.

You really notice the change wrought by SL Premium trim inside, where an already nicely designed and well built cabin is upgraded with an auto-dimming rearview mirror, dual-zone auto climate control, a seven-inch colour touchscreen infotainment system with a 360-degree Around View monitor, navigation, SiriusXM Traffic, and nine-speaker Bose audio with speed-sensitive volume and Radio Data System (RDS), plus a leather-wrapped multifunction steering wheel, leather-clad shift knob and leather upholstery. A powered liftgate gets added to its conveniences while an already well endowed safety kit is uprated with blind spot warning, lane departure warning, forward collision warning with moving object detection, and forward emergency braking, these earning the Rogue a Top Safety Pick from the IIHS when equipped. As already noted, AWD is standard with the SL, as is hill descent control. All this is available for $35,548 plus freight and dealer fees, which is thousands less than some similarly equipped competitors. This is reason enough for its popularity, although it doesn’t hurt that the base Rogue S FWD starts at just $24,948.

I mentioned that the Rogue is nicely designed and well built, but it also features some premium detailing that’s become de rigueur in the compact SUV class these days, although not offered by all. A soft touch dash top joins pliable synthetic door uppers, while just below are nicely padded leatherette armrests with French-stitched seams. The centre armrest isn’t so fancy, but gets finished in comfortable padded leatherette just the same, while the leather seats are well formed and thoroughly comfortable with perforated leather inserts that keep you cooler in summer. Satin-silver trim adorns the steering wheel spokes and switchgear, the vent surrounds on the dash, and console mounted gearshift lever surround, while the gearshift panel and the centre stack interface are covered in a glossy black plastic. A high-gloss carbon-fibre patterned grey inlay finishes off the trim ahead of the front passenger and down each door panel, looking very nice in the process. I wouldn’t say the Rogue is finished to as high a level as some others in the class, this being its third year of availability and more recently updated competitors having really upped their game, but it’s better than some and still impressively detailed and feature-filled.

Ahead of the driver is a large dual dial primary gauge package with chrome rings around each meter, while a large colour TFT multi-information display is well stocked with features. The infotainment system on the centre stack isn’t the largest in the industry or the highest in resolution, but it offers some features that make it quite special, including the aforementioned 360-degree rear camera that makes parking a breeze. The graphics are somewhat remedial, but the layout is quite simple and easy to understand, while two rows of quick prompt buttons give quick access to the functions needed. The navigation system’s mapping graphics were a little slow to adjust, but we found our way to where we wanted to go, which isn’t always the case.

The Bose audio system sounds great, with nice deep bass and bright highs, the perfect complement to Sugar by Maroon 5 or any other dance track. It’s good for other types of music too, from classical to jazz, new wave to ’90s grunge and other types of harder rock. You can plug in your personal devices via USB and aux ports plus a 12-volt power outlet located just above a rubberized tray ahead of the shifter on the lower console. Another 12-volt power outlet can be found in the centre storage bin, this being a two-tier unit that also features a rubberized tray.

The auto climate control interface is nicely laid out with a large LCD display and the benefit of two front zones, some of the Rogue’s competitors only offering single-zone auto HVAC in top trims. The front seat heaters are only two-way, however, and while they heat up quickly the highest temperature isn’t all that hot. Rear seat heaters were not available, but a very nice large panoramic sunroof was, something that’s not always on offer and much appreciated when included. It boasts a powered sunshade that fully encloses and insulates the glass roof, a best of both worlds’ scenario.

The rear seating area offers loads of legroom and comfortable seats with good lower back support, while a centre armrest folds down with two cupholders included. The seatbacks fold in the usual 60/40-configuration, providing a flat loading floor and ample space for gear, the numbers reading 1,112 litres (39.3 cubic feet) when the seats are upright and 1,982 litres (70 cubic feet) when lowered. Compare those figures and you’ll see the Rogue is actually larger than some others in the class, which really helps when it comes to people and cargo carrying capability, plus Nissan goes further to include an innovative standard cargo system dubbed Divide-N-Hide with a split movable/removable carpeted load floor that adds two-tier shelving when needed. I should also mention that a kid-only third row is available, this reducing rear cargo capacity to 266 litres (9.4 cubic feet), but certainly upping its usability if your family requires.

Out on the road the Rogue’s ride quality is quite good, with plenty of suspension travel to minimize intrusions from pavement irregularities. Still it’s a fairly firm setup, so it’s not like you’re floating along on a cloud. You’re going to feel bridge expansion joints, bumps and frost heaves, manhole covers and the like, but it’s not intrusive. The Rogue balances this ride comfort with fairly good handling too, again not the best in its class but certainly good enough for most peoples’ wants and needs, while highway stability is excellent.

Overall the Rogue’s straight-line performance is fairly strong, with plenty of pull off the line and decent passing power on the highway. Its mere 170 horsepower and 175 lb-ft of torque might have you thinking it’s not as quick as some rivals, but its relatively low as-tested 1,643-kilo (3,622-lb) curb weight makes up for any power deficiencies, while the efficient continuously variable transmission helps in this respect while aiding the Rogue’s impressive fuel economy that’s rated at 9.5 L/100km in the city and 7.4 on the highway as equipped with AWD, or 9.1 city and 7.1 highway with FWD.

The CVT delivers pseudo shifts too, although there is no manual mode offered at all. An electronic overdrive button located on the shift knob lets you drop a “gear” when needed, and there’s also a low gear that brings revs up quite a bit more. With Sport mode engaged revs are allowed to climb almost completely to redline before shifts rapidly occur, the process feeling a bit artificial but certainly quick. I’m not a big fan of CVT transmissions from a performance perspective, although if left to their own devices while driving at normal speeds there isn’t a smoother way to get around town or enjoy highway cruising.

To engage that just noted Sport mode you’ll need to reach over to the left lower panel, next to the left knee, which is rather awkward and odd. I’m the type of driver that switches between sport and eco modes often as it’s nice to have a little more performance when needed and save fuel when not, so this type of setup wasn’t to my liking as it required me to take my eyes fully off the road in order to locate, and that’s certainly not what I want to be doing amid a curving stretch of road, exactly when I’d rather be enjoying the benefits of such a system. What’s more, none of the buttons on the lower left side are illuminated, making them even harder to see while driving.

Of course, none of the competitors in the Rogue’s compact SUV class are perfect either, but if Nissan wants its sales to pass by the CR-V and likewise desires to keep the new Jeep Cherokee and soon to be redesigned Chevy Equinox far behind it’ll want to remedy its shortcomings in its next generation, although that model isn’t expected for another couple of years. Until then the Rogue offers a lot of capability in an efficient, well-equipped, good-looking package, a certain recipe for continued success.
©(Copyright Canadian Auto Press)
Car Shopping Tools