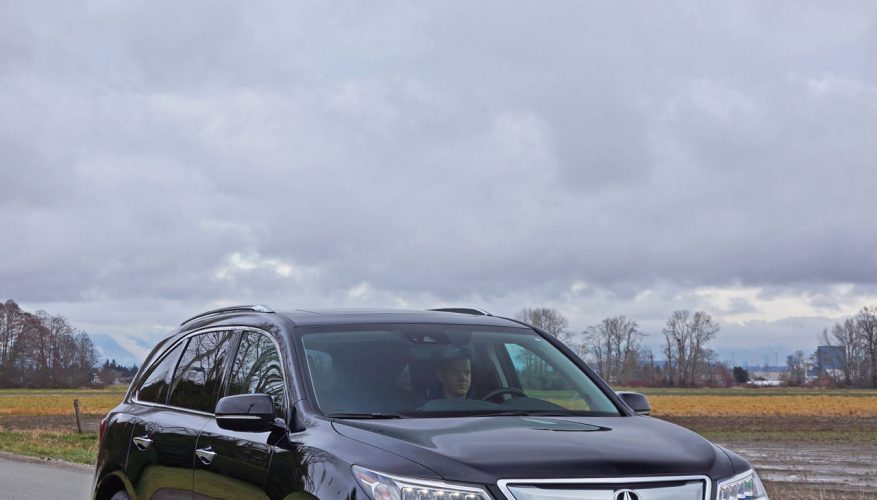 By: Trevor Hofmann
The MDX is a critically important model for Acura. It was the Japanese luxury brand’s second best selling Canadian model last year at 5,814 units, a number that made up almost 28 percent of Acura’s overall sales north of the 49th, while it’s also the brand’s real flagship model.

Sure Acura builds a near full-size sedan in the RLX as well as the mid-engine NSX supercar once again, but spotting either of these on the road is uncommon (impossible for the NSX as won’t even be out until spring) and therefore they do little for building brand image amongst the non-auto enthusiast crowd, which is responsible for the majority of sales. The once Canadian-made and now Lincoln, Alabama-built MDX, on the other hand, has been Acura’s brand-builder since it debuted way back in 2000.

At first glance the MDX appears unchanged for 2016, this third-generation version only arriving on the scene in 2013 as a 2014 model so it’s still relatively fresh. It wears Acura’s familial trapezoidal shield grille up front and centre, as well as the brand’s technologically advanced multi-element LED headlamps to each side, these now showing up across the entire lineup. It’s a handsome SUV from front to back, its familiar face offering up a certain prestigious respect to those in the know, the only 2016 visual change being a mildly reworked lower fascia that replaces two straight strike-through chromed slats with curving trim in order to make way for new circular fog lamps. It’s subtle, but the change adds a little more movement to the SUV’s frontal design, this metal brightwork followed around each side by thickly chromed side window trim that highlights a sporty greenhouse effectively hiding its rather upright rear portions. The MDX’ hind end is particularly fashionable with wraparound LED taillights that look fabulous at night, plus chrome-rimmed rear fogs that match additional bright metal detailing across the hatch. My tester’s understated 19-inch seven-spoke alloys only included chrome bolts and bright Acura branding at centre, but they rounded out the design nicely.

While still a fine looking CUV the nominal changes do little to inform would-be buyers about the big upgrades hidden within. You’ll need to peer through the window to see your first hint of its mechanical news, the old shift lever replaced by Acura’s new pushbutton and pull-tab actuated automatic. And it’s no slow-shifting six-speed autobox either, but rather a state-of-the-art nine-speed unit with optional auto start/stop to improve fuel economy and reduce emissions when the engine would otherwise be idling, while grippy standard Super Handling All-Wheel Drive (SH-AWD) incorporates an upgraded rear differential for even better at-the-limit handling. New driver assist and active safety features have been added too, but we’ll get to that in a moment.

Acura’s 24-valve, SOHC i-VTEC-enhanced 3.5-litre V6 is unchanged and still only adequately energetic for a vehicle that weighs 1,936 kilos (4,268 lbs) as tested, with 290 horsepower available at 6,200 rpm and just 267 lb-ft of torque from 4,500 rpm, but the nine-speed breathes new life into the old mill. Shifts are quick and often, allowing the engine to maintain its sweet spot when attempting to coax out max performance for quick takeoff or highway passing, especially enjoyable when Sport mode is engaged via the IDS controller on the same console-mounted transmission interface, with shifts easily executed via steering wheel paddles. Sport mode holds shifts longer, quickens throttle response, increases the steering “weight” and relays more torque to the outside rear wheels in corners for better turn-in, plus it even enhances the engine note, and while I chose this mode often, I went to default Comfort mode for tooling around town as it still provides good performance without all the excitement, and more importantly allows for better fuel economy, my Elite package equipped tester rated at 12.2 L/100km city, 9.1 highway and 10.7 combined thanks to its auto stop/start upgrade; the regular MDX is rated at 12.2 city, 9.1 highway and 10.7 combined.

No matter the drive mode the MDX offers up a wonderfully comfortable ride, it’s ample suspension travel allowing my tester’s 245/55R19 Michelin Latitude all-seasons to improve adhesion without adding harshness. Truly, it just glides over road imperfections as if they’re not even there and then has the ability to carve up a canyon road with size and weight defying precision.

Acura’s torque-vectoring SH-AWD is a big part of its surprising agility, the system upgraded with a new twin-clutch rear differential design that directs torque between front and rear wheels plus side to side for quicker, smoother operation through corners plus ultimately better traction, that along with the capable yet compliant suspension results in an exhilarating driving experience that’s so smooth passengers will be lulled to sleep in comfort, other than the kids that can be entertained via optional 9.0- or 16.2-inch widescreen displays that hang off the MDX’ roof.

There are two rows of roomy seats behind the impressively comfortable and spacious front seats, the second row near limousine-like when the 60/40 split bench is set to it’s rearmost position and, after simply pressing a button to gain easy access, the third row much easier to climb into and when seated, much more accommodating than some others in the class.

No matter where you’re sitting luxury abounds, and the quality of detailing is excellent. For instance, Acura covers the glove box door in soft padded synthetic whereas Audi, a brand that often gets attributed with class-leading interior quality, has been using hard plastic for the same surface in it’s Q7 up until that model’s most recent 2016 update. The MDX’ door panels are only soft touch on top mind you, plus the padded inserts and armrests of course. Acura finishes the dash top and the entire instrument panel in the nice pliable material too, other than the beautiful strip of open pore hardwood and brushed metal that highlights both sides. Separate wood and metal strips enhance the door panels while the nicest bit of this hardwood and metal kit can be found on the lower console where a sliding lid covers a deep and useful storage bin, a comfortable sliding armrest sitting behind plus a row of cupholders aligned to Acura’s unorthodox gear selector. The metal used in this area and throughout the rest of the cabin is some of the best you’ll find in this class, while the switchgear is also right up at the top of the premium sector.

The MDX’ graphic interfaces aren’t the largest or most advanced, but the rearview camera is superb thanks to a full 360-degree view of the surrounding area and extremely good clarity. Putting an address into the nav system was a bit more rudimentary than others, however. Rather than intuitively finding similar street names to choose from after entering a few letters, it requires a more time intensive letter-by-letter, step-by-step entry process, but once set it worked well.

Another time intensive process is setting the heatable front seat controls. Rather than merely offering a simple button or dial, Acura forces you to go into the infotainment system’s climate control panel and press the heated seat graphic that opens up a separate panel at which point you need to press another heated seat button three times in order to set its hottest temperature. This is a ridiculously long process, especially when compared to some others that not only include simple non-digital buttons but also enhance their convenience with auto settings that instantly provide a favourite setting as soon as you start up. On the positive, I like the process for turning on the heatable steering wheel a lot more, which is initiated via a simple button on the lower steering wheel spoke.

Practicality in mind, dropping the 50/50-split third row into the cargo floor is an extremely easy process. All that’s needed is a tug on a lever that’s easy to reach on the backside of each seat, which flips forward the headrest and lays the seatback completely flat in one fluid movement. Lowering the 60/40-split second-row seats requires a walk around to either side door, after which pulling a lever on the side of the lower cushion lays one side flat; repeat the process for the other side. It should be noted that others in the class, as well as the smaller compact luxury CUV segment, offer even more convenient powered second- and third-row seatbacks.

Additionally, a hidden compartment under the cargo floor is useful for quite a bit of extra storage. Another MDX bonus is a very well finished cargo area that includes heavy-duty carpeting on the backside of each seat, the sidewalls and the floor itself. Acura has also included high quality brushed metal cargo tie-down hoops and finished off the liftgate sill with brushed metal protector plates. The only problem with such pretty detailing is that these protector plates really need protection themselves, my tester’s severely scratched up after only 7,000 km, as was the back bumper unfortunately. Such is life with a family hauler, especially one painted black; darker colours making scrapes and scratches all the more noticeable.

Other features pulled up from the inadequately named Navigation package (there’s just so much more) include the 19-inch alloys described earlier, plus the aforementioned eight-inch infotainment system with navigation and hard drive media storage, as well as perimeter/approach puddle lights, rain-sensing wipers, AcuraLink phone connectivity, and humidity control air-filtration plus a sun position detection system for the tri-zone auto HVAC system. Additional Navigation package upgrades include blind spot monitoring with rear cross traffic assist and an upgraded audio system that comes pretty close to the one in my tester, while some standard MDX features worth noting include the heatable front seats I complained about and heatable steering wheel I lauded before, plus some useful tech such as pushbutton ignition, a colour TFT meter display, an auto-dimming rearview mirror, a multi-angle rearview camera with dynamic guidelines, and adaptive cruise control with a very effective low-speed following function.

These last two come as part of the AcuraWatch suite of sensing and driver-assist technologies I promised to explain in more detail later, that also include new road departure mitigation, lane departure warning, forward collision warning, lane keeping assist, and collision mitigation braking with pedestrian detection, all of this earning all MDX trims the IIHS best Top Safety Pick + rating along with an NHTSA five-star crash test rating.

It’s not the least expensive seven-passenger premium mid-size crossover on the market, but it’s one of the best. Really, compare the MDX to any competitor and it shines in each and every respect, except maybe all-out power. Still, its powertrain is more than adequate and wonderfully smooth, its ride and handling combination sublime, interior refinement superb, safety grade an A+, and all-round goodness second to none. I recommend the MDX highly.
©(Copyright Canadian Auto Press)
Car Shopping Tools