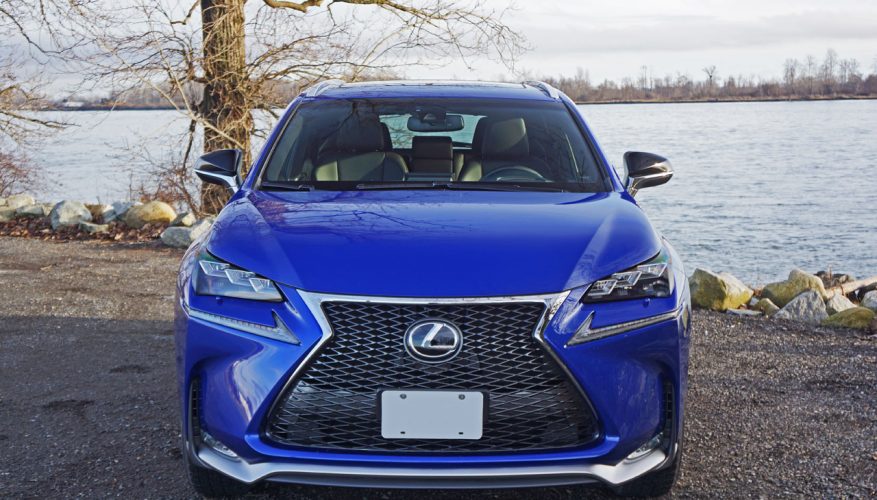 By: Trevor Hofmann
Well into its second season the new Lexus NX continues to strike a fashionable pose, pulling eyeballs from its key competitors onto its large, gaping, spindle grille and sharply chiseled bodywork, a dramatic styling statement if there ever was one.

Lexus is no longer a wallflower brand, the NX proof positive that things have changed in Nagoya. It seems with each new model the Japanese luxury brand grows braver, this Nobuyuki Tomatsu-penned design bolder than the IS sport sedan that came before and RC sport coupe that arrived alongside, or maybe it just seems that way due to the normally conservative compact luxury SUV segment it sells into. Still, the experiment is working, the NX only arriving in November of 2014 yet already rising to the top three in its class after its first full year.

The NX found 6,127 Canadian buyers in calendar year 2015, only upstaged by Acura’s RDX at 7,380 units and the perennial bestselling Audi Q5 at 8,203. On its way upward it passed by Mercedes’ now discontinued GLK at 5,304 sales, BMW’s X3 at 4,527 deliveries, fellow newcomer Lincoln MKC at 2,970 units, the Infiniti QX50 at 2,283, Porsche Macan at 2,121, Volvo XC60 at 1,646, and brand new Land Rover Discovery that arrived halfway through the year in May with 991 sales. That’s pretty lofty company to be trouncing, and it doesn’t appear to have been at the expense of the ever-popular mid-size RX. That larger model lost ground during 2015, mind you, by 10.7 percent, but the downward turn wasn’t an anomaly in its larger class (the Acura MDX and BMW X5 sales also fell) and the RX was in the final year of its previous generation so a slight slide in sales was expected.

That spindle grille makes the NX stand out from the crowd, finally giving Lexus a wholly unique design language that can’t be mistaken for anything else in the luxury sector or below. It’s also helped to raise Lexus from once Tier 2 luxury status to a fully-fledged Tier 1 brand, the Japanese premium division checking off all the boxes for such entry including a near full range of models topped off by an image-enhancing V8-powered full-size flagship sedan (that it’s had since day one), unique performance models (the limited run LF supercar helped in this regard although the upcoming LC will further boost Lexus’ brand status), a separate performance sub-brand (F) and of course high-end standalone dealerships (Cadillac and Lincoln will never attract the same premium clientele as the others if they keep selling Chevy Sparks and Ford Fiestas beside their CT6s and Continentals), while strong sales are the final ingredient to Tier 1 acceptance, Lexus fourth in Canada behind Mercedes, BMW and Audi, and third in the U.S. ahead of the four-ringed German brand. Success breeds success, after all.

Lexus and its new NX are winners in my books. I lauded the 2015 NX 200t F Sport AWD in my review last winter and was once again wowed by the 2016 NX 300h tested in the fall, although these weren’t as sharp as this most recent 2016 NX 200t F Sport AWD thanks to its fabulous Ultrasonic Blue Mica paint and neither was as well outfitted due to this model’s new top-level F Sport Series 3 trim level. What this new upgraded trim level means is that fans of all the cool F Sport styling and performance enhancements can also get most of the luxury and convenience options previously only available in Executive trim. In other words, it’s now possible to have your cake and eat it too.

Along with all this luxury kit the NX’ edgy styling continues into the cabin, while materials quality plus fit and finish are better than the class average. The dash top and door uppers get a stylish contrast-stitched leatherette surfacing treatment that includes a separate raised portion atop the primary instrument hood ahead of the driver that’s really a cover for shielding the head-up display unit, while a softer padded leatherette bolster sits ahead of the front passenger. The latter features an even richer looking complex seam that folds two solid pieces of leatherette over a patterned perforated piece underneath, complete with yet more contrast stitching. It’s such detail that causes one to take pause, and realize how much effort has gone into creating this truly special CUV. This isn’t the end of the NX’s padded pliable synthetics by a long shot, or the contrast stitching. The armrests get the white thread treatment too, as do both sides of the lower console that are also nicely padded to protect knees while looking better than any of the Germans. The stitching continues over the little palm rest that sits next to the aforementioned remote touch interface, not to mention the tiny little tab for lifting the lid just behind, which is actually a small makeup mirror overtop a micro storage bin when flipped over. I could go on with all the other niceties around the upscale cabin, such as beautiful textured metal inlays across the instrument panel and doors, LED overhead lamps and ambient lights elsewhere, and some of the best primary instruments and graphic interfaces in the industry, but I’ll mostly leave this to your personal discovery.

The NX is a compact, but it’s plenty roomy up front and in its second row, while those sport seats mentioned earlier are wonderfully comfortable plus provide great lower back support and reasonably good bolstering to hold your backside in place during hard cornering. Their power adjustment is fairly simple, with fore and aft plus up and down covered, as well as recline and lumbar support, but the latter is only two-way so it’ll either press your lower back in the appropriate spot or not. The rear seats are wide enough for three adults and all will enjoy excellent legroom and good headroom. With two abreast in back there’s plenty of hip and shoulder room too, plus the benefit of a folding rear centre armrest incorporating two cupholders.

A powered liftgate accesses a nicely finished cargo compartment featuring a stylish stainless steel protector plate and a chrome enhanced rear bumper protector. Additionally, there are six chromed tie-down hooks and plush carpets all-round, as well as a foldable hard-shell cover to hide valuables. My tester included a cargo net that comes in a zippered vinyl bag, tidying things up when not in use, whereas the cargo floor was shielded by a nice carpeted mat adorned with an embroidered Lexus logo and name. Luggage space behind the standard 60/40 split-folding rear seatbacks measures 500 litres (17.6 cubic feet) and expands to a maximum of 1,545 litres (54.5 cubic feet) when folded flat, which should be ample for most active lifestyle requirements.

The NX’ practical attributes aren’t unusual in this class, its overall dimensions about average inside and out while it actually drops the ball when it comes to convenient rear cargo area release handles for lowering the rear seatbacks; most missing this feature too. After styling it’s the model’s overall driving dynamics that set it apart, however, the NX F Sport one of the best vehicles in its class at balancing a comfortable ride with good handling. Its fully independent suspension consists of MacPherson struts up front and double wishbones in back, plus stabilizer bars at both ends, whereas the F Sport’s adaptive variable suspension improves steering response and feedback while simultaneously firming up the ride to minimize body lean. Lexus has increased damping force from nine stages in previous versions of the system to 30 stages in the NX, while the suspension responds four times faster since the technology’s inception, from 80 to 20 milliseconds. AVS can be switched between Normal and Sport/S+ modes, the former optimizing ride quality and the latter prioritizing performance.

It’s all controllable via Lexus’ rotating Drive Mode Select dial on the front portion of lower console where it rises up to become the centre stack, Normal mode found by pressing the knob, Sport by turning it to the right and an even sharper tuned S+ mode by giving it another rightward twist. Eco mode requires a single left turn no matter the mode you’re in, something I appreciated as it gave me control to switch between sportier modes when requiring extra power and then flicking it back into Eco mode when not needed, as the latter helps to reduce fuel consumption and emissions.

When spun to its rightmost position the NX 200t F Sport delivered quicker turn-in and a solid, planted feel on the road, the SUV taking to curving and undulating roadways with a similar level of self-assured confidence to its German peers, while it remained thoroughly comfortable throughout the process, even on bumpier road surfaces. Pushed a little harder and my tester’s meaty 225/60R18 Bridgestone Blizzaks continued to dig deep into the tarmac via the NX’ standard all-wheel drive, providing seemingly unflappable stability, the NX F Sport an engaging CUV no matter the road or conditions, and all the while you can check just how much grip it’s generating via a moving “G-ball” displayed within the instrument panel’s multi-information system. The Lexus-first G-Monitor uses similar tech as your smartphone to measure lateral and longitudinal forces, while display bars show steering angle, throttle opening angle and hydraulic brake pressure. Additionally, another Lexus-first is a turbo-boost gauge.

The NX’ six-speed automatic might not be the most advanced of its type on the market, but it gets a manual mode to enhance performance and paddle shifters on the steering wheel. You can also use these paddles to short-shift the transmission, saving fuel, although it does a good job of this on its own if switched to Eco mode where it is claimed to provide a five-cycle EnerGuide rating of 10.8 L/100km city, 8.8 highway and 9.9 combined, which is excellent until you start comparing it to the electrified NX 300h that’s good for 7.1 city, 7.7 highway and 7.4 combined, but the 200t F Sport’s 2.0-litre turbocharged four delivers 235 horsepower compared to the Atkinson-cycle 2.5-litre hybrid’s 194 net system horsepower, which combines with the more convention model’s 258 lb-ft of torque to get it moving quicker off the line and faster on the highway where it provides better passing performance. Different strokes for different folks, as the saying goes, and Lexus is one of few automakers to provide a hybrid model in this practical yet luxurious class, let alone such a dynamic non-HEV offering.

When equipped like my tester it’s also one of the few vehicles in its class to earn the IIHS’ Top Safety Pick + rating plus a five-star crash test rating from the NHTSA, while the NX is tied for third in J.D. Power’s 2015 Initial Quality Study and the Lexus brand scored in this survey’s top 10 along with Toyota, its parent brand. The NX is too young to be rated in the same third-party analytical firm’s 2015 Vehicle Dependability Study that goes back three years to determine overall reliability, but the Lexus brand is number one in this survey with only 89 problems per 100 vehicles (the next best brand is rated at 110 problems per 100 vehicles whereas the worst offender has a deplorable 273 rating).

The 2016 Lexus NX is a reliable, safe, luxurious, sporty and stylish bet that starts at just $42,150 plus freight and dealer fees for the base NX 200t and rises up to $54,400 as tested. That’s similar pricing to a fully loaded four-cylinder Audi Q5, although Lexus includes more high-tech features and some nicer finishings inside, while it’s thousands less than a BMW X3 or Mercedes GLC with similar equipment. No wonder it’s selling so well. As word about its many attributes gets out expect 2016 to be another strong year for the new NX.
©(Copyright Canadian Auto Press)
Car Shopping Tools