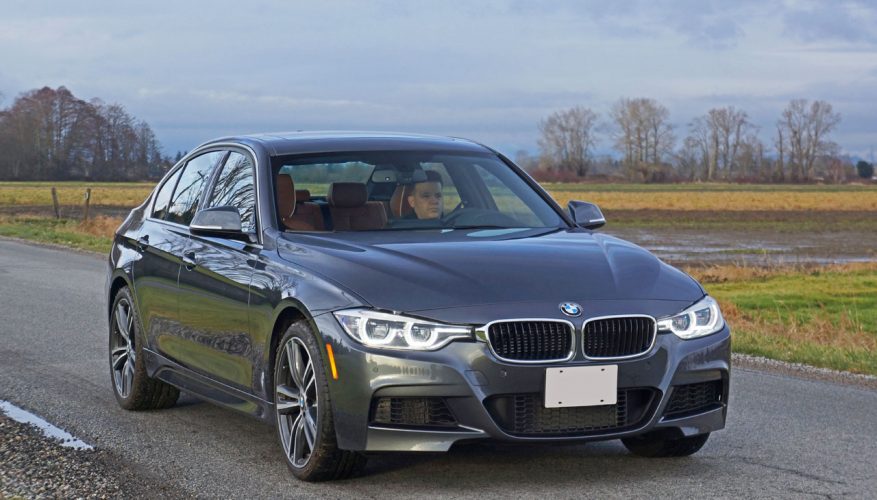 By: Trevor Hofmann
I’ve always liked the BMW 3 Series, a lot. Most driving enthusiasts do. I’ve even owned a couple, putting my money where my mouth is, so to speak. Therefore let me be the first to tell you that the new 2016 340i is easily the best non-M3 3 Series ever created. In fact, it’d be a toss-up as to whether I’d purchase this 340 or an M3. Don’t get me wrong. The M3 is brilliant in almost every measure, but the 340i may very well be the perfect sport sedan, delivering ample power and exemplary handling capability in a more refined, sophisticated way.

It’s certainly more understated from a styling perspective, albeit busier than a regular 3 Series. Its front lower fascia looks more aggressive thanks to the M Aerodynamics package that comes standard in 340i guise. Even the stunning machine-finished 19-inch twinned five-spoke alloys with grey-painted pockets are standard, although the M Sport brakes with blue-painted calipers poking out from within are upgraded via the optional M Performance package. Its styling enhancements around back are once again stock, however, with an edgier bumper cap framing two fat chromed exhaust tips. Again, the 340 looks nowhere near as outrageously intense as an M3, but it’s certainly a nicely balanced bit of assertive elegance.

BMW continues balancing sport and luxury inside, my particular example finished in sharp looking camel brown leather upholstery with classy ivory piping and contrast stitching. The detailing on the seats is beautiful, with mostly solid full grain leather surrounding strips of embossed diamond-patterned hides for a nicely textured look. The unique leather treatment fills the door inserts too, complementing the solid leather armrests as nicely as it does the seats. The quality of the leather is superb, and the seats, front and back, are some of the most comfortable and supportive in the business.

Along with the beautiful two-tone motif, BMW added dark grey-finished hardwood inlays across the instrument panel, each door panel, and atop the lower centre console, these trimmed with beautiful strips of satin-silver aluminum. Yet more aluminum dresses up the three-spoke M Sport steering wheel, the detailing around the shifter, the shifter itself, and elsewhere. Additionally, the roof pillars and roofliner are trimmed out in a black woven fabric for a sportier feeling cockpit than the usual beige.

Along with these styling enhancements the 3 Series gets the expected high-quality soft touch surfaces we’ve all become accustomed to, including a full soft synthetic dash top, a soft touch instrument panel that flows right down below the knees and even encompasses the glove box lid, plus soft-touch door panels from the very top to lower extremities. The only surface that isn’t soft touch is the lower console, although BMW has increased the quality and density of the hard plastic used.

As with all BMWs the 3’s switchgear is excellent, from the minimalist dials on the steering wheel spokes and simple layout of the HVAC controls on the centre stack to the rotating iDrive controller atop the lower console, not to mention the power window switches on each door and heatable seat switches on the back of the front console. It’s all impressive hardware.

The newest primary gauge package is a wonderful mix of analog dials and digital background, the dials seeming to float within the high-resolution colour LCD TFT screen behind. There’s no noticeable change to the dash top infotainment display, its graphics still superb and resolution as crystal clear as anything in its class, while the iDrive system is easier to use than it’s ever been and as fully featured.

That sport steering wheel I mentioned a moment ago is wonderful; with ultra-slim spokes yet a thick, meaty rim that includes thumb spats for getting a good grip at the 9 and 3 o’clock positions. A set of sizable paddles are within easy reach and helpful for transforming the eight-speed automatic from silky smooth cog swapper into a blisteringly quick performance gearbox. Simply press the rocker switch next to the shifter upwards for Sport mode or another notch forward for Sport Plus, which turns off the traction and stability control, and you’re literally away to the races. This enhances throttle and shift response while allowing the transmission to rev higher between intervals, the process also enhancing steering reaction. If saving fuel and reduce emissions take priority, flick it downwards past Comfort to Eco Pro at which point it’ll optimize the entire car via BMW’s EfficientDynamics technologies.

For instance, the 3’s standard auto start/stop will shut the engine down at stoplights and then immediately bring it back to life as you remove your foot from the brake pedal, while those brakes will transfer otherwise wasted kinetic energy to the electrical system so as to limit drain from the 3’s ancillary systems. It all reduces gas consumption, while slightly retarded throttle response and shorter shifts do their part to limit the use of pricey premium fuel. With such systems in operation the as-tested 340i xDrive is good for a five-cycle EnerGuide claimed 9.3 L/100km combined for the standard six-speed manual and 10.3 for the auto, impressive for such a powerful, performance-oriented sport-luxury sedan.

It really does drive brilliantly. The new engine still displaces 3.0 litres yet BMW, in its infinite wisdom, chose to rechristen it 340i rather than maintain the 335i designation that (for the time being) goes down in BMW lore, a strange move that will only make sense when you get behind the wheel. The all-new engine’s output is up considerably since last year’s 335i, from 300 horsepower to 320, while peak torque gets bumped from 300 lb-ft to 332 and is now available from 1,380 to 5,000 rpm. A mere 6.6 percent increase in thrust and 10.6 percent uptick in twist might not seem like much at first glance, but by the seat of the pants the new 340i feels totally rejuvenated, like taking off in a classic straight-six M3, while the engine makes particularly nice throaty noises all the way from idle to redline. Really, you can add this new mill to my favourite engines shortlist, while the paddle-shift actuated eight-speed autobox it comes mated to is a hyper-quick shifting masterpiece of modern tech, so smooth and efficient on one hand with such a ridiculously immediate reaction time on the other that you’ll be wondering if it’s a dual-clutch automated manual, other than its silky operation. All this despite the 2016 340i xDrive auto being 57 kilos (125 lbs) heavier than the 335i xDrive auto it replaces, at 1,733 kg (3,821 lbs), whereas the rear-drive version of the same model weighs the same at 1,676 kg (3,695 lbs).

It certainly doesn’t feel any heavier through corners, the updated 3 providing its usual compliant ride with even more entertaining handling than the outgoing model. There’s an effortlessness to the way it goes about managing circuitous roadways that’s almost underwhelming, with a need to exceed posted speeds in order to get the adrenaline going. I remember how much fun I had in my old E30 325, even at moderate speeds, that car nowhere near the luxury machine this new one is and weighing far less than today’s lightest 2 Series, although the newer model is required to fulfill today’s desire for a premium experience that rivals Rolls-Royce models of yore. I can’t complain as it suits my 50-something style to a T. I’m quite certain an E30 wouldn’t live up to my daily dose of comfort now, but this F30 certainly does and then some, while providing levels of grip, whether dry, wet, snowy or tracking over any other type of untoward road condition, that I couldn’t have imagined way back then.

Still, I can’t help but wonder how much more enjoyable this compact would be if it weighed half a ton less. Right now the 340i xDrive is only 138 kilos (304 lbs) lighter than a full-size Jaguar XJ AWD luxury sedan, although it weighs 17 kg (37 lbs) less than a similarly powered Audi S4. The significantly more powerful Mercedes-Benz C 450 AMG 4Matic hits the scales 43 kg (95 lbs) fitter, mind you. Can you imagine that? A competitive M-B that’s more athletic than a Bimmer?

Still, the way the 340i xDrive takes to the road silences my complaint, hightailing it to 100km/h in a mere 4.9 seconds with xDrive and 5.1 with rear-drive. While not quite as quick as the new car I liked last year’s 335i, although it felt a bit numb compared to 3s past. Not so with the 340i. BMW reworked the electric power steering for quicker response and better feel, while xDrive seems a bit more rear-wheel biased than the previous version. BMW recalibrated the eight-speed auto with wider spaced ratios as well, while the no-cost optional six-speed manual gets downshift rev matching for the first time. That you can even get the 3 with a manual anymore says a lot about BMW’s respect for this model’s hardcore enthusiast, let alone respect for the model’s legendary status as the ultimate sport sedan. You can only get the stick with the 340, mind you, although with either drivetrain, while rear-wheel drive is a 340i rear- or all-wheel drive exclusive too.

My 340i xDrive tester starts at $54,650 plus freight and dealer fees, which is $2,600 more than base price for the rear-drive 340i. Its Mineral Grey Metallic paint added $895, while that the M Performance package noted earlier added $1,900 onto the bottom line, along with variable sport steering and an adaptive M sport suspension to go along with the aforementioned upgraded brakes. The biggest expense was $6,500 paid out for the awkwardly named Premium Package Enhanced package that added proximity sensing keyless access, high-beam assist, auto-dimming side mirrors, speed limit info, BMW’s driving assistant, a head-up display unit, four-way powered front lumbar support, superb sounding Harmon/Kardon audio with satellite radio, rearview and surround-view cameras, front and rear parking sensors, active blind spot detection, a universal garage door opener, a powered rear sunshade and manual rear side sunshades, heatable rear seats, an alarm system, and BMW Connected Services that let you monitor your car from your smartphone.

It’s missing ventilated front seats, a panoramic sunroof and some other features offered with competitors, something BMW may want to address because for the first time ever its arch nemesis, the Mercedes’ C-Class stole the show with 9,992 sales through 2015, meaning that the 3 is no longer the bestselling premium compact in Canada. Last year its sales fell 4.9 percent from 10,086 units to 9,590, representing its worst results since 2005, and that’s after plummeting more than 19 percent the year before. In comparison C-Class sales were up more than 31 percent, although the year prior was pretty dismal. Of course, we need to factor in that there’s no longer a 3 Series Coupe or Convertible while Mercedes also sells a two-door coupe under the C-Class banner, and that the 4 Series Gran Coupe is probably cannibalizing some sales from the 3 (it would be my choice of the two), the 4 responsible for 4,942 sales last year and 3,469 the year before. The new 3 Series should help boost the model’s numbers, although its visual refresh was so microscopically nominal many would-be buyers might not realize it’s been changed so dramatically under the skin; hence the name change.

Word will soon get out about the new car’s enhanced dynamics, and believe me the 340i is well worth the price of admission. Dressed up like my tester, while coming close to being as accommodating as a 5 Series front to rear, its $65k price tag is justified, especially when factoring in the 3 Series’ higher than average resale value. Its worthy competitors are no longer merely biting at its heals, however, with the C now glancing backwards in its rearview mirror, so therefore only time will tell if this new 3 is what’s needed to win back the class-leading sales crown and bragging rights that go with it.

So far BMW is off to a good start with 507 3 Series sales in January 2016 compared to just 394 C-Class deliveries for M-B… it appears the race is once again on. My money is on BMW for the win.
©(Copyright Canadian Auto Press)
Car Shopping Tools