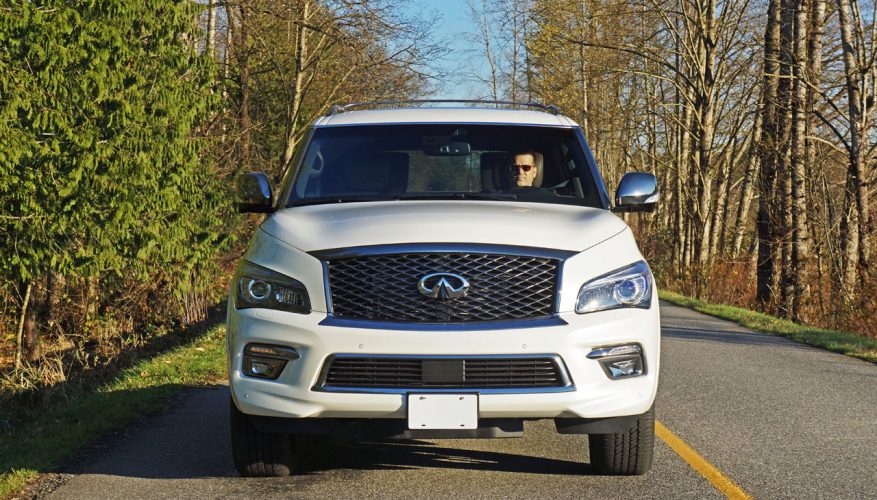 By: Trevor Hofmann
Talk about imposing. The QX80 makes a statement unlike any other SUV, or really any other vehicle on the road. It’s big, massive actually. But its rounded curves make it seem smaller than it actually is.

To put it in perspective, at 5,305 millimeters (208.8 inches) the QX80 is significantly longer than any other regular wheelbase luxury SUV on the market, only coming up short when compared to the long-wheelbase Cadillac Escalade ESV and Lincoln Navigator L models. Ditto for its 3,075-mm (121.0-inch) wheelbase, although you’ll need to add Land Rover’s Range Rover LWB to that list. As for width, its 2,031 mm (79.9 inches) straddles the middle ground, although at 1,925 mm (75.8 inches) high it’s one of the tallest in its big rig category. It’s no lightweight either, the big Infiniti weighing in at 2,671 kilos (5,888 lbs), which means it’s only lighter than the Lexus and two long-wheelbase domestics.

Fortunately it’s also endowed with a very potent 5.6-litre V8 capable of 400 horsepower and 413 lb-ft of torque, not the grandest numbers in this class but as far as base engines go it’s plenty powerful, while its seven-speed automatic is certainly state of the art kit, as fully geared as Mercedes’ G-Class, one cog ahead of the Navigator, and only one shy of the Escalade, Lexus LX and Range Rover. Off-road capable four-wheel drive is standard, as is expected in this serious SUV class, with a low range of gears and 4×4 heritage every bit as legendary as the full-size Land Cruiser that underpins the Lexus. Instead, Infiniti bases its QX80 on the all-continent conquering Nissan Patrol, a military-spec rock crawling, mud slinging off-road warrior that few are worthy of comparison. Of note, the QX80’s 234 mm (9.2 inches) of standard ground clearance is more than most of these competitors offer, so there won’t be many obstacles that will hang it up.

Of course, I’ll hazard to guess that most QX80s never leave pavement, this model more about status and style than any torturous trailblazing. The same goes for all the rest of the SUVs in this category, their makers having long learned that the real test these truck-like utes need to pass before causing their would-be owners to dish out anywhere from $75k-$220k is to overcome the inner-city jungle and open road, where they’re most often enlisted for shuttle service to and from school during weekdays and kids’ sporting events on weekends, plus the occasional vacation with trailer in tow.

A Class IV hitch comes standard as does its 3,855 kilograms (8,500 lbs) of towing capacity, satisfying those seasonal camping trips and more regular jaunts to the boat launch, while the QX80’s ride delivers the kind of soothingly compliant competence that only plenty of wheel travel can accommodate, the big ute fully capable of eliminating the sudden harshness of unexpected potholes and frost heaves let alone pavement grooves, uneven surfaces, bridge expansion joints and speed bumps. Loose gravel? It’s a joy and especially fun when the stability control tucks the SUV’s tail in just before it would otherwise spin into scary oversteer, modern-day technology an even greater friend to those who frequent the wild outdoors than merely battle rain, sleet, snow and other causes of slippery road conditions.

You might ask why I’d even consider hurling a near six-ton SUV through fast-paced corners, let alone roads that aren’t even paved, but that’s the best part of the QX80 story. Despite being one of the beefiest sport utes in existence with a great deal more 4x4ing experience than Range Rover would ever want you to know, this SUV handles like an Infiniti should. Truly, the way this largest of QX models manages high-speed twists and turns is jaw-dropping impressive, remaining flat and focused during quick 90-degree bends thanks to an adaptive hydraulic body motion control system that instantly adjusts the suspension to counteract shifting loads whether side-to-side or vertical, while it’s just as capable of tracking effortlessly when the adaptive cruise control with full-speed range is set to slightly higher than posted speeds on the freeway.

The QX80 is one of the only vehicles I’ve ever experienced that makes 22-inch rims look small, these being four of the reasons, along with its 275/50R22 Bridgestone Dueler all-season performance tires, why it sticks to any surface as well as it does. My Limited trim tester’s dark chromed 14-spoke rims looked fabulous, a perfect match for the largest version of Infiniti’s sculpted trademark grille to date and lower engine vent, both of which are also done out in darker chrome than usual, as is the trim within the jeweled LED headlamps to each side, shapely combo LED DRL/fog lamp surrounds just below, front fender engine vents around each corner, unique dark-chromed A-pillar caps and mirror housings, dazzling darkened brightwork door handles, rooftop side rails and cross members, LED taillight trim that features interesting squiggly individual vertical lenses that follow the scalloped lighting theme initiated by the once trend-setting QX70, as well as the rear license plate garnishes and liftgate bumper protector plate. If Infiniti had only given the same treatment to the side window trim it would’ve been dark-chrome all-round, but my top-line QX80 Limited looked pretty rich just the same.

Truly, the only more impressive vantage point than viewing any angle of this stately SUV’s exterior is seeing it from the inside; incredible. Stainless steel running boards with rubber grips and welcome lights below allow easier access to this tall SUV, and once up high looking inwards it’s easy to see Infiniti has all its bases covered. First off are the requisite soft touch pliable plastics found just about everywhere, albeit not on the glove box lid where Infiniti normally gets it right, but whatever. This is a go-anywhere SUV, and it’s probably the nicest finished truck-based sport utility this side of the $108k-plus base Range Rover. Even nicer, down each side of the centre stack, as well as the lower console sides, across the door panels, armrests and the seats themselves this Limited model gets beautiful padded high-grade Truffle brown semi-aniline leather (other colours are available), stitched with a quilted wavy pattern in key areas, the latter in brown thread while contrast light grey stitching gets used for the side seams. The inserts of the seats are perforated for ventilation, whereas grey piping surrounds the seats and centre armrest for a bespoke look, the seats, door panels and armrests visually matched by a Truffle brown leather rimmed steering wheel. Appearing even more custom-fit are slabs of genuine open-pore matte finished ash hardwood, some of the nicest I’ve ever seen in any vehicle, with clearly visible grain that’s also naturally textured. Overhead and down each roof pillar is the richness of ultra-suede, and no the price tag isn’t well into the six-figure bracket like most similarly equipped rivals, the majority not even close to matching the QX80 Limited’s wow factor.

The $75k-$220k price range noted earlier was the base QX80 to the almost loaded Range Rover, the entry-level Infiniti the best value in the segment and this top-line Limited version still well-priced at $92,800. Where it’s a bit weaker than some rivals is in its electronic interfaces, especially the primary gauge package that’s not a full-colour programmable TFT display, or even a partial one. Instead its electroluminescent instruments are bright, beautiful and plenty colourful, but the black and white multi-information display at centre is about as dated as the luxury sector gets. The infotainment system atop the centre stack is mostly up to par, however, with loads of features, excellent navigation mapping and bloodhound accuracy when en route to your destination, while its surround-view monitor is especially useful for keeping its bulky mass unscathed from untoward obstacles you might otherwise back into.

An additional attribute that’s not only well respected but expected amongst all Infiniti models is high-quality switchgear, the QX80’s some of the nicest offered in the luxury sector. The metal-edged rotating dial and surrounding buttons for that aforementioned infotainment system are most prominently displayed, but all of its buttons, knobs and toggles are a cut above, with absolutely perfect fit and finish, amazingly good damping, and out of the ballpark class and style. This is contrasted by a few details that aren’t quite up to Infiniti’s usual high standards, however, like the plastic lid over the 12-volt power outlet. Still, you’ll find the same shortcuts in an Escalade, Navigator, LX, G and the like, although I don’t remember any of these covering their door speaker grilles in premium leather. Infiniti does the same for the grab handles on its doors, while even its floor mats are impressive, with plush pile carpeting, brown edging, and thick metal Infiniti nameplates front and back.

Second-row seats in mind, they’re wonderfully comfortable like those up front, amply spacious, while my seven-occupant tester included a massive centre console where the optional eighth seat is available in base trim. Those outboard seats flip up and out of the way easily, allowing good access to the third row. On that note the back seat isn’t quite as accommodating as the ones just ahead, but I still had three inches left over above my head, albeit not so much in front of my knees. The second-row seats don’t slide back and forth either, so you probably shouldn’t plan on stuffing anyone much larger than my five-foot-eight medium-build frame in back for long durations. Just the same, those relegated to the not-so-cheap seats (they’re still very nice) will get more than enough ventilation thanks to single roof vents for each side of the third row and dual roof vents for second-row occupants, while second-row seat heaters can be accessed via the tri-zone advanced auto climate control system’s rear panel that’s fixed to the back of the front console; the advanced part being auto recirculation, plasmacluster air purification and a grape polyphenol filter.

As for stowage, Infiniti includes power-folding rear seats in Limited trim, although they ease into their nearly flat cargo-ready positions so slowly you might want to break out your half-finished game of Candy Crush while waiting, but at least they only require a finger’s push on a sidewall-mounted button to lower. As inferred they don’t fold completely flat, but they come close, and by doing so match the second-row seats when they’re completely lowered. The centre console sticks out above however, which would make it difficult to load in large building materials without damaging the beautifully detailed leather gracing its armrest/lid, but that said you’ve actually got enough room to lay in eight-foot planks of lumber if you’re willing to mess up the beautifully finished cargo hold. The actual numbers read 470 litres (16.6 cubic feet) behind the third row (which is equivalent volume to an average full-size sedan’s trunk), 1,405 litres (49.6 cubic feet) behind the second row, and a gargantuan 2,694 litres (95.1 cubic feet) when both rear rows are folded forward. Nice chrome tie-down hoops are fastened to the cargo compartment’s sidewalls, while Infiniti has added three large metal bumper protectors too, but I must say these are so nice that I’d be more worried about scratching them than the paint underneath.

While north of $90k is a lot to spend on any SUV, the QX80 Limited is far from average. The new Escalade impresses too, but the big QX will run rings around it when the road starts to wind and simultaneously deliver a smoother ride. The same goes for the recently redesigned Navigator, long-in-tooth LX, and so on, only the top-rung Range Rover standing out as the class leader its much loftier price tag suggests it should be. Still, my money would be on the QX80 Limited as it delivers a great deal more luxury than any competitor for the dollar figure asked, while its style, performance, off-road prowess, and overall utility make it more than good enough to compete in this rarified class. Don’t buy a full-size luxury ute without first driving a QX80 Limited, as I think you’ll drive away very impressed.
©(Copyright Canadian Auto Press)
Car Shopping Tools