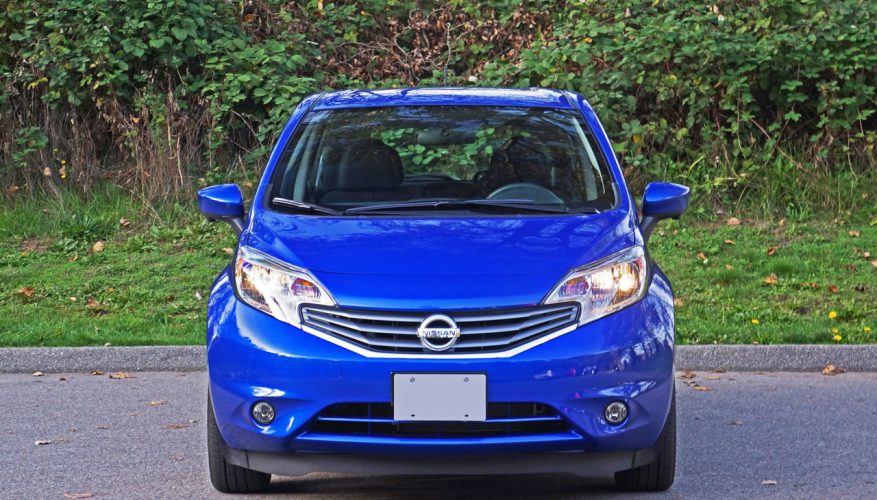 By: Trevor Hofmann
Nissan has a thing about offering the least expensive car in Canada. Right now it’s the Micra, a sub-$10k hatchback that not only looks good but also is brilliant fun to drive with its base manual gearbox. Before that, however, Canada’s cheapest new car buy was the Versa sedan, a good, reliable and roomy subcompact that could have been the poster car for the word dull. Nissan has come a long way with its small car style since then, the new Versa Note an altogether more appealing car.

The Versa Note effectively replaced the Versa Hatchback that was discontinued after the 2012 model year, although it didn’t arrive until later in 2013 as a 2014 model, the aforementioned Versa four-door having soldiering on to fill the gap. Despite being on the road for two years and now moving into its third model year the Note is still one of the better looking subcompact hatchbacks in Canada’s marketplace, my SL tester just a little bit nicer than average.

It gets an attractive grey-painted three-slat smiling grille with a thick chrome surround, its outer edges taking a chunk out of each multi-reflector halogen headlamp, these wrapping around and overtop the front fenders to almost their halfway point. A large lower grille opening featuring a single body-colour slat is bookended by sporty looking circular fogs, these ahead of a stylish set of V-style four-spoke alloys on 195/55R16 all-seasons. Nicely sculpted bodylines reach up toward cool but complex shaped wraparound taillights, all finished off with a clean, upright back end design.

Proximity sensing access gets you inside the SL, while a button on the dash starts the engine, lighting up one of the nicer primary gauge packages in the class. The blacks are pure black and whites dazzlingly white, with a semicircle tachometer on the left and a large speedometer in the middle, the latter filled with a cool display protruding out at centre, complete with a clock, mileage to empty readout, mileage meter, and average mileage indicator (showing a reasonable 6.9 L/100km), while the right semicircle gets filled with a gear indicator, digital odometer, exterior temp, and fuel gauge.

The Note SL offers other niceties too, including a leather-wrapped multifunction steering wheel with attractive metallic accents, that satin-silver trim also surrounding the centre stack, the base of shifter and the knob itself, while glossy piano black surfacing enhances the main centre stack panel. Nissan fits this top-line model with yet another impressive digital interface, this one being a large high-resolution colour infotainment display fitted with a bright and clear navigation system sitting right at centre stage, while a reverse camera included active guidelines that bent to show where the car would end up if you kept the steering wheel turned in a given direction, and even better there’s a 360-degree surround monitor displayed to the right. What’s more, the SL’s stereo is surprisingly good with deep resonant bass tones.

A simple three-dial HVAC system takes care of climate control, although the two-way heatable front seats do a good job of warming too, their cushions plenty supportive while the rears are as comfortable and spacious as any in the segment, especially for head, knee and legroom. Nissan even goes the extra mile with the SL’s fabric upholstery, the inserts covered in a stylish wavy blue on black design that’s enhanced with cool blue thread. It all looks great, and the roof height that provides the great headroom also makes for a sizable greenhouse that lends superb visibility all-round.

Where the Versa Note misses the mark is first, by not offering a telescopic steering column even in this top-line trim, tilt adjustment its only capability, and second, cabin refinement. Truly, there’s not a trace of soft touch surfacing anywhere. Even the armrests are done out in hard, uncomfortable plastic. Put it up against most peers that apply at least some pliable synthetic to the dash and door trim, and it comes up starkly short.

This could be said of performance too. Some of the Versa Note’s competitors offer four-cylinder engines that deliver a great deal more off the line scoot and highway passing power, endowing them with the ability to overcome large trucks with speed and safety, not to mention a great deal more enjoyment all-round, while still managing to provide comparable fuel economy. As it is the Versa Note’s direct-injected 1.6-litre four-cylinder with continuously variable valve timing on the intake and exhaust valves sounds like it’s got the mustard, but it only manages to push out 109 horsepower and 107 lb-ft of torque, which is, to be kind, on the conservative side, while if equipped with its optional Xtronic continuously variable transmission (CVT) makes for a rather bland, albeit efficient driving experience.

The Note handles fairly well, at least as reasonably as a tall, narrow, softly sprung hatchback can be expected to, but it’s no Micra, while even top-line trims are saddled with rear drum brakes that aren’t exactly performance oriented. Really, its forte is ride quality and comfort. I wouldn’t push it too hard, as the engine drones on annoyingly due to that CVT, while its overall response isn’t very rewarding anyway. Rather, it’s a good city car and relaxing highway cruiser, the latter enhanced by a fairly quiet cabin that benefits from a sandwiched acoustic glass windshield and double-sealed doors, all of the above providing the comfortable experienced just noted.

I think this, and its stellar fuel economy that’s rated at 7.5 L/100km city and 6.0 highway with the CVT or 8.6 city and 6.5 highway with its base five-speed manual, are reasons enough for its strong sales, although it’s amply practical too.

Open up its large hatch and you’ll find 532 litres (18.8 cubic feet) behind its 60/40 split rear seatbacks, while folding these flat increases cargo capacity to 1,084 litres (38.8 cubic feet), which means that it sits about mid-pack for overall luggage space yet should be more than enough for most peoples’ active lifestyles. What I like best about this cargo compartment is its nicely organized design. My tester came fitted with a multi-tier Divide-N-Hide cargo floor that, when in its upper position, allows for a totally flat loading area when those seatbacks are down, or when slotted into its lowest position it provides greater depth for taller cargo.

That adjustable cargo floor isn’t standard, and neither is a rear cargo cover, these being part of second-rung SV trim. Instead, the base S model, which starts at $14,498 plus freight and dealer fees, includes powered heatable side mirrors, Fine Vision electroluminescent gauges, tilt steering, air conditioning, Bluetooth hands-free phone connectivity, AM/FM/CD/MP3/WMA/AUX audio with RDS and speed-sensitive volume, plus more, while security and safety equipment include an immobilizer, front disc/rear drum brakes with ABS, electronic brake-force distribution and brake assist, traction and stability control, plus all the usual airbags. The CVT costs an additional $1,300.

The just-above-base SV might be the best bang for the buck as it starts at just $16,398 and along with the items already mentioned includes a full measure of upgrades such as remote entry for its powered locks, plus powered windows, upgraded primary gauges with a trip computer and outside temperature display, the leather-wrapped steering wheel, piano black trim and upgraded upholstery on the seats and door inserts mentioned earlier, six-way driver’s seat adjustment, a driver’s seat armrest, a soft-opening damped glove box lid, vanity mirrors, a 5.0-inch colour display audio system with an integrated rearview camera, a USB port, hands-free text messaging function, NissanConnect with Mobile Apps, Bluetooth streaming audio, satellite radio, and more, this latter bit of kit all part of last year’s Convenience package although now standard with the SV.

The $18,898 SR is the oddball in the range because it’s all show and even less go, being that Nissan goes quite far to give it some cool styling upgrades such as 16-inch alloys on 195/55 all-seasons, a sport grille and dark headlight treatment, sport front and rear fascias, extended side sills, fog lamps, LED turn signals integrated into the side mirror housings, and a rear rooftop spoiler on the outside, while the cabin gets a unique leather-wrapped sport steering wheel, upgraded pseudo-suede sport seat trim with orange accents and stitching, and a not particularly sporty but still nice rear centre armrest with integrated cupholders, but stupidly eliminates the possibility of getting this tuner-like model with a manual gearbox, instead making the CVT standard. Sorry Nissan, but that’s absurdly dumb, almost worthy of a coveted Darwin award.

Oddly you can’t get any Versa Note with a sunroof of any size, while auto HVAC and other features found on top-line competitors aren’t available either.

Frankly, Micra aside, Nissan’s small car strategy has me somewhat perplexed for the reasons noted and the inability to move upwards into a compact hatchback or anything remotely sporty; the Sentra is equally dull and its meager sales show it. The SR moniker, that’s misused here, previously meant something to performance fans, but now they’re merely two letters that denote styling enhancements, and SL doesn’t fully measure up to competitors’ subcompact and compact “luxury” offerings.

Still, the Versa Note, especially in SV trim, is a very good value proposition that should also provide low running costs, while Nissan is well respected for quality and dependability. It’s a nice looking little car too, and as noted very comfortable with loads of interior room, so it’s hardly without redeeming qualities. I’d certainly recommend it to those seeking comfortable, economical, reliable transportation, but those wanting a little zip, zig and zag to go along with their daily commute will want to stick with their Micra.
©(Copyright Canadian Auto Press)
Car Shopping Tools