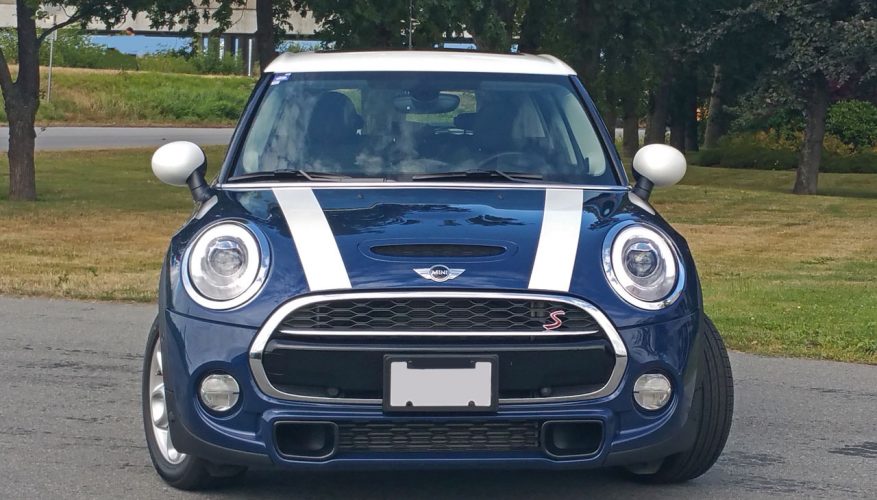 By: Trevor Hofmann
We see it all the time. A TV or online ad, an advertorial designed to look like a review while scrolling through social media on our phone or tablet, a full page spread in a lifestyle magazine or likewise for those who still read newspapers, a big screen while waiting for the train or smaller screen inside an elevator. However it gets fed to us it’s the same basic promotion by some brand trying to tell us that whatever they’re selling will make our lives better, improve our state of well being or health, enhance our sex lives and just generally make us happier people. In my experience most of these claims are simply not true, but when it comes to anything with the winged Mini badge on its hood and backside there just might be a case for truth in advertising.

Of course you’d need to buy into the belief that whatever makes us smile also improves our mental and physical health, that a fast, fun, cool, environmentally hip car could actually make us sexier, and that feeling really good at least a couple of times a day will inevitably make us happier. Call it Mini therapy, but after 13.5 years of covering Minis that included 18 personal reviews and many more acting as an engaged editor, plus yet another weeklong drive in a new 2016 model, this one pumped up with Cooper S performance and made more livable thanks to five doors instead of three (four on the side and one in back), I’ve done more than just drink the Kool-Aid. As if I didn’t already have a stupid grin of anticipation on my face when first seeing my test car’s Deep Blue metallic paint, white roof, white mirror caps and dual white hood stripes, Mini went and stuffed a six-speed manual between my tester’s sport seats to increase its fun factor yet more.

But hold on, it’s not all about good times. In fact the manual mixer transforms the Cooper S from a fun-loving sporty hatch into a much more serious performance model, with takeoff feeling quicker and all-round engine response more enthusiastic, the clutch take-up light yet providing ample push back and the shifter absolutely wonderful, with a short-throw flickable feel and positive notchy engagement combined with all the control that comes by modulating the three pedals below. At the opposite end of the go-fast spectrum the larger S’ brakes are great with nominal fade even when overused to the point of abuse, whereas handling is beyond brilliant, my S loaner’s 195/55R16s certainly grippy enough for heroic feats of lateral acceleration, although I’d love to try this car with a set of summer performance tires. Either way, its new UKL1 front-wheel drive platform architecture, which underpins all new and upcoming Mini models as well as a number of BMWs, does a better job of combining legendary Mini cornering prowess with ride comfort, the longer wheelbase providing better high-speed stability with less dive and squat too.

The heart of any new Cooper S’ is Mini’s recently updated twin-scroll turbocharged 2.0-litre four-cylinder, a full 400 cubic centimeters larger than the previous S mill and substantially more effective at getting up to speed. The engine puts 8 additional horsepower and 30 more pound feet of torque through the front wheels resulting in 189 of the former and 207 of the latter, while I likely don’t need to remind you that this subcompact hatch is hardly a heavyweight at 1,313 kilos (2,894 lbs) as-tested or 1,329 kg (2,930 lbs) with the six-speed autobox, which incidentally makes this 5-Door 61 kg (134 lbs) and 43 kg (95 lbs) heavier than the equivalent 3-Door models respectively.

There’s no hit on fuel economy between the 3- and 5-Door models, both Cooper S cars achieving the same five-cycle EnerGuide claimed rating of 10.0 L/100km city, 7.0 highway and 8.6 combined when fitted with the manual or 9.8 city, 7.0 highway and 8.2 with the automatic, which are impressive numbers when taking into account the car’s fabulous performance. Mini includes an engine start/stop system to shut off the engine while it would otherwise be idling, although I had it in Sport mode so much that I wouldn’t have realized it was there if it didn’t default to a more efficient driving mode each time it started up.

Mini includes a toggle switch to shut the auto start/stop system off if you’d rather keep it in Green mode to save fuel while still listening to the engine percolate at the stoplight, a switch that’s situated amid a whole row of toggles for everything from turning the traction control off to starting the car, the new “pushbutton” ignition system now a bright red toggle, which is much cooler in my books. Yes, it’s not only the Mini’s performance that will make you smile, it’s the artful touches, thoughtful conveniences and refined quality of the entire package. Mini likes to consider itself a premium brand, which makes sense considering it’s owned and produced in Britain by BMW. Yet it makes more sense after taking a seat inside and having a look and feel around. It’s a phenomenal interior, with fabric-wrapped roof pillars that are beautifully finished, the A-pillars on my tester interrupted by embedded tweeters that come as part of a superb sounding optional Harmon/Kardon audio system my test car happened to include.

To maintain that premium feel Mini finishes the dash top with a very high-quality soft-touch synthetic that continues down each side of the instrument panel, across all four door uppers, the door inserts and armrests, but not going so far as to cover the lower centre console, glove box lid, or lower door panels. Still, it’s a cut above most rivals and any previous Mini. Along with the high-grade pliable plastics are lots of shiny metals, painted or textured plastics and the like. A checkered pattern across the dash combined with black lacquered trim in my tester, while the reorganized gauges are black-faced to set it apart further from more common Minis that get less common white faces. The reorganization puts the speedometer and tachometer directly in front of the driver where it’s easiest to keep an eye on, freeing up the centre area for audio equipment or infotainment gear if added, although I admit to missing the ultra-cool speedo needle that spun around the circumference of the old centre-mounted infotainment display.

The Cooper S’ sport seats are expectedly supportive and wonderfully comfortable, although more on the firm side than cushy. That’s the way I happen to like it, mind you, while I especially appreciated how they hugged backside in place during hard cornering, their excellent bolstering more than adequate for aggressive maneuvers, while extendable lower cushions allow those with longer legs to get some additional support under the knees and hamstrings.

My tester also featured the Essentials package that adds front and rear fog lamps, heatable front seats and a panoramic sunroof for $1,300; the Loaded package with either dynamic dampers or a sport-tuned suspension (your choice, mine getting the latter), auto on/off headlights, proximity Comfort Access, an auto-dimming rearview mirror, rain-sensing wipers, dual-zone auto HVAC, and a front centre armrest for a very reasonable $1,200; the LED Lights package that changes those fog lamps to unique LEDs and adds LED headlamps (with adaptive cornering control for $250 extra), and white turn signals for $1,150 (Loaded package is prerequisite); the Wired Navigation package that adds navigation, a visual display within the circular centre "stack", MINI Connected apps, Bluetooth audio streaming and more for $1,500 (basically everything in the $800 Mini Connected package plus nav); a Visibility package that adds a rearview camera, a head-up display unit, and rear parking sonar for $1,300 (Nav package is prerequisite), and for $500 more Mini’s Park Assistant self-parking system; while that Deep Blue metallic paint mentioned at the beginning of this review costs an extra $590 and white hood stripes add $150; the white mirror caps and roof are no-cost options that replace the same in body-colour.

If you think that’s a lot of gear (and it is), Mini has much more available including its $1,400 autobox or alternatively that automatic in Sport guise with paddles for $1,650, more alloy wheel options than I’m willing to list, a JCW package for $3,000, leather upholstery for $1,000 (although the pleather is pretty convincing and even includes contrast stitching), an alarm system for $500, a universal garage door opener for $250, an electric front window defroster for $190, and so many other style and feature options and packages that it’s almost too difficult to decide; another sign of its premium status.

It all comes in a five-door body style that I happen to like a lot, the slightly abbreviated rear doors giving it an appropriately funky appearance yet more importantly utile backseat access. The S incorporates a beefier front valance than the base car with a large lower centre vent and big brake ducts at each side, plus circular fogs at each corner of the bumper when equipped. The hood scoop adds yet more aggression up front, while the rear bumper gets a black mesh insert with optional rear fogs and twin chrome tipped tailpipes at centre. Nothing new here, but it’s all nicely done.

If you hadn’t heard Mini’s 5-Door experiment appears to be paying off, as the brand recently announced that sales of models with four doors or more have surpassed those with three or less, probably expected but good for the brand’s ongoing fortunes just the same. As for me, I simply like the unorthodox styling of the 5-Door better, and of course prefer not having to squeeze my friends and family into the back via a coupe-like crevice. Likewise I like having the ability to take up to four additional friends along for the ride thanks to this model’s third rear seatbelt, and those in back are also more comfortable in the 5-Door thanks to 161 millimetres (about 6 inches) of extra length and 72 mm (2.8 inches) more wheelbase, all of the latter being added to rear legroom. There’s also 61 mm (2.4 inches) of extra rear elbowroom carved out of the interior door panels and 15 mm (0.6 inches) of added headroom. What that means in real life is that my medium-build five-foot-eight frame had about four inches remaining above my head and around the same in front of my knees when the front seats were set for someone my size, so you’ve probably got about eight inches of added height to play with. In other words, if your kids are taller than John Cleese you’d better consider the new six-door Mini Clubman or Mini’s Countryman SUV.

As you can tell, Mini is a changing brand for an evolving world, the vast majority of its new owners having very little in common with those that bought into the original Sir Alec Issigonis-designed version way back in the early ’60s. Then again, while the new Minis are much larger than the tiny original, the brand still adds an element of fun to everyday life that seems to be missing from so many other four-door hatchbacks. So the next time you see an ad for one of Mini’s new models, smile and appreciate that there really is some truth left in advertising. A little bit of money well spent really can buy happiness, to be enjoyed at least a couple of times a day.
©(Copyright Canadian Auto Press)
Car Shopping Tools