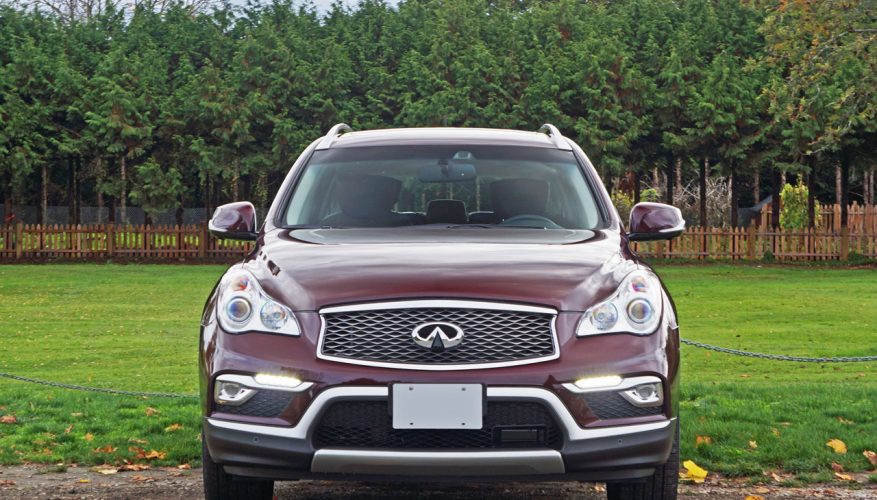 By: Trevor Hofmann
Like what you see? It’s the “new” QX50, which while implied as being new in the model’s latest ad campaign, is merely a very mild mid-cycle refresh behind its restyled front and rear clips, which also involved the North American adoption of a stretched version previously unavailable here. While we could beat up Infiniti for a lack of investment in this model that has only had minor changes over its eight-year lifecycle, or probably more accurately take a jab at Nissan for failing to adequately invest in Infiniti on the whole since inception of the luxury brand, something I chose to do in a review of the base QX50 written previously, we’d miss the more important point that this compact luxury ute was nevertheless an excellent vehicle before this remake and is now an even better one, available for superb value compared to most competitors.

It’s an impressive load of features for the compact luxury SUV class, but it’s made even more alluring because of the QX50’s cabin. For starters it was caramel mocha macchiato overload, or at least there were enough brown tones to make earthy folks and chocolate-caramel lovers feel right at home, and possibly quite hungry. Those who appreciate hardwoods should also feel comforted that this Infiniti remains grounded in tradition. A combination of bending maple veneer planks covers the centre stack and lower console, while all four doors get beautiful inlays as do the power window, lock and mirror control panels. On that note the QX50 continues Infiniti’s tradition of high-quality switchgear, the cabin filled with tightly fit, nicely damped buttons, knobs and toggles, some rubberized for easy grip while others get the textured metal treatment.

It’s all nice stuff, but where Infiniti blows the rest of the compact elite out of the water is in its application of soft touch materials. While I’ve never been a big fan of the creased dash pad ahead of the front passenger, its leather appearance made to look more obviously imitation in this caramel brown hue than the usual dark anthracite, the extremes Infiniti has gone to cover nearly every inch of the QX50’s cabin in high grade pliable plastic is impressive to say the least. All of the dash top and most of the instrument panel gets the soft-touch treatment, even including the glove box lid (not so for many competitors including Audi’s Q5), whereas the door panels are finished in the cushy synthetic right down to their lower extremities, even where the sun never shines between the bottom of the closed door and hidden doorsills. The last car I drove that went this far to pamper its occupants was a Rolls-Royce Ghost Series II, the QX50 likewise following the same front door detailing into the back seating area.

Back up front, the primary gauge package is simple and straightforward in layout, but beautiful in electrochromic execution with finely detailed white on black dials plus backlit purple-blue inner circles. Is this purple blue colour theme Infiniti’s homage to its once winning relationship with Red Bull? While this sponsorship deal has unfortunately ended, we hope to see the Infiniti badge back on a Formula 1 car in the future.

Over to the centre stack, the infotainment screen appears a bit smaller than en vogue these days, but I don’t mind, as the quality of its graphics and resolution is quite good, while its navigation system is excellent. Ditto for the Bose audio system, that delivers rich, deep bass tones and bright highs to make the most of any music genre.

Something sometimes overlooked by other premium brands, the QX50’s cargo compartment is finished to a higher grade than average, with rich carpeting, a robust retractable cargo cover with an aluminum cross member, a thick canvas tonneau and heavy chromed metal handle, plus the seatbacks fold via powered release buttons on either side of the cargo wall, dropping flat into place with one single fluid movement, a hard shell section automatically falling into place to cover the gap in between the seatbacks and cargo floor. Better yet, the rear seats power back up via a button on the lower console, positioned in between the rotating dials for the variable heatable front seats while straddling the Snow On/Off toggle, only needing a tug apiece to automatically rise into place. These would’ve been ideal when my back was out while picking up my youngest that usually has trouble raising the rear seats herself. Looking upwards, the only thing I can see that’s missing is a panoramic sunroof, the regular sunroof only taking care of front occupants and not allowing as airy an experience as large glass roofs permit. Then again, I’m sure that front occupants would like the option of cooling seat cushions, rear seat passengers would appreciate heatable outboard seats and no doubt Infiniti would love to have a four-cylinder variant of this SUV to compete more readily against the majority of rivals that offer more efficient, environmentally greener alternatives.

Most of the QX50’s competitors don’t offer anything anywhere near as powerful as this SUV’s base engine even in top-line trims, however, Infiniti’s compact challenger delivering 325 horsepower at 7,000 rpm and 267 lb-ft of torque at 5,200 rpm from a continuously variable valve timing and Variable Valve Event and Lift (VVEL) enhanced 24-valve, DOHC 3.7-litre V6, but that’s only part of the go-fast equation. The rest comes via the smooth yet speedy shifting close ratio seven-speed Jatco JR710E automatic gearbox with Adaptive Shift Control (ASC) and Drive Sport (DS) mode with Downshift Rev Matching (DRM), the latter a technology automatically synchronizing engine revs to a chosen lower gear in order to ideally mesh the two together, similar to how a performance driving professional blips the gas pedal while downshifting a manual shifter before a corner. All of this techno talk aside, the gist of it is that the engine’s growl ahead of the downshift will make you look and sound like said pro without necessarily having the skills to perform this action unaided, while at the same time the car will perform better.

It all would be moot if it weren’t for a capable chassis, and the QX50 shares its underpinnings with all of the best rear- and all-wheel drive Nissans and Infinitis out there; GT-R excluded that gets exclusive use of the automaker’s Premium Midship (PM) platform. The QX50 utilizes Nissan’s FM platform architecture shared with the current 370Z, Infiniti Q60 and QX70, as well as the old 350Z, G35 two and four door models, and M sedan. Nissan derived the FM abbreviation from the Front Midships positioning of the engine, which places the centre of mass aft of the front axle centerline, therefore shifting weight rearward which unloads the front suspension for freer steering. Depending on model the weight distribution is apportioned as close to 50:50 as possible for better balance, while the design also allows Infiniti’s engineers to push the wheels further out towards each corner to improve overall control. That’s a lot of background to back up one very important reality: unlike many of Infiniti’s competitors that base their compact SUVs on front-wheel biased economy cars, the QX50 is in an entirely different league and therefore takes to corners like a premium rear-wheel or all-wheel drive sport sedan.

Granted, a rather heavy sport sedan at 1,827 kilos (4,029 lbs) in base trim (I’m sure my fully loaded one weighed considerably more), but nevertheless it felt surprisingly nimble for such a long, substantive vehicle. I’m not going to say it’s as sporting as last year’s model, although despite adding 80 mm (3.2 inches) of wheelbase and 109 mm (4.3 inches) of overall length Infiniti claims only two kilos (four lbs) of weight gain from last year’s 1,829-kg (4,033-lb) QX50, but the change in feel might have more to do with its 15 mm (0.6 inches) of extra ride height, raising its centre of gravity although making it more capable when trudging through deep snow or mucky cottage roads. I’m going to guess most will like its slightly taller ride height better due to a visual edge in traffic, and truthfully the trade-off isn’t all that bad because the QX50 still feels more athletic than most in its class while delivering a nicer ride than its predecessor.

Either way, dig deep into the accelerator and the 3.7 roars to life with the most satisfying of sounds, the sprint to highway speeds seemingly instantaneous and requirement for its capable chassis critical. That’s when its rear-biased all-wheel drive architecture can really be felt, with absolute rock-solid stability during long sweeping corners and certain confident control when those curves tighten up. It’s a rewarding SUV to pitch into fast-paced turns, its overall responsiveness downright fun. Braking is strong too, while fade is shockingly nominal considering the heft that was repeatedly being hauled down from high speeds. How I would’ve loved a set of paddle shifters to make the most of the fabulous drivetrain, but unfortunately Infiniti doesn’t offer any in this SUV for some reason. Still, it’s hard to believe something so sporty can deliver so much interior roominess and utility.

The front seats are the same, or rather adequately spacious for most body types, but the additional 235 litres (8.3 cubic feet) of interior volume that resulted from the stretch allowed for 65 mm (2.5 inches) of extra legroom and therefore more space in back, while the cargo department increased by 76 litres (2.7 cubic feet) for a total of 526 litres (18.6 cubic feet) behind the 60/40-split rear seatback and 1,416 litres (50.0 cubic feet) when they’re folded flat. I’ve already mentioned what an easy process that is and how nicely finished its cargo compartment is, but such is par for the course in the entire QX50.

Really, the only weakness with this vehicle is its so-so fuel economy that’s five-cycle EnerGuide rated at 13.7 L/100km city, 9.7 highway and 11.9 combined, but you’ve really got to weigh the performance you’re getting for the dollar spent, which is a big bonus unless you’re trying to eke out as much mileage as possible.

The dollar spent for this particular SUV is up $10,185 due to all available options being added, but that still only brings its total to $48,085 before freight and dealer fees. Again, tally up one of the Germans after adding all of their options and you’ll find a much pricier alternative that likely doesn’t perform to the same level, and now with its stylish new front and rear designs, increased features, added spaciousness and other improvements the QX50 is as good looking and functional as it’s fun to drive.