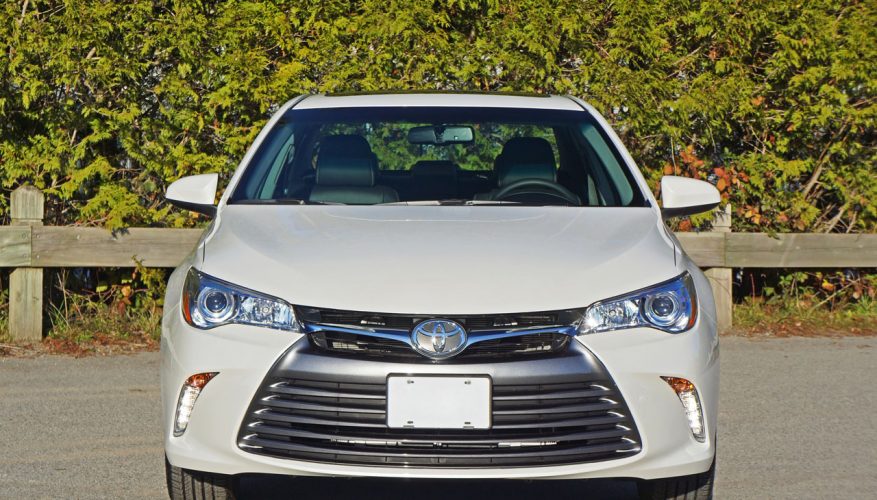 By: Trevor Hofmann
If current Camry sales are any indication, people really like the way the new model looks. After only 11 months it’s already passed last year’s final tally, and just like in the U.S. it’s the clear front-runner in the mid-size sedan segment. Unlike the U.S. however, where it’s dominated its category’s sales for years, calendar year 2015 will be the first 12 months that the Camry ends up on top of its segment sales chart since 2008, having previously lost out to the Ford Fusion, Honda Accord and even the Hyundai Sonata, therefore number one for 2015 will truly be something to celebrate.

Now moving into its second model year after its extensive mid-cycle update, it still looks fresh and unique. The new Camry’s deep front grille is almost aggressive in its visual assertiveness, my tester’s finished in an attractive glossy dark grey metallic other than the chromed Toyota trademark strikethrough at its top edge. The sharply angled combination halogen projector headlamps add a stylishly sporty touch while the forward-canted driving lights are my favourite design elements. Toyota forgoes turn signals on this model’s side mirror housings, but the side glass gets trimmed in metal brightwork, while 215/55R17 Bridgestone Turanza all-seasons wrap around an elegant yet sporty set of dark satin-silver finished V-style five-spoke alloys. A neat and tidy set of taillights finish off the rear design, understated compared to the more complex design previously used, these tied together with a slender chromed trunk garnish. A matte black diffuser-style valance finishes off the lower bumper, today’s Camry a long, lean sporty looking machine.

It continues that performance-oriented look inside, where Toyota has done out this XLE model with an attractive white stitching on black leather look. The seats are leather surfaced, the white thread edging each bolster and also curving to mimic the body’s backside before spanning the inserts in multiple ribs for a very stylish design that gets complemented by soft-touch pliable plastics and leatherette across the dash, dash pad ahead of the front passenger, door uppers, inserts, and more thickly padded armrests, the majority of which also gets the white contrast stitching front to back. This premium sport sedan styling is in sharp contrast to Camrys of the past that were more traditional in their attempts at luxury.

Then again, my XLE tester still employed faux woodgrain that’s made worse by being bonded to particularly cheap feeling plastic, but at least it’s a dark matte design that doesn’t scream “I’m a fraud!!” as guiltily as some others in this class do. My favourite interior styling detail is the satin-finish aluminum-look trim around the steering wheel spokes, edging the corner dash vents, surrounding the centre stack and lower console, plus the door panel detailing where it first covers the inside handles and then appears from within the door pulls before wrapping around the power window, locks and mirror switchgear.

These buttons and toggles are all nicely fitted and well damped, the way we expect it in a Toyota, the controls on the steering wheel spokes especially well done. Ditto for the centre stack, which gets nice large dials for audio on/volume and tune/scroll functions, plus the dual-zone auto HVAC system’s left and right side temperature knobs, the former doubling as an auto/fan off button and latter for syncing the two sides and A/C functions, both large enough to use with winter gloves. Down on the rearmost portion of the lower console, variable front seat heaters offer more adjustment than most rivals for yet another premium experience.

There are no such seat heaters in back, however, strangely not available despite this being such a trendy feature from compacts to top-tier luxury cars industry-wide, although the back seats themselves are extremely comfortable with very good lower support. There was about three inches of open space above my medium-build five-foot-eight frame, another three next to my outside shoulder and five to six inches ahead of my knees plus loads of foot space down below, whereas a centre armrest flips down to add comfort plus the convenience of two integrated cupholders.

The large 436-litre (15.4 cubic-foot) trunk benefits from 60/40 split-folding rear seatbacks, although the pass-through is a bit smaller than some others in this class, while Toyota has added a ribbed plastic backing that is designed to protect the seatbacks and no doubt would do so from a sharp object, but I like carpeting better as whatever you’re placing on top doesn’t slide around as much, while it also doesn’t scratch as easily from ski edges, poles and the like.

As you might have expected the drive is mostly about comfort, the Camry gliding down the road with an effortless ease, my loaner’s four-cylinder engine making hardly any noise at all unless trying to extract all of its 178 horsepower and 170 lb-ft of torque. That might not sound like a lot by today’s standards, but for a base powertrain the Camry’s 2.5 is quite good off the line while offering ample passing power on the highway. Such thoughts of engine output send me back to a then brand new 1987 second-generation V20 series Camry I drove from Vancouver to Victoria (much of which was atop the deck of the BC Ferries’ Queen of New Westminster taking in the gorgeous scenery) in the fall of 1986, and I was wowed by the shockingly stylish model’s impressive 135 horsepower; yes we’ve come a long way when it comes to family sedan performance.

That car was a wonderful vehicle to drive for its time, none of us realizing how incredibly successful it would become, nor the models that followed, and the rest of course is history. Odd to think back to these simpler times and then contemplate my only “complaint” about this car, that Toyota doesn’t offer rear seat heaters, especially when factoring in what now comes standard with the 2016 Camry, let alone optional. We couldn’t have imagined the Camry’s standard full-colour high-resolution 6.1-inch touchscreen display back in those days, or for that matter the concept of a backup camera system, Bluetooth wireless connectivity or plugging in our smartphones via USB.

How much everything has changed, but before I turn this review into a trip down memory lane for those of us with such memories (or the lack thereof) the $24,100 base Camry’s standard list continues with powered heatable side mirrors, remote powered locks and powered windows, automatic on/off headlamps, variable intermittent wipers, a sporty three-spoke steering wheel with tilt and telescopic adjustment and multifunction controls incorporating cruise, audio and phone functions, while standard items not yet mentioned include air conditioning, six-speaker AM/FM/CD/MP3/WMA audio with the items already mentioned as well as an aux plug, those 60/40 split seatbacks I noted earlier, ABS-enhanced four-wheel discs with electronic brake-force distribution and brake assist, traction and stability control, Smart Stop Technology (SST) that reduces engine power if the throttle and brake pedal are pressed simultaneously, front seatbelt pretensioners and force limiters, plus a total of 10 airbags including dual knee blockers up front and rear outboard side-impact bags in back, this list of standard safety kit possibly the most dramatic difference between today’s Camry and that model of yore. There’s yet more that comes standard, but you get the gist, this 2016 model is very well equipped.

XLE trim, which begins four trim levels the base LE, passing SE and XSE with a starting price of $31,040 when equipped with my tester’s four-cylinder or $34,800 with the 268 horsepower 3.5-litre V6, gets standard LED daytime running lights, unique 17-inch alloy wheels, proximity-sensing passive access, pushbutton ignition, an auto-dimming rearview mirror with a digital compass, an integrated garage door opener, dual-zone automatic climate control, a larger seven-inch infotainment system with navigation, satellite radio, a wireless charging pad located within the lidded storage bin at the base of the centre stack, an eight-way powered driver’s seat and four-way powered passenger seat, both of which are heatable and leather covered as noted earlier, plus a powered glass sunroof and active safety items like blind spot monitoring with rear cross traffic alert.

By the way, don’t look to Toyota’s website in an attempt to figure out what’s standard and what’s not, at least when it comes to this model and its auto-dimming rearview mirror/compass, garage door monitor, moonroof or active safety, because the car tested was a four-cylinder powered XLE and there certainly was an electrochromic mirror, garage door opener and moonroof overhead, while the side mirrors lit up with blind spot warnings when needed, but Toyota’s retail website was very clear in stating that this model with these features doesn’t exist. I beg to differ, as does a local dealer that I’ve grown to trust about such issues, and to that end I’m glad it’s not true or I’d have to ream the brand out for forcing folks who just want the safest vehicle possible into a thirstier, less environmentally friendly V6, the 2.5 receiving a five-cycle EnerGuide rating of 9.7 L/100km city, 6.9 highway and 8.4 combined compared to the 3.5’s 11.0 city, 7.7 highway and 9.5 combined.

Then again they actually do deserve a little knuckle rap because the upgraded colour multi-information system with lane departure alert and pre-collision system can’t be had with the XLE 2.5, nor can safer, clearer LED headlamps, dynamic radar cruise control, and the 10-speaker JBL audio system, but all come standard with the XLE V6. I’d like to see Toyota offer these top-tier features in a package or as standalone features so that those who wanted the many benefits of a four-cylinder engine would still be able to access optimal safety, visibility, road trip convenience and sound quality.

I should mention here that the trims I passed by quickly earlier include the SE, that’s also impressively featured with a focus on sportier styling and even including a very unique new Special Edition that I’ll be reviewing soon, while the XSE comes kitted out very similarly to this XLE albeit with a focus on performance as well as luxury, pulling up some of the SE’s styling details while adding larger rims and tires, a sport-tuned suspension and paddle shifters for the standard Camry’s wonderfully smooth and positive six-speed autobox. I must admit that last year I tested the latter car in V6 trim and really enjoyed its capability on the road.

Yes, I know I’m talking about enjoying the drive experience in a Camry, and while there are haters out there who love to dis anything successful, Toyota’s mid-sizer didn’t get as popular as it is by lulling its owners to sleep. Certainly its suspension is biased towards comfort and its ride borders on sublime, but even get this XLE into a fast-paced set of curves and it’ll hold its own unless pushed beyond reason. I’m not going to try and pretend it’s the sportiest in its segment, buyers in this class clearly not wanting performance over ride quality as proven by sales, but it takes to quick corners respectably and more importantly is a fabulous high-speed freeway cruiser.

Truly, the Camry does most everything well. It might just be the ideal all-rounder, scoring high in pretty well every category, even crash tests where the IIHS has already given this 2016 version Top Safety Pick + status with the optional active safety equipment just noted, whereas the NHTSA grants all Camrys their best five-star rating. As for reliability, Toyota is legendary for getting its owners where they’re going more often than not, the brand scoring third out of 31 auto brands in the latest J.D. Power and Associates 2015 Vehicle Dependability Study, that placement actually the highest for non-luxury brands (as long as you consider Buick luxury).