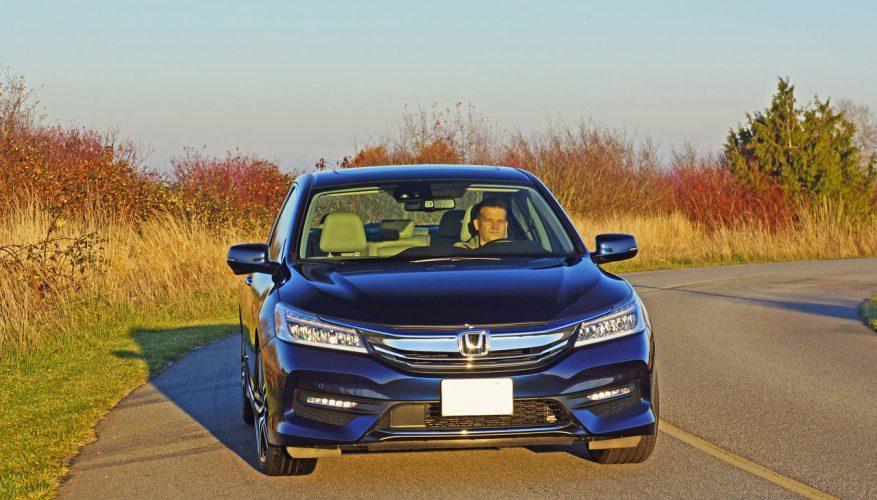 By: Trevor Hofmann
Have you ever had to suffer through some know-it-all blowhard spouting off about mid-size four-door sedans being nothing more than plebeian family shuttles for boring unimaginative working stiffs, or something along those lines? Yes, I find those with the loudest opinions are often the ones that know least, and when it comes to cars, something I have more experience with than most know-it-all blowhards, these schleps couldn’t be farther from the truth, at least when the Honda Accord is at stake.

I’ve been reviewing the Accord as long as I’ve been covering the automotive industry, the first one almost exactly 15 years ago in December of 1999. It was a 2000 model, and after singing its praises I followed that up with yet more positive remarks about a 2002, 2003, 2008 (I was editor for numerous 2004 through 2007 models in between), 2010 (after editing yet more again), 2011, 2012, 2013, 2014, 2015 and now this 2016 model, and these are just the four-door Accord sedans, not the many two-door Accord Coupes and Accord Crosstours I’ve covered and edited as well, plus of course various four-door Accord Hybrid models. With each and every test drive and all of the reviews that followed I responded in similar two-thumbs-way-up fashion, my most recent Accord Sedan Touring model eliciting my most enthusiastic notes yet, which I will expand on now.

First off, just look at those headlights. They’re really stunning, my top-line Touring tester boasting the most intricately detailed, incredibly complex full LED headlamps to have ever graced the front of a Honda product. They’re automotive jewelry at a level normally only found on a premium branded car like Acura’s TLX, although these are different than the now trademark lenses offered by Honda’s luxury line. Last year’s Accord Touring LED headlamps were closer to those on the Acura, but these brilliantly dazzling new ones leave the oldies in the past where they belong. They’re joined by LED turn signals, also exclusive to Touring trim, while LED brake lights are part of the EX-L, LED front fog lamps and LED turn signals integrated within the side mirror housings upgraded from second-rung Sport trim, and LED daytime running lights plus LED taillights standard across the entire Accord Sedan line.

It all comes as part of an extensive mid-cycle update for 2016, the Touring model I tested last year attractive but nowhere near as intriguing. All Honda did was rework the front clip, adding styling cues from its new tech-inspired design language awkwardly dubbed "Exciting H Design!!!" (no really, I couldn’t make stuff like this up, exclamation marks included!!!) with its chromed “Solid Wing Face” up front and centre. I can’t say I’m a big fan of this styling direction as per some of the Japanese brand’s models, but I like it with the Accord. Along with the grille’s chromed strikethrough that bends upwards at both ends similarly to a wing, those headlights I went into detail describing earlier and the rest of the car’s frontal design that’s a great deal more interesting the lower it goes, Honda’s relationship with McLaren F1 at least paying off when it comes to aerodynamic “front wing” styling, additional changes include a reshaped hood that’s now made from aluminum, rocker extensions down each side, and a much more subtle reworking of its backside with the standard LED taillights mentioned earlier displaying new lenses plus a more sophisticated lower fascia, while a very sporting set of machine-finished twinned five-spoke alloys with black painted pockets on 235/40R19s now rounds out the design.

Honda doesn’t hold back with the chrome on the Touring model either, with two narrow pieces visually supporting the grille’s “solid wing”, a thin strip straddling the centre engine vent down below, more adorning the bezels surrounding the fog lamps, yet more wrapping all the way around the greenhouse, plus four chromed door handles, an especially thick piece of brightwork finishing off the trunk lid garnish, an additional long, narrow strand of the shiny stuff across the lower portion of the rear bumper, that final bit resting above an elaborate diffuser-style lower valance incorporating twin rear fogs, a black mesh insert and a body-colour portion in between, not to mention a large chromed exhaust finisher for this four-cylinder model (the V6 gets dual exhaust). Honda also finishes off the Touring’s deck lid with a sporty rear spoiler, an appropriate complement to the refreshed four-door’s stylish new lines. All in all it’s a great looking mid-size family sedan that, in my opinion at least, is a lot more appealing than a number of premium sport-luxury sedans.

It’s all complemented by a very upscale looking interior, which like the exterior design is also more sophisticated than a number of its peers. My tester was finished in a two-tone black and grey look, with a dark graphite dash top and door uppers, the latter diagonally slashed halfway through with grey padded soft-touch leatherette. It’s a great look, combining well with the tasteful use of faux woodgrain. The wood is obviously fake, but they’ve finished it in a glossy grey so that it doesn’t stand out quite as much as natural wood tones would, yet it still looks classy, while the solidity of this “photo-synthesized” plastic is much better than some others in the class, particularly the Toyota Camry.

I’m also impressed with the updated Accord’s analog electronics, specifically the primary gauges that are absolutely stunning. The speedometer seems to hover overtop the rest of the dials, in a layered relief look, and when you’re driving efficiently its circumference brightens with an apropos green glow. In Sport mode it glows red, nothing particularly innovative or creative about this, but still pleasing to the eye. Within that speedometer is a large high-resolution colour TFT trip computer filled with loads of useful functions, but it’s nowhere near is complete as the two much larger displays atop dash central and the centre stack.

The top screen is recessed considerably and filled with yet more trip info, driving data like current and average L/100km (mine sitting at 11.0 throughout most of my week), audio settings, a compass, digital clock, turn-by-turn directions, incoming calls, SMS text messages, parking sensor alerts, the backup camera’s display, and my favourite Honda feature, the LaneWatch blind spot video system that uses a rearward facing camera on the passenger-side mirror to project a live feed of the blind spot when activating the right turn signal. This 7.7-inch upper display is actually an intelligent multi-information display (i-MID), what most other manufacturers house within their primary set of gauges, while like those it’s also controlled by steering wheel-mounted switchgear.

The seven-inch lower touchscreen is surrounded in beautiful brushed aluminum-look trim and contains the majority of infotainment features such as navigation (if equipped), audio, car info, the usual settings, HondaLink Assist (e911), aha, HD Radio, phone, and an even more advanced smartphone section. Most interestingly it’s one of the industry’s first applications of both Apple CarPlay (with Siri Eyes Free compatibility) and Android Auto, the capacitive touchscreen allowing swipe, tap and pinch capability as also used with smartphones and tablets. The optional navigation system is smartphone-linked, incidentally, while Bluetooth audio streaming is joined by voice controlled SMS text/email messaging, Wi-Fi tethering, and more.

The impressive part of all this tech is that most of it is standard with the base Accord LX, the upgrades including a better 360-watt and subwoofer-enhanced audio system in Sport trim, satellite radio in EX-L trim, plus HD radio and navigation with 3D map display in Touring trim. I should also mention that a wireless charging pad doubles as a place to stow your cellphone at the very base of the centre stack, very techie stuff for this top-line Accord Touring.

My Touring tester also included the Honda Sensing package as standard equipment, which adds Lane Departure Warning (LDW) with Lane Keeping Assist (LKAS), Road Departure Mitigation (RDM), Forward Collision Warning (FCW) and Collision Mitigation Braking (CMBS), plus a favourite road trip accessory, adaptive cruise control, upon inclusion gives the Accord an IIHS Top Safety Pick + rating, whereas all Accord Sedans achieve a 5-Star crash test rating from the NHTSA. This impressive load of active safety and convenience features is only available with the optional continuously variable transmission (CVT), however, but this seemingly negative fact might just be unusually good news to those who prioritize performance, as the CVT’s optional status means there’s a much more engaging six-speed manual gearbox standard. Normally DIY shifters are relegated to lowly base trim or completely eliminated from mid-size offerings, but Honda hasn’t forgotten its sporting roots and therefore continues to offer it in all four-cylinder trims.

Yes, unlike the Touring trimmed variant I tested last year, this one features Honda’s 16-valve, DOHC, direct-injection 2.4-litre four, capable of 185 horsepower at 6,400 rpm and 181 lb-ft of torque at 3,900 rpm, a peppy powerplant that’s not going to win many stoplight wars but is feisty enough for an enjoyable off-the-line sprint and plenty of high-speed action on the freeway. My tester wasn’t equipped with the six-speed manual, but rather came with the CVT that will no doubt take care of most peoples’ singular shifting duties 99.9 percent of the time, this autobox featuring a Sport mode that, while a bit peaky added a little more engagement to the performance equation.

Of course the CVT does more to benefit fuel economy, the latest Accord achieving a five-cycle EnerGuide rating of 8.6 L/100km city, 6.4 highway and 7.6 combined so-equipped with its Eco Assist system engaged (the big green button on the dash), or 10.3 city, 7.2 highway and 8.9 combined with the manual, both very good sets of numbers for the mid-size class.

The four-pot Accord is not only powerful enough for enjoyable highway cruising, but its fully independent MacPherson strut front and multi-link rear suspension setup provided a thoroughly comfortable ride that remained very planted in its lane, while stabilizer bars at both ends and even a standard front strut tower brace resulted in decent road-holding through fast-paced curves, no doubt aided by those optional 19s noted earlier.

So like I said at the beginning of this review, do your best to mentally block out the advice of know-it-all blowhards, unless one of those blowhards is an auto journalist, the majority of which agree with my assessment of the Honda Accord. It’s not only a much more compelling car than any previous example from a visual standpoint, coming close to premium-level detailing while surpassing many with lofty brand names, but it’s also one of the most technologically advanced cars currently available, that happens to drive very well. Of course you can upgrade my tester’s four-cylinder with a 278 horsepower 3.5-litre V6 to get yet more performance, but I’ve got a feeling most Accord buyers will be more than happy with the fuel-efficient four. I certainly was, and likewise for the entire car. You can do a lot worse than a Honda Accord, but you can’t get much better.