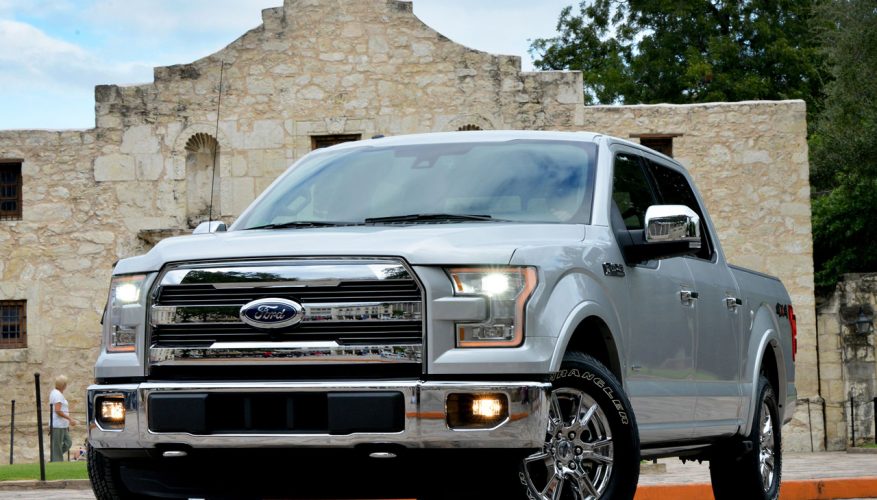 By: Trevor Hofmann
The commercial and consumer truck world is about as far away from motorsport as can be, unless we’re talking the FIA sanctioned European Truck Racing Championship or South American Formula Truck series, both of which actually race big highway tractor trucks on twisting road courses, or closer to home, the Camping World Truck Series that runs as part of NASCAR, although those trucks, like the cars that run in the Sprint Cup Series, don’t actually feature any real vehicles on Sunday that you can buy on Monday.

Still, there are some very important rules of the road that affect road vehicles as much as racers, if you want to win on the street or track you need to 1) add more power and 2) reduce weight. Of course there area other factors too, such as aerodynamic development plus chassis design and refinement, but for now we’ll just focus on the two, while adding in fuel economy which allows fewer pit stops and ultimately a better chance of winning the race, thus leaving more coin in your pocket.

While Toyota Tundra driver Erik Jones took top honours in NASCAR’s truck series this year, Ford has a vested interest as one of three manufacturer brands and even sponsors the last race of the year dubbed Ford Ecoboost 400 (it’ll be the Ford Ecoboost 200 next year) at Homestead-Miami Speedway. The blue-oval came 2nd, 10th, 11th, 24th, and 26th in this “home” race last month, which has gotta hurt, but not as much as coming last in the entire series, albeit not by much as the points spread is pretty tight.

As much as that old slogan about Sunday winning and Monday sales made a difference back in the stock car heyday when legends like Dan Gurney circled Daytona in Galaxies and Cyclones and “King” Richard Petty did likewise in Challengers and Superbirds, and more importantly we all watched on non-pay TV (at least there was no extra charge), the weekend’s event actually made a difference in weekday sales, but in today’s truck world at least, loyalties run way too deep for any real difference on the sales floor, and Ford owns the biggest percentage of light truck devotion than any of the big three, let alone Toyota’s tiny slice of the market, and after testing every truck on the market I have to say they’ll likely maintain that leadership for some time to come.

What Ford offers that upstarts like Toyota don’t is variety; from myriad body style and bed length combinations to a slew of powerful yet fuel efficient engines. That Ecoboost name I referred to a moment ago is normally associated with the brand’s direct-injected and turbocharged engine lineup, not motorsport races, the former which includes everything from a tiny three-cylinder unit in its subcompact Fiesta to this most powerful 3.5-litre V6 available within the F-150 full-size pickup truck lineup, not to mention yet more cylinder counts and displacements within the F-150 range and other Ford and Lincoln products. This engine is not to be confused with the F-150’s base powerplant, a normally aspirated 3.5-litre V6 that’s decent as far as entry-level engines go, but nothing close to the Ecoboost variant.

The difference is 282 horsepower and 252 lb-ft of torque for the base unit and 365 horsepower and 420 lb-ft of torque for the Ecoboost, taking care of the “more power” portion of the motorsport equation referenced earlier. This V6 doesn’t quite offer the same power as the 5.0-litre V8 that slots one engine above in pecking order, although if you’re looking to tow, with a top GCWR of 7,756 kilos (17,099 lbs), it decimates the pricier powerplant.

More than just noteworthy, I previously tested yet another powerplant that would never have been made available if Ford hadn’t adhered so stubbornly to motorsport rule 2, and shaved an average of 280 kilos (617 lbs) from the F-150’s curb weight, so now along with the base V6, this turbocharged V6 and the V8, you have the option of a 2.7-litre four-cylinder capable of 325 horsepower and 375 lb-ft of torque. Remember that variety comment I made earlier in this review? Toyota offers one single V8 that doesn’t make anywhere near as much torque as the 3.6 Ecoboost I tested here, yet is the half-ton pickup segment’s thirstiest fuel guzzler by far, chugging back 18.2 L/100km city, 14.1 highway and 16.3 combined according to Transport Canada’s new five-cycle EnerGuide rating system. So how do Ford’s engines do?

Speaking of savings, my tester was trimmed out in mid-grade Lariat guise, which meant it was fancier than the XLT I drove with the 2.7, but not as kitted out as Platinum model I drove previously. Of course, that was in the old body style and fitted with a less improved interior, this entirely new aluminum-bodied truck a completely rethought F-150. I’m not going to comment on styling other than to say that Ford toughens up this truck’s look with each new generation, this 2015 model looking almost as work-ready as one of the blue-oval gang’s Super Duty variants. The most noticeable change is the size and shape of the headlight clusters, which give off more ruggedness than elegance. Of course Ford is shooting for this image as its F-150 targets those with John Wayne aspirations, but I doubt “The Duke” ever road around his ranch in anything so civilized.

Inside it’s thoroughly upgraded, but I’m sure if you’re used to F-150s of yore you’ll feel comfortably at home in this new version. My Lariat was finished with nice leather-like padded dash sections stitched together for an upscale look and feel, with the left portion wrapping down each side of the primary instrument package and the one ahead of the front passenger folding over the dash to the mid-way point of the IP, where a recessed textured metallic inlay looked positively rich. The door panels received a vertical slash of the same trim, while the door upper got a padded leatherette treatment on its back two thirds, where your elbow is more likely to reside when not using the even softer armrest. Soft synthetics aside, the large centre armrest/bin lid that’s bigger than some sports car trunks was covered in the real deal, my Lariat also receiving a leather-wrapped steering wheel, shift knob and boot, plus leather seats of course, these skinned in perforated hides and stitched together with the same light grey thread used elsewhere throughout the cabin. It all looked fabulous.

Most of the F-150’s switchgear was high quality, tight fitting and well damped, while some of the rotating dials were rimmed in rubber and others just looked like it, but were finished in a durable feeling plastic instead. A few highlights included that aforementioned primary gauge package that’s ultra-clear and highly legible, especially its cool blue needles, while my tester featured a large full-colour TFT multi-functional display in the middle loaded with features. Atop the centre stack was an even more functional full-colour high-resolution infotainment screen filled with the MyFord Touch interface along with its user-friendly quadrant layout, my tester also incorporating an available navigation system, whereas the backup camera and rear parking sensors were especially helpful with such a large vehicle.

On top of this my Lariat tester added everything in the Equipment Group 501A package that includes high-intensity LED security approach lights, LED spotlights, power-folding side mirrors, a garage door opener, navigation, a 10-speaker Sony audio system, and blind spot information with cross-traffic alert, plus it also included the Equipment Group 502A package that adds HID headlamps with auto high beams, LED taillights, 18-inch chrome wheels, lots of chrome exterior trim replacing the body-colour items mentioned earlier, a heatable power tilt and telescoping steering column with memory, heatable rear seats, and rain-sensing wipers. You can dress it up further if you like, but believe me a loaded Lariat is as much as anyone “needs” and most could want for.

Of course, along with a suspension that balances a nice ride with good handling dynamics, the latter as important for driving enjoyment as it is for accident avoidance, the F-150 is filled to the gills with standard safety gear, enough so that the IIHS gave this newest version a Top Safety Pick for 2015 while the NHTSA awarded it five stars, so we can feel assured that it’s at least one of the safest pickups available, if not the safest. After all, none of its competitors achieved a Top Safety Pick rating, while only GM’s half-tons managed five-star crash tests.

So do you think Ford needs to worry about competitors stealing the F-150’s front-running glory anytime soon? I don’t. Along with all of this pickup truck goodness the F-150 is available with the most innovative bed access system in the industry, a step that gets pulled out from within the tailgate and drops down to provide an easy climb up to the box. They even include a pop-up handrail to make things safer still. No other manufacturer offers anything like it, GM’s bumper corner steps the next best thing, but still requiring a longer stretch than this retractable step system. Additionally, you can get your F-150 with kick-out side steps for accessing cargo near the front of the box.

Again, as long as Ford keeps its F-150 this far ahead of the competition it should maintain its comfortable sales lead for years to come, at least. While the Ram’s new small-block diesel is making news for fuel economy and Nissan’s new Titan is grabbing headlines for a Cummins diesel of its own, which will soon be added to Toyota’s Tundra, the Sierra and Silverado twins reportedly getting a small diesel of their own sometime soon as well, nothing really comes close to the sophistication of the F-150, from its alloy body panels to its incredible engine lineup, while the just-noted safety rating is something that would certainly help me sleep better at night.

F-150 pricing starts at just $24,899 plus freight and dealer fees, while Lariat trim begins at $48,599 and reaches up over the $50k range very quickly, my kitted out version breaking $60k. For that you get a half-ton hauler with a level of advanced technology that you’d never see racing around any Camping World Truck Series track, let alone with any of the F-150’s rivals.
©(Copyright Canadian Auto Press)
Car Shopping Tools