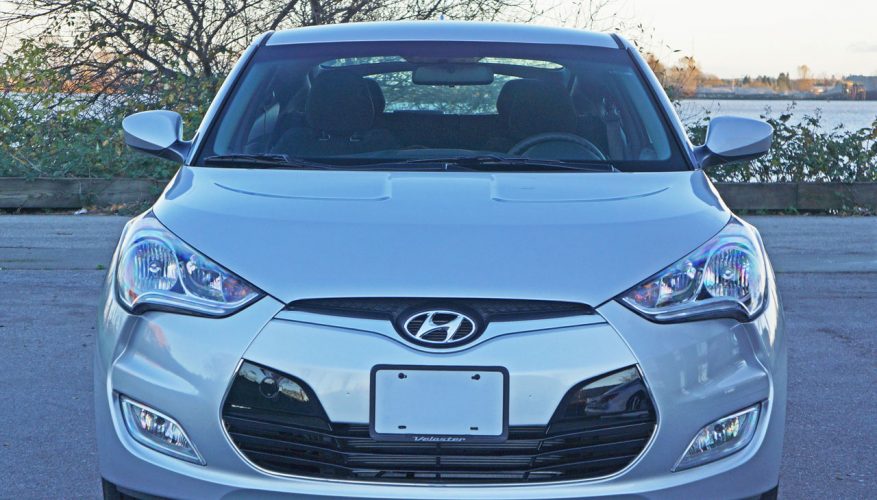 By: Trevor Hofmann
Every now and again you hear naysayers claiming that Hyundai is giving up on its Veloster, mid-2014 being particularly busy with such talk, but not only is it here again for 2016 in all of its wonderfully unorthodox glory, it’s actually better than ever.

Even though the Veloster sells in small numbers most people should find it familiar due to its unusual shape. If you see one driving by from the driver’s side it’ll look like a sporty two-door coupe, or three-door as Hyundai normally refers this body style, with an elongated roof and abruptly vertical hatch pinched together via unique almond-shaped tail lamps. Seen from the passenger’s side, however, it looks like a four-door hatch, or rather a five-door in Hyundai-speak. In actual fact the Veloster is neither, but instead a four-door comprised of three side doors and a hatch in back.

It’s not the first of its kind by a long shot, Saturn’s SC2 Coupe offering a rear-hinged clamshell back door design from the mid-’90s through to the early ’00s, although stupidly its rear door was fitted to the driver’s side making rear access from curbside less convenient, whereas Mini’s outgoing Clubman rectified this oversight, although the rear door was offered in the same less functional suicide-style. The Veloster’s abbreviated rear door is a regular front-hinged designed with its handle cleverly hidden within the C-pillar, so access to the back doesn’t first require the front passenger door to be opened, while getting in and out is easy and rear seat roominess is quite good as far as compact coupes go, with lots of legroom plus decent headroom unless your passenger is taller than six feet. Due to its rear liftback cargo access is easy too, and with 440 litres (15.5 cubic feet) of volume behind the 60/40-split rear seatbacks plus 982 litres (34.7 cubic feet) when they’re folded nearly flat it makes for a very utile package.

The Veloster’s exterior design is the same this year as last, and almost identical inside. Up front it delivers a unique take on Hyundai’s usual sporty compact interior design, with a similar two-dial primary gauge setup to the Elantra, albeit framed by a unique three-spoke multifunction sport steering wheel and, to the right, a completely exclusive V-shaped centre stack that houses a very impressive new infotainment touchscreen up top, a larger rotating HVAC controller surrounded by a nicely organized array of high-quality buttons just below, a big engine ignition button under that, and metallic trimmed buttresses that reach down to surround the lower console-mounted shifter.

Other than the infotainment system just noted the Veloster cabin is status quo, meaning it’s filled with mostly hard plastics, albeit these are textured with a nice feeling soft touch paint, while the door inserts and armrests are covered with a padded synthetic. Loads of satin-silver accents and chrome details help to enhance the décor, while the sport seats are well bolstered and covered in a nice woven fabric with contrast stitching for a sporty look.

That seven-inch high-resolution colour infotainment system is some top-tier tech. It includes the usual AM/FM/CD/satellite settings and great sound, while a new info section offers sports schedules and scores, stock info, and a Blue Max mode featuring a bright sky blue graphically detailed display complete with the Veloster’s profile on grass surrounded by trees and a pseudo “START” button below that scores your driving; kind of a video game to improve your green driving skills. I’m ok with that, but I wasn’t about to spend my time in this fun-loving sport coupe trying to eke out the best mileage, but rather I had a mind preset to performance.

Ok, maybe I set my expectations too high for a car kitted out with just 132 horsepower and 123 lb-ft of torque, this 1.6-litre four-cylinder not one of Hyundai’s most intoxicating mills despite direct-injection and dual continuously variable valve timing, although its high-revving nature and the six-speed dual-clutch automated Ecoshift transmission it was mated up to, with paddle shifters no less, made the most of the output available. Before continuing on take note power hounds, that you can get a Veloster Turbo with more than 200 horsepower and that is one serious little rocket, yet there’s still nothing at all dull about this base model when pushed to its limit, especially through twists and turns.

Keep the revs between 6,750 rpm and 8,000 and you’ll get the performance you’re looking for along with the sound of a four-pot sport bike, the ideal background music for tackling a backcountry farm road, preferably one that snakes along a quiet river or serpentine mountainside. That’s where the Veloster likes to show its mettle, delivering sharp handling and good overall control for a front strut and rear torsion beam suspended setup. With ample wheel travel and stabilizer bars at both ends it won’t hop and shimmy over bumps and dips in the pavement like some others, the Veloster always feeling controlled and composed during my test, although the ride is firm enough for all such road imperfections to be felt, as a sports model should be, but it’s by no means rough. I could easily commute in this car every day, while the seats are wonderfully comfortable and amply supportive when throwing the Veloster through the curves.

The best part of all this go-fast goodness is a window sticker of $21,599 as tested, plus freight and dealer fees of course, and that’s including the dual-clutch paddle-shifted autobox. The same SE trim is $1,400 easier to get into with the six-speed manual, or you can go with a base model and pay just $18,599 plus fees. For that kind of money you’ll still get a well-equipped car, a shortlist of highlights including fog lights, 17-inch alloy wheels, heatable powered side mirrors, chrome-tipped dual centre exhaust, keyless remote, powered windows, a tilt and telescopic multifunction steering wheel, air conditioning, the 7.0-inch high-resolution colour touchscreen infotainment mentioned earlier, Bluetooth, voice recognition, six-speaker AM/FM/CD/MP3/iPod/USB/AUX audio, a six-way adjustable driver’s seat, four-wheel discs with all the usual electronic driving aids, the usual six airbags and more. The move up to mid-grade SE trim adds a hood insulator for quieter operation, proximity entry with pushbutton ignition allowing more convenient access and operation, auto-up/down for the driver’s window, cruise control, a rearview camera, satellite radio, heatable front seats, and more.

You can still upgrade your Veloster with a Tech package that adds slightly more than $4k to the price while increasing content to include larger 18-inch rims, auto on/off projector beam halogen headlights with LED accents, LEDs set into the side mirror housings and LED taillights, plus high-gloss black interior trim, alloy pedals, a heatable leather-wrapped steering wheel, a leather shift knob, leatherette door inserts, a Dimension audio upgrade with eight speakers, an external amplifier and a sub, while additional Tech features include upgraded fabric upholstery with leather side bolsters, rear parking assist, a 110-volt household-style power outlet, and a panoramic sunroof, but that’s another story for another time.

Speaking of a future review you can also get more by opting for the previously noted Veloster Turbo, while Hyundai has what I think is the best limited-production model ever this year, Rally trim that includes exclusive matte blue paint, lightweight 18-inch Rays rims, black carbon fibre-look aero add-ons, an even sportier suspension with upgraded dampers, coil springs and stabilizer bar, plus a B&M Racing short-throw shifter mated up to the Turbo’s 201 horsepower turbocharged four.

Back to reality, neither that nicely massaged version or the regular Turbo will return fuel economy as good as my Veloster DCT’s 8.3 L/100km city, 6.5 highway and 7.5 combined or the manual car’s 8.8, 6.7 and 7.8 rating, although to be fair the Turbo’s 8.1 combined mileage is pretty impressive for providing such a solid dose of power, making either Veloster as good a daily commuter as weekend warrior, a great combination sports coupe for getting where you want to go in style without leaving your friends behind.

It would be a shame if Hyundai chose to discontinue the Veloster, as it’s such a multitalented sports coupe with a practical element no rivals can match. That it can be had for such a great price makes it all that much better.
©(Copyright Canadian Auto Press)
Car Shopping Tools