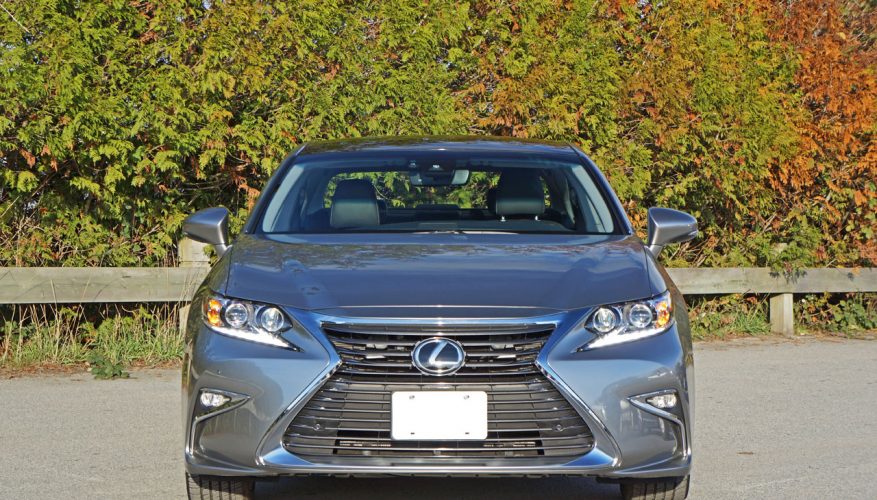 By: Trevor Hofmann
Long, lean and now endowed with a much more committed take on Lexus’ brand-wide spindle-shaped grille and accompanying front fascia, the refreshed 2016 ES 350 is an altogether more stylish and attractive mid-size sedan, or at least that’s this journo’s opinion. Lexus has given its once conservative mid-size front-driver the RC treatment, and I’m not talking Royal Commission or remote control but rather the Japanese brand’s gorgeous new two-door sports coupe.

I don’t know about you, but I find it difficult to turn away from the ES’ broader, deeper, polished nickel-rimmed and glossy black multi-angled front latticework, and not only because of this most noticeable upgrade, but also due to needle-sharp scalloped LED headlamp clusters with LED DRLs, similarly pointy chrome-bezeled LED fog lamps at each lower corner, beautiful multi-spoke 18-inch alloys rounding out a sleek profile highlighted by polished nickel brightwork surrounding the side windows, elegantly elongated and reshaped LED taillights conjoined by a thicker and better-integrated slab of bright metal, and new rear diffuser-like lower valance incorporating downright sporty looking dual chrome-tipped angularly ovoid exhaust pipes, the new ES an all-round more appealing and unique shape. This is a big visual step up for the Avalon-based model, and one I hardily condone.

All four doors open wide to allow easy access front and rear, my tester sporting stylishly sporty black leather-clad and white stitched upholstery (a “Flaxen” caramel brown is also available) that looked ideally suited to comfortable cruising. I immediately took in a cabin that’s still suitably devoid of most of the hard plastics I grumbled about in the previous fifth-generation ES. Of course, Lexus always finished the dash top, most of the instrument panel and all four door uppers in soft pliable synthetics, but since the sixth-gen ES debuted for the 2013 model year even these surfaces were upgraded while yet more improvements were made throughout the interior. The hard plastic started further downward around hip level, while the centre stack received Lexus’ first-generation Remote Touch Interface and associated leather-covered hand rest that’s still present, a once state-of-the-art infotainment controller that only looks old because of Lexus’ own second-gen RTI found in the new RC noted earlier, as well as the new NX and RX. That hand rest gets stitched in white to go along with the seats and armrests, albeit the latter items incorporate extra padding for added comfort. A soft piece of leatherish trim spans the dash ahead of the front passenger too, enhancing style and safety.

The rest of the cabin remains a feast for the luxuriant soul, with beautiful metallic and genuine hardwood inlays highlighting the instrument and door panels, yet more wood and metals on the lower console, whereas the ES’ steering wheel remains a revelation in performance-oriented luxury. It’s rimmed in white-stitched black leather in my tester, along with wood in three separate sections, while the two side spokes’ switchgear is superb, as are the other buttons, knobs and toggles throughout the rest of the car, while the my ES tester shed light on all its handiwork via beams of overhead LEDs front and back as well as a dual-pane panoramic sunroof that makes for an open and airy ambiance.

Ahead of the driver are the model’s usual bright, clear and colourful Optitron gauges, although a 4.2-inch high-resolution colour TFT multi-information display now sits between the tachometer and speedometer, looking good and filled with lots of useful go-to data, while the deeply recessed and properly shaded infotainment system appears identical to last year’s very effective design, although the console-mounted RTI controller mentioned a moment ago gets a nice new greyish metallic-silver pedestal that houses long, narrow buttons at each side for making selecting a given “link” after toggling around the system, adding just that little bit more control without having to totally update to the gen-2 touchpad.

ES 350 buyers should never feel unloved, at least by Lexus that pampers even those at base levels with myriad standard features to go along with the creature comforts already noted. A shortlist for the $41,400 entry model includes frontal LEDs, 17-inch alloy wheels, Lexus’ Smart Key proximity-sensing passive access with pushbutton ignition, powered windows with auto up/down all-round, an electrochromic auto-dimming rearview mirror, clearance and backup sensors plus intuitive parking assist, a universal garage door opener, a tilt and slide powered moonroof, an LED illuminated analog clock, dual-zone auto climate control, the eight-inch infotainment display I commented on earlier, an eight-speaker AM/FM/CD/MP3/WMA/USB/AUX/satellite audio system with Bluetooth streaming and phone connectivity, plus 10-way powered front seats that are also heatable and ventilated, although unlike my tester’s the base seats are covered with NuLuxe faux leather, but this said leatherette upholstery is an especially common occurrence amongst the base Germans as well.

Additionally the ES gets a standard rear-seat pass-through that, while ideally good for skis down the middle when four occupants are enjoying mountain views via heatable window seats, it’s a rather small hole to pass four sets of skis through, but I must admit the trunk is plenty large at 430 litres (15.2 cubic feet) so smaller kids’ skis will fit in sideways or on an angle. I’m going to guess that most active lifestyle families will just buy an NX, RX, GX or LX instead and be done with it, so go ahead and enjoy all that trunk space for your golf clubs.

Continuing with standard features, the ES has long been a safety leader so it gets all the usual airbags as well as driver and front passenger knee blockers, while tire pressure monitoring joins Lexus’ usual Star Safety equipment including ABS-enhanced four-wheel disc brakes with electronic brake-force distribution and brake assist, traction and stability control, and Smart Stop Technology (SST) that limits power to the front wheels under braking.

With all of its optional safety equipment the 2016 ES earned Top Safety Pick + honours from the IIHS, while the NHTSA has yet to rate the 2016 model. Then again, last year’s ES earned a five-star rating from that U.S. government safety organization so the 2016 should do likewise as its mostly carryover under the skin.

Front and rear spaciousness is excellent and the rear seats are fabulous. They’re sculpted into two bucket-like outboard positions, with superb lower back support, ideally placed lower squabs and loads of leg, hip, shoulder and headroom, not to mention a comfortable flip-down armrest with dual cupholders at centre, heatable cushions in both outboard positions, plus those rear window sunshades just noted that even include sideways-sliding shades for the tiny quarter windows, while as also mentioned the rear glass can be shaded via a powered version of the same, so I figure with the money you’ll save on an ES over a similarly roomy full-size luxury sedan, such as the LS, you can hire someone to drive you around.

Politically incorrect dreams of living in a third-world country with labour that’s cheap enough to fulfill such fantasies on a journalist’s wage aside, the newly upgraded front-drive four-door improves as a driver’s car, but the experience behind the wheel remains 100 percent ES. That’s a very good thing, I should add, because Lexus has its strong ES following to consider, and besides the two sportier models I noted earlier already have the performance end of the sedan lineup handled. Instead, the ES is still mostly about quiet, serene comfort, a task it takes to very well, although it now also takes to corners impressively too, drives brilliantly on the highway, and remains totally stable and always in control if left to reasonable albeit high speeds, especially with the dash-mounted Drive Mode Select dial set to Sport mode. This said I tend to drive the ES much more sedately than I would an IS 350, for example. I’m sure that I’m not alone in this regard, as I rarely see an ES 350 blast past in a rapid rush unless there’s new driver “N” sticker on the back bumper and a teenager or young adult male at the wheel. It seems the personality type that purchases an ES is more interested in relaxed luxury than extracting the most out of this car’s performance potential, but take note it’s there when required.

The ES 350 doesn’t get the most powerful V6 in Lexus’ lineup, but thanks in part to dual variable valve timing with intelligence (VVT-i) the 24-valve, DOHC, 3.5-litre mill puts out 268 horsepower and 248 lb-ft of torque resulting in spirited performance. spirited performance. Fuel efficiency is reasonably good for the V6-powered mid-size class at 11.4 L/100km city, 7.6 highway and 9.7 combined, while if you’d rather pay less at the pump and apply a smaller footprint on mother nature ES can be had in 300h hybrid trim that’s a near class-leading 5.8 city, 6.1 highway and 5.9 combined.

Another ES benefit is reliability, a strong point for Lexus on the whole as well. In the latest J.D. Power and Associates 2015 Vehicle Dependability Study the ES placed number one in the Compact Premium Car segment (yes, we all know it’s a mid-size car, but try telling that to J.D. Power), while the brand’s CT 200h was third and the brand placed first overall by a very wide margin.

Either car is sublime to drive around town, on the highway, and now even on a curving road, where the ES is ultimately comfortable, quiet and suitably luxurious, the perfect car to cruise through busy traffic, take on a road trip, or as mentioned, be driven in. Now that the 2016 ES has been given Lexus’ stylish new duds and had its interior slightly upgraded it should have no problem continuing as a bestseller in the front-drive mid-size luxury class.
©(Copyright Canadian Auto Press)
Car Shopping Tools