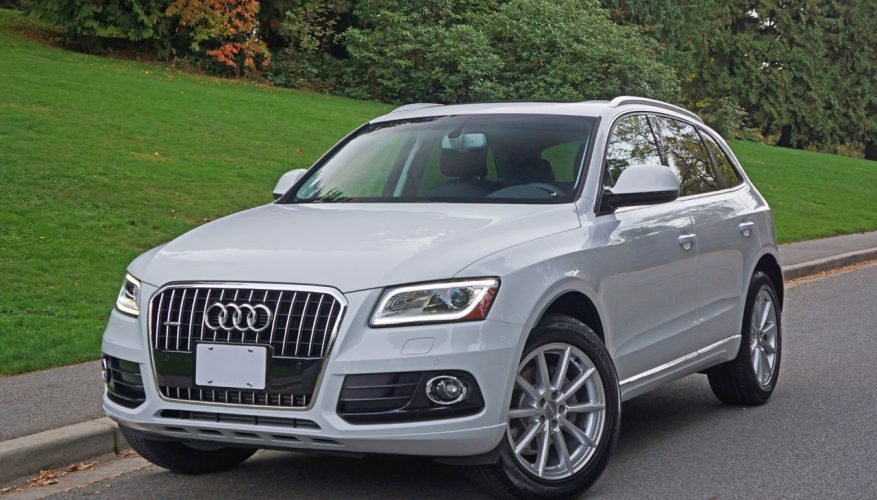 By: Trevor Hofmann
The Q5 is mostly unchanged for 2016, but that certainly won’t get in the way of this models popularity. It remains North America’s most popular compact crossover SUV, not to mention the only four-ringed vehicle that leads its segment in sales.

That’s right, the Q5’s record-breaking 7,862 Canadian deliveries in calendar year 2014 beat Acura’s RDX by 1,305 units, Mercedes’ GLK by 2,263 sales, BMW’s X3 by 2,643, Infiniti’s QX50 by 5,965, and Volvo’s XC60 by 6,320 (the Q5 also sold 6,156 more units than the Range Rover Evoque, but the stylish Brit is a smaller vehicle that competes more directly against the Audi Q3). It’s been open season this year, however, as 2015 will be the first full year for a staggering number of new entries that have truly shaken up the compact luxury SUV market, including the Lexus NX, Lincoln MKC and Porsche Macan in order of popularity, the NX already ranked third for year-to-date 2015 sales as of October, ahead of the GLK and X3, the MKC in fifth and Macan in sixth, both ahead of the QX50 and XC60, with another set of newbies arriving just this year including the all-new Land Rover Discovery Sport plus a very intriguing new GLC (great little crossover?) just hitting Mercedes dealers as the ink to this story dries, so to speak, and replacing the aging GLK in the process.

Talk about an exciting market segment, the compact luxury crossover class only rivaled by the subcompact SUV segment that’s been growing exponentially too, although so far at least, Audi’s Q5 has risen to the top, still leading YTD 2015 sales by a long shot. This is even more interesting because the premium sector especially loves the latest styles and newest tech, and despite its continued success today’s Q5 is hardly new in any respect.

This current generation dates back to 2008 when it first wowed Beijing auto show goers and then later that year did likewise in LA before going on sale in 2009. That’s six long years with only a minor update in 2012, which introduced new headlamps and taillights, refreshed fascias, updated mechanicals with increased output and efficiency, enhanced infotainment systems and a few interior trim modifications. The revamp obviously did the trick because it’s been the segment’s top-seller ever since and shows no sign of slowing.

Most will agree that the Q5 remains a thoroughly attractive compact to near mid-size crossover ute, done out in Audi’s traditional understated elegance, albeit still fitted with one of the bolder grilles in the luxury sector. Its singleframe design is a stunning piece of vertically slatted brightwork, while its headlamps, albeit simpler in style than more recent Audi designs, are still up-to-date due to LEDs that wrap all the way around. Its edgy LED-enhanced tail lamps are as fresh as anything in the four-ringed fleet, mind you, and I particularly like the classy spindle-thin spokes on my Technik tester’s 19-inch rims. They’re circled by 235/55 rubber, ideal for balancing reasonable comfort with more than adequate performance, while Audi finishes off this example with plenty of tasteful polished aluminum and chromed bits and pieces that included stylish yet beefy aluminum roof rack cross members clamped onto the standard albeit upgraded aluminum-tone roof rails.

If a Q5 so-equipped can’t get you excited about the year’s first snowfall then boarding, downhill or Nordic skiing, snowshoeing, sledding, tubing and/or any number of other winter recreational activities aren’t likely amongst your personal passions, but you can still take satisfaction, let alone have comfort in knowing that you can get just about anywhere you want in as little time as possible aboard a Q5.

First off, all Q5s come standard with the brand’s legendary Quattro all-wheel drive, so getting to your destination is not an issue, even in inclement weather or slippery road conditions. My tester was fitted with the base 16-valve, DOHC, direct-injected and turbocharged 2.0 TFSI powertrain that produces 220 horsepower and 258 lb-ft of torque, a wonderfully efficient yet amply powerful design that creates full twist from as low as 1,500 rpm and maintains it right through to 4,300 rpm, whereas full power can be found from 4,450 to 6,000 rpm, a good range for easy highway passing performance. It’s smooth and quiet for a four too, this at least partially due to how well Audi isolates the Q5’s cabin, which also limits wind and road noise very effectively, while the eight-speed automatic it comes mated to is perfectly configured to the Q5’s personality, delivering quick, responsive shifts whether actuated by hand on the Tiptronic shift lever or left to its own devices, which either way are as smooth as smooth can be.

To this end I can’t think of another compact SUV that provides the Q5’s level of driving refinement whether on city roads or cruising the highway, its ride easily one of, if not the best in its class. I’ve got a feeling this is one of its most popular attributes, because the majority of buyers aren’t purchasing a vehicle in this class for ultimate handling around the Nürburgring Nordschleife, although I’m sure the top-line SQ5 would do quite well on any track. Rather, most are looking for a nice balance of adept road-holding for both enjoyment and safety reasons, plus a compliant ride due to the harshness of road surfaces that pretty well each and every one of us must endure due to the ill state of our cities’ inner and arterial networks.

Yet even on fresh tarmac the Q5 is a dream to pilot, its ride so sublime that it’ll make you wonder if it can handle a curve at all. Your first fast-paced attack on an unsuspecting set of esses will verify the opposite, however, as the Q5 is as capable of slaying apexes as its more firmly sprung competitors, and even more so if that corner is littered with uneven pavement patchwork or worse, unfilled frost heaves or potholes, which is often the case in our country’s colder regions. The Q5’s softer sprung yet fully independent five-link front and trapezoidal-link rear setup, that comes with good suspension travel, keeps all four wheels in more constant contact with the road than a more rigid design can, and I don’t know about you but I find it much easier to rotate a car around a turn quickly when it’s tires aren’t futilely grasping for air.

To that end the German brand’s adept engineers allow you to personally dial in all the comfort or performance you want via the Q5’s standard Audi Drive Select system that features Comfort, Auto, Dynamic and Individual settings, my personal favourite being Dynamic as it delivers a sportier tautness without ever compromising ride quality, at least not noticeably.

All of this performance comes with excellent fuel economy, another 2.0 TFSI attribute. While premium buyers aren’t as concerned about pump savings as those in the mainstream volume sector, most didn’t achieve their success by reckless spending, the smaller 2.0-litre four addressing ever-tightening middle class budgets as well as environmental considerations with a five-cycle EnerGuide rating of 12.0 L/100km city, 8.0 highway and 10.2 combined, partial thanks given to standard kinetic brake-energy recovery and an optional auto start/stop system. For the time being Audi’s VW connection means that the Q5’s 3.0-litre TDI turbo-diesel is temporarily off the market, last year’s version delivering the best highway and combined ratings amongst the 2015 model’s four available powertrains at 7.5 and 8.8 L/100km respectively, whereas its city rating was only a fraction higher than the hybrid’s at 10.0 L/100km, and yes in case you didn’t already know, Audi offers an electrified hybrid version of the Q5 that’s good for 9.8 L/100km city, 7.9 highway and 8.9 combined. Finally, the gasoline-powered 3.0 TFSI is wonderfully quick with a 272-horsepower six capable of shaving almost a second off the Q5’s sprint to 100km/h at only 6.2 seconds compared to the 2.0 TFSI’s 7.1-second dash, while of course using more fuel to do so, whereas the SQ5’s 354-horsepower mill lowers that 100-km/h charge down to 5.3 seconds, although those wanting to upgrade to either direct-injected, supercharged V6-powered model won’t likely care a single iota about fuel economy.

As wonderful as its powertrain is and as refined its chassis, I’ll hazard to guess that the Q5’s many admirers are equally enamoured with its interior. As with all Audis it’s nicely finished, with most surfaces that aren’t treated to leather or a high-end wood, aluminum or metallic trim covered in soft touch pliable plastics including the dash top, instrument panel, and even the sides of the centre stack, not to mention the door uppers front and rear, although some might find the lack of softer synthetics on the lower door panels, lower dash and especially the glove box lid a bit out of premium character. I can overlook this luxury miss because of how well everything fits together, plus the beautiful detail of its gorgeous textured aluminum inlays, the cabin’s mostly high-quality switchgear that fit together tightly across the centre stack and better damped than the slightly wiggly ones around the infotainment controller, plus its smaller but still very good graphic displays that include a colour MID in as-tested Technik trim and a fair-sized infotainment screen across the line, the latter filled with Audi’s excellent, user-friendly Multi Media Interface (MMI) that’s controlled by a particularly handy lower console-mounted rotating dial surrounded by ample feature shortcut buttons.

I should also note that my tester was fitted with a $2,800 Navigation package that adds hard drive-sourced navigation, a rearview camera (that really should be standard), front parking sonar, a DVD player and voice recognition, while my Q5’s upgraded 705-watt, 15-channel, 14-speaker Bang & Olufsen audio system is a steal at only $1,000. You can also get rear seat entertainment for $2,000, adaptive cruise control for $1,700, and rear side-impact airbags for $500, while I particularly like the Q5 done out in its sporty S Line Sport package the endows the entire CUV with a more aggressive appearance, while an even sportier S Line Competition package pushes the performance envelope. You dress up the interior with piano black lacquer inlays or ash hardwood, while a number of additional options are available too.

OK, that’s a longer list of features than I planned to include but I couldn’t help myself, as there’s just so much to like even with the base model. As-tested the 2016 Q5 2.0 TFSI Technik is an ideal mixture of performance and comfort highlighted by exquisitely luxurious detailing that’s combined with purposeful Teutonic minimalism, Audi never going over the top with excess and therefore providing those who like a more subdued take on sport-luxury with a near perfect reflection of sophisticated contemporary taste. Yes, Audi understands today’s compact luxury crossover buyer, even making sure that all safety considerations are met and therefore earning the 2016 Q5 a Top Safety Pick+ rating from the IIHS, so it’ll likely continue to remain ahead in sales as long as it doesn’t deviate from this well-proven formula.