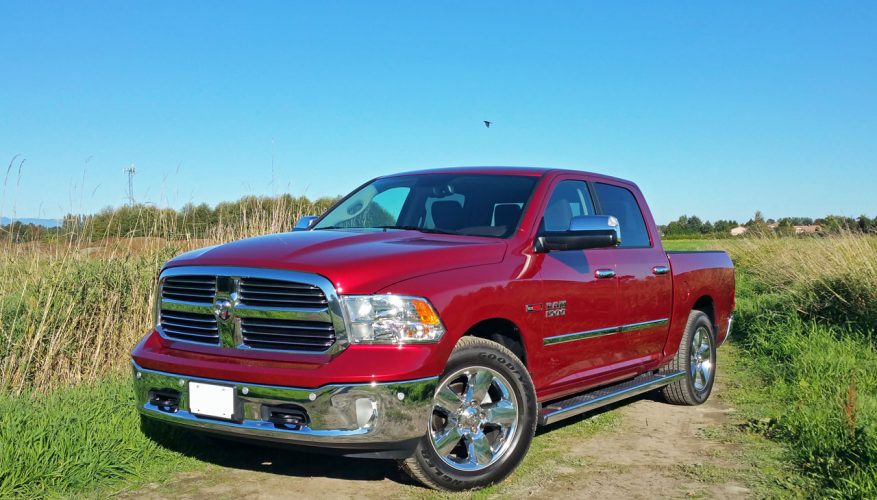 By: Trevor Hofmann
Since Ram adopted the big rig look back in ’93, they’ve been a solid number three instead of a distant third here in Canada, even as recently as calendar year 2014 coming very close to toppling combined Chevrolet Silverado and GMC Sierra sales. Ram missed achieving this feat by a mere 1,484 models, which would be a significant margin if we were comparing Chevy Malibu to Chrysler 200 sales, but in the Canadian half-ton market where the two GM pickups found 90,005 new owners to the Ram 1500’s 88,521 buyers, it was losing by a hair.

The Chrysler 200 ended up 3,409 units in the clear for calendar 2014, incidentally, but with 11,655 200 sales to the Malibu’s 8,246 deliveries you get my point. This is where I’d like to say something witty like, GM had better watch out or Ram’s trucks will soon oust them for second spot overall, but as it is the General’s 6,237 unit lead as of October 2015 is probably too much for Ram to overcome in the next two months. This no doubt comes as a bit of a letdown, especially since Chryco dealers were dancing a jig as recently as July when Ram trucks upset GM for second spot overall, while these 9,545 sales would’ve made them number one in June if they could only swap monthly totals, but alas the stars didn’t align and therefore the Ram division party was more of a few beers after work rather than an all-nighter. Still, the monthly and yearly spreads used to be a lot wider than they are now.

We don’t even need to look back as far as 1994 to recognize how far they’ve come. Since the onset of the following decade with 2004 seeing just 37,709 units, Ram sales have more than doubled, 2014 deliveries up 50,812 units in comparison. While Ford’s seen similar growth in numbers, although not in its percentage of market share, GM only managed 3,954 new per annum buyers for its Silverado and 8,655 for its Sierra since 2004, which shows that Ram is clearly pointed on a more upward trajectory.

What about Toyota Tundra and Nissan Titan sales? Ram averaged more than twice as many trucks in a single month than Nissan managed all year, actually tripling the Japanese manufacturer’s annual number in May 2014, whereas the Tundra is approximately three times more popular than the Titan, while still struggling to pass a mere tenth of yearly Ram truck sales.

Reasons for domestic full-size pickup truck success over dramatically lower Japanese brand sales chart performance point to longevity in the market, brand loyalties being stronger amongst big truck buyers than other automotive segments, and the domestics offering a great deal more body configurations, bed lengths, weight categories including heavy-duty three-quarter and one-ton variants, plus more possible combinations of each as well as more engine options. The differences between the Big 3 truck makers are more finite.

Specific to the domestic half-ton range, with Ram’s 1500 going up against Chevy’s Silverado 1500, GMC’s Sierra 1500 and Ford’s F-150, I believe Ram’s unprecedented growth comes down to many factors. First, Ram has been the segment leader when it comes to styling, its highway rig design hitting a common chord with many buying into the rough, tough trucking image, while over the past decade it’s also led the market in interior refinement and coil-spring ride quality, the brand being first to capitalize on a trend that saw active lifestyle families moving away from traditional cars and even SUVs to much more utile four-door pickups, and meeting that demand with a higher-quality, more comfortable SUV-like experience. Its most recent rush up the sales charts combines these attributes with some impressive engine and drivetrain options, its small block EcoDiesel and eight-speed automatic transmission being market firsts that have had a real impact with buyers.

This is my favourite half-ton powertrain. The 3.0-litre EcoDiesel V6 is a $4,700 option that not only ups towing and hauling performance thanks to 420 lb-ft of torque compared to the Hemi 5.7 V8’s 410, but most importantly improves fuel economy from the 5.7 4×4’s 16.3 L/100km city and 11.5 highway five-cycle EnerGuide rating to a much more livable 12.1 city and 8.8 highway; the same diesel/eight-speed automatic combo good for an even thriftier 11.6 city and 8.4 highway with rear-wheel drive. You can also get the Ram 1500 with an impressive 3.6-litre V6, this engine making 305 horsepower and 269 lb-ft of torque while also mated up to the eight-speed autobox, and when equipped with RWD is capable of 12.9 L/100km city and 9.3 highway, or alternatively 14.6 city and 10.1 highway with AWD. I’m not going to list out all of the various fuel economy ratings possible with this truck, but rather will just say you’re best off with the EcoDiesel if saving money at the pump and/or hauling big loads are critical to your trucking objectives.

Those numbers are hard facts, but styling is a personal thing. You’ll either love the Ram 1500 or your leanings will be toward some other half-ton pickup truck, so rather than talk about this model’s many design details, which truly work for me, I’d rather take you inside where it leads its rivals, especially in lower to mid-grade trims. My tester gets a Big Horn badge on its tailgate, so therefore along with the chrome bumper underneath that matches the chrome bumper up front and brightwork grille just above, the latter infused with fog lamps, while its optional 20-inch five-spoke wheels are finished in highly polished aluminum and visually tied together with chrome side steps, its interior gets upgraded with a leather-wrapped multifunction steering wheel that frames an improved primary instrument package with a seven-inch reconfigurable multi-information display, a universal garage door opener is added overhead, the rearview mirror next to it is auto-dimming, the sunvisors include illuminated vanity mirrors, plus more.

As already mentioned it’s not the sum of the parts that make the Ram so nice, but rather the way everything is put together and quality of materials used. Ram finishes the 1500 with more soft-touch synthetic surfaces than most similarly priced competitors. The dash is hard plastic and so is the instrument panel, but as mentioned Big Horn trim is hardly top of the line. It matters more to me that there’s somewhere comfortable to rest my elbows, and to that end the door uppers are made from a pliable padded rubber where it matters most, even softer than the rubberized armrests.

There was no shortage of extras in my tester, either. The upgraded 10-way powered driver’s seat was amply comfortable while the premium woven cloth upholstery was really attractive, featuring inserts flecked with a black and brown pattern for added visual depth. The rear seat was upgraded to 60/40 split-folding functionality, the lower seat cushions flipping upwards to reveal the expected storage bins below, but their lids unexpectedly infused with heavy-duty plastic-folding feet that, when unfolded and laid out, produced a flat loading floor for stowing large items. My tester also included a handy 115-volt household-style socket, whereas additional options included a heatable steering wheel and front seats, dual-zone auto HVAC, a great sounding Harmon/Kardon audio system, a stunning high-resolution 8.4-inch colour touchscreen infotainment display with a backup camera, ultra-helpful front and rear parking assist, a powered moonroof and more. Altogether my test truck totaled $64,950 plus freight and dealer fees, which is very competitive for its standard and optional features. The base Ram 1500 starts at just $22,095, incidentally, whereas you can get into a Big Horn for as little as $34,495.

All of this luxury makes for a wonderfully comfortable pickup truck, while the coil-sprung Ram 1500 is easily the best riding of its kind. I also find it the most nimble in traffic and on a winding road, while its highway prowess is unflappable. Clearly Ram knows a thing or two about building pickup trucks, this 1500 offering many benefits over any half-ton rival. It only falls short with shorter people like myself, who will struggle to climb up to its bed due to old-style bumper-top steps that don’t provide much of a toehold when the tailgate is lowered. In comparison GM offers nifty corner steps integrated within their trucks’ rear bumpers, while Ford gives the option of a rather pricy and complicated step system that can be pulled out of the tailgate itself, so therefore Ram needs to become as innovative with this truck’s utility as it’s been a leader in powertrains and interior refinement.

Other than these small details, the Ram 1500 remains a style, fuel economy, performance and refinement leader in the half-ton pickup truck class, which is reason enough for its impressive sales momentum to continue.
©(Copyright Canadian Auto Press)
Car Shopping Tools